The city got some relief as DRDO reopened its facility with 250 ICU beds and will add 250 more this week. Work is also on to revive the 10,000-bed Chhatarpur centre. 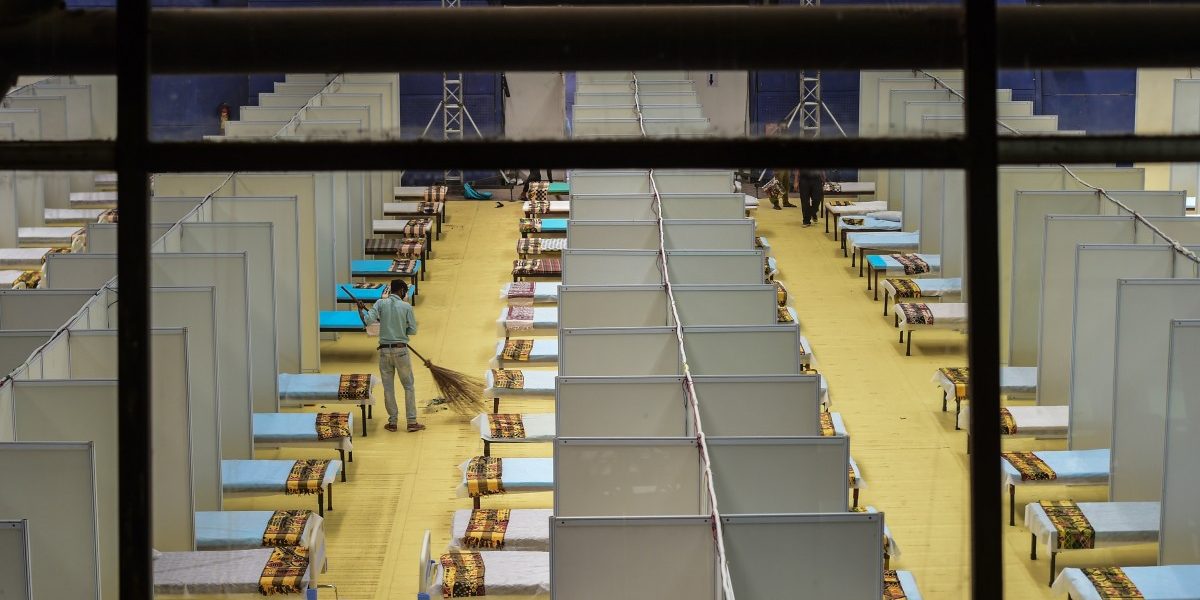 New Delhi: With Delhi and adjoining Uttar Pradesh contributing nearly 20% of India’s new COVID-19 cases on Monday, the demand for hospital beds in the national capital continued to mount. Though the Delhi government’s ‘Delhi Corona’ app said there were 3,241 vacant COVID-19 beds and 51 vacant COVID-19 ICU beds in Delhi in the intervening midnight of April 19-20, thousands of patients continued to struggle to find a hospital bed in Delhi and surrounding satellite townships.

A senior Delhi government doctor, who is in-charge of a West Delhi facility, said, “The situation is so bad that even doctors are struggling to find beds for their close relatives.” Some of the sharp increase in demand for hospital beds in Delhi is from residents of neighbouring states, which too have been witnessing a surge. While a total of 256,828 new cases were reported across India, of these 28,211 were from Uttar Pradesh and 23,686 of Delhi.

There have been complaints that the Delhi Corona app has not been providing accurate figures. People take the app at its word often end up going to hospitals which actually have no beds and so turn the patients away. This also leads to the loss of precious time for patients, most of whom are struggling for breath due to falling oxygen saturation levels and availability of oxygen in their ambulances or vehicles.

Recently, when a resident of Vasundhara, Ghaziabad tried to get a hospital bed for his wife in North East Delhi, he said while the app showed availabilities in GTB Hospital, the hospital authorities denied having a vacant bed. “I finally managed to get her a bed in Atlanta Hospital in Ghaziabad,” he said.

In light of the acute shortage of beds, Delhi chief minister Arvind Kejriwal had a few days ago cautioned hospitals of strict action if they denied beds to patients despite beds being available. He had also urged the Centre to reserve 50% of the beds in the Central government hospitals in Delhi for COVID-19 patients.

One hospital covered by the scheme was Dharamshila in East Delhi, with which Fraiser Suites in Mayur Vihar has been attached. However, when asked if the hospital was in any better position to admit serious COVID-19 patients now, an official said only non-serious cases would be lodged at the Mayur Vihar site. “All the serious cases and those requiring oxygen support will be monitored in the hospital building only.”

In the meantime, Delhi has got a little boost in its efforts to add more COVID-19 beds when the Sardar Vallabhbhai Patel Covid hospital, constructed by the Defence Research and Development Organisation near Terminal I of the Delhi Airport in Delhi Cantonment reopened on Monday with 250 ICU-ventilator beds. The facility, which had first opened in July last year with a capacity of 1,000 beds but later closed on February 18 this year after a dip in arrival of patients, will add 250 more beds by this Thursday.

The DRDO officials said this time the facility would only cater to patients requiring critical care. It has been restored within six days of the Central government issuing directions to the effect. The COVID centre is fully air-conditioned and has been provided with air-filter systems to assist in combating the coronavirus. Around 40 professionals from the Armed Forces Medical Service (AFMS) and two doctors from the Central Armed Police Forces (CAPF) would be deployed at the facility.

In November 2000, when Delhi had seen its third wave of COVID-19, the DRDO facility had attended to a maximum load of 552 patients. But later, as only about 6-7 patients remained in February this year, the Ministry of Home Affairs had decided to wind it up upon their discharge.

Meanwhile, preparations have also started to reopen the largest COVID-19 facility in the country, with 10,200 beds, at the Radha Saomi Satsang Beas complex in Chhattarpur in South Delhi. This complex, which was run by the Indo-Tibetan Border Police last year, measures 1,700 feet by 700 feet, and had been set up last year to cater to the increasing need of hospital beds in Delhi.

The facility, which catered to patients sent from 11 different hospitals, including AIIMS and Safdarjung, was closed earlier this year after there was a sharp fall in COVID-19 cases. To get the facility operational again, the Delhi government has deployed several officials from its Public Works Department at the site. The facility will likely provide major relief to patients coming to Delhi’s hospitals from all over North India.

A Delhi government doctor told The Wire patients are also faced with a huge shortage of essential medicines like Fabiflu, which is being prescribed to most people testing positive, and also Remdevisir, which though can only be administered in a hospital.

Acknowledging that patients and their relatives were struggling to find drugs being prescribed by doctors for fighting the virus, Dhiraj Agarwal, who runs a pharmacy in Ghaziabad, said: “There is an acute shortage of key drugs like Fabiflu, whose 10-day course is being prescribed by doctors.” However, he hoped that the situation might improve later this week. “The stockists are assuring that more supplies are expected soon. At least that is what they are being told by the suppliers.”

As for oxygen supplies, while Kejriwal had also written to Prime Minister Narendra Modi seeking urgent intervention in the wake of dipping availability of oxygen with the hospitals, people who are seeking oxygen supplies at home are now managing to get both the cylinders and concentrators from suppliers in the NCR region.

Some of the medical equipment and pharmaceutical companies have also started diverting their stocks from states where the incidence of COVID-19 is not very high. On social media groups, people are also sharing details of suppliers of key medicines and oxygen which is proving helpful. In the case of oxygen, the removal of restrictions on inter-state transfer has also helped in moving large amounts from suppliers in Noida and Ghaziabad into Delhi.