With Booster Doses, Shots for Children, Will Govt Take a More Pragmatic View on Vaccine Procurement?

We once again face the prospect of there being only one vaccine for our adult booster-dose campaign and one vaccine to vaccinate minors. 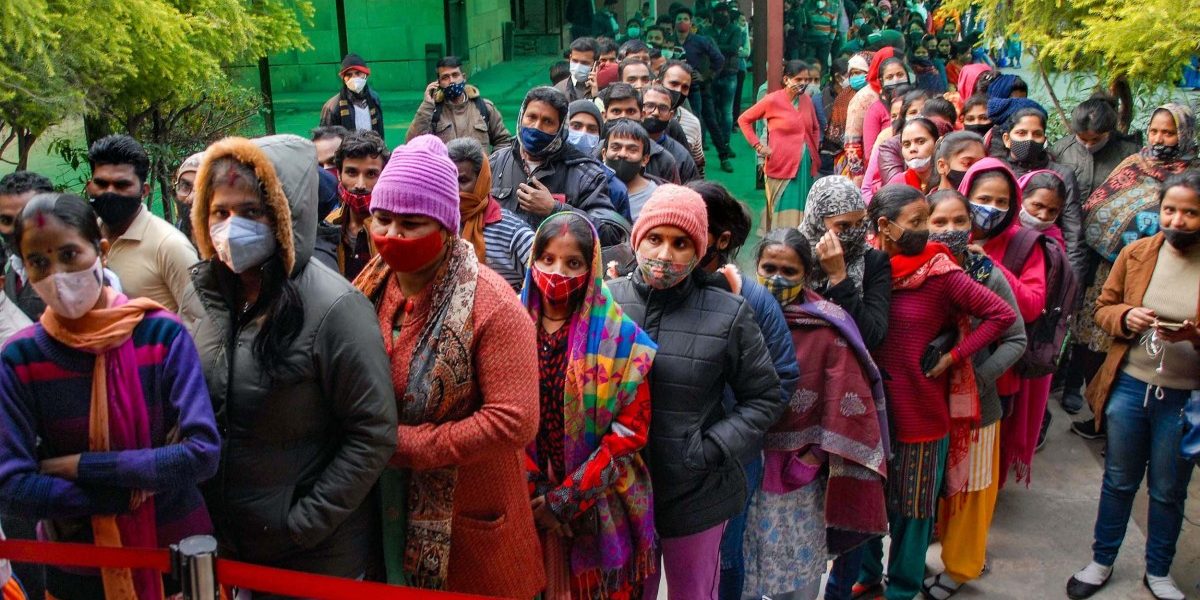 India’s vaccination drive against COVID-19 picked up speed in August and September 2021, after months of shortages. Over 1.45 billion doses had been administered until December 31; 90% of eligible adults have received at least one dose and almost 64% have been fully vaccinated. This is no mean feat.

India is now flush with vaccines, or so it seemed when, in the first week of December, Serum Institute of India (SII) CEO Adar Poonawalla said his company would halve the production of Covishield in the absence of orders from the government.

In fact, the government also permitted exports to resume, and SII has since exported almost 35 million doses.

Although many countries had started vaccinating children and giving booster doses to adults to protect against newer variants of the novel coronavirus – earlier delta and now omicron – the  Indian government had yet to take a call on boosters for adults and vaccines for children until December 23.

Two days later, as has been his wont, and in a surprise announcement, Prime Minister Narendra Modi offered “precaution doses” for healthcare and frontline workers and people older than 60 years with comorbidities from January 10 and vaccines for children aged 15-18 years from January 3, 2022. His speech was short on many details.

The chief characteristic of the COVID-19 vaccination drive has been the country’s overreliance on just one vaccine, Covishield – the AstraZeneca shot manufactured by SII in India. This poses a dilemma as we now deliberate booster doses for adults and shots for children.

About 420 million vaccine doses are still required to fully vaccinate all eligible adults in India against COVID-19.

There are about thirty million healthcare and frontline workers. The population of senior citizens is around 138 million; almost half of them suffer from one or more chronic diseases. So the immediate requirement of booster doses adds up to 100 million.

Almost 89% of the doses administered thus far have been Covishield. Covaxin, jointly developed by the Indian Council of Medical Research and Hyderabad-based Bharat Biotech, accounts for most of the remaining 11%. Sputnik V from Russia is negligible.

The drug regulator had approved the import of the Moderna mRNA vaccine in June but it isn’t yet available in India. Similarly, the Johnson & Johnson vaccine to be manufactured by Biological Evans in India received emergency-use approval a while ago, but there is no clarity yet on supply. Both these vaccines have apparently been held up by the manufacturers’ demand for an indemnity clause in the agreement and the Indian government’s refusal to acquiesce.

On December 23, the Subject Expert Committee (SEC) also rejected SII’s application seeking approval for Covishield as a booster dose, and asked the company to conduct local trials to prove its efficacy as a booster.

On the same day, the SEC asked for more details before considering the use of Corbevax, a protein subunit vaccine developed by Texas Children’s Hospital, Baylor College, Houston, and manufactured by Biological Evans in India, as a booster.

Third, Covovax has received the WHO’s emergency-use approval a week ago and the Indian government has allowed SII to export it to Indonesia. But on 24 December, the Drugs Controller General of India (DCGI) didn’t approve it for domestic use, and sought additional data from the vaccine-maker and also wanted to know if it had been approved for use in the US.

So until Prime Minister Modi’s announcement on December 25, it looked like India was limited to two vaccines and boosters weren’t on the horizon anytime soon – even if many countries were already offering third and, in Israel’s case, fourth doses. Until it wasn’t.

Just three days after the prime minister announced booster doses for adults, and within a week of asking for more data, the DCGI approved Covovax and Corbevax for restricted use in emergency situations in the country.

India now has a basket of four vaccines for adults: Covishield, Covaxin, Covovax and Corbevax. But there’s a catch here.

Covishield should be available in adequate quantities for any needs, though it does have export commitments and hasn’t been approved as a booster yet.

Bharat Biotech has limited production capacity for Covaxin, so it is better reserved for children (more on that below).

SII had started production of Covovax on a small scale in June and has now exported 9 million doses to Indonesia. Presumably, the company will be able to scale up manufacturing, even though it has taken on export commitments for this shot as well.

Corbevax hasn’t been approved as a booster dose. The DCGI has since permitted  Biological Evans to conduct phase 3 trials for Corbevax as a booster dose only among people whose first doses were also of Corbevax. This will obviously take a few months since not a single dose has been administered thus far.

Also read: 10 Questions the Indian Govt Must Answer About Vaccines for Minors and Boosters

Biological Evans reportedly plans to produce about 75 million doses of Corbevax per month, and ramp up to 100 million doses a month by February 2022.

Taken together, there is only one vaccine currently available to use as a booster dose: Covovax.

It is relevant here that there has been a lot of discussion and debate among scientists about mixing vaccines when administering them as boosters (i.e. using Covishield to boost Covaxin recipients, etc.).

However, there isn’t much data available from studies conducted in India for us to say which vaccine is best suited as a booster for which other vaccine – more so since Covishield has been India’s dominant shot.

Virologist and vaccine expert Gagandeep Kang has also said mRNA vaccines may be the best booster doses, based on data from other countries. But India doesn’t yet have any mRNA vaccines.

This is good news, since we do have Covovax, although we have to wait for clearer recommendations the government is expected to issue before booster doses are administered.

Now, 74% of the Indian population is older than 14 years, with about 930 million being older than 18 years. This means the number of children aged 15-18 years – for which the health ministry has approved COVID-19 vaccines – is around 100 million. Assuming they will receive two-dose vaccines as well, India’s immediate requirement for them is 200 million doses.

On the same day the prime minister announced that booster doses and vaccines for children will be rolled out, the DCGI approved Covaxin for those aged 12-18 years. It is currently the only option recipients aged 15-18 years can avail from January 3.

ZyCov-D, a DNA vaccine developed by Gujarat-based Zydus Cadila, received  emergency use approval back in August for everyone older than 12 years (including adults). It is a three-dose vaccine that is administered into the skin with a needle-free applicator. It is likely to be the most expensive shot in India, at Rs 358 a dose.

The government is expected to roll this vaccine out slowly in some states for adults. One reason for the pace is that Zydus Cadila has a limited production capacity, of around 10 million doses per month.

Ergo, the spotlight is once again on Covaxin, which has thus far played a minor role in the COVID-19 vaccination drive for adults. Of the 1.45 billion doses administered, Covaxin makes up only 157 million, chiefly due to Bharat Biotech’s low manufacturing capacity.

The question now is whether the manufacturing capacity of Covaxin has been enhanced adequately to shoulder the new additional task of vaccinating children.

At the height of India’s second COVID-19 outbreak, around April-May this year, Bharat Biotech had shared plans to add capacity at Malur in Karnataka, Ankleshwar in Gujarat and Pune in Maharashtra at its own or its associates’ facilities. The first two commenced production in June; the Pune facility still hadn’t at the time this article was written.

Of the three public limited companies the government roped in in April to make the Covaxin vaccine’s active substance, only one, Indian Immunologicals, Ltd., started supplies in August. Production at the other two, the Haffkine Bio-Pharmaceutical Corp. and Bharat Immunologicals and Biologicals Corp., has been delayed. Even the contracts to upgrade their facilities to BSL3 grade haven’t been finalised yet.

We know neither the actual delivered quantity from the company nor the stock in hand with the various states – so it’s difficult to correctly assess the real production volumes. At the same time, the fact that only 35 million doses of Covaxin were administered in November and December (versus 335 million doses of Covishield), does not inspire confidence.

Earlier this month, minister of state for health Bharati Pravin Pawar informed Rajya Sabha that Bharat Biotech had achieved almost 90% of its capacity to produce 50-60 million doses per month.

Assuming that approximately 45-55 million Covaxin doses will be supplied each month, we will still need at least four months to vaccinate all children aged 15-18 years.

In addition, a quarter of India’s population is younger than 15 years, plus 25 million children are born every year. This translates to approximately 314 million children in the age group 2-15 years, ergo an additional 628 million doses, assuming all children will receive two-dose vaccines.

Bharat Biotech had shared the results from its phase 2/3 trials of Covaxin, conducted at six hospitals with 526 children aged 2-18 years as participants. Its researchers reported the vaccine to be well-tolerated and immunogenic in these children and that it elicited superior antibody responses versus those in adults.

If the government approves Covaxin and expands the vaccination to cover children up to 2 years old, we will need 14 months to vaccinate all children in this age group given the current production capacity of Covaxin. This calculation also assumes Covaxin will neither be used for adults nor exported to other countries.

We don’t know if the government expects any increase in the Covaxin production capacity anytime soon.

It should be obvious by now that the children’s vaccination drive should not depend on Covaxin alone.

The only other vaccines being administered to children up to the age of 5 years in the US and Europe are mRNA vaccines that aren’t yet available in India.

Gennova Biopharmaceuticals, based in Pune, is the only Indian company with an mRNA COVID-19 vaccine in ongoing phase 2/3 trials. Its phase 3 trial has 4,000 participants aged 18-80 years who will receive Covishield as a comparator instead of a placebo. The first results are expected in late January 2022, after which – depending on how good the results are – the company will apply for emergency-use approval.

Gennova also plans to conduct separate trials to evaluate the vaccine as a booster dose and for paediatric use if/when it has been approved. So this vaccine is also a while away.

In sum, Indians still don’t have access to mRNA COVID-19 vaccines, which have thus far been hailed as the best vis-à-vis combating the pandemic, including as booster doses and for paediatric use.

The Indian government’s approach to procuring different vaccines appears to be still hamstrung by the same aatmanirbharta (‘self-dependent’) thinking that prompted former Union health minister Harsh Vardhan to declare in November 2020 that India may not need the Pfizer vaccine.

Our adult vaccination drive has been carried through by just one vaccine, Covishield – which also required the government to temporarily ban exports, which deprived many COVAX-dependent countries of vaccines.

Now, we once again face the prospect of there being only one vaccine for our adult booster-dose campaign, Covovax, manufactured by the same company that makes Covishield. And Covovax also has export commitments.

As for children, the sole option is Covaxin, which hasn’t been able to make much of a mark in the adult vaccination drive. Will Covaxin stand up and be counted now? Or will the government finally take a more pragmatic view in its vaccine procurement? Your guess is as good as mine.