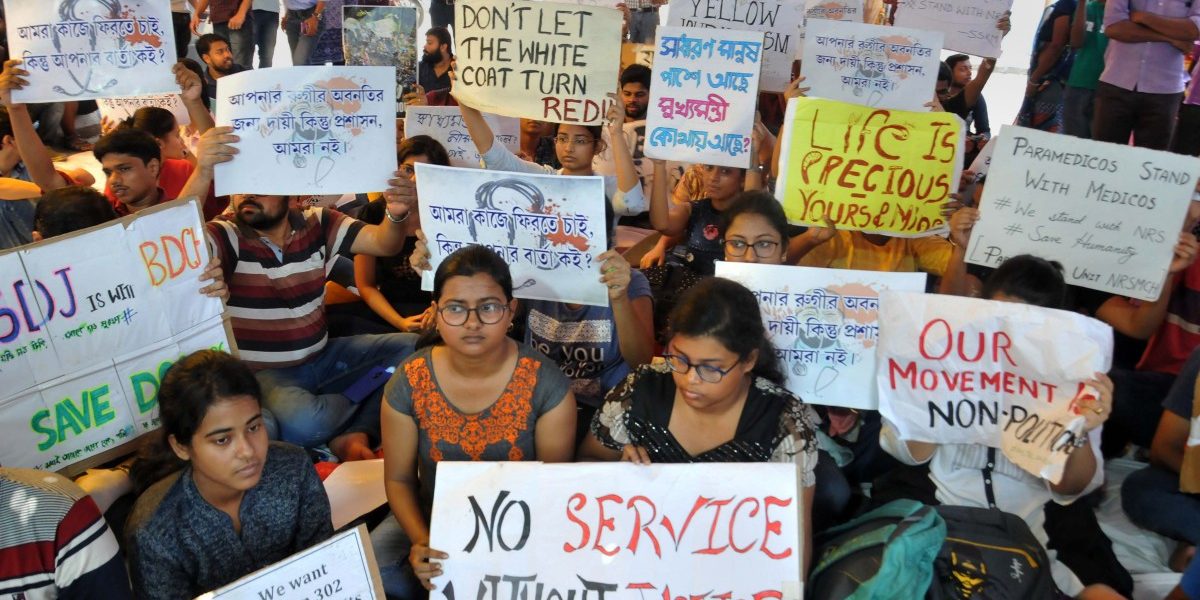 Doctors on strike in Kolkata on Friday. Image: PTI

More so, the doctor’s strike in the state has spread to the rest of the country despite the chief minister’s threats to them to return to work.

“I condemn the agitation. The junior doctors’ strike is a conspiracy by the CPI(M) and the BJP,” said Banerjee to the press.

Mamata yesterday told the doctors to join work within four hours, then extended it. The chief minister threatened them with eviction from their hostels and said the state spends “Rs 25 lakh” per doctor and that this means they cannot “shirk work”.

Banerjee has been reluctant to give the protesting doctors any assurances or take responsibility for law and order, saying instead that it was the Bharatiya Janata Party which was instigating the doctors to strike. She also alleged that the BJP was asking doctors not to treat Muslim patients.

Not only is Banerjee the chief minister, she also holds the state’s health portfolio.

The doctors have defied her ultimatums and continued to strike. The principle and another senior administrator at NRS Medical College, where a doctor was attacked by a mob, have resigned. Sixteen other doctors in West Bengal have also reportedly resigned. They want an unconditional apology from Banerjee and have laid down six conditions to end their protest.

West Bengal: 16 doctors of the RG Kar Medical College & Hospital, Kolkata submit their resignation stating, “In response to prevailing situation as we are unable to provide service, we would like to resign from our duty,” pic.twitter.com/a3eVzs6ZLG

The Union health minister, Harsh Vardhan, has asked Banerjee to withdraw her ultimatum and “not make this a prestige issue”.

I feel very sad that doctors across India had to strike work in protest against atrocities on doctors in W Bengal & consequently patients across India are suffering.I appeal to @Mamtaofficial to withdraw her ultimatum to the medical community & not make this a prestige issue. pic.twitter.com/bSIkVFkrLs

Mamata criticised by relatives of her own party members

Two doctors related to Banerjee’s own party have also condemned her behavior. Abesh Banerjee, who is her nephew, and Shabba Hakim, who is the daughter of the mayor of Kolkata, have criticised her. They said that doctors have a right to peaceful protest as well as safety at work.

Abesh apparently led a protest against the state government and in support of the striking doctors. Hakim posted on Facebook that as a Trinamool supporter she was “ashamed at the inaction and silence of our leaders”.

Banerjee belittled the young doctors as “children” and said they were getting “emotional”.

Well-known filmmaker Aparna Sen joined the protests today and said that she won’t accept any more state awards. There is “no shame in saying sorry,” said Sen.

A petition was filed in the Calcutta high court asking for directions to the doctors to immediately return to work. A division bench has refused to pass this order, instead asking Banerjee to apprise them of what steps she has taken to remedy the situation.

Doctors have been on strike since Tuesday, after members of a family whose 77-year-old relative had died attacked two doctors. Many routine services have been shut in various parts of the country in support of the doctors protesting in West Bengal. Doctors in Maharashtra, Kerala, Andhra Pradesh and Delhi have also staged protests and given support. The Indian Medical Association has been calling for nationwide protests.

Delhi Medical Association, today, has called for a ‘total medical bandh to protest against the assault on doctor of NRS Medical College, Kolkata.’