Bengal's Healthcare Has Become Dysfunctional. Here's How We Can Fix It

The West Bengal government, while outsourcing secondary and tertiary care, has neglected spending on monitoring and evaluation. 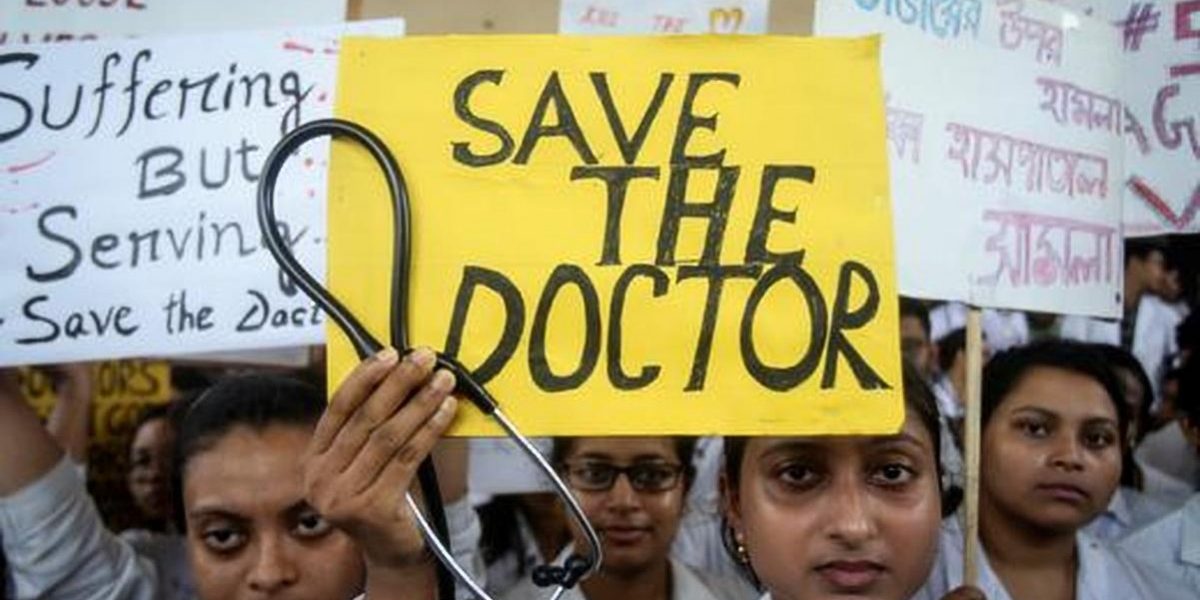 Recent mayhem in West Bengal’s public hospitals, as doctors were on strike for eight days, reflects the larger implosion of the health system of the state.

The incidents that led to the strike are not new in West Bengal or other states of India. Accusing and beating doctors for a mishap during treatment has been common. In this backdrop, it is not unnatural for doctors to demand a sound security system. While politicians squabbled with doctors, the brunt of the whole episode was borne by common citizens whose lives were put at risk in the absence of a functional public health system.

But what are the root causes of the problem and the systemic errors that exist in the health sector? What are the issues that cause this kind of systemic dysfunctionality?

The health sector has been going through a transformative process of becoming a for-profit private sector in India for quite some time now. Public expenditure on health is abysmally low. It made up around 1.4% of the GDP in India in 2017-18, a figure which is much lower than in neighbouring countries like China (3%) and Sri Lanka (2%).

Per Capita Public Expenditure on Health in West Bengal from 2014-15 to 2019-20, in 2012 prices.
Source: Budget Documents, government of West Bengal, various years.

Thus, it naturally follows that the state of public health infrastructure has remained very poor in West Bengal. Health centres all over the state are short of resources, especially human resources as no much effort has been put into building the health workforce’s capacities.

Extent of increase in the total state Budget and state health Budget in West Bengal from 2014-15 to 2019-20. Source: Budget Documents, government of West Bengal, various years.

The condition of health infrastructure is even worse in rural areas, even though almost 70% of the state’s population belongs to those areas. Nearly 12,310 sub centres in West Bengal are currently running on a shortfall. As many as 1,870 sub centres have been functioning out of rented buildings. There is need of as many as 349 surgeons, 320 paediatrician and 297 gynaecologists at community health centres in Bengal.

Doctor and bed population ratios were 1:10411 and 1:1170 respectively in West Bengal, according to 2018 government data.

Quite obviously, doctors are overburdened at public hospitals. In addition, they are not provided with modern equipment for facilitating services, and the security system is demonstrably not good enough to protect them from public outrage if anything goes wrong.

When one looks into the matter from a common person’s perspective, it is not hard to understand the hassles an individual goes through while seeking treatment from public healthcare facilities. Long waiting time and poor quality of services (due to infrastructural bottlenecks and human resource shortages) are very common at public hospitals. Additionally, the introduction of user fees at public hospitals has worsened the situation.

The Central government, meanwhile, emphasises the involvement of private providers to bridge the gaps that exist in the health sector. To that end, the public private partnership mode is thought to be a step towards ensuring universal coverage.

Most of states have outsourced several services to the private sector. West Bengal has outsourced secondary and tertiary care, diagnostics, dialysis of patients, ambulance, catering and laundry services to private partners.

These private partners, it has been argued, charge higher prices for rendering services. Therefore, healthcare no longer remains a publicly provided good. It becomes like any other commodity sold in the market and can be consumed only if the buyer has the willingness and ability to pay for it.

Also read: What Hospitals Can Do to Curb Attacks on Resident Doctors

It is not even as if with the commodification of healthcare, the quality of services has improved much. In the absence of a grievance redressal mechanism at hospitals, the poor often feel unheard.

Here, the West Bengal government has neglected spending on monitoring and evaluation.

Therefore, there is no mechanism to hold public health management or private partners accountable. This also means that the democratic processes that could have enhanced accountability in the system are by and large neglected by public as well as private management in health care. The obvious outcome is that people take the law into their own hands to ensure justice.

In the present outbreak, both the parties can be considered victims of systemic loopholes. While doctors and patients must stand in solidarity against a system which has done them wrong, the state must also introspect and reverse the mistakes made in the past to restore social, physical and mental well-being of its citizens.

Mampi Bose is a policy analyst at the Centre for Budget and Governance Accountability, New Delhi. She can be reached at bose786@gmail.com.