The WHO Chief Scientist has said that it is possible that we will continue like this with local but not severe ups and downs. The Chief Scientist of the World Health Organisation has said, “India could have reached some sort of stage of endemicity” in terms of the overall COVID-19 situation. “That’s what seems to be happening,” said Dr Soumya Swaminathan.

“It’s very feasible we may continue like this with a few local ups and downs” but they are unlikely to be severe and certainly not like the devastating second wave of April-May. The endemic stage is when a population learns to live with a virus. It’s very different to the epidemic stage when the virus overwhelms a population.

The latest seven-day average of daily cases is now under 32,000, a fall of 12% compared to the week before. The R number is said to be 0.9. This is very different to earlier weeks when cases were plateauing at 40,000 a day and the R number had crossed 1.1.

Dr Swaminathan also said she expects the WHO to clear Covaxin as one of its authorised vaccines by mid-September. She said the decision would be taken by an independent assessment committee that will meet in the first 10 days of the month. She also said one cause of delay was that Bharat Biotech “took time to compile its dossier” which was only submitted to the WHO in the third week of July.

In mid-August, the committee raised further questions to which Bharat Biotech has recently responded. The committee will review the matter in early September and, therefore, she expects an announcement by mid-September. She added the process has not been unusually long or delayed.


In a 43-minute interview to Karan Thapar for The Wire, Dr Swaminathan, a former Director General of the ICMR, said, “No one has a crystal ball and it’s impossible to predict a third wave”.

One cannot say with any certainty when, where and how bad a third wave will be. “All one can do is make an informed guess.” Swaminathan’s viewpoint suggests that India could experience local or regional ups and downs but its unlikely to see a nationwide third wave similar to the second wave.

In The Wire interview, Swaminathan said while it is possible that children could get infected in a third wave in large numbers it is very unlikely that they will fall seriously ill. She specifically said there is no need to panic on this score although it’s advisable to be prepared for more infections in children.

Speaking about Kerala, Swaminathan said there is definitely “on-going transmission” in the state and that raises the fear of new variants emerging but Kerala has also “managed cases very well.” She said case fatality in Kerala was the lowest in the country. However, she added, Kerala needs to step-up vaccinations even though it has one of the best vaccination ratios in the country.

Questioned about news reports that the government plans to stockpile Remdesivir and Ivermectin to prepare for a third wave, two medicines the WHO has publicly and unequivocally said “do not have any role to play in reducing infections and mortality”, Swaminathan repeated the WHO position that neither medicine is useful. In November 2020, the WHO said: “WHO recommends against use of Remdesivir in Covid 19…as there is currently no evidence that Remdesivir improves survival and other outcomes.”

Also read: What Next for the Delta Variant?

In May 2021 Swaminathan herself tweeted: “WHO recommends against the use of Ivermectin for Covid 19 except within clinical trials”.

However Swaminathan would not comment on the Indian government’s decision to stockpile both medicines despite this guidance from the WHO.

Asked by The Wire at what percentage level of adult vaccination India could start to feel reasonably secure and start to open up as Britain has done – given that it is widely considered unlikely that India will achieve the government’s target of fully vaccinating the adult population by the end of the year – Swaminathan said that at UK levels of adult vaccination, i.e. 70-75%, India could feel reasonably secure. At the moment only 13.7% of the adult population is fully vaccinated. 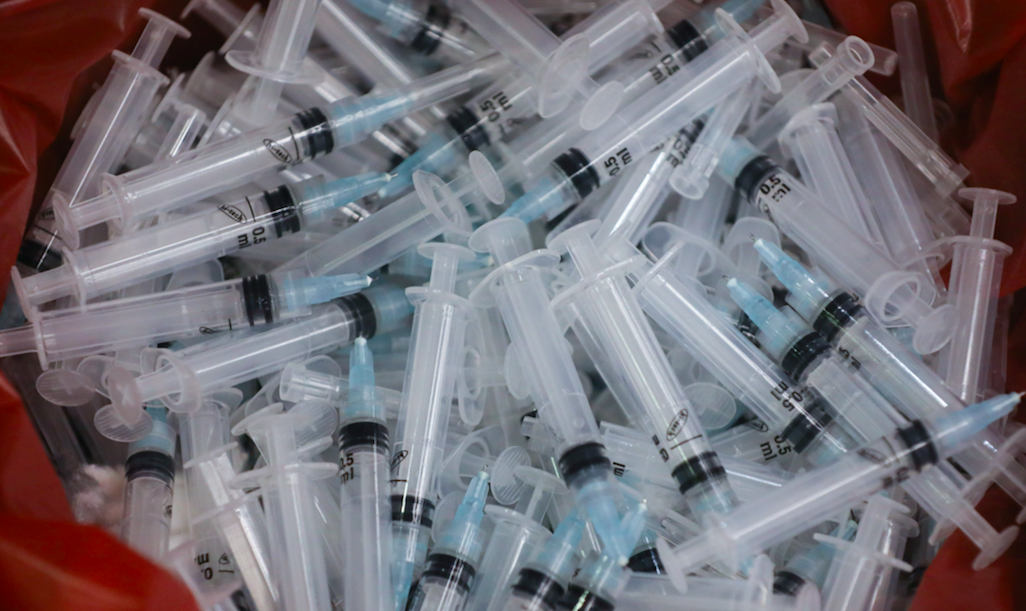 Used syringes lie discarded in a bin after they were used to administer the coronavirus disease (COVID-19) vaccine in Mumbai, India, August 11, 2021. Photo: Reuters/Francis Mascarenhas

Swaminathan said we need to be given the full phase 3 trial results of the Zydus Cadila vaccine and not just the 66% efficacy figure. Specifically, we need to know the confidence bands within which the 66% figure sits because only then can we judge its credibility.

Speaking about booster doses, Swaminathan said, as yet, we don’t have data that suggests the need for booster doses. It is only when such data is available that we can decide what sort of people need boosters and when they should be given. She said countries like UK, US, Israel and even France and Germany were going ahead with boosters because they feared immunity levels after vaccination were dropping but the WHO’s position is to wait for proper data before you decide.

Swaminathan said there is also a moral argument against giving booster doses to people who are already fully vaccinated. When the vast majority of the world has not received a single dose, it is wrong for rich countries to keep using vaccines on their own population and disregard everyone else.

She further pointed out that if infections continue to spread amongst the world’s unvaccinated majority new and more dangerous variants could emerge and they could have a devastating impact on the vaccinated populations of Europe and America. No one is safe till everyone is safe, she said, and so it’s in the interest of rich nations to ensure vaccinations are given to every country.

Finally, Swaminathan said she agreed with the view that the most likely outcome is that COVID-19 will convert from its present epidemic status to endemic status, helped by vaccinations and COVID-19 appropriate behaviour, and in a year or so it will be no greater a threat than influenza. She told The Wire that she hoped the world could reach this stage in a year and half or so, i.e. by the end of 2022.

She added, “We cannot reasonably hope to eliminate or eradicate the virus,” but once it becomes endemic we can learn to live with it.