The top court made several important observations in the suo motu case on managing COVID-19, asking the Centre why the Rs 35,000 crore allocated in the budget to buy vaccines cannot be used to provide jabs for free.

New Delhi: The Supreme Court has said that courts cannot be “silent spectators” when the constitutional rights of citizens are infringed by executive policies, slamming the Centre’s COVID-19 vaccination policy, which it described as “prima facie arbitrary and irrational” and ordering a review.

The top court questioned the Centre’s policy of arranging free COVID-19 vaccines for citizens above the age of 45, healthcare workers and frontline workers while asking those between the ages of 18-44 to pay for the vaccination.

This was part of many crucial observations made by a special bench of Justices D.Y. Chandrachud, L.N. Rao and S. Ravindra Bhat in the Supreme Court’s suo motu case on the management of COVID-19. The apex court’s May 31 order was uploaded on Wednesday, June 2, to its website.

The court sought to scrutinise the country’s COVID-19 vaccination policy in detail, asking the Centre to provide information on how the Rs 35,000 crore that was earmarked for vaccines in the Union Budget has been spent so far. The Centre was asked to place on record all relevant documents and file notings reflecting its thinking culminating in the policy.

The bench was also critical of the Centre’s decisions on liberalised vaccination policy; differential pricing of vaccines for Centre, states and private hospitals; the basis of such a norm; and mandatory registration on the Co-WIN portal to book slots for jabs, citing the ‘huge digital divide’ between rural and urban India. The government was asked to respond to the court’s queries in two weeks.

The apex court said that in grappling with the second wave of COVID-19, it does not intend to “second-guess the wisdom of the executive when it chooses between two competing and efficacious policy measures”.

The court, however, added that it will continue to exercise jurisdiction to determine “if the chosen policy conforms to the standards of reasonableness, militates against manifest arbitrariness and protects the right to life of all persons”.

“Constitution does not envisage courts to be silent spectators when constitutional rights of citizens are infringed by executive policies”, the bench said in its order in a hard hitting response to the Centre’s submissions in an affidavit that the judiciary should not enter into the policy making domain.

The Union Budget for financial year 2021-2022 had earmarked Rs 35,000 crore for procuring vaccines. “In light of the liberalised vaccination policy, the Central government is directed to clarify how these funds have been spent so far and why they cannot be utilised for vaccinating persons aged 18-44 years,” the bench said.

“We direct the Union of India(UoI) to undertake a fresh review of its vaccination policy addressing the concerns raised,” said the order.

The apex court also questioned the Centre’s justification that the pricing policy of vaccines has been framed to facilitate competitive pricing, which will incentivise more private manufacturers.

The bench held that the only room for negotiation with the two vaccine manufacturers could have been on vaccine price and quantity of vaccines that can be made available to the buyers, but both of these had already been fixed by the Centre’s liberalised vaccination policy. This, the court held, belied the justification that the high prices will facilitate competition and incentivise more manufacturers.

“Furthermore, the Central government justifying its lower prices on account of its ability to place large purchase orders for vaccines, raises the issue as to why this rationale is not being employed for acquiring 100% of the monthly CDL doses?” the Supreme Court asked.

The liberalised vaccination policy, unlike the earlier one, did not prioritise persons with comorbidities and “this became important in view of the fact that in the second wave, persons between 18-44 years of age have suffered severe effects of infection including deaths in unfortunate cases”, the court said.

“Due to the changing nature of the pandemic, we are now faced with a situation where the 18-44 age group also needs to be vaccinated, although priority may be retained between different age groups on a scientific basis. 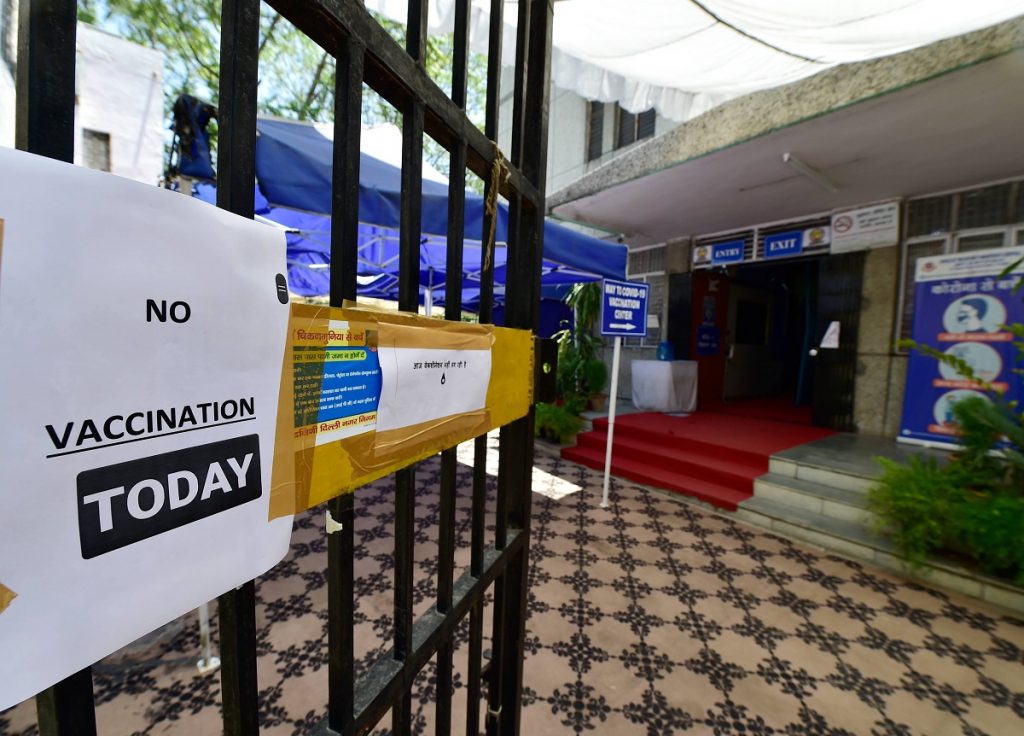 “Hence, due to the importance of vaccinating individuals in the 18-44 age group, the policy of the Central Government for conducting free vaccination themselves for groups under the first 2 phases, and replacing it with paid vaccination by the State/UT Governments and private hospitals for the persons between 18-44 years is, prima facie, arbitrary and irrational,” Justice Chandrachud said in the 32-page order. Healthcare workers, frontline workers and those above 45 years were vaccinated under the first two phases.

The court asked the Centre to provide the data on the percentage of population that has been vaccinated (with one dose and both doses), as against eligible persons in the first three phases of the vaccination drive.

The bench also sought complete data of the Centre’s purchase history of all the COVID-19 vaccines – Covaxin, Covishield and Sputnik V – till date.

“The data should clarify: (a) the dates of all procurement orders placed by the Central Government for all 3 vaccines; (b) the quantity of vaccines ordered as on each date; and (c) the projected date of supply; and an outline for how and when the Central Government seeks to vaccinate the remaining population in phases 1, 2 and 3,” the court said.

The top court has sought information on the steps being taken by the Centre to ensure drugs are available to treat mucormycosis, which is also called black fungus infection.

Taking note of the Centre’s reply that states and UTs will provide vaccination free of cost to its population, the court said it is important that individual states and UTs may confirm or deny this position before the court.

“Further, if they have decided to vaccinate their population for free then, as a matter of principle, it is important that this policy is annexed to their affidavit, so that the population within their territories can be assured of their right to be vaccinated for free at a state vaccination centre.

“Hence, we direct each of the State/UT Governments to also file an affidavit within 2 weeks, where they shall clarify their position and put on record their individual policies,” the bench said.

The bench informed the Centre that its affidavit should respond individually to each issue mentioned in the order. 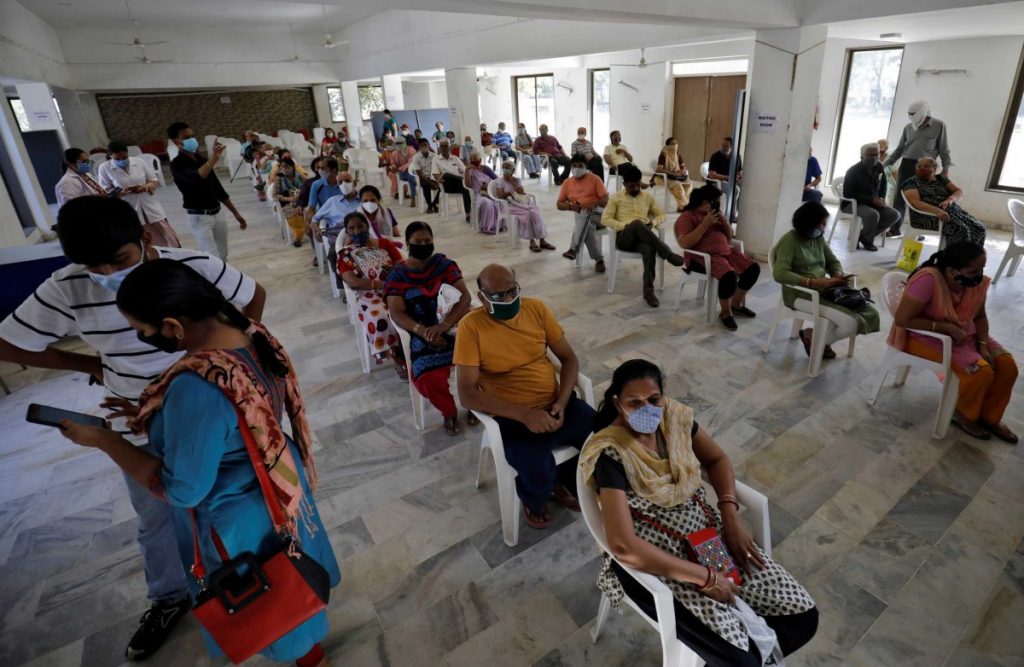 People sit in a waiting area to receive a dose of the Covishield vaccine at a vaccination centre in Ahmedabad, April 2, 2021. Photo: Reuters/Amit Dave

Trashing the Centre’s objection that judiciary should not enter into the policy making domain, the bench said it is trite to state that separation of powers is a part of the basic structure of the constitution and policy-making continues to be in the sole domain of the executive.

“The judiciary does not possess the authority or competence to assume the role of the executive, which is democratically accountable for its actions and has access to the resources which are instrumental to policy formulation. However, this separation of powers does not result in courts lacking jurisdiction in conducting a judicial review of these policies.

“Our constitution does not envisage courts to be silent spectators when constitutional rights of citizens are infringed by executive policies. Judicial review and soliciting constitutional justification for policies formulated by the executive is an essential function, which the courts are entrusted to perform,” the order says.

The top court asked the Centre to clarify its stand on the roadmap of the projected availability of vaccines till December 31, 2021, the preparedness with respect to specific needs of children in the event of a third wave, vaccination trials and regulatory approval, and compatible drugs.

It has sought information whether under the Centre’s policy, it is permissible for the states and UTs or individual local bodies to access vaccine supplies of foreign manufacturers.

The court also sought numbers of crematorium workers vaccinated in phase one and asked whether a targeted drive can be conducted for vaccination of the remaining workers in this category.

LiveLaw notes that the Supreme Court also made another significant observation that the policy of the Centre to not provide free vaccination for those between 18 and 44 years is “prima facie arbitrary and irrational.”