'Health for All' as a Political Question

A recent public debate on universal and basic healthcare in West Bengal highlighted specific aspects of the politics surrounding it. 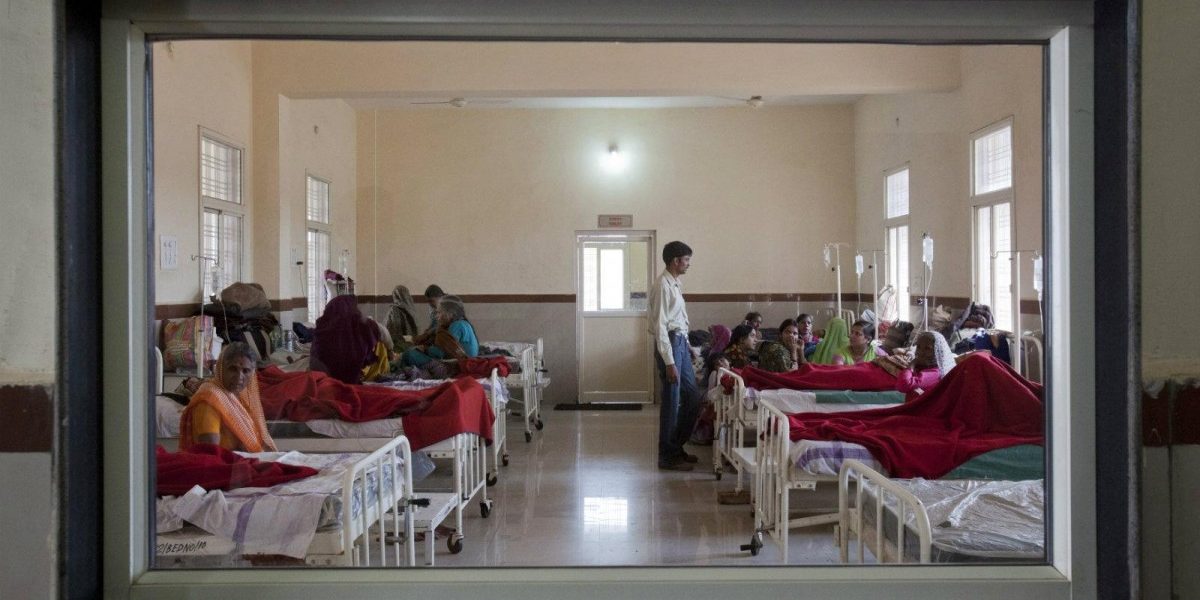 Is the best our democracy can offer is negligible care delivered in a rather uncaring manner? Photo: Reuters

In a recent public discussion on universal and basic healthcare, several sections of the ‘public’ came together from various districts of West Bengal to highlight the need to both defend publicly provided basic healthcare for all and demand major improvements in its reach, quality and equity aims.

The event was organised by Pratichi (India) Trust in association with Daktarder Jukto Mancha (A Doctors’ Forum).

That the healthcare sector, including primary care, is already highly privatised in most parts of India is old news. And it is privatised in two related but distinct senses: one, such care is marketed for profit; and two, availing of such pricey protection is primarily considered a private burden.

This individual-responsibility view goes against the lessons from the global history of universal healthcare, premised upon the notion that individual right to primary healthcare is quintessentially a social obligation. Recent turns in health policy priorities in the country are in favour of health insurance coverage and related non-primary care. They bear a clear risk of diverting our attention away from the value of public provisioning of primary care to withstand the pressure of what Amartya Sen describes as ‘premature privatisation’ of the health system and primary care in India.

The health assembly was organised to bend the arc of our discussion on health in favour of ‘publicisation’ and even ‘politicisation’ of basic healthcare.

Politicisation is commonly viewed as a pejorative term. Yet, basic healthcare, and for that matter most social policies that intend to enhance core human capabilities, are not just affairs involving specialists, professionals and technocrats, but are fundamentally a matter of democratic politics, an outcome of jostling of political forces that either enhance or enervate social justice.

The de-politicisation of the subject matter of healthcare and its hushed presence in electoral politics in many, though not all, regions of India is a major part of the problem. Hence, centreing primary healthcare in the agenda of democratic debate and drawing the ‘public’ to voice their citizenly expectations, experiences and obligations regarding their basic healthcare needs were the central motivation underlying this meeting.

The public, of course, is internally varied, comprising various sections of society. This gathering was peopled mostly with those caregivers and care seekers who are consigned to the periphery, either within the health system or in the society at large, whose voice must count but are routinely discounted. More precisely, the participants included local and community level health workers such as accredited social health activists (ASHAs) and auxiliary nurse midwives, local health officials, anganwadi workers and their supervisors, primary schoolteachers, local doctors, local education officials and above all, the people who themselves avail of public health facilities.

Keeping in mind the well-documented synergy between education and health, special attention was paid to the role and collaboration of health workers and schoolteachers in improving health.

Hence, participation from primary schoolteachers and community level health workers was actively sought. This attempt at debating together was to shape and improve collective understanding about how best to ensure basic well-being in an equitable manner.

Evidence, of course, is a fraught subject. Historically, statistics grew as ‘political arithmetic’ of the government in power. In our times also, on several occasions, the so-called facts appear to be manufactured or manipulated to serve narrow but powerful interests. However, a way out of ‘bad’ evidence is better evidence.

In the forum under discussion, there took place a candid, critical and yet constructive discussion on the gathering of nutritional and other data on basic health, and its authenticity. It was enriched by first-hand observations of the very people who have been put in charge by the system to painstakingly amass such information at the grassroots and yet not necessarily encouraged to reflect on them as an expert group.

Some participants presented, with much clarity and grasp, details of an on-going, long-term, health and demographic survey that is underway. Many of these local surveyors, from local communities and having knowledge of local culture, language and food and health habits, effectively interact with the people from whom they gather vital data on basic health parameters, draw them into focused discussions on socio-economic conditions, mental health issues, difficulties during adolescence and problems of substance abuse and so on.

Data-gathering, in this process, acquires an element of ‘immersed and iterative research’ whereby both the surveyors and those surveyed become more aware and informed about the import of facts and figures. In short, it seems to irrigate a public culture of gathering, sifting, probing and analysing health-related data, not only for official use but for public discussion, understanding and even mobilisation, aiming to improve people’s health. Simultaneously, such participatory data collection projects appear to also professionalise the community health worker cadre.

Sharing experience: Of anguish and empathy

Exchange of experience vis-a-vis various (health) scheme related operational issues was a building block of this public conversation, as many of the participants are well-informed about such micro-level details. Their felt needs ranged from improving primary care infrastructure in a big way to addressing huge staff shortage to acknowledging their role and contribution within the health system. Such narratives of discontent were well-balanced by counter-accounts of empathy and attainment.

The rickety condition of the primary health infrastructure and its skeletal staff strength came up repeatedly in the discussion. Also, candid discussion on nested corruption within the health system shed light on those aspects of the implementation process that call out for urgent public scrutiny and action.

A number of participants explained how they appreciate and empathise with the predicament of the people who run from one department of the hospital to another seeking help but feeling lost in an alien world, finding it difficult to follow the language of signboards and other instructions that is beyond their comprehension. Language, therefore, constitutes a critical element of service provisioning, as many participants observed – not only for simple communication of dos and don’ts but as a matter of social bonding, trust and confidence.

The forum also aimed to look at the extant healthcare structure and its services from the point of view of the users, that is to say, the people. A participant, who sends her child to an anganwadi centre and finds it quite beneficial for her daughter, however, makes a comment about the measly character of the centre thus: “The centre premises are not hygienic, being infested with dogs. This place is not suitable for feeding children. This place is no different from the squalid surroundings of where we live”.

The question that springs up from such observations is whether facilities meant for the poor are bound to be poor facilities and whether the best that our democracy can offer is negligible care delivered in a rather uncaring manner.

‘Health for all’ as a political question

The idea behind the forum was thus to promote a democratic discursive space that can adequately underscore the political and value-laden nature of healthcare policies. In essence, this assembly brought out three specific aspects of the politics of healthcare.

One, there is a clear need to reclaim ‘a preventive and promotive healthcare orientation’ in the policy approach and funding priorities, in contrast to the increasingly growing focus on sheer ‘hospitalisation care’ through a market route.

Three, the wit and wisdom of the local health workers, and their professionalism and social justice activism, need to be seen as vital elements of a political project of universal and affordable basic healthcare.

Manabi Majumdar teaches at the Centre for Studies in Social Sciences, Calcutta (within the fold of the ICSSR, New Delhi).