COVID-19 in India: Has Window of Opportunity Opened by Dip in Daily Growth Rates Closed?

The daily growth rate of case counts had been declining over the past week and should have led to greater pubic health interventions rather than almost exclusive reliance on enforced social distancing. A municipal worker sprays disinfectant on migrant workers before they board a bus to return to their villages, during a 21-day nationwide lockdown to slow the spread of coronavirus disease (COVID-19), in Lucknow, India, March 30, 2020. REUTERS/Pawan Kumar

Like many countries in the world, India is facing a public health crisis of unprecedented proportions. The COVID-19 pandemic caused by a novel coronavirus, SARS-Cov-2, is unlikely to leave India unscathed. Absent adequate and timely public health interventions, it will lead to a very large number of avoidable deaths – like the tragedies unfolding in Italy, Spain, Iran, France, and rapidly engulfing the United States.

The nature of the pandemic dictates, at this stage of its evolution, drastic public health interventions to contain its effect. Till the time a vaccine is widely available, which is likely to take about several months, a key component of public health interventions will necessarily involve various forms of ‘physical distancing’ in society – often referred to as ‘social distancing’.

By its very nature, ‘physical distancing’ will necessarily trigger a negative income shock of equally massive proportions. Workers will be forced to stay away from work, production and transportation will fall, and output and incomes will plummet. Absent adequate and timely economic and social policy interventions, the economic shock will lead to unprecedented material deprivation for the poor and vulnerable – as is highlighted by the heart-rending stories of migrant workers that are emerging from across the country right now. It is morally and politically imperative that counteracting economic and social policies are implemented to cushion the negative income effect on the poor and vulnerable.

Equally importantly, the effectiveness and sustainability of the public health interventions, including ‘physical distancing’ in society, will themselves depend on supportive social and economic policy interventions. The challenge facing the Indian government, as also governments across the world, today is to craft and quickly implement a set of policies that encompass, at one and the same time, public health and economic aspects. A comprehensive set of policies that deal with both aspects of the issue in India can be found in statements and reports released by the Jan Swasthya Abhiyan and the All India Peoples Science Network.

An important part of the response to the epidemic will be information dissemination and informed discussions of policy options among the larger public, including the monitoring of the government’s response by civil society organisations.

To facilitate this process, I present some basic information related to the COVID-19 outbreak in India in the form of a few charts. The source of data for these charts is the Coronavirus Visual Dashboard operated by the Johns Hopkins University Center for Systems Science and Engineering (JHU CSSE). I hope to update the charts every few days so that the information can be used to track the COVID-19 outbreak in India.

I present information from March 9 onwards because that is the date when community transmission might have started. The first case of COVID-19 was reported in India on January 30, 2020; there was a spurt of confirmed cases on March 4, and the total number of confirmed cases crossed 50 on March 9.  Some recent studies have revealed that for every confirmed case, there is likely to be 7 undetected cases. Since India lags far behind other countries in terms of testing, this is likely to be especially true. 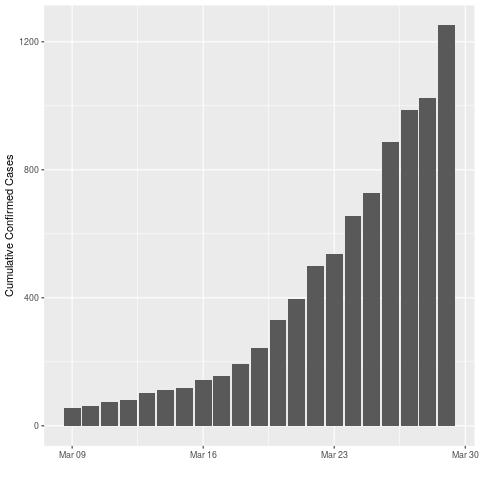 Figure 2 plots the daily number of confirmed cases since March 8. It is the cumulative sums of these daily cases which is shown in Figure 1. For the first 10 days since March 9, the number of daily cases was always below 50. On the 11th day, i.e. March 19, 50 cases were confirmed. Since then, 50 or more cases have been confirmed every day, other than the 15th day, i.e. March 23. There have been four days when 100 or more cases were confirmed. On March 29, the daily case count of confirmed crossed the 200 mark for the first time. 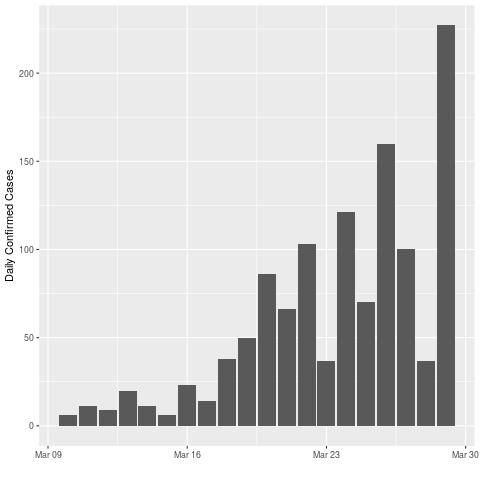 Figure 3 shows that the daily growth rate, i.e. day-over-day growth rate of the number of confirmed cases, has been generally higher than 10 percent. The daily growth rate fluctuates a lot, sometimes falling below 10% and on other days rising above 30%. To get a sense of some trend, we look at the 5-day moving average of the daily growth rate (shown on Figure 3 with a dashed line). The dashed line shows an upward trend for the first 14 days since March 8th.  Since then it had been slowly declining till March 28. The declining trend seems to have been halted on March 29. 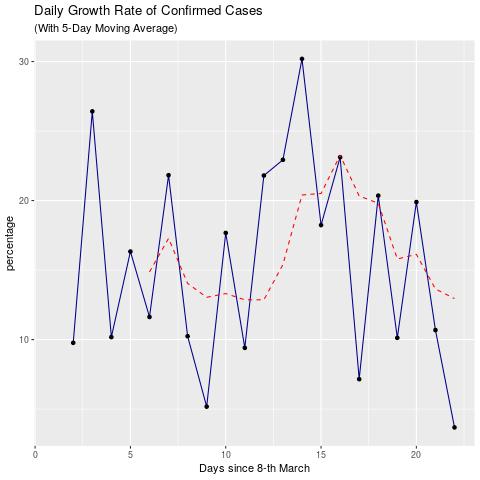 Some ministers and officials of the government have highlighted the downward trend in the daily growth rate of confirmed cases, and that is what Figure 3 shows. While this can provide grounds for guarded optimism, three serious caveats need to be kept in mind.

First, according to data released on the website of the ICMR, India had tested 14,514 cases till March 20. The number of tests have increased to 27,688 by March 27, and further to 38,442 by March 29. These numbers are woefully short of what has been recommended by epidemiologists and public health professionals. If the total number of cases (detected + undetected) have been growing faster than the rate at which testing is increasing in India, then the testing procedure might be detecting a smaller fraction of the actually growth in case count. If this is the case, then the growth rate seen in Figure 3 might be completely misleading.

Second, even at its lower value, a daily growth rate of 10% should not be taken lightly. It implies a doubling of cases in about 7.3 days – if, on the contrary, the daily growth rate was at the higher end, i.e. 30%, then the case count would double every 2.6 days. Thus, even if the daily growth rate has been declining and indicates that the social distancing measures that have been adopted since March 12 – travel bans, closure of public gatherings, suspension of visas other than for diplomatic staff and international bodies, the lockdown – are slowing down the spread of the epidemic, at least temporarily, these do not offer any grounds for complacency.

Third, and most importantly, the declining trend in daily growth rates seems to have been halted. In fact, it might very well have started an upward trajectory since March 29 – as would be consistent with community transmission of the virus.

The temporary slowing down should have been used to increase testing, isolating known cases, contact tracing, facilitating humane quarantines, and ramping up the production and supply of medical equipment, protective gear for medical personnel and first responders, ICU beds and staff that will undoubtedly be needed in the coming weeks and months.

Without doing this, the window of opportunity that had possibly been opened up by social distancing and lockdown – at enormous cost to the poor and vulnerable – will have been wasted.

Social distancing and lockdowns can only slow down the spread of the epidemic, they cannot stop it. Sophisticated epidemiological models show that once the lockdown is lifted, as it must be, and once social distancing measures are loosened, as would probably need to be done in a few weeks, the number of cases can rapidly rise again. Is India already at that point? Has the window of opportunity already closed down?