Three Cases of Omicron Subvariant BF.7 Have Been Detected in India So Far

"The BF.7's high transmissibility in China might be attributed to a low level of immunity in the Chinese population from the previous infection and possibly vaccination too," an official source said. 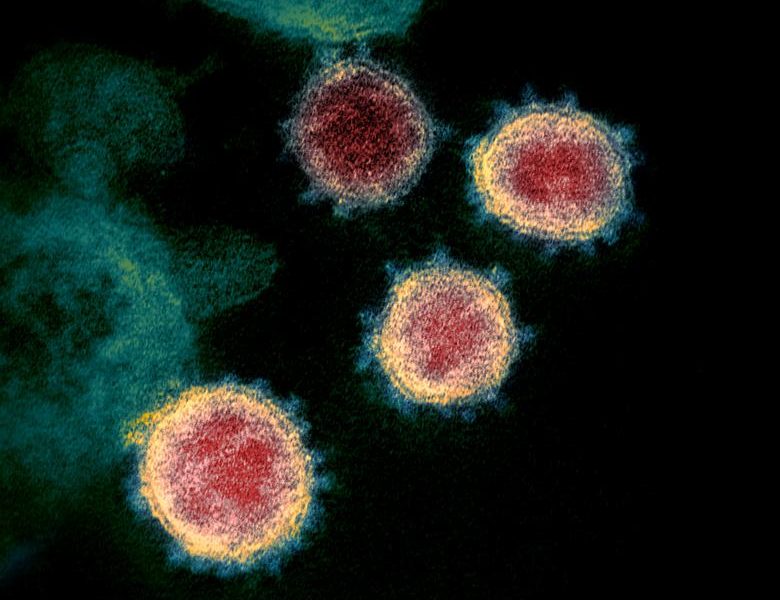 This undated transmission electron microscope image shows SARS-CoV-2, also known as novel coronavirus, the virus that causes COVID-19, isolated from a patient in the US. Photo: NIAID-RML/Handout via Reuters

New Delhi: There have been three detected cases of the Omicron subvariant BF.7, apparently the strain driving a surge of COVID-19 cases in China, in India so far, official sources said Wednesday.

BF.7 is a sub-lineage of the Omicron variant BA.5 and has the strongest infection ability since it is highly transmissible, has a shorter incubation period, and a higher capacity to cause reinfection or infect even those who are vaccinated.

The first case of BF.7 in India was detected in October by Gujarat Biotechnology Research Centre. So far, two cases have been reported from Gujarat and one from Odisha, officials said. None of these cases are new. According to Livemint, Gujarat state health department officials said that two BF.7 cases were reported in the state from July-November this year. Both of them were treated at home itself. “These patients were treated in home isolation & have fully recovered,” the official was quoted as saying. Similarly, the case in Odisha was also detected earlier this year and the person has been treated.

In the COVID-19 review meeting chaired by Union health minister Mansukh Mandaviya on Wednesday, experts said although there is no overall increase in the caseload as of now, there is a need for continued surveillance to keep a track of existing and emerging variants.

The minister asked people to follow COVID-appropriate behaviour, including wearing masks in crowded places and getting vaccinated.

Noting that only 28% of India’s eligible population have taken the COVID-19 booster dose, NITI Aayog member (health) Dr V.K. Paul, after the meeting, said people should take the jab and also wear masks in crowded places.

According to official sources, Chinese cities are currently hit by the highly transmissible Omicron strain, mostly BF.7 which is the main variant spreading in Beijing and is contributing to a wider surge of infections in that country.

“The BF.7’s high transmissibility in China might be attributed to a low level of immunity in the Chinese population from the previous infection and possibly vaccination too,” an official source said.

It has already been detected in several other countries, including the US, the UK and European nations such as Belgium, Germany, France and Denmark.

Official sources said random sample testing for coronavirus will be conducted at airports for international passengers arriving from China and other countries.

After the review meeting, Mandaviya said the COVID-19 pandemic is not over yet. “I have directed all concerned to be alert and strengthen surveillance. We are prepared to manage any situation.”

The government will again hold a meeting next week to monitor the situation.

During the meeting, it was highlighted that Kerala, Karnataka, Maharashtra, Telangana and Tamil Nadu are the top five states contributing in terms of new COVID-19 cases even though there is a consistent decline in the overall caseload in the country.

The two sub-variants of Omicron – BA.1 and BA.2 – further evolved. BA.2 diversified into several other forms including BA.4, BA.5 and BA.2.75. The BF.7, which is supposed to be driving the surge in China, is an evolution of BA.4/5.

The last weekly bulletin on the global COVID-19 situation issued by the World Health Organisation on December 14 makes a note of five “relevant” sub-variants but does not mention BF.7, and therefore, nothing about its evading neutralisation capacity.

BF.7 has remained stable almost everywhere it evolved, except in China.

Why it is driving the surge in China can be attributed to several reasons, including the fact that there was a lot of naive population – who did not have previous infection due to the “zero COVID policy” – and now the country is experiencing a massive wave. However, India and the rest of the world saw high infection rates during the Delta and Omicron waves, apart from the original strain.

While there are several variants with some capacity to evade immunity gained from infection or vaccines, no variant after Delta has been shown to have a high mortality rate. A recently conducted study did suggest that BF.7 was able to dodge immunity even in the case of those who were vaccinated thrice. But, there is no scientific study to say that it overwhelmed health infrastructure or led to increased hospitalisation rates, except in China.