Fighting COVID-19 on a Wing, a Prayer and an Acronym

The coronavirus crisis would not have hit India as badly if it had a decent public healthcare system. A course correction has now become urgent. 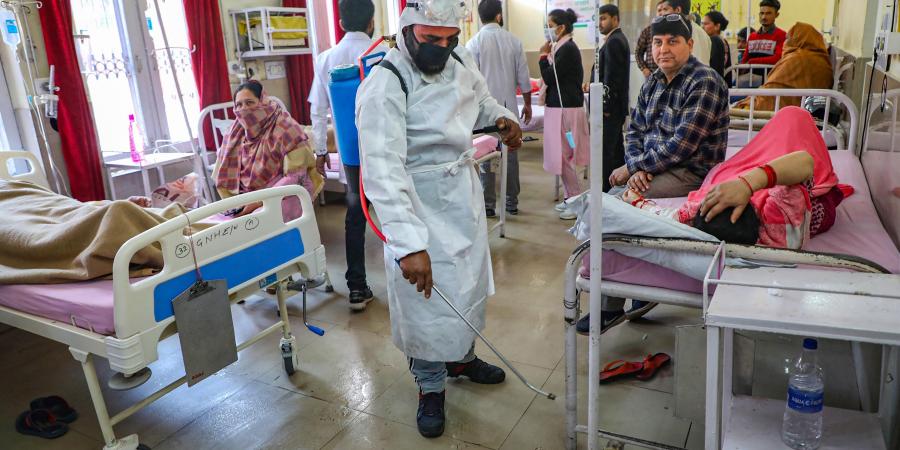 A worker sprays disinfectants inside a hospital in Jammu, March 17 2020. Photo: PTI

Although it looks more unlikely with every passing day, if we bumble our way through this coronavirus crisis, it will be through an extra-large dose of luck and the police danda rather than because of our health preparedness and systems.

Eight weeks into the lockdown, we are still to find answers to faulty testing kits, lack of personal protective equipment (PPE) for health care staff, overflowing hospital beds and inadequate testing. Because, let’s face it, over the years, successive governments have run our public health and medical infrastructure into the ground, and deaths of hundreds of children every year by the easily treatable AES (Acute Encephalitis Syndrome) in UP and Bihar are proof of this. We can easily find the money for bullet trains, hikes in MPs’ salaries, bailouts for corporates and disfigurement of the India Gate lawns, but somehow never manage to find the funds for improving our fourth world health systems.

We have 0.7 beds per thousand population against the WHO recommendation of 3.5, are short of 1.50 million doctors and 2.40 million nurses; worse, 80% of those available are in urban areas. There were only 20,000 ventilators available when this crisis began. The basic building blocks of health care – primary health centres (PHCs) and community health centres (CHCs) – suffer from a shortfall of 22% and 30%, respectively, and 90% of them do not meet the Indian Public Health Standards. Six out of 10 PHCs have only one Doctor. We are extremely fortunate that, thanks to the luck factor and military-style curfews, our broken down health system has not yet been tested by the kind of numbers in the US and Europe, for then the consequences would be catastrophic. 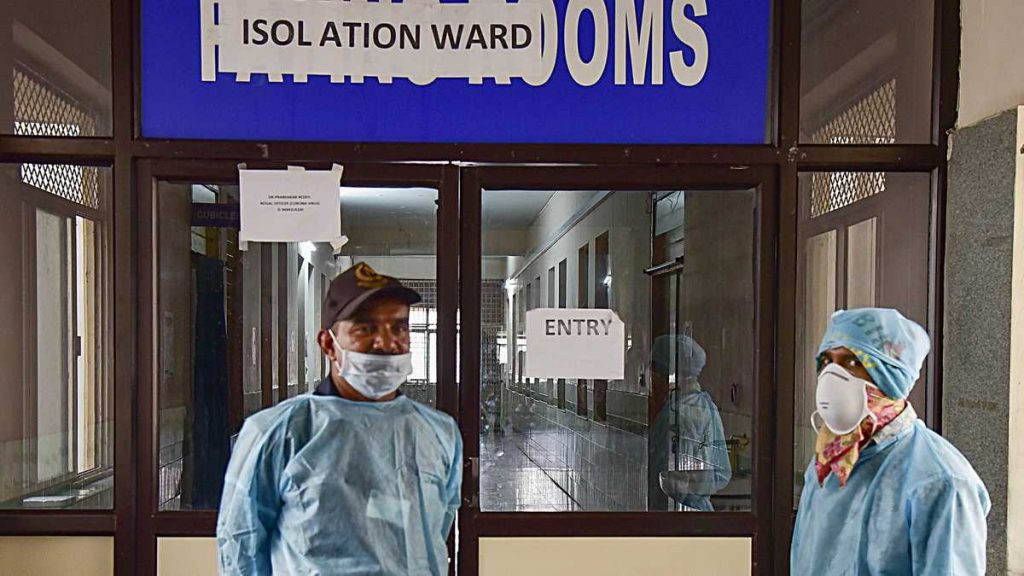 Dependence on the private sector

The present government has done little beyond formulating eponymous acronyms. It has done little to start providing the estimated Rs. 1.65 trillion required to upgrade our health system to WHO’s recommended levels. Worse, it appears to have decided to hand over the responsibility of public health to the private sector. It will hand over between Rs 15,000 crore to Rs 20,000 crore every year to private hospitals and insurers (under Ayushman Bharat) instead of using that money to improve its own primary and tertiary care institutions; a proposal is under consideration to transfer district-level hospitals to private entities; the government’s insurance schemes are little more than dispensers of medicines: for anything of any consequence, the patient is referred to a private hospital, at the cost to the government, of course.

These private and corporate hospitals have no concept of public service and are in the game only for the maximum that they can gouge out of the government and the poor patient. Patients under Ayushman Bharat will receive some level of undignified treatment, the rest will be bled of their savings and pushed below the poverty line. The private health sector has been thoroughly exposed in the age of the coronavirus. Even in these distressing times, they have seized the opportunity to make some extra money: according to a report in the Times of India, the cost of treatment/consultations in private hospitals has gone up by 25-30% in the last six weeks. The ostensible excuse is the cost of PPEs.  Governments have done nothing to control this profiteering.

All, and I mean all, the heavy lifting is being done by the creaking public hospitals which are bearing the brunt of this crisis. Their staff continue to struggle on in spite of a massive resource crunch and even when they get infected. The private ones simply turn away COVID-19 patients or just shut down, citing lack of capacity or fear of infection. They put their own interests before that of the public, and since there is little profit to be squeezed out of the virus, they would much rather stay uninvolved or down their shutters.

The government’s inability, or lack of will, to involve them in this battle was analysed in an article by Rama V. Baru and Ramila Bisht published by The Wire. They reveal how the Central government appears to be clueless about a national plan to co-opt the private health infrastructure in the fight against COVID-19. The CEO of Ayushman Bharat, instead of compulsorily requisitioning their services under the Disaster Management Act, has simply “appealed” to them to cooperate in the effort. By now all large/corporate private hospitals should have been commandeered by the government in this national crisis, and some of their staff deployed in government hospitals to assist the over-stretched medical staff there. Only a couple of state governments have started doing this now, on their own initiative.

Sitting on the sidelines, these money-making entities nonetheless have the gall to demand financial “relief” from the government. FICCI has asked the government to give them a whole host of concessions, ranging from income tax benefits to GST exemptions to loan deferments to power tariff concessions. Their greed is beyond comprehension, at a time when hundreds of millions are simply struggling to survive. Their corporate vision is clear: make exorbitant profits when the going is good, raid the public exchequer when the going gets tough. The writing is on the wall for our policymakers to see, whether or not it is in Devanagri script: public health is the core responsibility of any democratic government, even one which barely passes muster as one, like ours. It cannot be outsourced like an entertainment channel. The private sector deals in private profit, not public good; when the going gets tough, it gets going in the opposite direction. Any responsible dispensation just has to find the money to fund public health infrastructure – beg, borrow, steal, print or, even better, jettison a few Quixotic fantasies. If health minister Harsh Vardhan wants to learn how this is done, he doesn’t have to trouble himself too much – just study the Kerala model.

Kerala was the first state to bear the brunt of COVID-19, and now it is the first which can more or less claim victory over it. This did not come about by luck or egoistic acronyms or private sector benevolence, but by consistent and far-sighted policies to strengthen local bodies, decentralisation of powers, and by investment in its health care systems, which were not hocked out to robber barons. Kerala spends 6.5% of its GSDP on health as against the Centre’s 1.7%—in per capita terms Rs 7,636 as against the national average of Rs 3,800.

In the aftermath of the Nipah virus outbreak in 2018, it has spent Rs 4,000 crore to upgrade its public health systems. It has not taken the privatisation route but has prioritised the strengthening of primary and preventive care, a gradual shift to generic medicines. Its goal is to double public spending on health in the next five years. Globally also, the countries which have done the best against COVID-19 – Canada, New Zealand, Cuba, Sweden, Norway, Denmark, Finland – have robust public health systems and infrastructure.

Kerala’s active social conscience has also played a major role in containing the epidemic. While the rest of India was watching re-runs of Ramayan on TV, the government in Kerala was putting in place community kitchens, relief shelters for guest workers, strengthening its hospitals, setting up contact tracing teams and opening up its public distribution system. It was the first state to announce a relief package, one that was people-oriented and not intended to mollify corporates alone. The state is an example of what investment in health and social sectors, combined with an empathetic attitude, can deliver in times of crises. 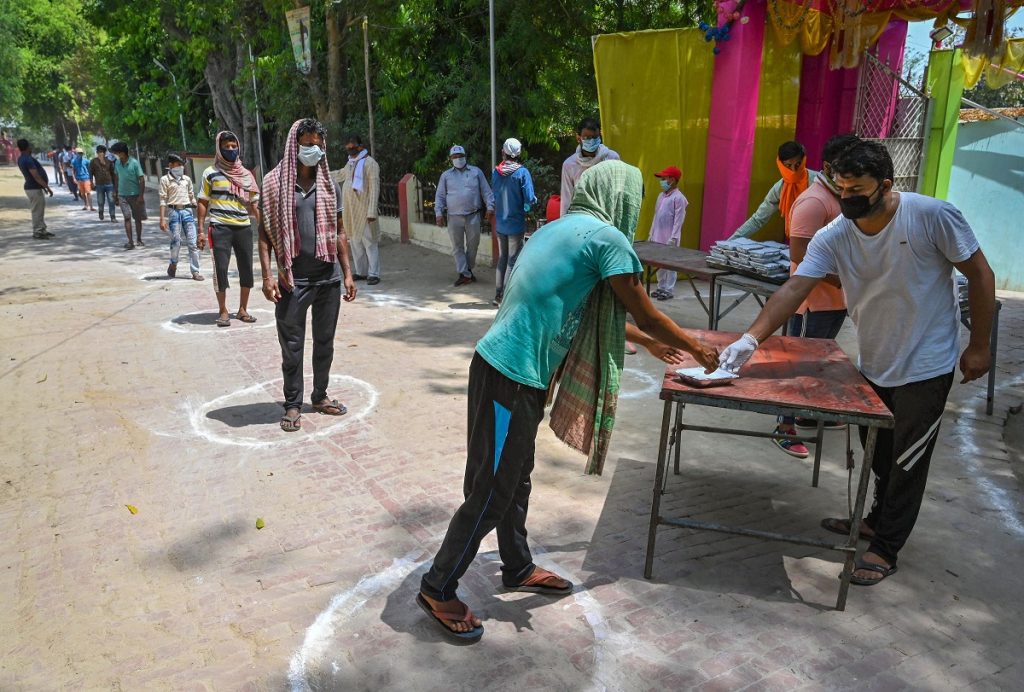 Finally, waiting in the wings is another catastrophe, as pointed out by Akriti Singh in a wonderfully researched article in The Citizen. The article focuses on the plight of the millions of patients of other medical conditions who are being left untreated because of the government’s exclusive (and short-sighted) obsession with COVID-19. She cites ICMR’s own data to show that during the lockdown, in the normal course, 300,000 fresh cancer patients would have been diagnosed, but have not been, because hospitals are either shut or dealing only with COVID-19 cases.

In addition, millions of other patients – not only of cancer but also of other life-threatening ailments of the heart, kidneys – have been unable to access the treatments and surgeries they normally could. Adhering to guidelines of the health ministry and AIIMS Delhi, hospitals are performing only 10% of their normal surgeries, supply lines of vital medicines have collapsed, radiation, dialysis and other therapies are just not available.

The Lancet journal has also raised the red flag. Quoting from the National Health Mission’s own data, it states that in March 2020, there were 69% fewer vaccinations for measles, rubella and mumps as compared to the March 2019 figures. There were significant reductions for other conditions also: 21% for institutional deliveries, 52% for clinical interventions for acute cardiac events and 32% for pulmonary interventions. These figures could have only deteriorated in April and May.

This neglect of routine health care may be because the governments are obsessed with COVID-19 or because they realise that we do not have the capacity to handle both. That is a sorry comment on both our health infrastructure and on our lack of any short term planning and long term vision. In either case, this is a ticking time bomb which may result in a surge of non-COVID-19 fatalities in the months to come. Even if we defeat the virus, it may well be a Pyrrhic victory.

There are many lessons which the coronavirus is teaching us – on the nation’s health, economy, environment, social equity. And we have to learn them fast, for the next crisis is not far away. Are we willing to learn, own up to past mistakes and make mid-course corrections or will we continue to fly on a wing and a prayer until the inevitable crash landing?

Avay Shukla retired from the Indian Administrative Service in December 2010. He blogs at [View from Greater Kailash], where this article first appeared.