While it is possible (though expensive) to try and prove the efficacy of traditional medicines, the government's attempts to propagate them don't seem to include an honest medical investigation. 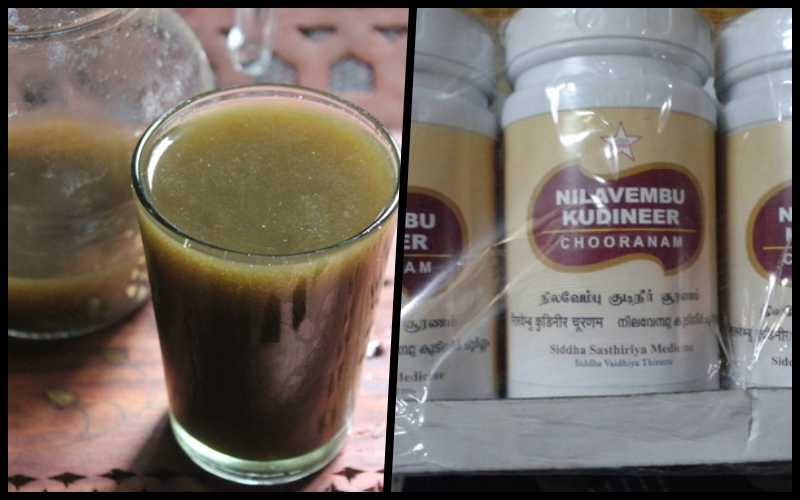 New Delhi: As many as 35 people have died of dengue in Tamil Nadu since January 2017, the state’s health secretary J. Radhakrishnan said recently. A total of 10,032 cases of the fever have been reported in the state this year. To treat this epidemic, the Tamil Nadu government decided to distribute a traditional Siddha herbal concoction, nilavembu kudineer, free of cost. The Central Council for Research in Siddha, working under the Ministry of AYUSH, has said that the concoction works not just for treating the disease but also to prevent it.

“Medical system regains their value when they are effectively utilised in public health out breaks. In dengue outbreaks the details about Siddha intervention in dengue may be helpful and by which a large number of sufferers may be benefited (sic),” a report from the council says.

The state government is distributing the liquid using mobile units and government units. “We will continue to make elaborate arrangements to distribute nilavembu kudineer to the public. Also, the government hospitals have been instructed to ensure proper hydration of all fever patients by keeping ready nilavembu kudineer, ORS, kanji (gruel). Special medical teams have been dispatched to the vulnerable districts such as Salem, Dharmapuri and Tiruvannamalai,” Tamil Nadu health minister Vijayabaskar said on Tuesday (October 17).

The AYUSH ministry has also said that the concoction can prevent and treat chikungunya.

Protect Yourself From Chikungunya Through Siddha Treatment. pic.twitter.com/zr7a3oSGdj

The ministry’s suggestions do not include visiting a certified doctor when faced with symptoms like fever and body ache – but do tell patients how these symptoms can apparently be managed.

An editorial in The Hindu, however, has questioned the government’s decision to openly propagate an alternative cure without knowing for certain its effects:

Even though there is no evidence of their efficacy, alternative remedies such as papaya-leaf juice for dengue find many takers during epidemics. While it is hard for government bodies to curb such practices, what they must never do is to endorse them.

…One of the several ingredients of nilavembu kudineer comes from a plant called Andrographis paniculata, which appears in herbal medicine systems across South Asia. As is often the case with such herbs, some evidence exists for its potency against a range of illnesses. For example, A. paniculata is known to inhibit the dengue virus in animal cells in a laboratory, and to reduce symptoms of respiratory tract infections in small human trials. But innumerable other herbal remedies also show such early promise. Sadly, only a tiny handful of these remedies go on to prove their efficacy in large-scale, placebo-controlled human trials, the gold standard of modern medicine. This is because the science of developing drugs from medicinal plants is complicated. Poly-herbal remedies like nilavembu are a mix of several compounds, while most of modern medicine relies on single-compounds. Plus, the amount of the active ingredient — the compound in a herb that acts against an illness — varies across plants. So drugmakers have to find a way to identify this ingredient and test it in large- scale trials. This exercise requires not only massive financial investment but also intellectual honesty.

While it is possible (though expensive) to try and prove the efficacy of traditional medicines, The Hindu editorial goes on to say that the government’s attempts to propagate them don’t seem to include an honest medical investigation. Even if not sold to the public as an alternative to allopathic medicines, encouraging blind faith in medicines without evidence is dangerous, especially during an epidemic. “At a time when modern medicine is advancing towards greater transparency and replicability in clinical evidence, the government’s claims on nilavembu aren’t fooling anyone in the scientific community. But these are misleading laypeople in ways that can hurt them. This is a matter of shame.”

This isn’t the first time a government body has been called out for propagating medication without proof of outcomes. In 2016, an Ayurvedic anti-diabetic drug approved by the Ministry of AYUSH, BGR-34, was launched by the Council for Scientific and Industrial Research. The commercial producer and distributor of the drug, AIMIL Pharmaceutical (a private entity), said then that it was the first time an ayurvedic formulation was being launched that has been “scientifically validated” and meets “allopathic standards”. However, as Manasi Gandhi wrote in The Wire:

The literature published by AIMIL Pharmaceuticals quotes a number of studies performed on the different components of BGR-34 – daruharidra, vijaysar, methi, gudmar, giloe and majeeth – and quoting various sources, although CSIR, NBRI and CIMAP aren’t among them. Upon looking up the websites of these organisations, there is no specific literature available on the research undertaken by these organisations leading to BGR-34. The AIMIL literature mentions a double-blind, placebo-controlled clinical trial of BGR-34 in patients with mild to moderate diabetes mellitus, performed on the OPD patients of Agarwal Hospital, New Delhi. It also mentions a formulation optimisation study, performed on experimental subjects, presumably animals. The fact that neither of these studies are verified or published in peer-reviewed scientific journals raises more questions.

In addition to BGR-34, in January this year, the AYUSH ministry also suggested that homeopathy was a good way to treat diabetes. An essay competition was organised in January inviting essays on ‘Diabetic Care Through Homeopathy’. Why is this a problem? Vasudevan Mukunth wrote in The Wire:

…homeopathy has been rigorously tested for with little to no evidence of its effectiveness emerging from these efforts. The Lancet published a review in 2005 that concluded thus: “Biases are present in placebo-controlled trials of both homoeopathy and conventional medicine. When account was taken for these biases in the analysis, there was weak evidence for a specific effect of homeopathic remedies, but strong evidence for specific effects of conventional interventions.” The Australian government’s National Health and Medical Research Council’s review in 2015 concluded that “there are no health conditions for which there is reliable evidence that homeopathy is effective” and that “homeopathy should not be used to treat health conditions that are chronic, serious, or could become serious.”

In light of all this information, the Ministry of AYUSH is endangering the lives of those whom the entries of its writing contest will appeal to: patients of diabetes. Purchasing and consuming homeopathic medicines could lure patients into a false sense of security and divert resources, problematic when scarce, into securing means of treatment that may not work. India’s dispensing of allopathic medication is also to blame: clinic/hospital visits and medicines are often unaffordable, especially outside cities. There is also a marked shortage of qualified doctors. The World Health Organisation recommends one doctor for every 1,000 people; India has one for every 1,700, and fully four-fifths of them work in urban centres. All of this makes quacks more available to patients in rural India.

As of now the standards for licensing proprietary AYUSH drugs are pretty lax. When you go in for a new drug, best is to look at the ingredients, the reputation of the manufacturer and take the indications with a pinch of salt, and you will be fine.

Sharan also said that people shouldn’t give up their allopathic treatments in favour of AYUSH ministry-approved drugs:

Sankaran Valiathan, the chairman of the Task Force on Ayurvedic Biology of the Department of Science and Technology and an honorary advisor to Manipal University, also told The Wire in October 2016 that calling drugs “traditional” simply because they consist of medicinal plants mentioned in ayurvedic texts is incorrect. “They are, in fact, new drugs and should undergo the full range of efficacy and safety tests for approval. It is even worse that CSIR is making unsubstantiated claims on ayurvedic drugs.”

On October 19, the News Minute reported Vijayabaskar saying at a press conference in Tiruchirapalli that, “Nilavembu is a proven medicine, we have tested it in King Institute in Guindy, it increased the platelets and immunity, it is proven” – although neither the results of the test nor from the clinical trials have been made publicly available by the state itself. The minister added that Tamil Nadu’s dengue situation would be brought under control in 15 days.