As a mutagen, aristolochic acid is more potent than ultraviolet radiation. If unaware, people could be consuming it for relieving lesser discomforts in the name of 'chemical-free' herbal remedies. 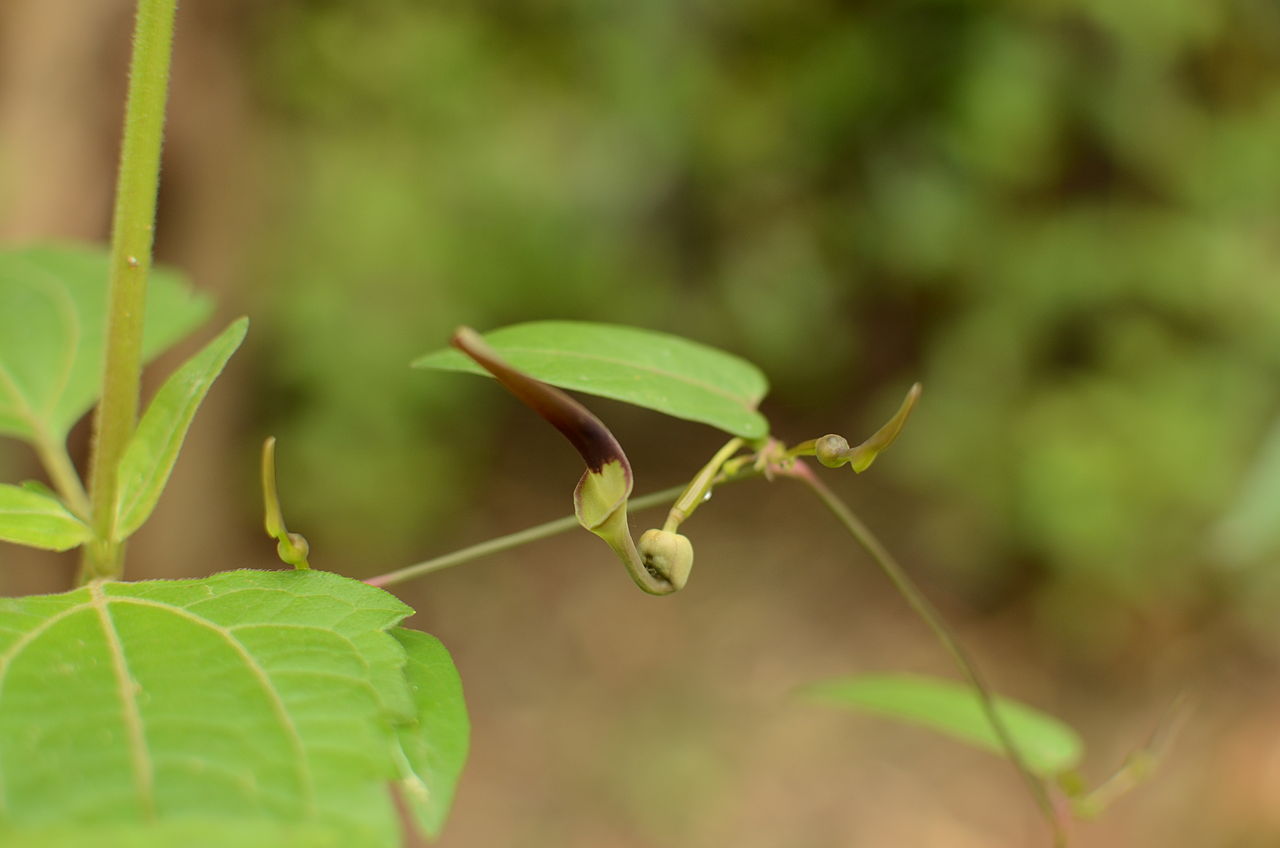 A flower of the plant Aristolochia indica. Credit: ChanduBandi/Wikimedia Commons, CC BY 3.0

As a mutagen, aristolochic acid is more potent than ultraviolet radiation. If unaware, people could be consuming it for relieving lesser discomforts in the name of ‘chemical-free’ herbal remedies.

A flower of the plant Aristolochia indica. Credit: ChanduBandi/Wikimedia Commons, CC BY 3.0

Plants under the umbrella of the birthwort family (also known as Aristolochiaceae) are used for treating a plethora of ailments, from headaches, fevers and snake bites to weight issues and virility. At first glance, it seems there is little that the plant can’t heal. However, when researchers from Singapore and Taiwan took a closer look, they found that these plant extracts could actually hasten the progression of liver cancers.

Birthwort plants contain a compound called aristolochic acid, which is known to cause extensive damage to the kidneys. It can attach itself to the DNA and form something called DNA adducts, which in turn cause mutations. “These mutations are best understood as typos in a two-billion letter long arrangement of DNA bases,” Steve Rozen, the lead author of this study and a scientist at the Duke-National University of Singapore, told The Wire. If such defects arise in genes that regulate cell division, the risk of cancer goes up.

While examining liver tumours from Taiwan, Rozen and his colleagues discerned a wide presence of aristolochic acid-DNA adducts in multiple cancer-causing genes.

It’s not the first time that this compound is being implicated as a carcinogen. In the early 1990s, aristolochic acid caused a notorious outbreak of urinary tract cancers in a group of unsuspecting women. The connection was made when the patients, all of whom attended the same weight loss clinic in Belgium, started developing severe kidney ailments. A few years later, many of them developed urinary tract cancers. This was particularly odd because cancers of the upper urinary tract are very rare and seldom have they been reported in such large numbers by a group sharing a common factor – the clinic, in this case.

It was later found that the clinic was distributing a Chinese herbal medicine containing extracts of birthwort plants. For reasons still not entirely understood, aristolochic acid, found abundantly in birthwort plants, tends to collect in the urinary tract. There, it binds to the DNA and causes mutations.

Shortly after this episode, several studies confirmed the carcinogenic nature of aristolochic acid with respect to urothelial cancers. Its association with cancers of the liver was to come much later.

In 2013, Rozen’s team was looking at upper urinary tract mutations caused by these compounds when they noticed something peculiar. Of the four nucleotides that make up DNA, the acid was binding only to one of them: adenosine. “When the cell divides next, each A harbouring the molecule is replaced by a [thymine, another nucleotide],” Rozen explained. This pattern is so unique that it serves as a fingerprint of aristolochic acid injury.

And later, similar patterns were found in liver cancer samples obtained from South China. “At that time, another researcher in my lab was working on liver cancers and he found similar typos in the tumour DNA,” Rozen recounted. “This was pure serendipity”. Was it that aristolochic acid was also involved in causing liver cancer?

To answer this question, the researchers decided to look for mutations involving the adenosine and thymine nucleotides in DNA – or A-T mutations – in malignant livers. Because herbal medicines containing extracts of the birthwort plants are widely circulated in Taiwan, the study began with tissue samples gathered from this region.

Ninety-eight samples were procured from two different hospitals in Taiwan. Their DNA was extracted, sequenced and the data was fed into a program called mSigact (short for mutational signature activity). “This software asks whether the existing mutations could arise arbitrarily even if the mutagen was not present,” according to Rozen.

The scientists were caught off guard when a staggering amount of liver tumours showed the telltale signatures of aristolochic acid injury. “When we first started looking into the association, I assumed that about 20% cases would show the relationship, but almost 80% of cases show the characteristic DNA lesions,” he said.

Their interest piqued, the researchers decided to go a step further and assess how widespread the problem really was. They scoured the tumour databases for fingerprints of aristolochic acid injury in liver malignancies. In this exercise, the lesions found in patients from Taiwan were compared with mutations identified in over 1,400 liver cancer cases from around the world.

The fingerprint of aristolochic acid injury cropped up in diverse geographic regions. Japan hosted 2.7% of the cases; North America, 4.8%; South Korea, 13%; and Southeast Asia, 29%. Additionally, almost half of all cases from China showed compound-specific lesions. All of Europe had only 1.7% of the cases because the continent had blocked the use of birthwort plants or their extracts in 2001 after a link between their consumption and kidney damage had been ascertained.

Asia had also introduced some restrictions on the use of birthwort plants in 2003. But in Taiwan, the frequency of A-T mutations in liver cancer cases did not change before and after the restrictions were imposed. This could be because the DNA adducts formed by aristolochic acid are tenacious survivors. “The lesions can persist for years,” Rozen explained. Another possible and more pernicious explanation is that the substance is being used in medicinal preparations despite the ban.

A third explanation comes from Michael Heinrich, who leads the pharmacognosy and phytotherapy group at University College London. He told The Wire that another compound, called aristolactams, found in birthwort plants also formed DNA adducts, and these plants are not banned in Asia. Their continued use could have caused the unchanged frequency of A-T mutations in Taiwan. He was not involved in the study.

Products containing birthwort extracts are still widely available in Bangladesh, Thailand, some parts of Northeast Africa, Mexico and South America, and they can be imported from these places to anywhere else on the planet. “In that sense, this is a global problem,” Heinrich said.

In India, the saga of aristolochic acids is deeply contorted. All plants that are allowed to be used for making herbal medicines are listed in a book called the Ayurvedic Pharmacopoeia of India. It is published by the Department of Ayush under the Ministry of Health and Family Welfare. While isvari (roots) that belong to the Aristolochia family (Aristolochia indica Linn) are mentioned in the third volume of this book, the section also mentions that they are suitable for external use.

However, it also mentions that an important formulation of isvari roots is gorochanadi gutika, a concoction used to treat fever, pneumonia, bronchitis, asthma, cough and cold. Ergo the concoction will have to be ingested, exposing the user to the toxic effects of aristolochic acid.

The situation is further addled by the fact that many herbal formulations are released as nutritional supplements and not medicines. “These are technically exempt from rigorous checks but can still have toxic components,” Vivek Jha, a professor of nephrology at the Postgraduate Institute of Medical Education and Research, Chandigarh, told The Wire. “Even a cursory glance in India shows these plants growing as weeds everywhere, so the likelihood of contamination is real and substantial.”

Also read: How an ancient Chinese text fought malaria and won a Nobel, while India lags behind

And it becomes a difficult problem to solve because the ingredients of herbal recipes are often listed in languages other than English when they’re being sold. And this increases the chances of mislabelling. “Sometimes a usually harmless plant, like han fang ji, is replaced with a plant containing aristolochic acid, like guang fang ji,” Rozen said.

As a mutagen, aristolochic acid is more potent than both tobacco and ultraviolet radiation. Rozen worries that due to lack of awareness, people could be consuming potential carcinogens for relieving lesser, milder discomforts – all in the name of natural, organic and ‘chemical-free’ herbal remedies.

“The evidence is all good,” says Heinrich. “And in the light of these findings, more systematic testing of herbal products, especially of unregulated ones, and stringent regulatory governance is needed.”

But these strategies will be successful only if people shun their partisan attitude towards medication. While allopathic medicines need to undergo well-structured multistep clinical trials, herbal medicines are not required to uphold similar standards. Many believe that because they have been administered for the last 2,000 years, they have stood the test of time and that humans have no reason to have them scrutinised by food and drug approval boards.

Even today, much of the evidence for herbal preparations is anecdotal. In most cases, the research is not good enough to be able to make claims about remedies prescribed by traditional practitioners. In that context, it is imperative to remember the effects of aristolochic acid.

Rozen and his colleagues are currently setting out to test the fingerprints of aristolochic acid in different types of cancers. They are confident that with all the software at their disposal, they will be able to uncover more far-reaching implications of consuming it.