Two state-level examinations pose enormous problems for hopefuls who must not only battle a health risk but also an acute problem of transport.

Chief minister of Congress-ruled Rajasthan, Ashok Gehlot, who was also present in the meeting, had extended support to his party’s demand for the postponement of NEET and JEE examinations amid the pandemic. On Friday, state health minister Raghu Sharma, along with ministers of various opposition states filed a review petition in the Supreme Court against the order dismissing the postponement of these two examinations.

Blaming the Modi government for putting lakhs of students at risk of COVID-19 infection, Rajasthan education minister and newly-appointed Pradesh Congress Committee (PCC) chief Govind Singh Dotasra had said, “The decision to hold the examinations has put lakhs of students and their family members in trouble. The students are in panic and stress and the Centre should listen to them.”

However, in Rajasthan, the Gehlot government itself is all set to conduct two state-level examinations. The Rajasthan Basic School Teaching Courses (BSTC) or Pre D.El.Ed, an entrance examination for admissions to various teacher training courses, is scheduled on August 31. In addition, the Rajasthan Public Service Commission’s assistant conservator of forest (ACF) examination is scheduled from September 20 to September 27 this year.

The admit cards for the BSTC examination have already been released. Over six lakh candidates are expected to appear in this examination.

The state government has claimed that the two examinations are totally different and there have been enough safety precautions in place for the state level examinations.

“While JEE is held all over the country, the BSTC is not like that. Also, we have earmarked many centres in rural areas so that social distancing can be maintained effectively. We had also conducted Class 10 and Class 12 Board examinations which have three times more candidates than in BSTC examinations,” said Dotasra.

This noted difference of attitude towards state-coordinated examinations has not gone down well with candidates appearing for these examinations.

Apart from safety concerns amid the pandemic, candidates from the rural areas are worried about reaching the examination centres, mostly situated at the district headquarters, in the absence of personal vehicles.

“In Rajasthan, to get from one end of a district to another, one has to travel more than 100 kilometres. My exam centre is in Kuchaman, about 130 kilometres from my village. I don’t have any personal vehicle, if other candidates from my area agree to take me along with them, only then can I appear for the examination,” Rakesh Kaswa, a BSTC exam candidate from Sinod village in Nagaur told The Wire.

He added that the examination begins at 9 am and for candidates who do not have a vehicle of their own, it would be especially impossible to reach the centre so early.

“Most candidates will be forced to travel to the district headquarter a day before the test and make arrangements for a night stay, which would again be very risky,” Kaswa added.

Kaswa is not hopeful that social distancing norms would be followed during the examination.

There have been reports that social distancing norms were openly violated during the Bachelor of Education (B.Ed.) examinations conducted by the Uttar Pradesh government this month.

The second state-level test scheduled to be conducted in September, the Rajasthan Public Service Commission’s assistant conservator of forest (ACF) examination, is a bigger challenge for candidates primarily because it spans over eight days beginning from September 20 to September 27 and would be conducted only at the divisional headquarters in the state. 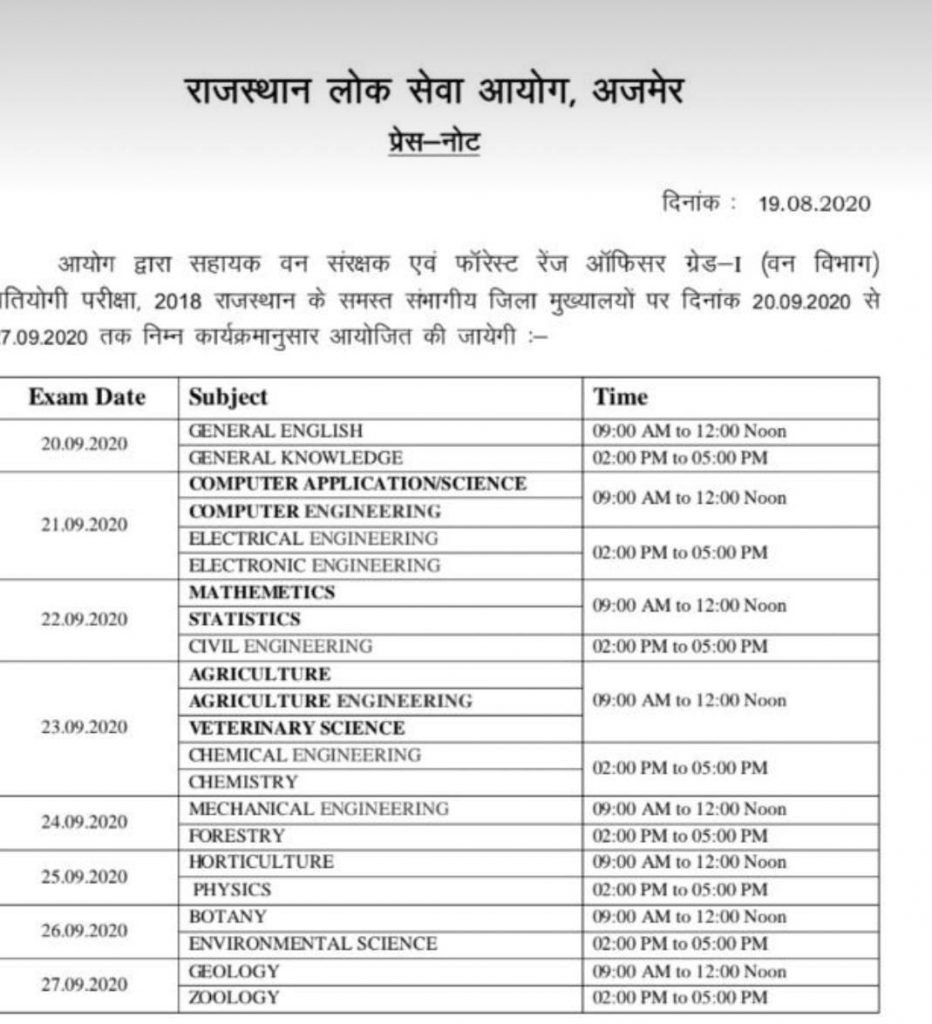 Schedule for the RPSC ACF examination.

Those appearing for this examination will have to either stay near the centres for eight days or commute hundreds of kilometres everyday.

The latter is a costly affair in the absence of public transportation.

“Most of the aspirants belong to poor-income families in rural areas. Since, public transportation has not resumed in our area, it would not be possible for us to commute every day. We will have to search for accommodation but that would be very risky,” Bhaskar Sharma, a RPSC ACF aspirant from Jodhpur district told The Wire.

For women candidates, appearing for this examination has become even more difficult.

Kiran Agarwal, a candidate for the ACF examination from Palsana has a six months old baby. She is worried about exposing herself to a crowd at the examination centre as it would not be possible for her to isolate herself from the baby for eight days.

“This examination is important for me and in no case I would want to miss my chance this year. I breastfeed my baby but if I sit in the examination, my baby will be at risk,” she said.

“If I have to stay at another place, it would be even more difficult because I wouldn’t be able to take my baby along, nor leave the child at home,” Agarwal added.

Sapna, another candidate from Rajasthan said that her family has asked her not to appear in the examination this year.

“My father lost his job in the pandemic. He has told me that he cannot afford to take me to the centre daily in a private vehicle. He won’t even let me stay at the headquarters for eight days alone and I don’t want to take him and risk his life,” she told The Wire.

Another issue with conducting the ACF examination on the scheduled dates in September is that the final year students would not be able to appear due to its eligibility criteria that requires a bachelor’s degree.

A Congress MLA from Nawalgarh constituency in Rajasthan’s Jhunjhunu, Rajkumar Sharma, has written to Ashok Gehlot to postpone the RPSC’s ACF examination as lakhs of final year students, whose college examinations are still pending, would be ineligible to appear in the examination. 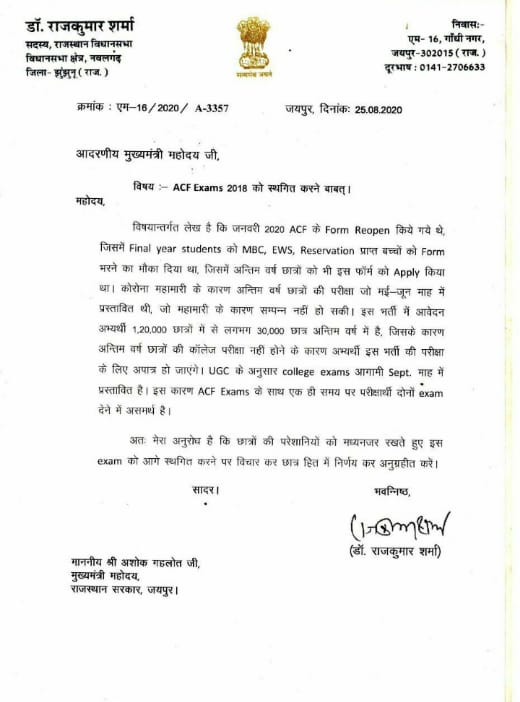 He has also added that since the University Grants Commission (UGC) guidelines have directed that the final year examinations  need to be conducted by September, the final year students appearing for the ACF examination would not be able to manage the two examinations simultaneously.

Meanwhile, the opposition Bhartiya Janta Party (BJP) in Rajasthan has slammed the Gehlot government for its “double standards.”

Speaking to The Wire, Kiran Maheshwari, BJP MLA from Rajsamand and former education minister said, “In Rajasthan, there are 269 examination centres for NEET where over 1.8 lakh students will appear. The arrangement is done such that each room will have only 12 students, meaning that social distancing norms will be effortlessly maintained. However, for the BSTC examination, the state government has not disclosed even the number of centres.”

“The Centre is conducting examinations as per the Supreme Court’s order and this is entirely in the interest of students’ future. JEE is, in fact, online and should not be a problem to anyone,” she added.

“The Congress government is only politicising this matter. They are actually saying that the students will be at risk while giving NEET and JEE but not while giving state examinations. This purely reflects their double standards,” Maheshwari further added.