The Karnataka government's study is riddled with conflict of interest, has methodological flaws and uses skewed data to present conclusions that are favourable to private hospitals.

A procedural costing ‘study’ for prices of hospital procedures was published last year by the Karnataka Knowledge Commission or Karnataka Jnana Aayoga (KJA). For the last few months, the study is being cited widely by the Association of Healthcare Providers India (AHPI), which is a large lobby group for private hospitals.

KJA’s document says, “The procedural costing study reveals that the reimbursement being made to the empanelled private hospitals for different procedures under various schemes by the government of Karnataka is far less than the actual cost incurred by these hospitals.” It also says that government schemes have different rates for the same procedure. It examined prices for 20 common procedures.

AHPI has been citing these conclusions widely to the media and in their communication with the government. The powerful lobby group claims that KJA’s study is a ‘systematic and scientific’ one. It has been using this as a basis to demand higher reimbursements for packages under the Ayushman Bharat scheme.

Private hospitals were asked by Dr Alexander Thomas, the president of the AHPI, to write individually to the CEO of the Ayushman Bharat scheme, copying the Prime Minister’s Office, the health minister and NITI Aayog, indicating that the rates for the various procedures under the scheme are ‘unrealistic, abysmally low and untenable’. Their implied threat in the letter says, “The success of this ambitious scheme would largely depend on the active inclusive involvement of the private healthcare.”

But even while the AHPI and the other major lobby group, the Indian Medical Association (IMA), are building pressure against the government, saying that the package rates which the government has fixed are unscientifically done, how scientific is the KJA document which the AHPI is waving around?

The committee was rife with conflict of interest

The insurance mode of healthcare delivery has made private and for-profit players into ‘stakeholders’ instead of seeing them as a conflict to public interest. The Cambridge English dictionary defines conflict of interest as ‘a situation in which someone cannot make a fair decision because they will be affected by the result’. According to the International Committee of Medical Journal Editors, “Public trust in the scientific process and the credibility of published articles depend in part on how transparently conflicts of interest are handled during the planning, implementation, writing, peer review, editing, and publication of scientific work.”

The chairperson of the KJA, in his foreword to this task force report, states that he is ‘happy that the KJA Task Force on KPHP – led by Dr Devi Shetty, an eminent cardiology expert doctor of the country and Dr Alex, yet another eminent public health expert has defined a State Public Health Policy.’

Let us look at the various sub-committees and members closely.

The conflict of interest of this sub-committee on procedural costing is brazenly evident. For example, in Karnataka, Shetty’s Narayana Hrudalaya was ranked number one on the number of hospital-wise pre-authorisation cases and amount, according to a 2012 study submitted to Karnataka’s planning department. The same study showed that it is also one of the four largest beneficiaries of the state’s health insurance schemes. Just these four hospitals managed to swallow 43% of approved insurance payments.

A second example of the conflict is AHPI itself. AHPI is a network of different private hospitals across the country. The indisputable fact is that the doctors on this task force own or manage very large corporate hospitals that get the major share of benefits from government health schemes, and therefore their presence on committees or research projects that decide on costing for these very schemes is unethical.

The procedural costing committee also has representatives from the Indian Institute of Management, Bangalore (IIM-B), the programme manager of Narayana Health, the director general of AHPI, the CEO of the National Accreditation Board for Hospitals and Healthcare providers (NABH), the secretary general of the Consortium of Accredited Healthcare Organisations, representatives of insurance companies and the head of finance services of a private hospital in Bengaluru.

The IIM-B representative on this task force is professor S. Raghunath, from the department of corporate strategy and policy at the institute, who specialises in ‘strategic leadership’. How these skills translate into qualification for a procedural costing study has been left to the imagination.

The task force members have at no point stated their conflict of interest in preparing and circulating this ‘study’ – basic ethical premises that cannot be violated. If indeed a study was required, it should have been conducted by a third party independent agency, or at the very least by a professional cost accounting company that does not stand to gain financially by the outcomes of the study.

The initial methodology of the KJA study seems to have been to analyse the cost for 20 procedures under four specialties from private, government and the not-for-profit sector. However, the results presented finally are of only four private hospitals. Secondly, the hospitals selected were all in Bengaluru, even though the analysis is purportedly for a state-wide health policy and is being used by AHPI to advocate for a nationwide policy.

The problem with such a flawed analysis is that even one non-representative hospital out of an entire sample size of four will skew the data and can make it completely biased.

Much of KJA’s plans to collected wide data fell away in their final analysis, which is rife with caveats and explanations on their inability to get government data for any of the four specialties. So the only data in this study is from the private sector. Which means, the study is clearly biased to a particular kind of care and cost of care – the expensive, private kind.

“While attempting to collect data from the selected hospitals, in spite of persistent and prolonged efforts, the relevant data from the government hospitals for neurosurgery and oncology could not be obtained. Also, in case of the not-for-profit hospital and Government Orthopaedic Hospital, the data could not be validated. In the case of the Government Cardiology Institute, though the data provided was inadequate and could not be validated, an attempt has been made to utilise the data as appropriate.”

Yet, broad and baseless arguments are being made by lobbies like AHPI to pressurise the government to increase reimbursements to hospitals. 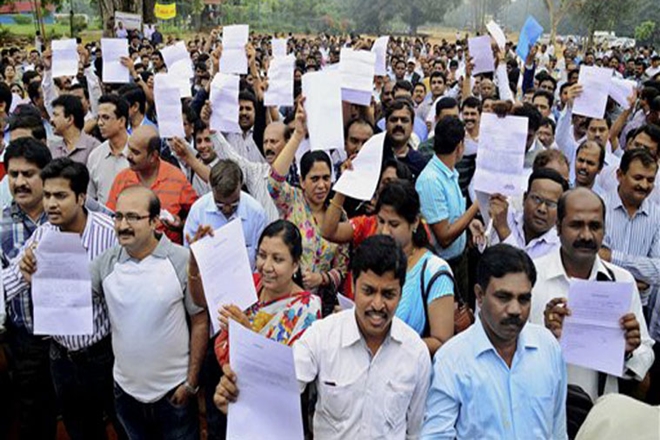 Secondly, there is no mention in the ‘study’ of how the four private speciality hospitals, which are described as reputed and NABH accredited, were selected. How are four hospitals in Bengaluru representative of hospitals all over Karnataka, let alone used as a model for Indian costing?

The KJA ‘study’ states, “Clinical pathway was used as far as possible to determine the number of days of stay in hospital and also for the investigations, to arrive at the rates being reimbursed. All the hospitals were asked to provide the cost in line with that specified in the clinical pathway.”

A well defined cost unit is crucial for setting up a reliable cost unit accounting system in a hospital. Although a clinical pathway can be used as a cost unit, it has to be devised for specific procedures that encompass all aspects of the treatment across different levels of care. These costs can be collected using service records and process algorithms, but not as an aggregate cost calculation in the form of number of procedures done, number of pre-operative visits, number of post discharge visits.

The structuring of the clinical pathway is quite important in order to ensure minimal variation in the diagnoses and procedures within the pathway, in order that the consumption of resources remains homogeneous. Obviously and critically, the method chosen is important because different methods will give different results on costs based on the underlying assumptions and characteristics of services.

Costing is a necessarily complex exercise and influenced by multiple variables such as salaries, cost of real estate and hospital utilisation rates. In the interest of transparency, the ‘study’ should have displayed one such clinical pathway for any of the procedures identified for the cost analysis.

The study says that  for indirect costs, apportionment of overheads was done according to the logic as specified by each of the hospitals. These methodological choices would in fact lead to arbitrary costing, where hospital managements could include or exclude any overhead, especially being aware that the outcomes of this study would then be used to put pressure on the government to increase reimbursement rates. As acknowledged in the report itself, costing has been left to the private hospital to disclose. It is a no-brainer that a private hospital participating in this study would be well aware that their reimbursements for government schemes would be as high or as low as they quote for the study.

Some mission hospitals pay their staff a regular salary, while many corporates pay consultants fees based on number of surgeries performed. How are these costs comparable?

The ‘study’ states that for drugs and consumables, the purchase costs were used but for investigations, the cost was decided by the hospital. Why was purchase cost also not used here?

The sub-committee states that package rates are uniform across all types of patients for a particular procedure with no provision for any associated co-morbid conditions or complications. However, they make no mention of whether this was factored into their own costing process.

Many of the members on the sub-committee of the task force of the KJA have a conflict of interest in conducting this ‘study’.

The United Kingdom’s National Institute for Health and Care Excellence (NICE) is an independent body that has been providing evidence based guidance to the National Health Service (NHS) on clinically and cost effective treatments. It has representation from independent lay members, clinical practice, public health, social care and where appropriate, from industry.

NICE explains that for any appraisal of ‘health technologies,’ it is essential that the “evidence, the analysis and their interpretation, are of the highest standards and are transparent.” It should be “assembled systematically and synthesised in a transparent way that allows the analysis to be reproduced and should be analysed in a way that is methodologically sound and, in particular, minimises any bias.”

These would be good guidelines for any study on costing to follow. It is important that policy decisions are informed by research that is keeping with principles such as truthfulness, non-maleficence, competence, fidelity, responsibility and integrity.

Considering that the healthcare of a country could depend on it, it would be good practice to, at the very least, demand transparency and disclosure of conflict of interest before jumping on the bandwagon claiming that a study on costing of healthcare schemes is ‘systematic and scientific’.

Sylvia Karpagam is a public health doctor and researcher. Denny John is an evidence Synthesis Specialist at Campbell Collaboration in New Delhi.