On the 160th Anniversary of the 1857 Uprising, Meet the Meerut Historian Keeping the Story Alive

Meerut would have done a fine job of burying any evidence of the pivotal role it played in the first war of independence – were it not for the constant exertions of Amit Pathak, a historian from the city. 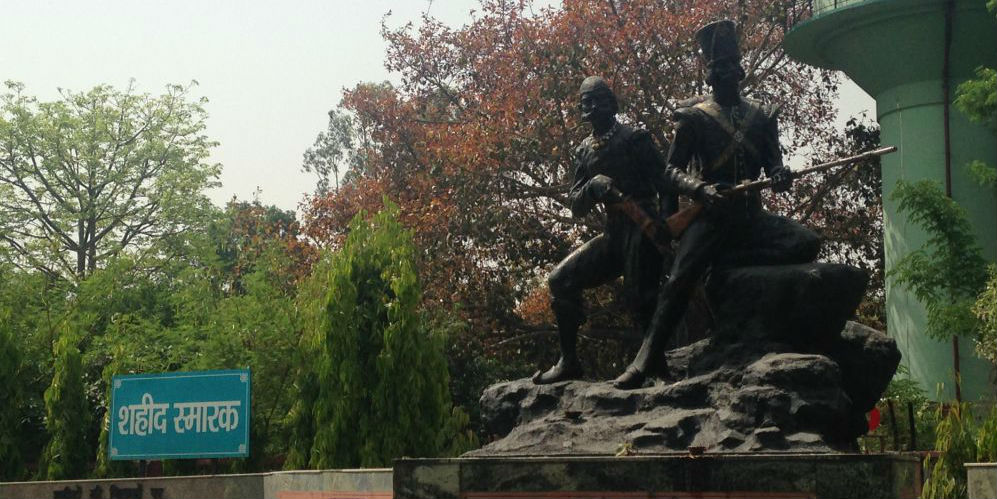 A memorial that was established in 2002 by Amit Pathak and a few others in the Cantonment area in Meerut with the names of the revolutuonaries from the military and civilian population. Credit: Sunaina Kumar 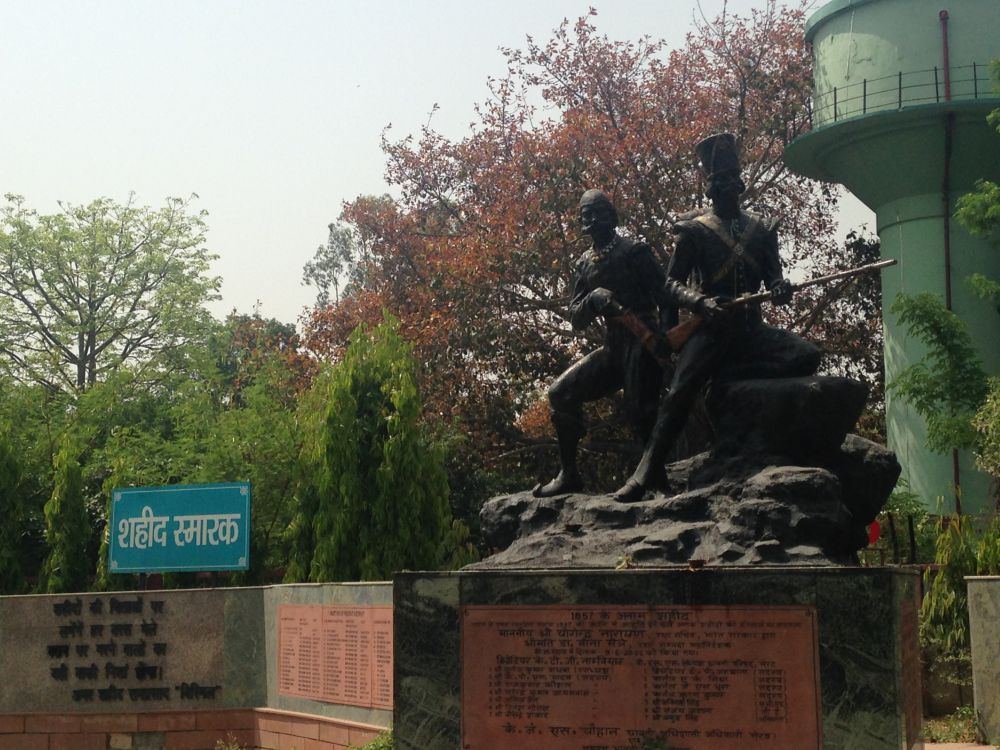 A memorial that was established in 2002 by Amit Pathak and a few others in the Cantonment area in Meerut with the names of the revolutuonaries from the military and civilian population. Credit: Sunaina Kumar

“10th of May was a Sunday. It was a hot day of an Indian summer and Europeans residing in Meerut could never have fathomed the calamity that was about to befall upon them. There was a silent churning going on in the Indian half of Meerut cantonment. Under the apparent calm of routine cantonment life, a volcano was heating up to near eruption. It was noted that many Indian servants did not report for work in British homes on that fateful day. The warnings of few other servants to their British masters regarding the coming of a storm were neglected. It has been reported that a group of Indian sepoys had left for Delhi on the night of the 9th itself to inform their comrades about the events that were about to take place in Meerut the following day.”
∼ Amit Pathak, a historian from Meerut, writes in his book History and Culture of Western Uttar Pradesh.

Meerut, Uttar Pradesh: On a recent afternoon in May, Amit Pathak, who conducts tours of the 1857 sites in Meerut – his audience comprising mostly of army officers, a handful of amateur historians and the stray British tourist – started the tour at Sadar Bazar.

Sadar Bazar, located in the cantonment area of Meerut, is a bustling retail and wholesale marketplace. When the British established the cantonment in Meerut in 1806, the largest in India at the time, they also set up the market. It was to keep the Indian sepoys from going into the city and mingling with the locals.

On a Sunday evening 160 years ago, many British soldiers, officers and their families had come down to the bazaar from the European half of the cantonment. Some were out for a walk and some were headed to the shop that sold beer. At around 5:30 pm, a rumour suddenly surfaced in Sadar Bazar that the British regiments were coming to disarm the native regiments. All hell broke loose. People of Sadar Bazar immediately started attacking every British soldier or officer who was present in the bazaar at that time. The 1857 War of Independence had begun. 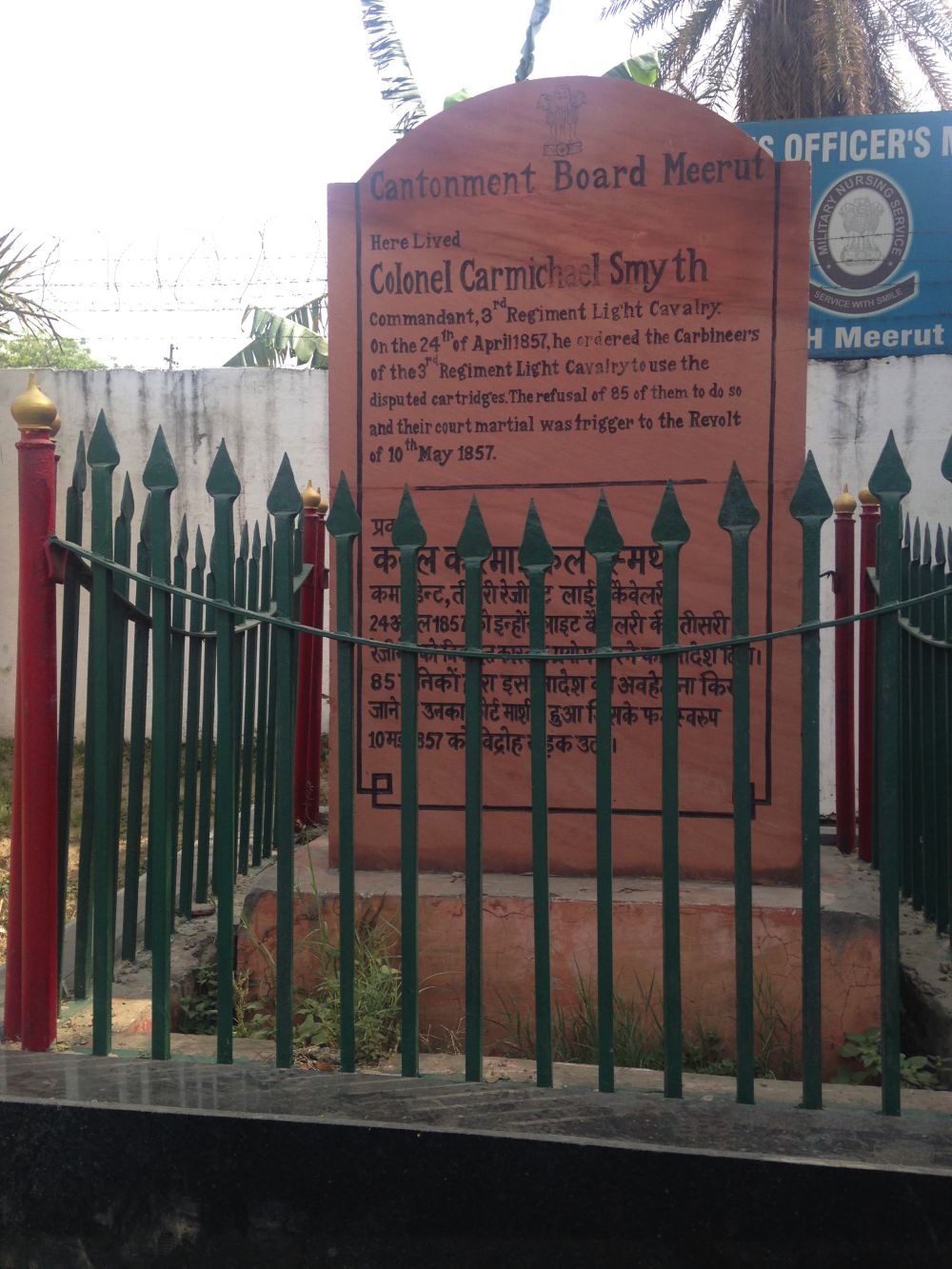 The house of Col Carmichael Smyth, who ordered the troops to use the disputed cartridges. Credit: Sunaina Kumar

Over an hour and a half, Pathak masterfully recreates the events of that day. The next stop on the tour is the parade ground where 85 sepoys, both Hindu and Muslim, refused to touch the greased cartridges, the incident that sparked the rebellion. The Kali Paltan temple, where a fakir arrived from the eastern part of the country in the month of April to spur the people to revolt, remains hugely popular even now with the locals. We stop next at the parade ground of the Native Infantry regiment where chants of “the Company Raj is over forever” were heard, and where the first British officer to be killed, Colonel John Finnis, was shot by a sepoy. We cross the bungalows of British residents which were destroyed by the mob, most of which have now been converted into officers’ messes. 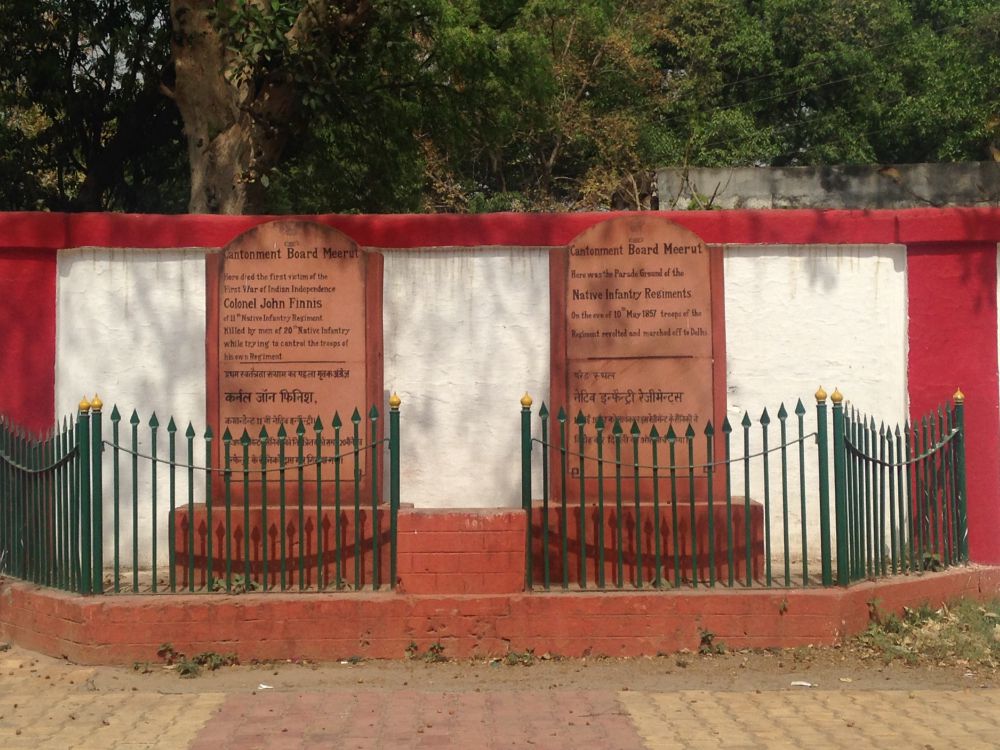 The house of Mrs Chambers has a stone inscription. She was caught in the crossfire between her husband’s troops and the revolutionaries, and was killed near a well where she hid. Mrs Chambers’ death was later used by the British to incite harsh reprisals against the mutineers. We stop at last at St John’s Cemetery where all the Europeans who died on that day were buried. The British retaliation was swift and merciless, but no records exist of the number of Indian deaths in retaliatory attacks, and so the tour ends up telling more of the British side of the story, a bias that Pathak is working on fixing by conducting research on the Indians who lost their lives and connecting with their descendants. 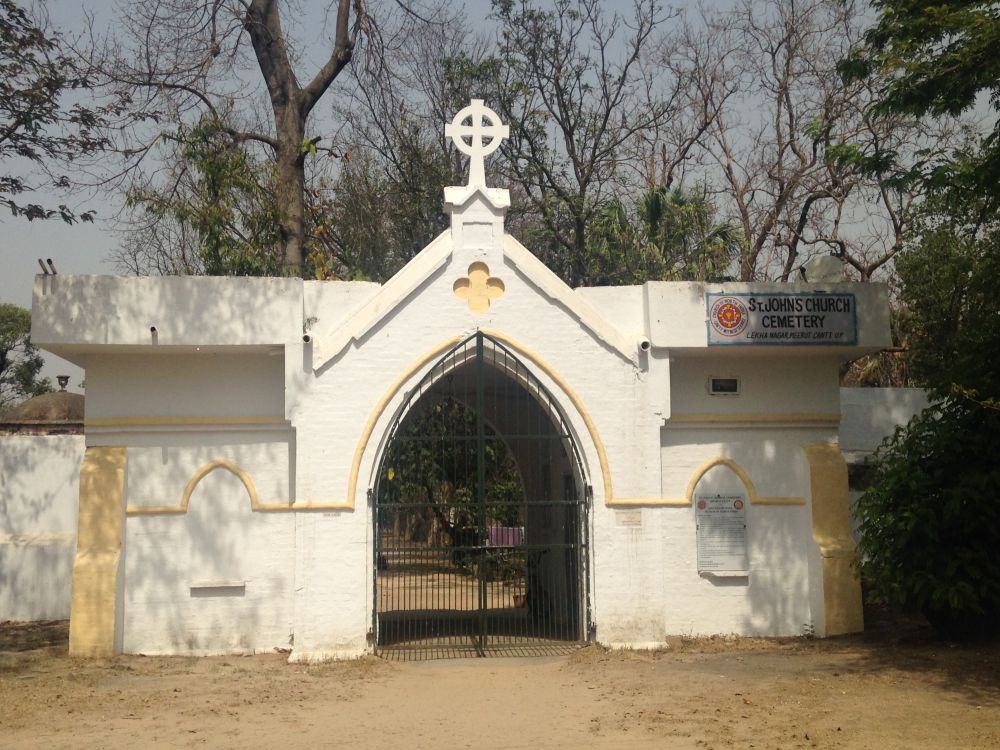 St John’s Church Cemetry, where the all Europeans who died on that day were buried. Credit: Sunaina Kumar

“Meerut, because of its proximity to Delhi, was the only station with the largest British presence – three full regiments. It should have been the most secure place for the British. Never in their wildest dreams could they have imagined the revolt, and that makes it all the more remarkable,” he says.

Meerut, a congested but prosperous industrial town known for its history of Hindu-Muslim riots after independence, located not very far from the capital, is a city on the make. Like much of India, it is not a place that has any time or regard for history. Rather, Meerut had done a fine job of burying any evidence of the pivotal role it played in the first war of independence – were it not for the constant exertions of one man. Pathak, now a custodian of Meerut’s history, is a doctor who is also a historian, and a fellow at Centre for Armed Forces Historical Research. He has authored several books on 1857, like Revolution of 1857 and Meerut and 1857 – Living History. 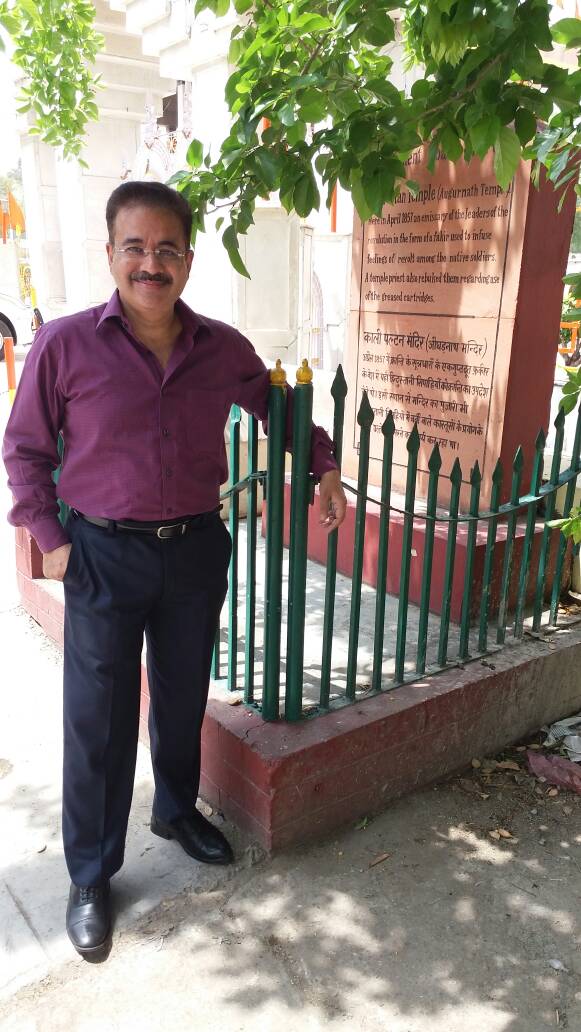 Nearly 20 years ago, when Pathak returned to live in his native city after working in the south and the northeast, he became interested in Meerut’s brush with history. “Till the 90s, there was nothing to be found in the city about the mutiny, no material, no monuments, no one who could identify the key sites,” says the 49-year-old. Help was at hand, his uncle K.D. Sharma, a lecturer of history at Meerut College, was the only researcher of the events of 1857. Pathak immersed himself in all the material that was available and, in 2002, he along with a few other historians worked with the Cantonment Board to install 20 inscriptions in red sandstone that re-tell the story of the revolution. He was also involved in establishing the Government Freedom Struggle Museum in Meerut in 2007 to mark the 150th anniversary of the revolt.

A memorial that was established in 2002 in the Cantonment area in Meerut with the names of the revolutuonaries from the military and civilian population. Credit: Sunaina Kumar

At his home, which is in the heart of the city, the oldest and busiest part of Meerut, Pathak has stowed a collection of rare newspapers, lithographs and illustrations from London from early and mid 19th century. The Illustrated London News and the Illustrated Times had covered the events of 1857 in great detail. The first reports started appearing in June, almost a month after the eruption, and were mostly objective and balanced, trying to introspect on what went wrong with the governing system in India. It would be a while before the reporting would acquire a distinct British bias. He also pulls out rare lithographs of Begum Hazrat Mahal and Tatya Tope from the time of the revolution. A copy of the Illustrated Times, dated October 10, 1857, carries an illustration of the mutiny in Allahabad. Credit: Sunaina Kumar

Pathak has acquired his collection through painstaking work, tracking online auctions for years, and plans to eventually donate it to the Centre for Armed Forces Historical Research, which he is associated with. “I am lucky that I have a day job as a radiologist, which helps me spend on what I’m passionate about.”

Pathak’s quest is far from over. He is currently consumed by what he calls “the rebel villages project”. The mutiny, viewed as one that was led by sepoys, was equally a mutiny by civilians, and Pathak has been trying to ensure that the civilian population of Meerut, which participated in the revolt, does not remain unremembered. For some years, he and members of Culture and History Association, a non-profit that he has formed, have been working on identifying the villages around Meerut that were part of the revolt.

In the village of Ukulpura lived Narpat Singh, a revolutionary who led Rajputs and Ranghars for nearly two months and freed his region from the British rule. “He died in a direct confrontation with British military which attacked his village on July 22, 1857. All those who fought with him died in true Rajput tradition. The British then confiscated the property of the village and auctioned it off as punishment. His descendants are still very poor and when we visited them, they were talking of the poor harvest, no rains and miseries of the Indian farmer,” he said.

After the revolt, the peasants that participated were punished, they were hanged and their lands were confiscated. Most of the descendants are still mired in poverty, they never got their land back and are suffering to this day. Some are unaware of the part their families played in history. “Sadly, as is in all other villages linked to the Great Uprising, no government or non-government agency has ever visited these village since 1947,” he added.

In Meerut city, May 10 is a school holiday. Small programmes will be organised around town to commemorate the day, said Pathak. Many people will offer prayers at Kali Paltan temple, where the fakir from the east came. The city in the last decade has become a little more conscious of its role in the struggle for freedom. It may not be a lot, but it’s a start.

Sunaina Kumar is a Delhi-based journalist who writes on politics, society and culture.