Lockdowns are not a panacea and is important to look at what else can be done that is also extraordinary but at the same time does not hurt working people as much. 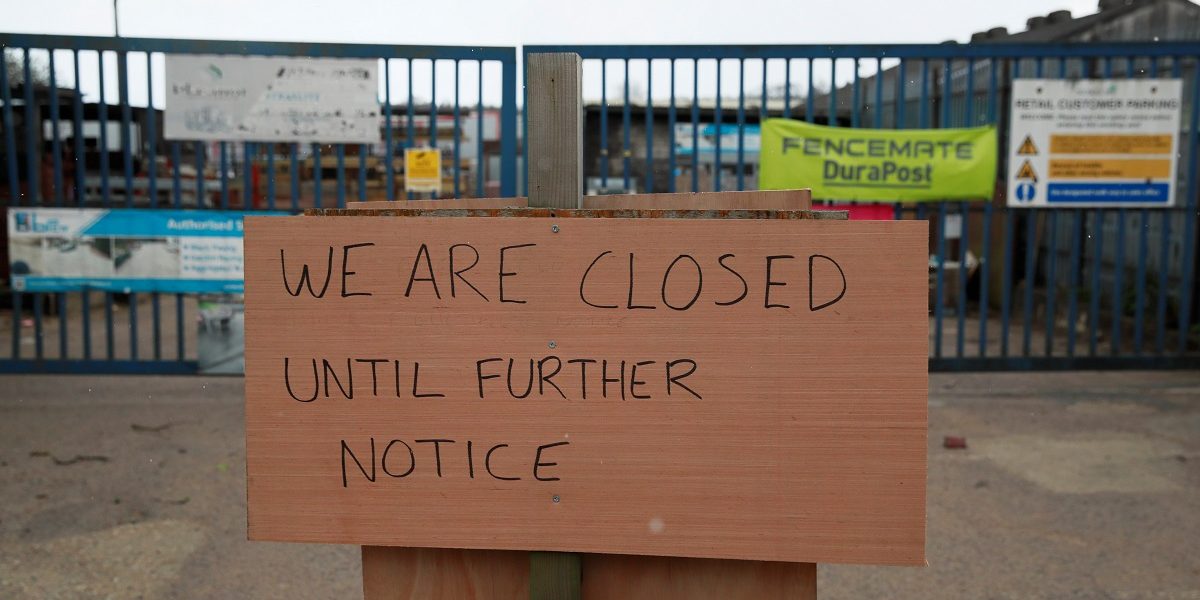 A sign is seen at a building merchants, as the spread of COVID-19 continues, Hertford, Britain, March 29, 2020. Photo: REUTERS/Andrew Couldridge

The novel coronavirus pandemic is ‘novel’ in many ways. It has affected 173 countries till date with ever-changing case numbers (a million-plus worldwide and counting) and a mortality rate pegged at 1 percent with inter-country variations. This rapid rate of spread has occurred in barely 3-4 months with the first case believed to have emerged in China in November 2019.

Transmission of the novel coronavirus is similar to the seasonal influenza virus that spreads via respiratory droplets. Thus, over time, it is bound to infect millions, as is being predicted by public health experts. As such predictions emerged, politicians in the US, Europe and India started adopting unprecedented measures to contain the outbreak. Some of these efforts are certainly laudable. However, a critical evaluation and assessment of such measures – especially lockdowns – is lacking in the name of the urgency to act. What if some measures hurt more than they help?

While social distancing certainly makes sense and the oft repeated term of ‘flattening the curve’ of new cases seems to be logical as well, politicians and experts have ignored the fact that a disease does not exist in its own independent sphere but has to be considered in a socio-economic context.

Take, for example, a country like India, which has 1.38 billion people with an estimated 800 million people that are considered poor. Typically, that would mean multiple people living in a single room in cheek-by-jowl dwellings; more importantly, millions live on the streets. What kind of ‘social distancing’ can this bottom two-thirds (or more) of the population practice?

From a livelihood perspective, almost all poor households are dependent on their interactions with the society around them. A street vendor’s lifeline is the presence of a lively street. A housemaid cannot practice isolation for weeks, which would not only impact her but also her conveniently situated employers. The hundreds of thousands of migrant labourers who walked hundreds of kilometres after the abrupt shut-down of public transportation, the horrific scenes of chlorinated water being sprayed on hapless labourers, making them hop on the streets by inhuman cops and the merciless beating of street vendors and minor offenders of draconian social distancing laws are a testament to the lopsided utility of these measures. Countless young kids are dependent on school meal programs and will go hungry when schools are closed. Thus, it is not only impractical but also downright haughty to prescribe social distancing to a country with vast income inequalities where people are left to fend for themselves.

While the United States is certainly considered rich, each and every city is a testament to grotesque social disparities. Every night, about half a million people sleep on the streets in one of the world’s richest countries. Do the leaders that promulgated ‘stay at home’ ordinances have a plan for these hapless individuals? While resort cities such as Las Vegas have become ghost towns with deserted hotels, homeless people remain confined to boxed in spaces in empty parking lots, showcasing the ineptitude of lawmakers that remain torchbearers of social inequality. Can’t a virus that spreads by droplet transmission infect these individuals and thereby contribute to more cases in the society as a whole?

In a country that lives and thrives on capitalism, a blanket shutdown of the ourism, aviation and restaurant industries would only mean livelihood loss for millions, as is already evident. Is there an estimate of what that translates in to in terms of jobs lost – and could eventually mean lives lost? Is it all going to be worth the COVID-19 cases prevented by this lockdown? The multi-trillion dollar economic stimulus planned by the US federal government would only go so far, as witnessed perhaps during the 2008-09 economic crisis, and going by preliminary analysis, it is tailor-made to accentuate wealth concentration in the hands of the few with billions of dollars doled out to big corporates with no stipulation on where that money goes.

There are millions that do not fall in the ‘stimulus’ umbrella. There are countless people that are undocumented but still form the basis of the working-class economy that would not qualify for such a stimulus. They, in turn, would affect the lives of others that live around them. All of this should have been considered before taking the extreme step of bringing the US economy to a grinding halt. Now, it’s already too late. China was able to provide basic supplies to all its citizens affected by the lockdown. The government even transported medical professionals to the hospitals themselves so the lockdown, though regionally confined, was universal and truly effective. Is something like this even remotely possible in a capitalist society such as the US or in a broken system such as India’s?

It is not the intention of this article to downplay the unfolding pandemic. It is important to look at what else can be done that is also extraordinary but at the same time does not hurt working people as much. While politicians in India and the US zeroed in on what they could easily do in this crisis, they conveniently ignored the arduous tasks. China built a 1000-bed hospital exclusively to handle coronavirus cases in Wuhan, the epicentre of the outbreak. It is sheer grit, determination and loads of money that go in to such an exercise.

The argument being made for social distancing and isolation is to reduce the number of cases that would be seriously ill and require mechanical ventilation. In such a case, what should happen on a war-footing is building new hospitals and manufacturing ventilators at a break-neck speed. The US did promote an exercise of mass manufacturing during World War II, albeit on the weapons side, but why can’t it be replicated now? On the contrary, if countries are shut down en-masse, leave alone ventilators, even personal protective equipment (PPE) crucial for healthcare workers will remain in scarce supply worldwide.

It is also worth noting that the symptoms of COVID-19 are vague and overlap with any respiratory illness such as the garden variety cold, influenza and a host of other bacterial infections. In such a scenario, responses should be measured and focused on catering to the most sick and needy. It is intuitive to presume that the higher mortality rate in certain countries is linked to late admission to the hospitals and delays in implementing mechanical ventilation. Because, at the end of the day, COVID-19 is a respiratory illness and the cause of death most often would be respiratory failure. So we circle back again to the need for more ventilators and well-equipped hospitals. Not all countries can build a 1000-bed hospital in 7 days but may be it is possible to do it in 30 days in a crisis such as this. Countries such as India and the US can surely aim to build at least one such hospital per state and divert critical cases there. Instead, what is happening today is suspension of routine medical care for other patients in existing hospitals in anticipation of a surge in COVID-19 cases that will bite back with viciousness, as medical care can be put off for only so long.

If the lockdown-loving leaders show the same willpower, they can easily obtain funds for new hospitals from their billionaire class. Cuba has also shown how to effectively train medical professionals and it is worth borrowing ideas from them. Rather than shutting down the economy and coming up with a stimulus package, responsible leaders with conviction would focus on diverting funds towards such productive projects that will result in long-lasting infrastructure and disaster preparedness that will also benefit future generations in fighting new illnesses. COVID-19 will not be the last of these pathogens. There will be more to come as history has shown if we look back at small pox, plague and H1N1, to name a few.

I ardently wish I am wrong but it appears that world leaders – aided and abetted by social media – have taken this too far now and only history will tell us if the aftermath of the shutdowns that many countries have implemented end up taking more lives than the dreaded virus itself. Of course, the truth may never be known, because modeling experts are already claiming victory even as the monstrosity of the lockdown is yet to unfold fully.

Nijam Gara is a doctor working in the United States.