Is the National Health Insurance Scheme in Chhattisgarh Doing More Damage Than Good?

Studies from Chhattisgarh and other states show that most private hospitals force people to pay additional money even after using health insurance.

The Rashtriya Swasthya Bima Yojana (RSBY) or the National Health Insurance Scheme, was initiated in Chhattisgarh in 2009 for below poverty line (BPL) families. In 2012, Chhattisgarh expanded the scheme to non-BPL families as well, through the Mukhyamantri Swasthya Bima Yojana (MSBY), making it a universal scheme. Under the scheme, families need to pay a one-time fee of Rs 30 for getting an insurance card and the government pays the annual insurance premium for them. From October 1, 2017, Chhattisgarh government has increased the annual insurance entitlement for hospitalisation from Rs 30,000 to Rs 50,000, as promised in its 2013 election manifesto.

Chhattisgarh is seen as a ‘well performing’ state when it comes to the national health insurance scheme. The state has achieved enrolment of around 80% of the families by issuing 55 lakh cards, with insurance claims increasing every year. While the coverage and entitlements under the scheme are expanding, the cracks in its implementation are widening. There are serious concerns that the insurance scheme may be causing more damage to the state’s health than good.

People pay from their pockets even after using ‘cashless’ insurance

RSBY/MSBY is supposed to be ‘cashless’ insurance, i.e., people are to get completely free services in public or private hospitals empanelled under the scheme. Empanelled hospitals are not supposed to ask for extra money from patients as they agree to provide services at pre-designated package rates. But studies from Chhattisgarh and other states show that the health insurance is not ensuring cashless services. Most private hospitals force people to pay additional money even after using health insurance. The malpractice by private hospitals is so common that people have starting calling it a ‘discount’, rather than a ‘cashless’ card.

The insurance scheme seems to have boosted unethical tendencies in parts of the private sector. Patients going for simple ailments are often subjected to unnecessary procedures by hospitals for maximising insurance claims. Many private hospitals in Chhattisgarh, Bihar and Andhra Pradesh removed uteruses to gain unethically from insurance.

The official enquiry on hysterectomies in Chhattisgarh reported that private hospitals had removed uteruses of poor women aged below 35 years, without due medical process.

Some women not only had their uteruses removed by hospitals using RSBY, they even had to sell their jewellery or land for extra payments.

Representation by women who underwent hysterectomies. Credit: The Hindu

In Chhattisgarh, nearly half (47%) of the deliveries in private facilities are by C-section, which raises another red flag.

Unethical practices in the private sector are not new. Through insurance scheme, the government maybe ‘incentivising’ unethical care with public funds.

Is insurance addressing the actual public health needs of the state’s population or diverting resources away from them? The most important health problems of the state include communicable diseases like malaria, respiratory infections in children, tuberculosis and leprosy and chronic diseases like hypertension, diabetes, asthma etc. The insurance scheme covers a very negligible part of treating these major morbidities. There is hardly any possibility of the insurance scheme reducing the infant or child mortality rate either.

Also read: Why India’s Poor Are Still Paying for Healthcare Despite the National Health Insurance Scheme

So what conditions are getting treated under RSBY/MSBY insurance? Last year, 50% of the total claims were for dental and ophthalmology (mainly cataract) procedures. This represents very poor value addition as free cataract surgeries were anyway amply available in the government hospitals prior to the insurance scheme. In fact, the insurance scheme led to shifting of cataract surgeries from the government to the private sector. Thus, insurance is also leading to a decline in a range of services in government hospitals. 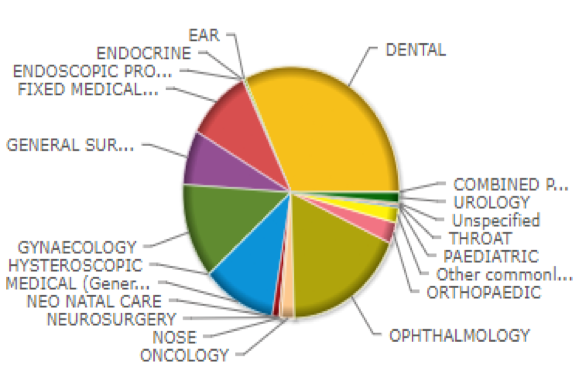 Another problem created by insurance is that many conditions that could have been treated at the primary level are getting un-necessarily transferred to the secondary or the tertiary level, resulting in what is known as the distorted pyramid of care.

Our study shows that private healthcare providers are giving a narrow and selective range of services and ‘cherry picking’ more profitable of the procedures. Their ‘preferences’ have very little match with the health needs of people. Efforts to restrict private sector from ‘cherry-picking’ or to regulate its behaviour through insurance contract have not worked. For instance, the state government had recently tried to exclude the private sector from doing dental procedures under RSBY/MSBY but had to abandon the move under pressure from the private sector. 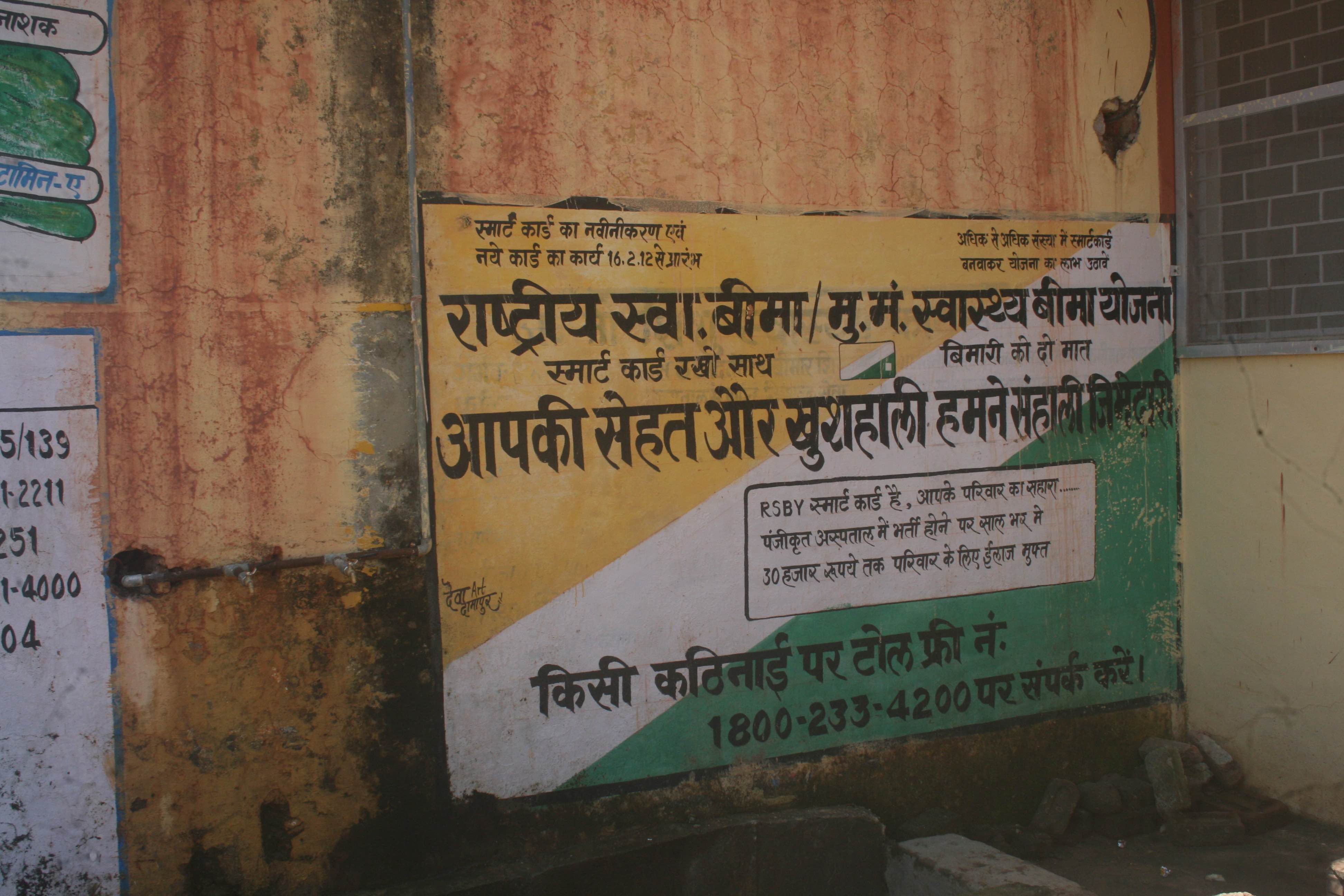 Many, especially vulnerable and tribal communities, still excluded from the scheme

Most of the vulnerable groups and tribal communities are not able to utilise the hospitalisation cover of the scheme. There are hardly any private hospitals in tribal areas. Twelve tribal districts in Surguja and Bastar divisions contributed to only 16% of total insurance claims, and that too was mostly by government hospitals. Most of the empanelled private hospitals are concentrated in the urban areas. The three big cities of Raipur, Durg and Bilaspur together contain 63% of total empanelled private facilities. Private sector remains reluctant to go to remote or rural areas as it can make more profit by being in urban areas. RSBY/MSBY has further promoted this tendency.

Many of the poor are not able to use insurance. Our study in 2014 showed that only 21% of hospitalisations of poor people from Raipur slums got covered by insurance, even though Raipur boasts of the largest number of empanelled hospitals. A 2016 study among the Baiga Particularly Vulnerable Tribal Groups (PVTGs) by the Public Health Resource Network shows that insurance was utilised in just 13% of hospitalisations. There is a looming threat of Aadhaar linkage for RSBY/MSBY which may pose further barriers for the poor.

Though RSBY/MSBY is funded by government money, it is the public sector that is losing out on funds. In 2015-16, 83% of the total Rs 386 crore claim amount went to private hospitals. Nationally too, private facilities have been receiving more than 80% of the insurance claims amount. This means that though government facilities are providing cheaper services to the poor people and remote areas, they now have to compete with private hospitals for public funds. The state’s budgets reveal that insurance scheme funds are progressively increasing as a proportion of the health budget, leaving lesser funds for the government health system which is already under-resourced. The insurance premiums keep climbing. It increased from Rs 376 per family in 2016 to Rs 816 in 2017. This year, the government will have to shell out nearly Rs 450 crore as insurance premium. 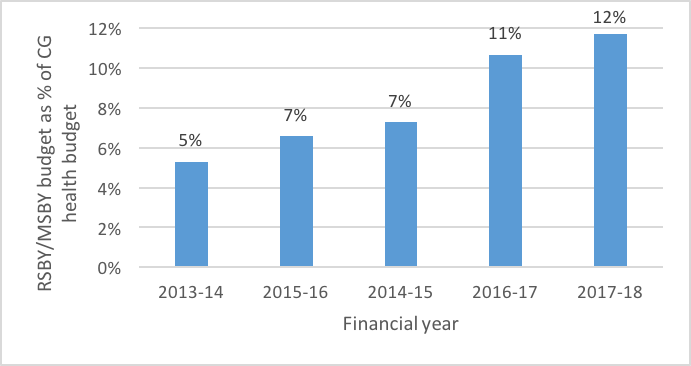 What it means for health services in Chhattisgarh and their future

Recently, a Mumbai-based senior doctor said, “this [health insurance scheme] is a sugar coated pill whose bitterness will stay with us for years to come”.

The negative impact of the insurance scheme on the public hospitals and the overall health system is still emerging. A large proportion of the poor are not able to access free and quality care and are still not protected from out of pocket payments. Insurance was introduced as a way to regulate the prices and behaviours in the health sector, but this has not happened. Recently, there have been suggestions that the insurance scheme should be extended to out-patient treatment in order to reduce expenditure borne by patients. Out-patient care is much more difficult to regulate than hospitalisation. Seeing how the insurance scheme has failed to perform on hospitalisation care, imagine the havoc that it will wreak on out-patient care. Strengthening government health systems can serve the health needs of people better than any short-cuts. For this, political intent, a belief in the government’s own system and the will for good governance are key.