"...health infrastructure is absolutely insufficient in city areas to meet the requirement of city population and in the rural areas the community health centres are virtually lacking in respect of life-saving gadgets." 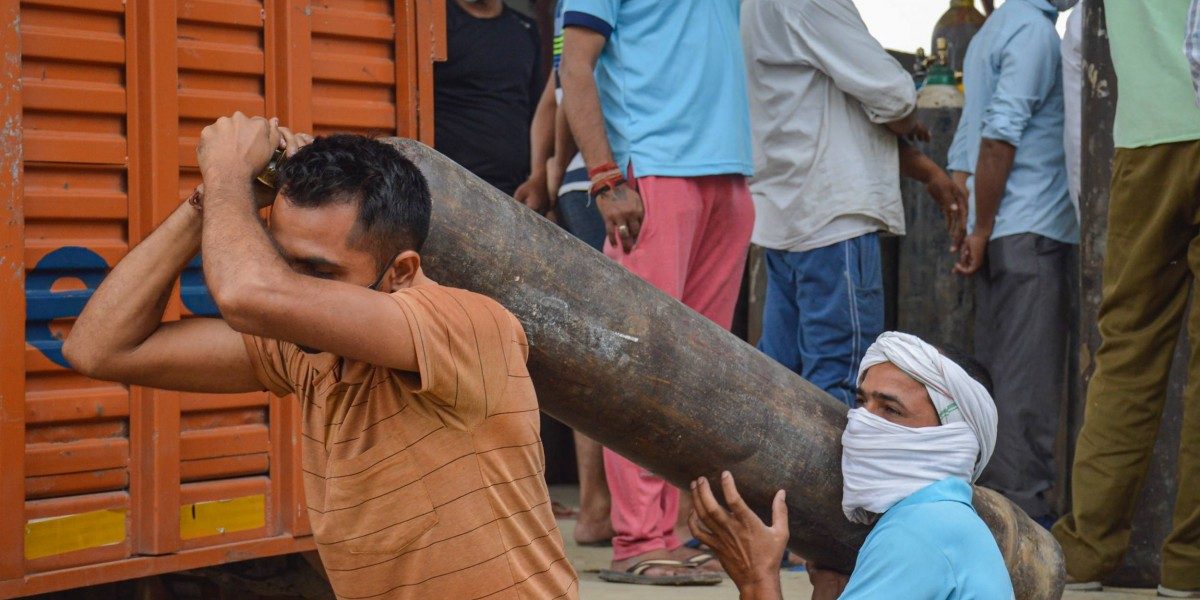 Attendees of a COVID-19 patient carry an oxygen cylinder, as demand for the gas rises due to surge in coronavirus cases, in Meerut, Thursday, May 13, 2021. Photo: PTI

New Delhi: The entire medical system in villages and small cities of Uttar Pradesh is at God’s mercy (“Ram bharose“) the Allahabad high court said on Monday while hearing a PIL over the coronavirus spread and the condition of quarantine centres in the state.

A high court bench of Justices Siddharth Verma and Ajit Kumar made the observation while taking into account the death of Santosh Kumar (64), who was admitted to an isolation ward at a Meerut hospital.

The doctors there failed to identify him and disposed of the body as unidentified, according to a probe report. Santosh had fainted at a hospital bathroom on April 22 and efforts were made to revive him but he died. The hospital staff could not identify the dead and failed to locate his file. Thus, it was taken as a case of an unidentified body. The body was packed in a bag and was disposed of, according to the probe report.

Commenting on it, the high court on Monday said if this is the state of affairs at a medical college in the city like Meerut, then the entire medical system of the state pertaining to smaller cities and villages can only be taken to be as a famous Hindi saying, ”Ram bharose”.

If doctors and paramedical staff adopt such a casual approach and show carelessness in the performance of their duty, then it is a case of serious misconduct because it is something like playing with lives of innocent people. The state needs to take stern action against those responsible, the court observed.

Also read: UP: Over 1600 Teachers Died of COVID-19 After Poll Duty for Panchayat Elections

“Upon perusal of the report submitted by district magistrates of five districts,” the court said, “we have no hesitation in observing that health infrastructure is absolutely insufficient in city areas to meet the requirement of city population and in the rural areas the community health centres are virtually lacking in respect of life-saving gadgets.”

“In district Bijnor the urban population as per 2011 census is shown to be 925312. We have no doubt in observing that it must have gone up 25% more by 2021, but to our utter surprise there is no level-3 hospital in district Bijnor. The three Government Hospitals have only 150 beds, whereas, the total of number if BIPAP machines is 5 and High Flow Nasal Cannula is only 2,” the court noted, according to Bar and Bench.

“If we take 5 the population of rural areas to be 32 lacs then since there are only 10 Community Health Centres, so one health centre has the load of 3 lac people and against 3 lac people it has only 30 beds. Meaning thereby, one CHC can cater the need of health care to only 0.01% population and there is no BIPAP machine or High Flow Nasal Cannula available. Only 17 oxygen concentrators are available with 250 oxygen cylinders against 300 beds,” it continued.

The court directed the state government to provide sufficient health care infrastructure in compliance of its direction issued earlier.

On the issue of coronavirus vaccination, the court suggested that big business houses who take benefits under taxation laws by donating to various religious organisations may be asked to divert their funds for vaccines.

Every nursing home/ hospital, which has more than 20 beds, should have at least 40 per cent of their beds as intensive care units, the court said.

Every nursing home and hospital, which has more than 30 beds, should compulsorily have an oxygen production plant, the court added.

Also read: Bodies of COVID-19 Victims Among Those Found in the Ganga: UP Official’s Letter

The bench also questioned why the government, supposedly a welfare state, was not ensuring that more vaccines were available for the population. Big medical companies which are working in the country may not have their own vaccines but they may take the formula from just any of the vaccine manufacturers in the world and start producing the vaccine, the bench suggested, according to Bar and Bench. “For that matter, one cannot understand as to why the Government of ours which is a welfare state is not trying to manufacture the vaccine itself on a large scale,” the court added.

The matter will be heard again on May 22.