What Hospitals Can Do to Curb Attacks on Resident Doctors

In a recent survey of 193 resident doctors, 61.7% had been exposed to violence by relatives, patients and/or accompanying caregivers. 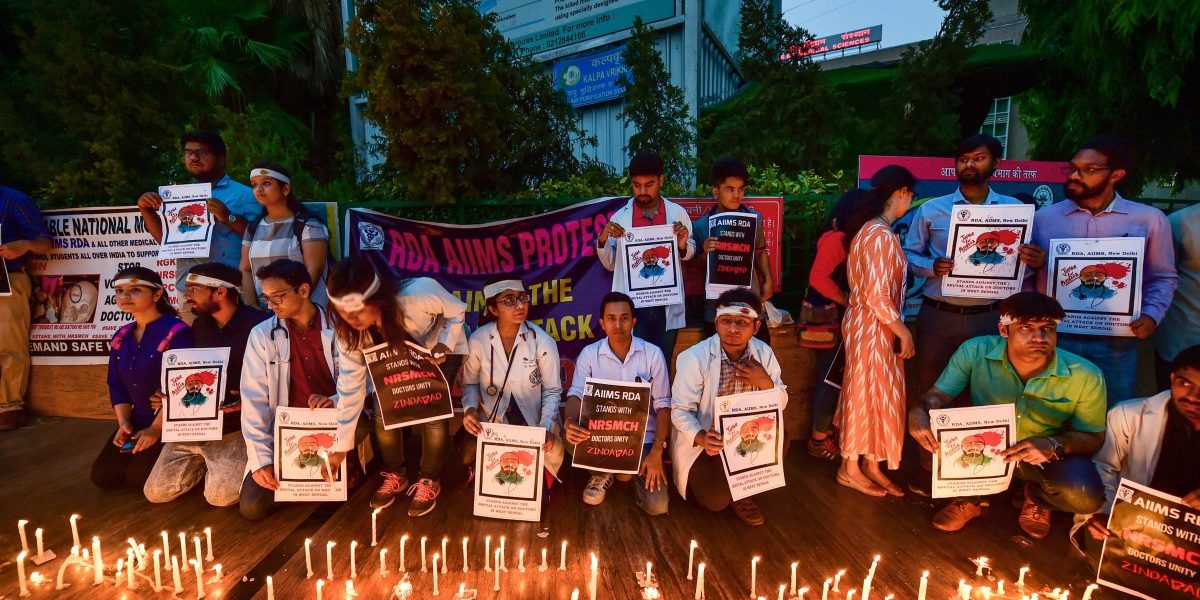 AIIMS doctors protest against the attack in Kolkata. Image: PTI

The recent attack on resident doctors following the death of a patient at the Nilratan Sarkar Medical College (NRS) in Kolkata highlights the glaring, yet often overlooked, issue of violence against foctors meted out by relatives, caregivers and patients. The World Health Organisation has estimated that between 8% and 38% of health workers will be subjected to physical abuse at some point in their career.

In a soon to be published study, conducted via online survey by the Centre for Enquiry into Health and Allied Themes, in collaboration with the King Edward Memorial Hospital and Maharashtra Association of Resident Doctors, it was found that violence against resident doctors is widespread and high. The study sought to capture the perspectives and experiences of resident doctors working in public hospitals in Maharashtra on such violence: how it affects them and their practice, and their response towards it. It also asked for doctors’ recommendations on preventing and responding to such violence.

The violence comprised several forms of abuse. Threatening (76.5%), humiliation (57.1%) and pushing/shoving (57.1%) were the most commonly reported. Assault was reported in 17.6 percent of the incidents. It was also found that it was groups (73.9%) of relatives (in 91.6% of these cases) and escorts that were largely responsible for such attacks. The presence of groups/mobs has been documented in several cases of assaults on doctors (such as the one in Kolkata last week, in the Dhule Civil Hospital in 2017, in 2018 at DY Patil Hospital in Pimpri and several other incidents).

Also read: The Notion That Doctors Are Infallible Needs to Be Broken

Residents reported violence against them even in routine medical cases (such as removal of a double-J stent and even dog bites), and not only in emergency cases. In terms of system-related factors, delay in providing care, overcrowding, long waiting time for patients and relatives, and lack of equipment and drugs were opined to contribute to such incidents. These were accompanied by the lack of effective systems in place such as a gate pass system, restriction of entry of relatives to certain areas of the hospital, etc.

Such violence affected residents personally and professionally. Residents reported avoiding giving proactive advice to relatives and patients (39.5% reported this), losing motivation at work (34.5%), developing anxiety about coming to work (35.3%), becoming fearful (36.1%), having repeated memories about the incident (20.2%) and even participating in related protests (31.9%).

When asked about their immediate response, it was disconcerting that calling seniors/hospital administration was not what they often did. The absence of a senior doctor is an issue that warrants immediate attention. Leaving the residents to deal with emergency care has been highlighted as a matter of concern by several stakeholders.

It is also important to note that 58% of the residents have reported that the hospital administration took no action in the context of the incident and several residents even reported being blamed for the incident. Merely 30% recorded a medicolegal case, which is at least some documentation of an incident of violence. Hospitals routinely register cases such as patients falling off the bed as a medicolegal case, and so it can only be apathy that assault on a doctor in hospital premises is not recorded as one.

The study points to a critical gap: the absence of formal mechanisms, protocols and policies to prevent and address violence against residents. The role of the hospital administration and the state is critical in addressing this.

Security measures such as guards, CCTV cameras, emergency alarms, etc., are very important to put in place. However, in isolation, these measures will not be effective in prevention and may even prove counter-productive. They should be a part of comprehensive strategies and policies to deal with violence in the heath sector, and be accompanied with relevant training and response protocols.

Watch: Understanding the Doctors’ Strike in Bengal and Its Political Context

It is the responsibility of the hospital administration to implement strategies to prevent overcrowding, such as a gate pass system and restricted patient entry. Senior doctors should be present at critical and sensitive times such as at the time of declaration of death or times of critical communication with patients and relatives. The study found that a majority of incidents had occurred during night duty. The availability of seniors at this hour is therefore pertinent.

The hospital administration should encourage to residents to report violence and ensure that every resident is provided support and each incident of violence reported by them is investigated. There should be a move towards filing an institutional FIR in such incidents and not left to the individual doctor.
Residents should be able to have a safe and conducive workplace. Incidents of violence against resident doctors need to be prevented, better responded to and their impact mitigated. And towards this the hospital administration needs to be firm and proactive and the institutional environment towards the issue of violence against residents needs to change and made more supportive.

Tejal Barai-Jaitly is a researcher working with the Centre for Enquiry into Health and Allied Themes on the study on violence against doctors. The author would like to thank Dr Padma Deosthali for her inputs.