India chose to risk – as it is entitled to – bowling in unhealthy conditions but that doesn't afford the team a higher moral ground. By not siding with Sri Lanka, it has in no way shown that it has superior athletes.

Day 2 of the second test match between India and Sri Lanka in New Delhi witnessed the visiting team struggle to cope with the city's baleful air. Credit: PTI 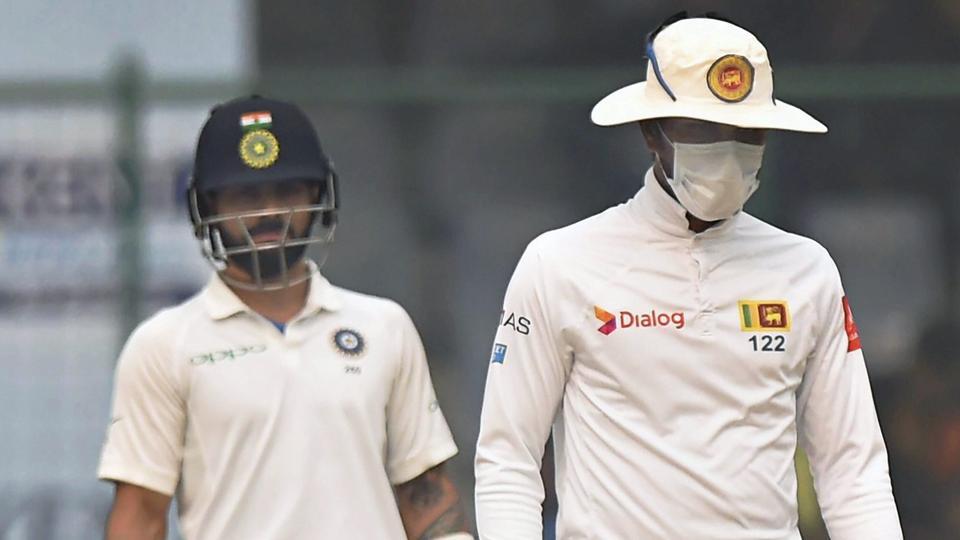 Day 2 of the second test match between India and Sri Lanka in New Delhi witnessed the visiting team struggle to cope with the city’s baleful air. Credit: PTI

Sri Lanka should not have been disrespectful to the smog. Any foreign tour brings its own set of challenges, novelties. Embrace the experience.

What did Sri Lanka think the masks were going to do? The crowd at Ferozeshah Kotla booed the visiting side, indignant. Everybody was there to watch cricket. The atrocious air quality was just the elements acting up. Get on with it now. Breathe less, if you want, but play on.

Instead, the Lankans insisted that the proceedings be suspended. Despite three interruptions that held up play for 26 minutes, the umpires Nigel Llong and Joel Wilson were at pains to insist that they did not think the situation merited a halt. Some suggested it was an unprecedented situation. That would be correct if Ranji Trophy matches hadn’t also been affected by smog in New Delhi over the past year or so.

Of course, as Sri Lanka battled an adverse situation, it was easy to note what was actually going on. Virender Sehwag, whose knowledge of science is second to none, declared from the commentary box, “Sri Lanka cricketers are hiding their face behind the mask because their performance and not due to pollution.”

Treachery. To the delightful sport that is cricket, and to the host. C.K. Khanna, the acting president of the Board of Control for Cricket in India, among the handful of administrators left at the board’s disposal, did what an aggrieved leader must do.

“If 20,000 people in the stands did not have problem and the Indian team did not face any issue, I wonder why Sri Lankan team made a big fuss. I will need to talk to the secretary and ask him to write to the Sri Lanka Cricket” (SLC).

Yes, please write to the SLC. It is the same after all – to watch and to play. Pulp the science textbooks too, while you’re at it. Eliminating the authorities who claim that air quality hurts public health could be a useful exercise as well. Start with the Central Pollution Control Board (CPCB). Its statement on Sunday, December 3, carried pesky facts.

“Exposure to such air for a prolonged period can trigger respiratory illness. The most dominant pollutants are PM2.5 and PM10. These are ultra-fine particulates, which can measure up to 30 times finer than the width of a human hair. The concentration of PM2.5 and PM10 were 223 and 383 micrograms per cubic metre at 1 pm on Sunday afternoon. The corresponding 24-hour prescribed standards are 60 and 100.”

In the letter to the SLC, it must also be stated that cricket should be stopped in case of low visibility, rains and wet conditions. Who cares if you can’t breathe properly? Who cares if Sri Lankan players left the field to vomit in the dressing room? Really, who cares?

The Indian team, of course, put on a brave face. Poor Kuldeep Yadav had to use a mask. Just giving it a try, you know. What is this fad about?

It wasn't just the Sri Lankan cricketers who had masks in Delhi. Pictured is Kuldeep Yadav #Cricket #INDvSL pic.twitter.com/dYi44lXAwK

However, Bharat Arun, India’s bowling coach, set the record straight after the end of Sunday’s play. “Virat batted close to 2 days, he didn’t need a mask. We’ve focused on what we need to do and achieve for the team. Conditions are same for both teams.” Arun also revealed that the national team’s head coach Ravi Shastri had told the umpires that play should go on.

Of course, if the Indian team wanted to battle on in those conditions, it is their prerogative. But it does not make one team superior to the other – nor does it mean that Sri Lanka was just looking for a way to avoid its on-field misery. Doctors have repeatedly said that it is harmful to organise competitive sport in Delhi right now. However, they remain mum on the question of playing in such weather and its benefits for manly virility.

Why then do the administrators persist? Medical opinion in sport has always been viewed with suspicion. Such is the overriding influence of players and coaches that practitioners can hope to work ‘freely’ only if they are willing to accept the sway held by the dominant force. This has been particularly evident in the debates around concussion in sport. Arguments by medics are generally embraced only late in the day.

This is why more than 30,000 people participated in a Delhi half-marathon last month, giving short shrift to the Indian Medical Association’s plea to call it off. Yet it is not that these arguments are alien to the discourse on the health of sportspersons. When smog affected Ranji Trophy matches in the national capital last year, the Indian cricket team’s former physio John Gloster told Wisden India, “I’d have no problems telling my players, if they were in that situation, not to go out and play. And I’m betting a majority of the medical support staff would say the same.”

Indeed, Sri Lanka’s coaching staff was clear that a team left with only 10 players on the field were putting themselves at risk. But no consideration was made for the fact that their performance was adversely impacted.

Gloster’s words from the Wisden India article are worth noting.

Because it’s an inflammatory irritant, it’s going to narrow the airway, so you’re going to struggle to breathe in more oxygen, the volume is reduced. Therefore you’ve to rely on a dilator to unconstrict the airways to breathe properly. … Subjecting an athlete to high levels of pollution for a long period of time – and they are out there for eight hours a day – your chances of picking up respiratory infections, eye infections and so on are much, much higher. How long can a fast bowler keeping running in? How many times can a batsman take singles? They won’t get enough oxygen to breathe, the muscles won’t get sufficient amount to function.

This was the worry for Delhi Dynamos, the Indian Super League team, last year and the club took express measures to ensure its players remained safe. While face masks and air purifiers are cosmetic arrangements, at least there existed an awareness of the health hazard. In the aftermath of the gloomy scenes from Ferozeshah Kotla on Sunday, Javier Ceppi, the tournament director of the FIFA under-17 World Cup took to Twitter to make an important point: “You can’t host sport events in Delhi from Diwali till end of Feb, at least. It is a fact. We had to accommodate our whole schedule to avoid it and others should also think about athletes’ health first.”

You can't host sport events in Delhi from Diwali till end of Feb, at least. It is a fact. We had to accommodate our whole schedule to avoid it and others should also think about athletes health first #DelhiSmog

The question is: How important is New Delhi to Indian or international sport? Now that the public health crisis is full-blown, should it be considered fit to host outdoor sports? In terms of cricket, and the historical heft of Ferozeshah Kotla aside, there’s certainly not much going for the venue.

But the vacuous political discourse that has come to surround our lives in recent years has ensured that there’s no agreement even on fundamental civic issues. New Delhi’s pollution problem is a lit tinderbox. A sporting contest is the least of one’s concerns at the moment. The city is unfit for public life.

For the hypernationalist, that argument may seem like a betrayal. For the politically partisan, it could be seen as a biased statement. But how else would you have it? If the national capital is in the throes of a public health crisis, you may as well betray the status quo. If a pro-environment agenda marks you out as a person with a political agenda, surely that’s an agenda worth holding. An access to a decent standard of civic life absolutely needs to be a political rallying point.

On Sunday, India chose to risk – as it is entitled to – bowling in unhealthy conditions but that does not afford the team a higher moral ground. By not siding with Sri Lanka, it has in no way shown that it has superior athletes. Instead, they have been put in harm’s way.

Only if Virat Kohli and his teammates could heed his own advice from a few weeks ago: “If we have to win this match against the pollution, we all have to come forward and fight against it. It is our responsibility to reduce the pollution levels. Especially the people from Delhi, it’s their responsibility.”

While it is not the wisest move to lay the onus on citizens when the state is turning a blind eye, perhaps the Indian team could have taken a strong stance against playing in a harmful atmosphere. Then again, there was also a match to win, and only Sri Lanka could be bothered to protest. At the end of the day’s play, the visitors must have breathed a collective sigh of relief. One only hopes that it was not on the field.

Priyansh is a freelance sports writer.