Surveillance by trained doctors and good hygiene are both missing in Turka Tachloo, a village in Kulgam where Hepatitis-A has led to the deaths of two children. Then, there is lack of faith in medicine. 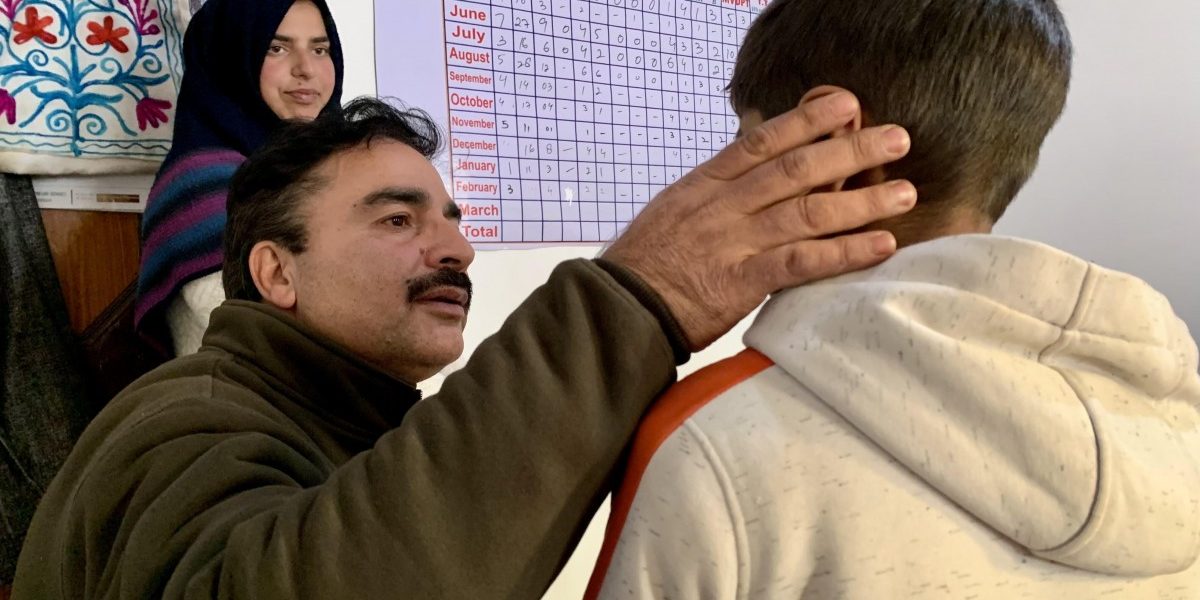 A health worker screening a young boy at the only health centre of the Turka Tachloo village. Photo: Jehangir Ali.

The Altafs live in the Turka Tachloo village of south Kashmir’s Kulgam district and were worried about Afaan.

In early December, Afaan’s father Mohammad Altaf – a farmer by profession – decided to visit the Maternity and Child Care hospital in Anantnag town.

“But the doctors there couldn’t make him better. They said that it was up to god, so I thought why not settle the matter with God myself. On the next morning, I took him to Srinagar,” said Altaf, a farmer, who has another boy who is 18 months old.

Official records show that Afaan had tested positive for Hepatitis-A on December 3 following an outbreak of the viral infection in Turka Tachloo. The village comprises about 240 households, most of which are poor and depend on agriculture. It is located 54 kilometres from Srinagar.

A tightly woven cluster of new, modest houses springing up between old structures, the village, whose boundaries seems to have expanded in recent years, is surrounded by expansive paddy fields. Some of the villagers own some of the paddy land, but most of them don’t, and work as labourers. Vishow, a major tributary of Jhelum, forms the village’s northwestern boundary, providing drinking water and also irrigating its paddy fields. A local official said that poor sanitation and lack of hygiene in the village, where nearly half of the population is illiterate, may have contributed to the hepatitis outbreak. According to doctors, the water-borne infection is transmitted through faecal-oral route and the virus can survive for months in favourable conditions.

Locals in Turka Tachloo, however, blamed the administration for negligence which allowed the infected water to reach the village, even though the chlorination process followed by the government’s water filtration plants can’t kill the hepatitis-A virus.

“The condition is so bad that on some days, filthy water comes out of taps. Our elders raised the issue with officials but no one paid any attention,” said Mubashir Maqsood, an engineering graduate from the village.

“Sometimes the tap water is so dirty that you can’t see through it. After collecting it in a container, I keep it aside for some time so that impurities can settle down. What alternatives do we have?,” a woman, who didn’t want to be identified, chipped in.

The government of India rolled out ‘Drinking water quality testing, monitoring and surveillance framework and guidelines’ in March last year under which a network of ‘National Accreditation Board for Testing and Calibration Laboratories’ (NABL) accredited labs were to be set up in every state, district and block over the next year.

The Union government also set aside two% of its Rs 3.6-lakh-crore Jal Jeevan budget for monitoring water quality across the country.

But the ground situation in J&K paints a dismal picture.

While the Union Territory has 98 testing laboratories, only three are accredited by NABL, according to the Union government’s Jal Jeevan Mission, implying that the other labs are not equipped to certify the quality of drinking water and raising questions over the credibility of official water testing mechanisms.

A senior official in J&K administration said that Jal Shakti and Health departments run several testing centres across J&K. Shaleen Kabra, commissioner secretary of Jal Shakti, the nodal department for implementing the national framework in J&K, didn’t respond to queries from The Wire about the progress on NABL-accredited labs and the administration’s water testing protocol.

On the ground, after a flurry of visits by top district health and civil officials, the administration has deployed special teams of doctors, local healthcare workers and volunteers to carry door-to-door surveys in Turka Tachloo for screening the population. Four more positive cases have been reported.

Dr Mushtaq Ahmad Rather, Director Health Services (Kashmir) told The Wire that 1,444 persons including children have been screened since the outbreak and more than 300 blood samples have been tested. “From the last two days, there are no positive cases,” Dr Rather said, adding that most patients are students of a village school.

Dr Rather said that the administration is organising awareness campaigns involving community elders and religious activists of the village to encourage people to use boiled water for drinking and cooking purposes. “We are keeping a close eye on the situation,” he said.

But the government’s initiatives don’t seem to be translating into action on ground. While the infection is water-borne, baby diapers soiled by faecal matter remain strewn along with plastic bags filled with garbage and uneaten food items on the banks of Vishaw, which supplies drinking water to Turka Tachloo. 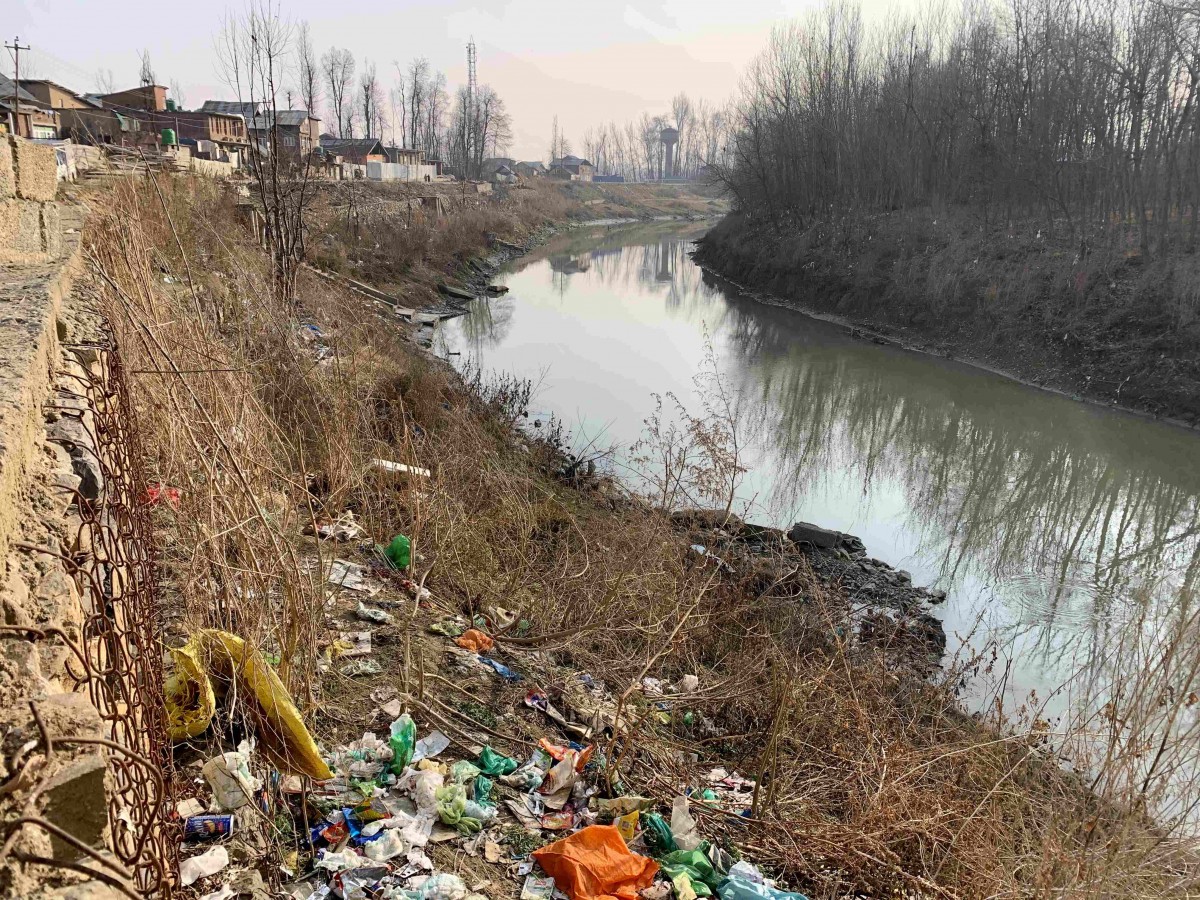 The banks of Vishow river, which provides drinking water to the village, strewn with soiled diapers and other garbage. Photo: Jehangir Ali

“The villagers continue to use the river as a garbage dumping site, putting themselves and others at risk,” said a health department official, who is not authorised to speak with the media. The local administration has lifted three water samples from the village for testing. While one sample has returned negative, the result of the other two are awaited.

“It is the duty of the government to provide us with pure water. If the water is infected, doesn’t it mean the government is poisoning us? Is the government not accountable to people?” Muzaffar Rehman, a villager, asked.

Anguished by his son’s condition, Altaf who is mentioned at the beginning of this report, fled the hospital in Anantnag against the advice of doctors earlier this month and sought treatment from a traditional faith healer in Srinagar’s Dhara village, a popular address in Kashmir for newborns with severe jaundice and even adult patients with liver dysfunction.

The village is nestled in the foothills of Srinagar’s Zabarwan mountain range. A faith healer there is known to put his patients on a dose of herbal medicines and a lot of prayers. Afaan was one of these patients.

“His condition improved. The level (of bilirubin) went down from 26 to 24 within a day,” Altaf recalled outside his rundown home. The normal ‘total bilirubin’ level for under-18 males is 1 mg/dL.

On the night of December 9, Altaf’s belief in faith healers shattered when Afaan’s condition deteriorated. During an episode of seizure, a condition associated with hepatic encephalopathy, a brain disorder caused by liver failure, he bit his own tongue, cutting and lacerating it badly.

Shocked by the turn of events, he again rushed his son to Anantnag hospital. Doctors there, referred him to Srinagar’s super-speciality ‘Sher-e-Kashmir Institute of Medical Sciences’. The kindergarten student was later admitted to the Children’s Hospital in Srinagar on December 9. The next evening, Afaan’s condition deteriorated further and he slipped into a coma.

“The child had developed encephalitis. He was put on life support but we could not save him,” Dr Rather told The Wire.

Afaan was the second child from Turka Tachloo village who fell prey to the viral infection. On December 7, two days before he was admitted at the children’s hospital, four-year-old Maira Gulzar, daughter of Gulzar Ahmad, a private cab driver, also passed away due to liver dysfunction due to Hepatitis-A infection. Father of Maira Gulzar showing her photo. The three-year-old girl was second victim of the viral outbreak. Photo: Jehangir Ali

The death of two minors has triggered panic in the village and the deep-rooted belief in faith healers has also taken a hit.

“Had he not fled the hospital, his son could have been alive,” said a villager, wishing not to be named.

More villagers, including women, are turning up at the only health centre to get themselves checked by a team of three doctors who are monitoring the situation with the help of healthcare workers and local volunteers. “I have an ache in the stomach. I want to get tested,” a young woman said to a visiting doctor who counselled her on the hepatitis outbreak, urging her to watch out for symptoms in her family.

Altaf seems to be reconciling with his son’s sudden demise – “it was god’s will and we couldn’t have changed it” – but is discomfited by the mention of the faith healer. “It won’t bring back my son,” he said. 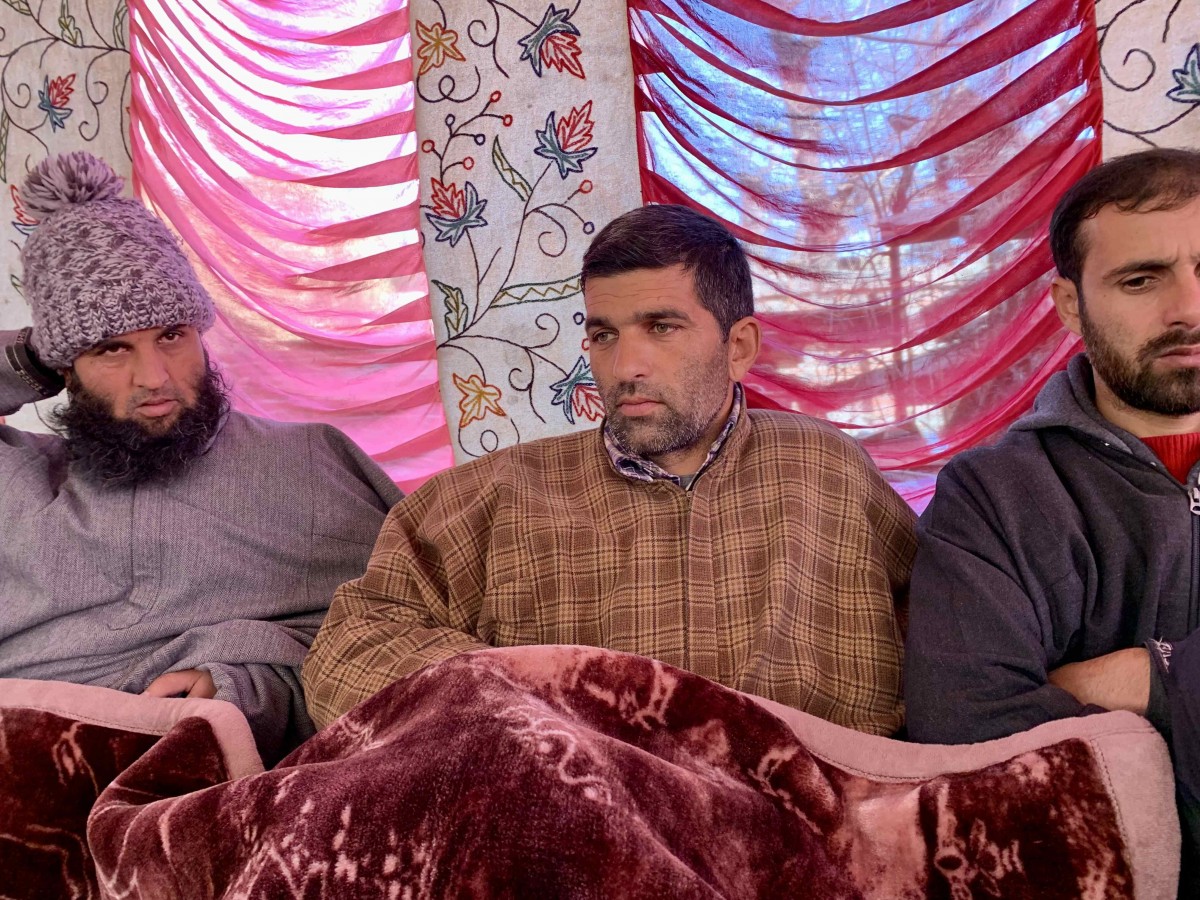 Altaf Ahmad, father of Afaan Altaf, one of the two minors who died in the outbreak, in a tent for mourners outside his house. Photo: Jehangir Ali

Dr Tariq Qureshi, who heads the childcare hospital in Anantnag, said that Afaan’s life could have been saved if his father had not gone against the advice of doctors and continued the treatment.

“It is unfortunate, but many people in Kashmir continue to believe in faith healers. Even the well-educated ones believe in these practices,” he said.

Dr Salim Khan, who heads the Social and Preventive Medicine department at Srinagar’s SHMS hospital said that a patient infected by hepatitis A presents with symptoms of body aches, loss of appetite and abdominal pain which correlate with viral infection symptoms.

“Initially a patient doesn’t present with jaundice symptoms and the bilirubin levels are also not raised at this time. People usually neglect these symptoms. It is a self-limiting disease which is treated symptomatically and most of the patients recover on their own. But if the disease progresses, jaundice sets in and in children it can also affect the brain leading to viral encephalitis,” he told The Wire.

He said that the patients need to be monitored by doctors and parents constantly, “More than doctors, it is surveillance and good hygiene which can limit the spread of the disease.”

A ‘Health and Wellness Centre’ has been set up under the National Health Policy of 2017 in Turka Tachloo led by a community health officer and a small team of health workers to “address communicable and non-communicable diseases and services for elderly and palliative care.” 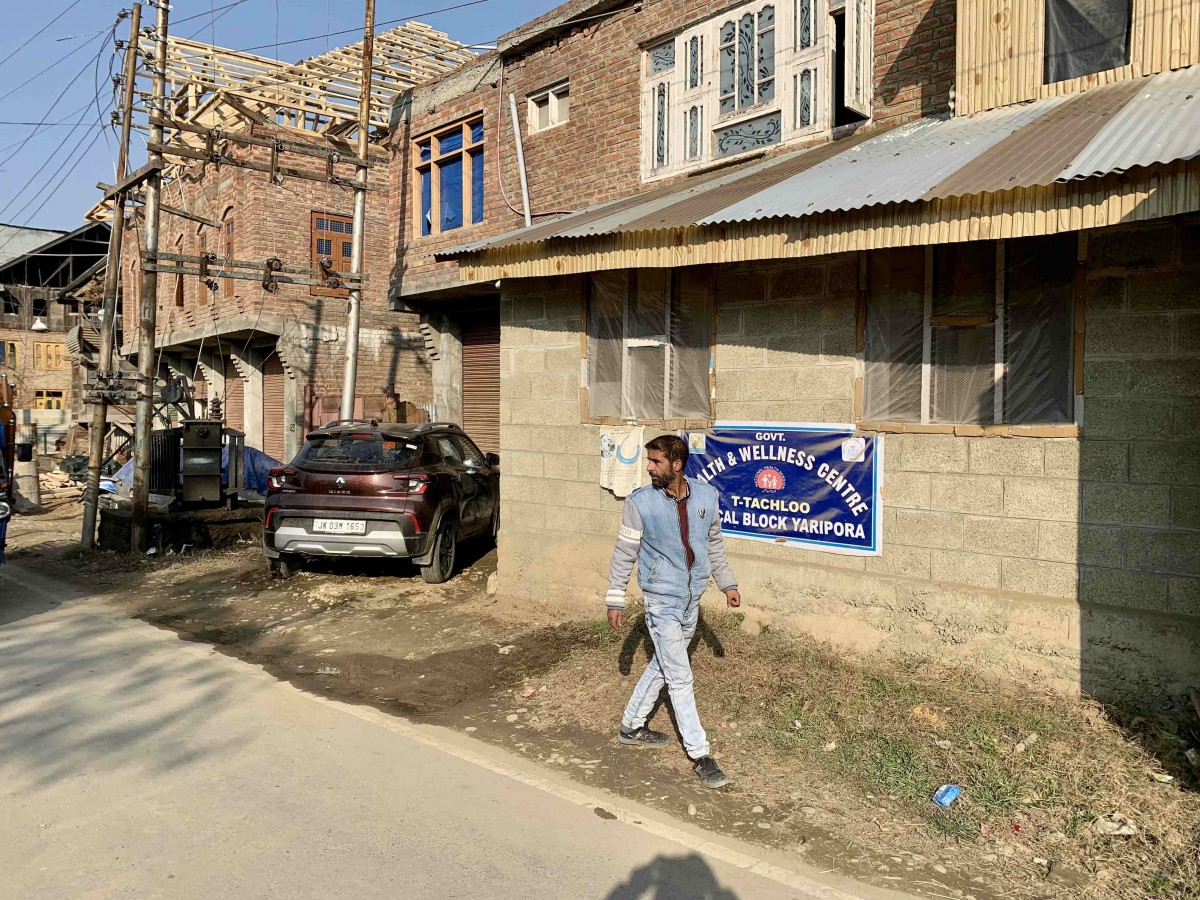 A senior health department official in J&K, who didn’t want to be named, said that the health officers often confuse the symptoms of hepatitis with viral infection.

“If trained doctors are posted at the wellness centres instead of health officers, who have a limited scope of practice, such outbreaks could be prevented in future. Also, the water testing mechanism used across the country isn’t so advanced to test the presence of viruses such as hepatitis-A, putting people at risk of catching water-borne viral diseases,” he said.