In Kalyan, 50 km from Mumbai, doctors at two municipal corporations have received nothing but flimsy, reusable masks.

Kalyan (Thane): In the brightly-lit casualty ward no. 18 of Rukmanibai Hospital in Kalyan, a young doctor in his 30s sits with a slouch, exhausted. A flimsy, single-layer green cotton cloth clings sloppily to his face. He uses his bare hands to adjust it several times and, in the process, inadvertently touches his face.

There are no gloves or any other kind of protective gear available. The green, reusable surgical mask is all that he and 34 other doctors of two municipal corporation hospitals – Rukminibai and Shastri Nagar – have been given by the Kalyan Dombivli Municipal Corporation (KDMC) to “combat” the expanding coronavirus pandemic in the country.

“We are all going to be infected, a few of us might even die. We are only waiting for our turn,” the doctor tells me as he prepares to handle another 20 patients lined outside his outpatient department. He had already clocked in over 11 hours and was hoping to call it a day in an hour.

The corporation, as per the requirement list drawn in 1992, should have a minimum of 135 doctors. However, a mere 35 doctors have been handling the city’s sick for nearly a decade. Among them, most are gynaecologists and some are MBBS doctors. The corporation doesn’t have an epidemiologist.

The work hours for the doctors and other medical staff have always been long but in the past month, they have been working around the clock, with some day shifts extending 15 to 18 hours.

“We’ve been handling an influx of anywhere from 150 to 300 patients on a daily basis. The patients come here for a plethora of problems ranging from respiratory illness to heart ailments. We have been examining them all by just wearing this useless mask,” a doctor at the Shastri Nagar hospital said.

Also read: ‘Hunger Can Kill Us Before the Virus’: Migrant Workers on the March During Lockdown

The twin cities of Kalyan and Dombivli, nearly 50 km from Mumbai, have seen phenomenal growth in the past decade. As infrastructure facilities got better, the population exploded too. From a population of 12.46 lakh in the 2011 census, the two cities including their 12 surrounding villages now hold nearly 25 lakh people.

Kalyan and Dombivli have already reported six positive cases of COVID-19. Among them, at least four people had walked into the premises of the two hospitals in the last two weeks, before being referred to Mumbai’s Kasturba Hospital.

With no protocols followed and zero facilities made available, the doctors, nurses, ward boys and sanitation workers are dealing with the situation with a high risk of getting exposed to infection. The doctors that The Wire spoke to at both Shastri Nagar and Rukminibai hospitals say they have been fighting a lost battle.

“Two weeks ago, when we were handed over this green cloth as safety gear, we had protested. But the chief medical officer had told us to “wash and reuse”. We have been doing that since,” said a doctor of medicine (MD) posted at Shastri Nagar. 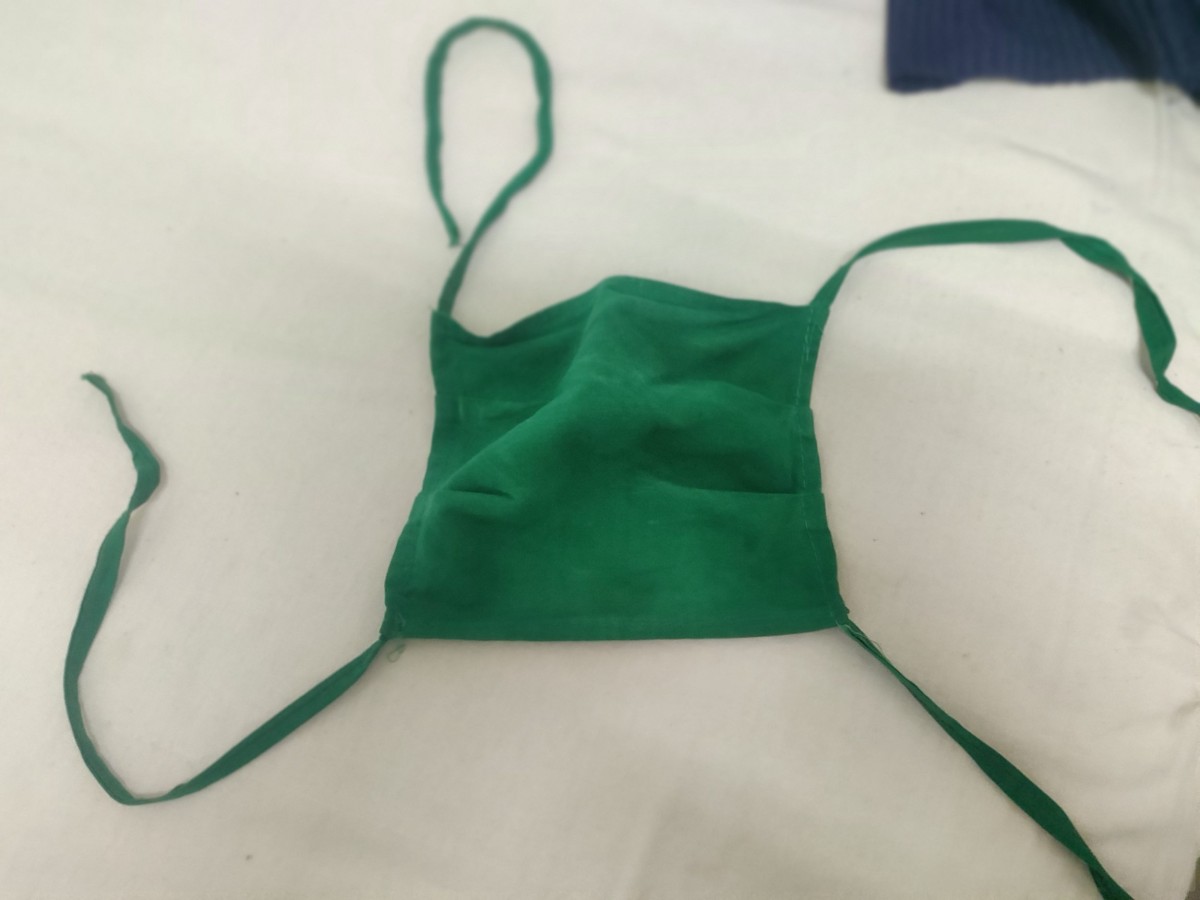 Green masks given to all doctors at Rukminibai and Shastri Nagar hospitals run by KDMC. Photo: Sukanya Shantha

These patients, as in other government facilities, come from the most impoverished sections of society. But with the entry of coronavirus into the city’s population, things changed.

Government facilities have been made the first point of medical care, and several middle- and upper-class persons are forced to turn to public health services for diagnosis.

The “casualty diary” placed at the helpline desk at the entrance of Rukminibai Hospital indicates at least 37 persons, mainly with a travel history, have either walked into the hospital or called their helpline numbers. Most of them complained of a cold, cough and fatigue. At least 3-4 of them had travelled to Spain – one of the worst-affected countries so far in this pandemic. Others had returned from the US, Dubai and other Asian countries. A diary has been maintained at the Shastri Nagar Hospital too, with more or less a similar number of walk-in patients.

Both hospitals have converted their casualty ward phones into helpline numbers. They receive an average of 250-300 calls on a daily basis. The centres have deputed health workers to answer calls and take down suggestions. At night, when the health workers are not available, doctors double up as telephone operators.

“Ideally, a doctor should be given a dedicated job of taking down symptoms and documenting every small detail. But look at this. There are callers who have clearly talked of their travel history and have complained of coughing and breathlessness, and the operator has only suggested that they isolate for 14 days,” a doctor says, showing a note in the diary.

The busiest of all, the OPD, is where people are seen queueing up in the first half of the day. Here, all patients, irrespective of their symptoms, are checked by the doctor on duty. With no segregation in place, the doctors say they are finding it difficult to take any kind of precautions.

“We have been asking for a special OPD centre only to handle cases of cold, influenza and other symptoms related to the new coronavirus. These symptoms are specific and if a dedicated set up is readied, the possibility of infection can certainly be brought under control,” a doctor said.

Earlier this week, the Ministry of Health and Family Welfare (MoHFW) issued guidelines on the “rational use of Personal Protection Equipment (PPE)” for emergency medical relief. The guidelines have clearly specified that all hospitals should identify a separate triage and holding area for patients with influenza-like illnesses. The guidelines continue to be flouted.

A diary maintained at the twin KDMC hospitals has notes on all those who have visited the centre or called complaining of COVID-19 symptoms. Photo: Sukanya Shantha

According to the MoHFW guidelines, doctors, other support medical staff and sanitary staff working in the OPD in a hospital setting fall under the “moderate risk” category. For them, the recommended PPE are N95 masks and gloves. Similar facilities are to be made available even to the patients walking into the hospital. Along with a dedicated screening area, the hospitals are also required to set up a “temperature recording station” right at the entrance. Doctors have been directed to record temperatures with hand-held thermal recorders. But this reporter found that all temperatures were recorded using the conventional mercury thermometer, by placing it under the patients’ tongue.

Those handling the ICU, patients with severe acute respiratory infection (SARI), sample collections and autopsy have to be provided the complete PPE which includes goggles, face-shield, mask, gloves, coverall/gowns (with or without aprons), head cover and shoe cover. Multiple senior doctors at the hospital have confirmed that these PPEs have not been made available to them.

A doctor also said that PPE has remained conspicuously absent in the past, even while dealing with other high-risk patients, like those who are HIV positive.

Another doctor, who has had at least 8-9 days of OPD duty since the outbreak of COVID-19 in Kalyan, told The Wire that the hospitals are yet to ascertain which doctor among them had checked on the patients who later tested positive. “Each time the numbers are updated and we find out that a patient referred from our hospital has tested positive, we panic. We have all been told to inform the centre if we develop any symptoms. Besides that, no other precautions have been taken, leave alone isolating or testing the doctors,” a senior doctor shared.

Some doctors said that they have started taking their own precautions and isolating themselves at home. One said he has moved his son to his parent’s house and has not seen his child in a fortnight. “We can all be carriers. It’s a miracle that we haven’t fallen sick as yet. It is just a matter of time before we go the Bhilwara way,” one doctor told The Wire. The doctor was referring to the alleged case of negligence in Bhilwara district which has now over 20 positive cases and at least one reported death.

An isolation room with five beds has been created in both hospitals. At Rukminibai Hospital, the tuberculosis ward on the second floor of the two-storey building has been converted into an isolation ward. Both isolation centres have not had a single patient so far. When this reporter visited, the isolation wards at both centres were locked. A doctor on duty at Shastri Nagar Hospital admitted that these structures mostly exist on paper.

“There are several modalities put in place. The patients are supposed to be accommodated in a ‘Negative Pressure Isolation room’. A ventilator and a series of other life-saving equipment needs to be made available in the room. Since we have none, the room remains locked,” said a doctor placed at the male ward adjacent to the isolation centre.

An isolation room is used to separate individuals who are ill and suspected or confirmed to have COVID-19. All suspected cases detected in the containment/buffer zones (till a diagnosis is made) are to be hospitalised and kept in a designated facility till they test negative. But the twin hospitals have been sending patients away to Kasturba Hospital, defying the protocol.

A diary maintained at the twin KDMC hospitals has notes on all those who have visited the centre or called complaining of COVID-19 symptoms. Photo: Sukanya Shantha

The National Centre for Disease Control has listed 23 essential items, including eye protection, a face shield, hair covers, gowns/aprons etc., to be compulsorily made available to keep an isolation centre running. None of them have been made available at these twin centres, a senior doctor has confirmed.

The corporation gives a special fund of Rs 5 lakhs to these hospitals for purchases of essential items. But this fund remains unutilised.

The Wire spoke to Dr Sandeep Nimbalkar, a reproductive and child health (RCH) officer with the municipal corporation. In the over-15-minute conversation, Nimbalkar listed a whole list of precautions and measures taken to secure the two hospitals. “We have several protective gears, masks and gloves available for each of our staffs. We have been taking special care to segregate and treat patients with a cold and cough separately,” Nimbalkar claimed in the telephonic conversation.

He also said that as soon as the patients were tested positive, doctors were identified and precautions were taken. “None of them have shown any symptoms,” he declared. But as the reporter spoke to Nimbalkar about her visit to the two facilities and the innumerable accounts gathered during the visit, Nimbalkar said that the state has imposed the Epidemic Diseases Act and the news can lead to panic situation in the state. “Action can be taken for publishing such news,” he warned, before directing the reporter to the corporation’s public relations officer ,Madhavi Pophale.

Pophale, while declining to take any medical questions, told The Wire that on March 24, right when the state went under a complete lockdown, the corporation had held scheduled interviews to fill up the doctors’ vacancies. Pophale also added that as many as 75 doctors from the Indian Medical Association have stepped in to help KDMC in handling COVID-19 cases. “Along with that, we have also appealed to retired but physically fit doctors to help us in this time of crisis,” she said.

The Wire has tried to contact the corporation’s commissioner, Vijay Suryavanshi, and the story will be updated once he responds.