'Herd Immunity Is the Only Lasting Solution to the Coronavirus', Says Leading Epidemiologist

In an interview to The Wire, Dr Jayaprakash Muliyil says India has no alternative but to build herd immunity. "A lockdown only buys time, the prime minister opted for an easy choice". 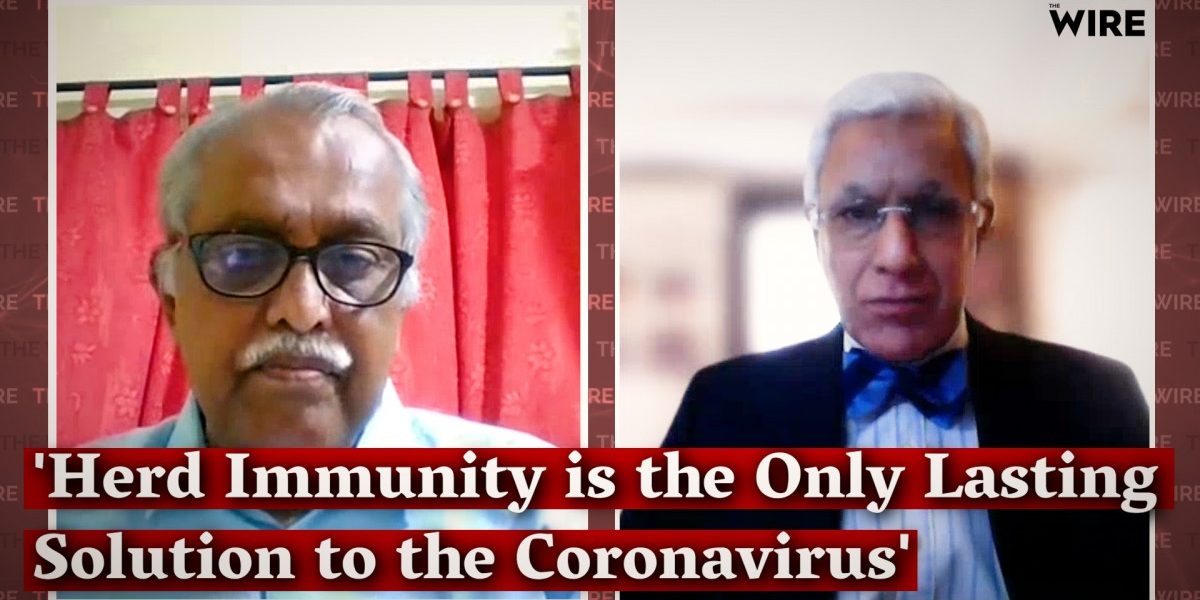 New Delhi: On a day the prime minister extended the national lockdown till May 3 and said this was needed to fight COVID-19, one of India’s most highly regarded epidemiologists says “herd immunity is the only lasting solution to coronavirus”. Jayaprakash Muliyil, chairman of the Scientific Advisory Committee of the National Institute of Epidemiology and former principal of the Christian Medical College in Vellore says: “There is no alternative to herd immunity.”

In an interview to Karan Thapar for The Wire, Dr Muliyil said that in a lockdown we are not confronting the virus but simply trying to hide from it. Once the lockdown is lifted, the virus, which has not disappeared, will hit us again. The only way a lockdown can be an effective defence against the virus is if it continues for a year or more till a vaccine is discovered. But that is a prospect no one can even consider.

Dr Muliyil told The Wire that herd immunity means allowing India’s young population to expose themselves to the virus and build up immunity. He said a good guesstimate is that approximately 60% will have to acquire immunity for herd immunity to be effective. At that point, it will also cover the elderly, who are most at risk.

In trying to build herd immunity, Dr Muliyil says India has a great advantage over countries like the US, UK, Italy, Spain and France because of the age profile of its population. Close to 90% of Indians are under 60. He says the experience of the virus in all other countries has established that people under 60, because of their resilience, either do not get infected or are infected only sub-clinically.

However, a small percentage of this age group will develop the disease and an even smaller fraction of them will die (Which in India may still amount to a few lakh people). Dr Muliyil agreed that this is “the cost” that has to be paid to keep the rest of India safe. He accepted this is “the sacrifice” India is asking of its young population so that the country as a whole can survive.

Dr Muliyil said two very important concerns need to be borne in mind as India attempts to build herd immunity. First, the elderly have to be protected by isolating them from the young. He accepted that in India where, in urban slums or villages, families live together in one room, it would be difficult to separate from the young but this needs to be tackled innovatively. In rural India, the elderly could be encouraged to sleep outdoors. In slums, the percentage of the population over 60 is very small. “Unlike rich Indians, poor Indians do not live long lives,” said Dr Muliyill about the “sad reality of India”.

Second, Dr Muliyil said that whilst attempting herd immunity, every attempt must be made to ramp up the country’s health facilities. He added that if the elderly are protected, then the health facilities, as they are, should be able to handle the small number of young who fall ill and ensure their treatment and survival.

He said that whilst India tries to build herd immunity, big gatherings must continue to be banned. This means cinemas, theatres, malls, gyms and restaurants must stay closed.

However, when questioned whether Prime Minister Modi made a mistake extending the lockdown till May 3, with increased severity during the first week, Dr Muliyil shied away from saying it was a mistake. Instead, he agreed the PM had opted for “the easier choice.” Keeping the country under lockdown was an easier choice than the tougher one of creating conditions for building herd immunity. But, eventually, that has to be done.

Dr Muliyil said the first 21-day lockdown had in some states – but not all – reduced the rate of growth of the infection. More importantly, it had, in a dramatic and unforgettable way, communicated to the Indian people the seriousness and danger of the disease. This communication, which may not have been possible otherwise, is a critical base upon which an attempt to build herd immunity can be tried.