In August, 7 lakh patients visited the OPDs of various hospitals – a signifiant drop compared to past years. 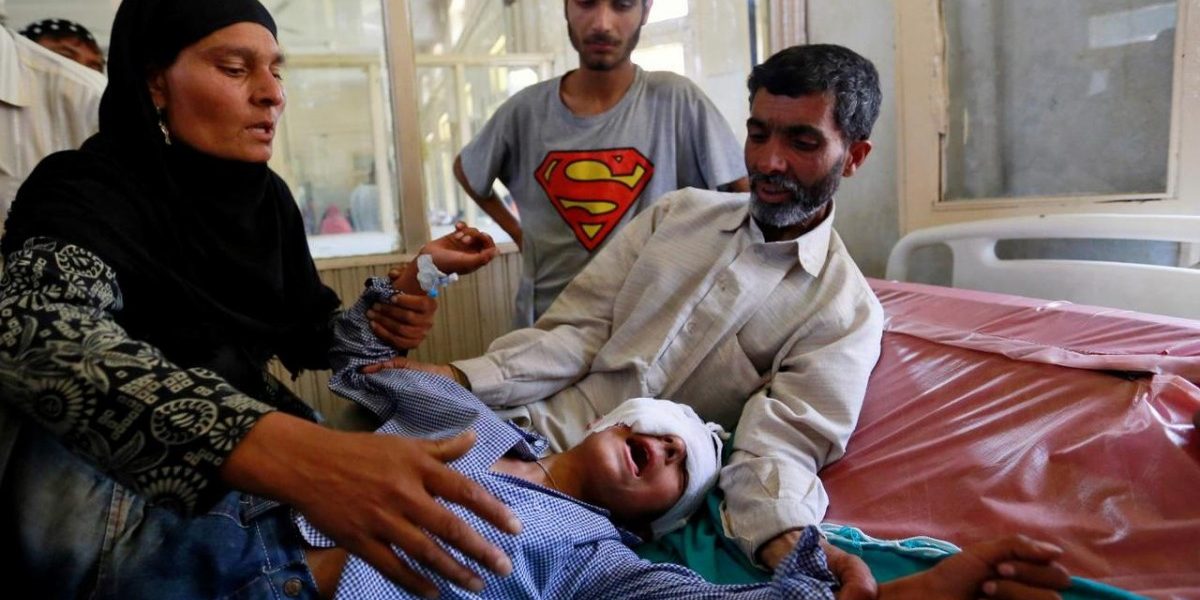 Parents comfort their son whom they say was injured by pellets shot by security forces in Srinagar, August 18, 2016. Photo: Reuters/Cathal McNaughton

New Delhi: According to news reports, a government release says that Kashmir has seen 7 lakh patients visit the out-patient department (OPD) of various hospitals in the month of August. However, in an official tweet on September 2, the Jammu and Kashmir information department had put the number of  OPD visits at ‘district hospitals’ in Kashmir at 2.5 lakh. It gave no figure for OPD visits in Kashmir’s cities but said the Sher-e-Kashmir Institute had seen 30,000 visits.

Even if the 7 lakh figure is taken at face value, this official number conveys little. But seen in relation to figures for hospital usage for previous years, the August statistic is low and appears to be a reflection not of a surprising and sudden improvement in healthcare in Kashmir but of the ongoing lockdown in the region – with unwell people simply being unable to access healthcare.

Last month, the Union government via parliament revoked Jammu and Kashmir’s special status and divided the state into two Union territories. The Centre has also deployed more troops, put in place restrictions on the movement of people, and shut down all communication channels including the internet. Now in its fourth week, the lockdown has also heavily affected medical services and access to health facilities.

The Wire has reported on the condition of pellet injury victims at Sri Maharaj Hari Singh Hospital in Srinagar – victims whose existence the government initially sought to deny by saying there had been no major protests or injuries.

But the out-patient department figures are low when compared to the monthly average of previous years.

The same report says that the numbers in rural Jammu and Kashmir for OPD usage shot up to 1.36 crore in 2016-2017. This is an average of 11.33 lakh people in just the rural parts of the state, who used OPD facilities.

Another news report says that in 2017-2018, rural and urban parts of Jammu and Kashmir saw 2.39 crore people using OPD facilities. This is an average of 20 lakh people a month, across the state. Though that figure is for the whole of J&K while the administration’s latest claims are for Kashmir alone, applying Kashmir’s share of the undivided state’s population (7 million out of 12.6 million) suggests the OPD visits figure for 2017-18 in Kashmir was 11 lakh, considerably higher than the 7 lakh officially claimed for August.

The Wire has been reporting on the healthcare crisis happening in the ongoing lockdown of Kashmir. For example, some victims of pellet injuries have been forced to treat themselves. One Kashmiri doctor who spoke to the media about the disruptions to health services was briefly detained. Several reports by media organisations, quoting actual patients in Srinagar, have spoken about the shortage of life saving drugs and procedures like dialysis. The Union home ministry denied this.

The Lancet medical journal also published a note raising concerns about the humanitarian crisis in Kashmir. This triggered a number of Indian doctors to criticise and oppose the Lancet for weighing in on the issue. Other Indian doctors have issued statements of solidarity with those in Kashmir and have called for the government to urgently restore essential services.