New Delhi: An analysis of the government’s budget allocation on major items shows that India continues to spend approximately five times more on defence than on health care.

The other areas that get six-digit funding like defence and interest on borrowings are: pensions, food subsidies, agriculture, home affairs, rural development, tax administration, transfers to states and transport. 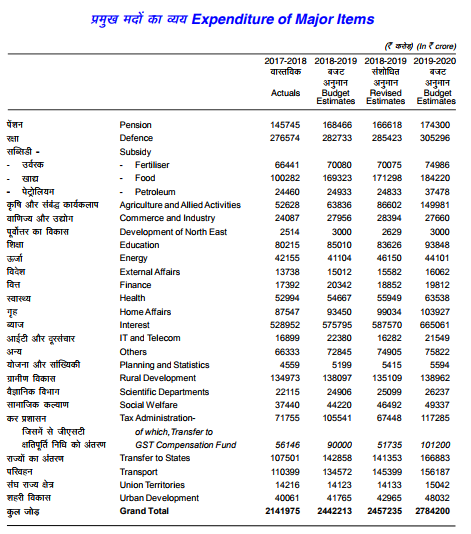 While this increase, when seen as an isolated percentage may seem impressive, the figures can be concerning when seen in relation to India’s budget on other areas such as defence, and the fact that health gets only the 14th place in terms of budgetary priorities.

Health spending is also a concern when the health budget is analysed for its internal components.

Core health areas like the National Health Mission (NHM) have seen drops in their funding, over the last few budgets, including this one. This comes even as a big flush of money has been pumped into the Ayushman Bharat health insurance scheme, where the budget has gone from Rs 2,000 crore to Rs 6,400 crore. The NHM has been allocated Rs 31,744 crore this year, which is nearly half of the entire health budget of Rs 63,538 crore.

According to an analysis by the Accountability Initiative for the financial year 2017-2018 and 2018-2019, allocations for NHM declined by 2 %. NHM’s share as a total of the health ministry’s allocations went down from 58% to 55%.

And a further analysis of the various components of the overall health budget and the NHM budget show that this drop is primarily coming from the government pulling out funds from the vital components of maternal, reproductive and child health and from communicable diseases.

In these previous two budgets, funding for reproductive and child health fell by 30% and funding for communicable diseases fell by 27%.

This is despite acting finance minister Piyush Goyal, saying towards the end of his budget speech, that a healthy India will be “built with the participation of women.” He also said that India must not have just women’s development, but must have “women-led development,” while talking about the health of women.