In the 19th century, fierce opposition from Indians to epidemic control measures forced British officials to reach out to community leaders for help. This could help India tackle the COVID-19 pandemic.

Doctor Simmonds injecting his curative serum in a plague patient, during the outbreak of bubonic plague in Karachi, India. Photo: Wellcome Collection gallery/Wikimedia Commons, CC BY 4.0

There are many terrains where public health and religion cross paths, but epidemics are certainly the most bumpy. Contemporary examples include the large gatherings of people at several religious sites in India, including the Nizamuddin markaz and an Akkalkot temple, despite public health appeals to the contrary. In the past too, religion featured prominently in official and unofficial conversations on epidemic control, and influenced government policies against the two great epidemic diseases of the 19th century: cholera and plague.

In a racialised phrasing similar to the ‘Chinese virus’, cholera in the 1800s was called, in Europe and America, either ‘Asiatic cholera’ or ‘Indian cholera’. The early officially noticed epidemics started in eastern India, and along with that also began the convenient scapegoating of Indians for any cholera trouble in the West. While the Gangetic towns in Bengal were blamed for the origins of the disease, religious gatherings in other parts (Haridwar, Puri, Pandharpur) and in western Asia (Mecca) were blamed for its eventual spread into the West.

When people wrote about the ‘Oriental’ links to cholera, the language employed was not very different from what TV anchors and WhatsApp propagandists in India use today when they want to indict specific people or communities. Here is an American medical professional writing in 1892:

It is beyond human possibility to put India in good sanitary condition in any reasonable time, and to make the pilgrims observe the commonest rules of hygiene and cleanliness would require two soldiers for each pilgrim. The most riotous imagination could scarcely exaggerate the filth of India and Egypt and of the Hindoo and Mohammedan pilgrims… So long as the pilgrimages continue, Europe and this country will be endangered.

The obsession here to denounce Indians as a danger to the ‘civilised’ West seems to match the obsession of the government and some journalists today to frame the Nizamuddin event as the main driver of COVID-19 in the whole country.

In the late 1890s, religion was among the major factors blamed for the spread of plague in India. Many Indians hid plague patients at home and refused to cooperate with authorities out of anger against the anti-plague measures that clashed with their religious and cultural beliefs. These included such actions as soldiers entering people’s houses at will to look for plague patients and then defiling sacred kitchens and temple areas with their boots; physical examination of women for signs of the plague; and autopsies on bodies of plague victims without the consent of relatives.

Though the British administration was not new for Indians in the 1890s, many British medical ideas were still considered alien and even irreligious. The majority of Indians still looked at ‘Western medicine’ with suspicion and mistrust.

In a fascinating book on British public health policies, historian David Arnold describes how during stressful times like epidemics, the mistrust often metamorphosed into extraordinary rumours. Among these were rumours about covert dissection of Indian bodies – anathema to the religious beliefs of Hindus and Muslims alike – were very common. In October 1896, the infectious diseases hospital at Arthur Road in Bombay (today the Kasturba Hospital) was mobbed by hundreds of mill workers when a local woman was forcibly taken there. The workers believed that “there was ‘something diabolical” about a hospital ‘which claimed so many victims.’ Patients, it was said, were “bled to death through the soles of their feet”. (The recent attack on doctors in Indore also displays a similar pattern of general mistrust in the establishment, circulation of rumours, and high-handed official actions.) 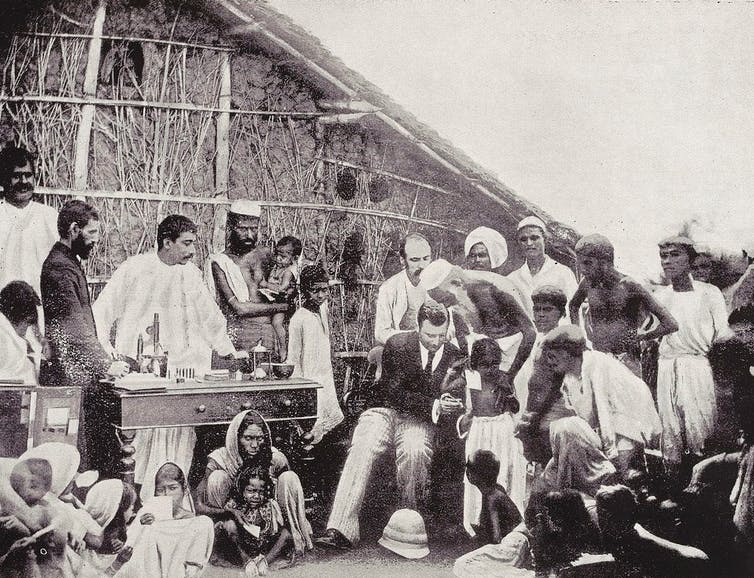 Such fierce opposition from Indians forced British officials to ameliorate their attitudes and reach out to community leaders for help in anti-plague measures and messaging – although in the colonial setup, this was more a strategy to avoid further popular discontent and less out of genuine respect for public participation.

Similar concessions were also made around cholera in the previous decades. Historians Biswamoy Pati and Ujaan Ghosh have written about how for a short while, the British toyed with the idea of banning the Puri Jagannath pilgrimage altogether as it was considered one of the biggest sources of cholera in India (and hence its spread into the West). But the idea was soon abandoned. Officer W.W. Hunter described these developments in an 1872 volume thus:

In 1867 a last effort was made to enlist the educated classes against so homicidal a practice… The Viceroy, while disclaiming any wish to interfere with the religious feelings of the people, urged them to consider the ‘exposure, disease, and death,’ which pilgrimage to Jagannath entails. But the answers which came in from every part of Bengal admitted of no hope. [Eventually] All that remained was to institute a system of sanitary surveillance and quarantine, which should reduce the inevitable loss of life to a minimum.

This pattern of initial knee-jerk reactions and top-down imposition later followed by negotiations and concessions seems sadly to be a consistent feature of state response to epidemics in India. Social sciences research shows that it is impossible to mount an efficient public health response when the public does not trust the responders. What might work better is making communities and their leaders – including religious leaders – a major part of public health discussions and decisions right since the beginning. At the same time, stigmatisation and scapegoating need actively to be avoided. As British official Antony MacDonnell argued in 1898, success in plague control could be attained only by “working through the people” themselves.

Also read: Coronavirus and Anti-Asian Racism: How the Language of Disease Produces Hate and Violence

During the recent Ebola epidemic in western Africa, health workers faced similar challenges. Local communities felt their religious and cultural practices were under threat when it was found that some of their rituals increased the chances of viral infection. Rumours too were common, like ones that claimed that Ebola treatment centres were used for the extraction and trafficking of human organs. In a 2015 speech, the then World Health Organisation chief Margaret Chan discussed some lessons that could be learnt from the Ebola experience. One of the biggest lessons, she said, was that “the outbreak will never be brought to an end in the absence of full community engagement and cooperation.”

With respect to COVID-19, so far, almost the entire approach of the Centre and many state governments has been high-handed and top-down. History clearly shows that such approaches are ineffective and damaging, and that success in epidemic emergencies is possible only through trust and constructive engagement between the public and the state. Stigmatisation and scapegoating might help reap political dividends, but that comes with an enormous public health cost.