Watch: 'India Could Be Next Coronavirus Hotspot, in Worst Case up to 60% Could Be Infected'

Dr Ramanan Laxminarayan, director of the Washington-based Center for Disease Dynamics, Economics and Policy, says India needs to sharply ramp up its testing. 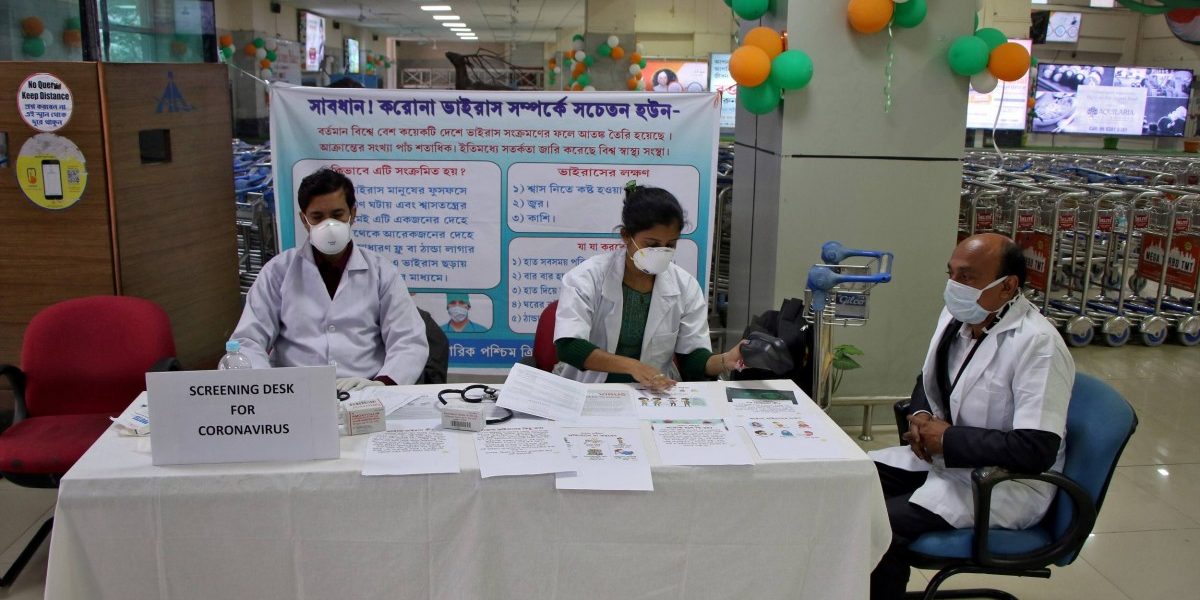 A health desk is set up to screen travellers for signs of the coronavirus at Maharaja Bir Bikram Airport in Agartala, India, January 31, 2020. Photo: Reuters/Jayanta Dey/File Photo

New Delhi: In an interview that could cause considerable apprehension and even possibly fear, the director of the Washington-based Center for Disease Dynamics, Economics and Policy and lecturer at Princeton University Ramanan Laxminarayan has said that India could be the next coronavirus hotspot.

Using the United States estimates for itself that 20%-60% of the population could be infected, Dr Laxminarayan said that means in the worst case scenario, 60% of the Indian population could be infected – which is some 700 or 800 million people. However, Dr Laxminarayan added that the vast majority would only be mildly affected. A very small percentage would become seriously ill and an even smaller percentage would, sadly, lose their lives.

In an exclusive 50-minute interview to The Wire, Dr Laxminarayan said that he found it hard to believe the Union health ministry’s official figure which, on their website at 12 pm on Wednesday, said that India had 130 people with the coronavirus infection in addition to the 14 who have recovered and the three who have died.

He says if the United Kingdom can accept that they have underestimated the number infected by a factor of 12, at the very least the situation would be the same in India. That means there are over 1,500 undetected cases. In fact, given our size and population density Dr Laxminarayan estimates that India is bound to have 10,000 or more undetected coronavirus cases.

Dr Laxminarayan also told The Wire that he disagrees with the Indian Council of Medical Research’s official stand that India is still in stage 2 of the epidemic and has not entered stage 3. Dr Laxminarayan said India probably entered stage 3 two or three weeks ago. He said he was saying this on the basis of the experience of the rest of the world and on the best scientific modelling projections. He also said that if you look at the steps that the government has taken – shutting schools, colleges, theatres and cinemas – this clearly suggests the government knows we are in stage 3 even if, for arguably good reasons, it does not want to publicly admit it.

Dr Laxminarayan told The Wire that India needs to sharply ramp up its testing. He said we should be testing 10,000 people a day. Instead, according to the ICMR, as of 5 pm on March 17 India has only tested a total of 11,500 people.

While Dr Laxminarayan agreed with the ICMR policy not to test asymptomatic people who have either come from coronavirus-affected countries or been in touch with coronavirus-infected people, he felt it was essential to test those who have symptoms such as coughs, cold, fever or respiratory distress even though they have no travel history or have not come in contact with an infected person. This second category must be tested otherwise we will not know what percentage of people with such symptoms are coronavirus-related as opposed to sufferers of ordinary seasonal colds, coughs and flu.

Asked by The Wire for his assessment of the Indian government’s handling of the coronavirus crisis, Dr Laxminarayan said that whilst it had acted promptly to check entry into the country and while sensible steps like shutting schools, colleges, theatres and cinemas had been taken he was critical of the level of testing which he felt was woefully inadequate for a country with a 1.3 billion population. Dr Laxminarayan told The Wire that on the assumption somewhere between four and eight million people could need ICU treatment, India needs to urgently import ICU equipment, ventilators and a range of medicines. He said this has been right at the top of the advice he has given the government.

In part two of the interview (after the commercial break) Dr Laxminarayan spoke about the sensible measures ordinary people must take to protect themselves. He said if you have a cold or cough or fever or respiratory distress, you should immediately stay at home for at least a week. If after about four days the symptoms persist, you should get yourself tested. However, there is no need to rush for immediate testing.

Dr Laxminarayan said if people are quarantined at home, the rest of the family needs to take commonsensical precautions but this does not mean that they cannot enter the room to serve food. They can actually hand the tray over rather than leave it two feet away. He said you can wash the dishes used by such a person or their clothes and there is no need to wear gloves. Simply wash your hands thoroughly and frequently. He said four or five times a day was sufficient.

Dr Laxminarayan said there was absolutely no need to wear masks and advised people against doing so. He said unnecessarily worn masks reduced the number available for medical and healthcare staff who need them. The rest of us, who are not infected, do not need to wear them.

The above is a paraphrased precis of Dr Laxminarayan’s interview to The Wire. There’s a lot more in the full interview.