Against an average 50 to 60 cremations on normal days, Surat is now seeing a staggering 300 bodies a day and some 100 of them need to be cremated according to COVID-19 guidelines. Ambulances, carrying bodies of people who died of COVID-19, parked outside the Jahagirpura Crematorium for their last rites, as coronavirus cases surge countrywide, in Surat, Wednesday, April 14, 2021. Photo: PTI

Surat: Less than a week ago, the doctors treating 55-year-old Lalit Jariwala for COVID-19 at home advised him hospitalisation after his oxygen levels dropped drastically.

Little did the Jariwalas who live in Surat’s Mahidharpura area realise that it was not going to be as simple as calling an ambulance and moving him to a hospital.

His son, 26-year-old Dharmesh (name changed to protect identity) set about searching for a hospital and joined a veritable queue at half a dozen facilities, which were all running short of beds. It took over 36 hours before Jariwala could be admitted to a private hospital. His son, who requested anonymity lest the hospital management take offence, said, “Our woes weren’t over with a hospital bed. In fact, they had just started.”

They had to first search for a ventilator though they were willing to shell out any amount of money for it. Finally, they organised one. The next challenge was arranging for remdesivir injections and then, plasma. “We are not the only ones, we realised, once here, that patients’ relatives had to organise everything,” Dharmesh said.

The Agrawal family are textile traders who live in Surat’s plush Vesu area. They had to plead with hospitals to somehow spare a bed for Meena Agrawal. “I requested this private hospital to charge any amount of money, but to admit my wife, who was critical. We could somehow admit her in another hospital by paying a premium,” her husband Akash Agrawal said. Vehicles move on overbridge during night curfew, imposed by the authorities due to a surge in coronavirus cases, in Surat, Friday, April 09, 2021. Photo: PTI

The Jariwalas and the Agrawals are only two instances of hundreds in Surat. Many others have faced worse. And Surat is no exception – though it may look worse – there are similar stories in Ahmedabad, Vadodara and Rajkot, all major cities in Gujarat where there is an evening-to-morning curfew in place.

In Surat, there are queues not only at the 110 COVID-19 designated hospitals but also at the crematoria where they have taken to issuing waiting tokens because of the rush.

Though the city’s three main crematoria have been cremating an average of 300 bodies every day, the waiting time could stretch anywhere from six to 10 hours. Out of these 300, an estimated 100 to 120 bodies are being cremated according to COVID-19 guidelines. The Ashwini Kumar crematorium has been cremating over 125 bodies a day, Kurukshetra crematorium at Jahangirpura cremates around 100 bodies and the number for the Ramnath Ghela crematorium at Umra is an average of 90.

A trustee at one of the three crematoria said, “Out of the 100 or so bodies that we have been cremating for the last 10 days, at least 30 of them require adherence to COVID-19 guidelines.” So great is the rush that bodies from Surat are also being taken to the nearby towns of Bardoli and Navsari for cremation. 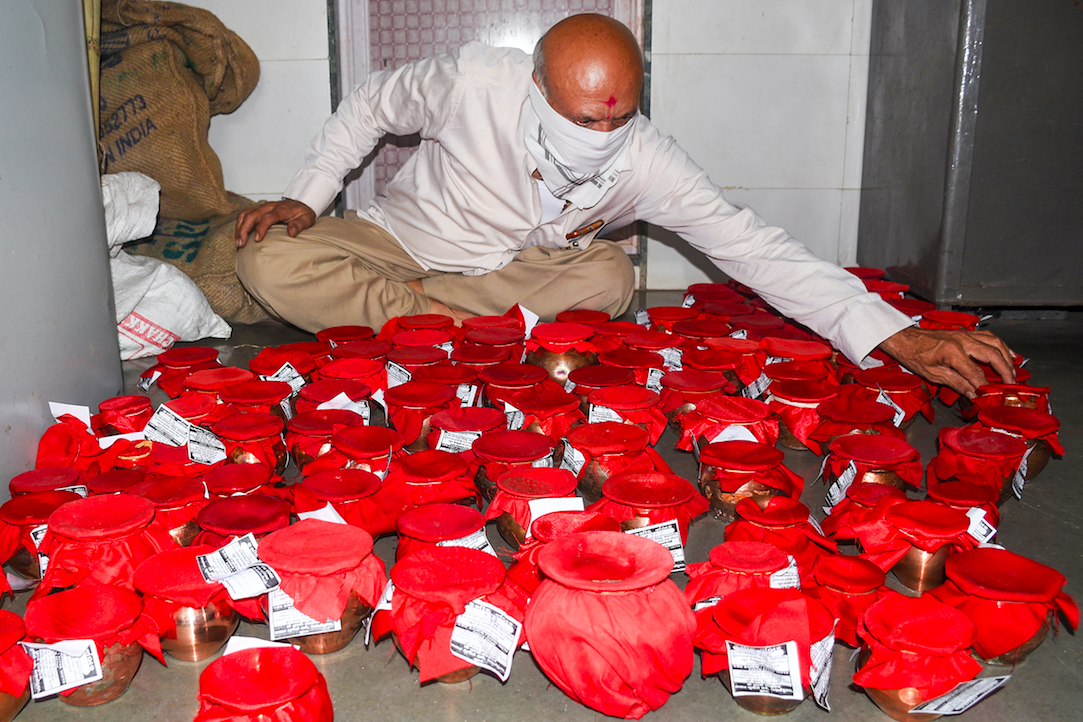 A volunteer packs urns containing ashes after final rites of those who died of COVID-19, to be taken to Haridwar, in Surat, Wednesday, April 14, 2021. Photo: PTI

To ease the burden on crematoria, the Surat administration has reopened a cremation ground in Pal-Bhattha area that was closed 15 years ago. It can handle an average of 30 to 40 bodies everyday. Another makeshift crematorium has been set up at the Varachha area with a facility of 20 pyres.

In sharp contrast to the rush at crematoria, official death numbers in Surat in the last 15 days since March 31 has ranged from a minimum of four to a maximum 22, which is the highest reported during the last 24 hours as on 5 pm on April 13.

Official sources confirmed that there are orders not to include patients with co-morbidities among COVID-19 deaths. Asserts Surat-based Dr Chandresh Jardosh, the outgoing president of Gujarat chapter of the Indian Medical Association, “This is not a new trend. Playing down the numbers has been happening since last year, just to prove that the lockdown was successful.”

“They are deliberately not including patients with co-morbidities among the coronavirus deaths. This is ridiculous. A person may be carrying diabetes for 15 years and now you say he died of diabetes! The fact is that the situation is serious, not only in Surat but across Gujarat and even the country,” he said. When contacted, Surat Municipal Commissioner Banchhanidhi Pani said, “There is a death audit committee of expert doctors, who are in charge of classification of the cause of death. At SMC, we ensure that patients are taken care of, tested and vaccinated.”

As for the high number, he said, “Deaths of patients who may have been admitted to hospitals in Surat from other cities and from neighbouring Maharashtra can’t be considered as Surat deaths.”

According to the managers of all three major crematoria, because of overuse, the frames of the gas furnaces have melted and the burners have got clogged. In fact, two gas furnaces at the Ashwini Kumar crematorium developed snags and stopped functioning, and needed to be urgently repaired.