On April 26, a one-member bench led by Justice Najmi Wajiri intervened and slashed the price by 33% for each kit. 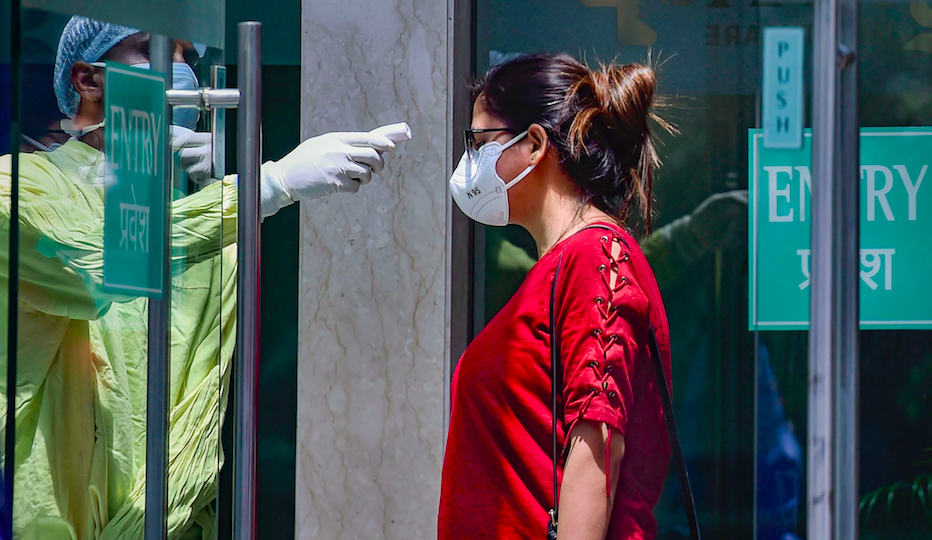 A health worker checks the temperature of a person on New Delhi. Photo: PTI

New Delhi: A dispute between a distributor and importer of the COVID-19 rapid test kits from China in the Delhi high court has brought to light the fact that the Indian Council of Medical Research (ICMR) has been sold the equipment at a hugely overpriced rate.

The high court has noted a 145% mark-up between the landing price of the kits from China to their supply to the ICMR. On April 26, a one-member bench led by Justice Najmi Wajiri intervened and slashed the price by 33% for each kit.

According to a news report in Business Today, the importer, Matrix Labs, was procuring the SARS-CoV-2 test kits from Wondfo Biotech, a Chinese firm, at a price of Rs 245 per piece. This included air freight price of Rs 20 each.

However, Matrix Labs has been selling each kit to the distributor, Rare Metabolics Life Sciences, at Rs 400. The distributor, in turn, is selling the kits to ICMR for Rs 600 each before adding the Goods and Services Tax (GST). This means that there is a 145% mark up between the landed price of the kits and the rate at which they were sold to ICMR.

On March 27, ICMR had placed an order for five lakh such kits at the said price. Out of the order, 2.76 lakh kits have already been delivered to ICMR while the remaining ones are yet to land in India.

Through yet another distributor, Shan Biotech and Diagnostic’s, Matrix Labs has been providing another batch of 50,000 such kits to the Tamil Nadu government. Of this, the news report said 24,000 have already been delivered.

The distributor, Rare Metabolics, went to court because Matrix Labs demanded that the entire payment be made upfront to it as per prior understanding before it handed over the remaining 2.24 lakh kits to it.

According to the Business Today report, Rare Metabolics has already paid Rs. 12.25 crore of the Rs 20 crore (plus GST) due to Matrix Labs. The distributor petitioned the court seeking an order to Matrix Labs to release the remaining kits without paying the entire amount as it is yet to receive the full amount from ICMR. “The petitioner informed the court that the consignment of 2.67 lakh rapid antibody tests has already been supplied to the ICMR for which payment is still awaited”, the report said.

The payment would be made after the kits met the ICMR’s standard.

Importantly, ICMR put the rapid tests on hold on April 25 after detecting ‘faulty’ results from the kits shipped from Wondo. The Chinese firm has reportedly denied they were faulty.

On April 26, the Delhi high court, upon hearing the petition, not only directed Matrix Labs to release the remaining kits as soon as they land in India and await ICMR’s payment to Rare Metabolics to receive the money due to it, but also intervened to lower the price to Rs 400 per kit as “public interest must outweigh private gain”.

“The court is of the view that a profit mark-up of Rs. 155 i.e. 61% on the landed cost price of Rs 245, is much on the higher side and in any case more than sufficient for the seller, for the kits/tests to be made available in India for urgent extensive tests through the country. Especially in these present extraordinary circumstances of the worldwide pandemic,” Justice Najmi Waziri highlighted.

“Public interest must outweigh private gain. The lis between the parties should give way to to the larger public good. In view of the above, the kits/tests should be sold at a price not beyond Rs 400 per kit/tests inclusive of GST,” the order reportedly said.

The new report said both the parties have agreed to supply the kits at the rate set by the court. The court has directed the distributor to pay the remaining Rs 8.25 crore to Matrix labs within 24 hours of receiving the amount from ICMR.

The high court has also asked Matrix Labs to release the remaining kits to the Tamil Nadu government.

Also read: No COVID-19 Test Is 100% Right, so Their Errors and Results Are Both Important

Meanwhile, reacting to the news, opposition Congress has accused the central government of allowing “hoarding” and profiteering on the kits during the time of a crisis. In a statement, Congress leader Manish Tiwari stated that while Matrix Labs had sold the labs at Rs 400 each to Tamil Nadu, it did to ICMR at Rs 600 each.

According to another Business Today report, Tiwari has been quoted as having said, “The distributor supplied these rapid testing kits to ICMR for Rs 30 crore, further earning Rs 9-crore profit. He (Tiwari) said these private companies earned Rs 18 crore, over 100% profit, on the supply of just 5 lakh test kits. The same company, Matrix, had sold the same testing kits to Tamil Nadu for Rs 400 each,” he said.

On April 27, a day after the court order, Prime Minister Narendra Modi reportedly held a meeting with the ICMR chief Balaram Bhargava following which all kit procurement orders from China were cancelled and a decision was taken to withdraw them from use.

“The kits will be withdrawn and the orders will be cancelled,” a senior official told the Economic Times on condition of anonymity.

The antibody kits were dispatched to several states by ICMR.