To ensure continued usage of toilets, simply constructing them is not enough. Sustained community engagement is necessary to create awareness and change old habits.

The group of women who have been trained in repairing hand-pumps. Credit: D.V.L. Padma Priya 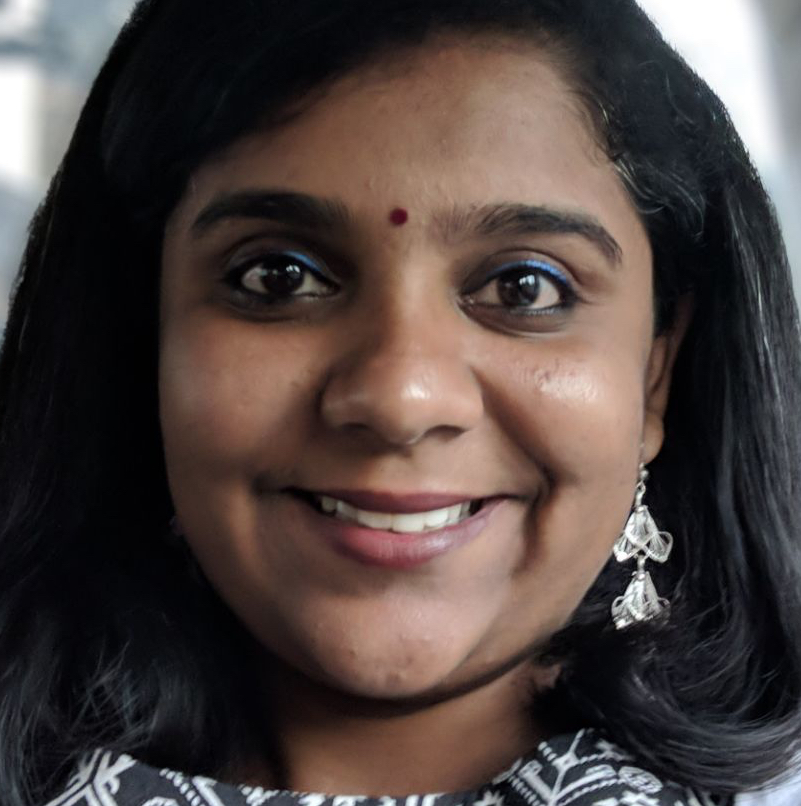 Unnao district, UP: Tucked away behind swathes of sugarcane and wheat fields, Patkapur is a small village in Sikandarpur Sarausi block of Uttar Pradesh’s Unnao district. It is working its way towards gaining Open Defecation Free (ODF) status and ensuring all households have clean drinking water.

While the push for ODF status is a fairly recent one, it has taken years of concerted efforts from NGOs and communities to even think of achieving it.

Most of the 100 households in Patkapur are dependent on farm income. As recently as 2014, the village did not have many toilets. “We knew toilets are important but didn’t want to bring impurity into our homes, so we didn’t ask for it. We would defecate near the farms early in the morning,” said Radha, a woman this reporter met.

“CLTS did not just help us educate but also mobilise villagers’ demand for toilets, better sanitation and drinking water facilities. We did this by showing them how as long as open defecation continued, they would always be at risk of disease”, said Johnson A., program manager of World Vision India.

The technique helps shift the focus just acquiring the sanitation hardware to creation of open-defecation free villages. The onus of ensuring that all families have household toilets rests with the community. It integrates hygiene and health, keeping the community’s ownership sustained.

“They used rangoli (colored powder) to draw a map of our village to explain how the faeces gets into our water sources, contaminating it. It took a while, but we were eventually convinced that our homes wouldn’t become impure with toilets. Rather, not having one would make the village dirty and impure,” said Radha. 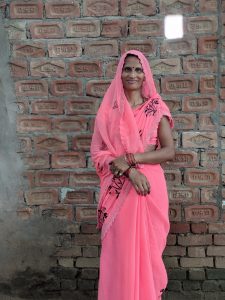 Rekha, a resident of Patkapur.

So far, the organisation has covered 52 villages in Unnao district and 236 villages across UP. It has used various methods such as street plays to raise awareness. While the UP government has claimed to have achieved 99% ODF status across the state, that is far from the truth in Unnao. Just in Sikandarpur Sarausi block, over 5,000 toilets need to be built.

The block’s additional development officer Vinod Verma claims that the administration was not provided all the funds it was promised. “In the second phase, we will push for construction of toilets in schools and anganwadis. Once that is done, we will focus on solid and liquid waste management and providing drinking water facilities where there are none,” he said.

He said that 12,666 toilets were constructed in the block as of September 1, 2018. “This covers 55 villages. About 20 villages have achieved 100% sanitation coverage, of which 9 have been declared ODF by a Central government team,” Verma claims.

On October 2, Uttar Pradesh government declared it had achieved 99.8% ODF status, a claim those on the ground say is impossible to independently verify.

While there has been a significant improvement in the use of basic and safely managed sanitation facilities in the district, many believe complete elimination of open defecation remains a challenge. Johnson says, “We successfully provided functional latrines to 26 villages and ensured that people stop releasing faeces into water and open area. But sustaining ODF status is challenging due to geophysical, socio-cultural and economic factors.”

Verma concurs with this viewpoint and says that the biggest challenge is that of community ownership and changing people’s habits. “In the villages, you will see pucca houses that have storage space for hay, grains and also space for cattle. But villagers hesitate to invest in toilets as they believe it makes their houses impure. So, even if toilets are built after a lot of persuasion, they are not used,” he says, adding that behaviour change remains the key to success. “Once there is behaviour change and people are habituated to using toilets, there is no looking back.”

Ensuring demand for usage of toilets 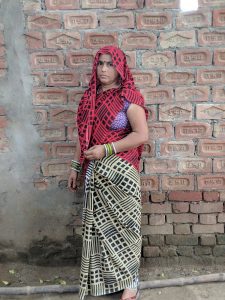 Farukkh Khan, regional manager (north), Water Aid India, agrees that consistent community engagement and mobilisation is key to ensure not just a demand for toilets but also for its use. “In our experience, it is important to have continued and sustained engagement with the community using multiple strategies. A consistent engagement with ‘Nigrani committees’ was lacking. This is where we chip in,” he says.

In Fatehpur, key behaviour changes had been observed for each household in a village on a map and this is being consistently tracked and followed up, he said. “Those families showing poor hygiene behaviour are specially focused, using interpersonal communication and group discussions strategies to improve,” he says.

Villagers, however, feel differently. They attribute not just habit, but also poor quality of toilets for the low-usage. “In some villages, not every household has a toilet. The tanks fill up quickly too. Others don’t have roofs and we have monkeys jumping around. Then isn’t it better and safer to defecate near the fields?” asks Ramnaresh.

Close to half the toilets studied followed the twin leach pit design, which is the best and sustainable onsite sanitation technology for most rural geographies if built correctly. Some of the specific geographies require different sub-structures too.

However many of the observed toilets had gaps from a technological point of view: appropriate distance between pits, proper construction of pits, safe distance from water points, appropriateness for the specific geography and for the water table.  While the twin leach pits created option for pits to be emptied safely once filled, there were concerns about emptying other toilet pits or tanks as well, the study found.

“For making the toilets and their use sustainable, we need to pay attention to these aspects. The Swachh Bharat Mission leadership paid attention to the issues pointed out by the study and strengthened its communication on technology aspects. How this helped improvement of sanitation technologies in toilets constructed afterwards is to be seen,” added Raman.

Another factor contributing to the contamination of water in Patkapur is the booming leather industry. Many independent lab tests have revealed high levels of mercury, arsenic and fluoride in the water.

“For years, we consumed water which was red in color and smelly. We just assumed we had no choice,” said Pushpa. “If we had guests coming over, we would get water from a neighbour who had a borewell,” she added. For occassions such as weddings, men of the village would get clean drinking water from neighbouring villages.

Traditionally, villagers used hand-pumps called tullu which couldn’t go beyond a depth of 40 feet. “During our first visits to the village, we showed them the water in our bottles and the water from their hand-pumps. Only then did they realise the stark difference,” adds Johnson.

The government finally installed India Mark III hand-pumps, after which the residents were able to obtain less contaminated water to drink and cook with. With a robust conventional lever action, the India Mark hand-pump can lift water from 50 m (over 150 feet). “We noticed that we weren’t falling sick and finally the dal (pulses) would cook too,” said Rekha. 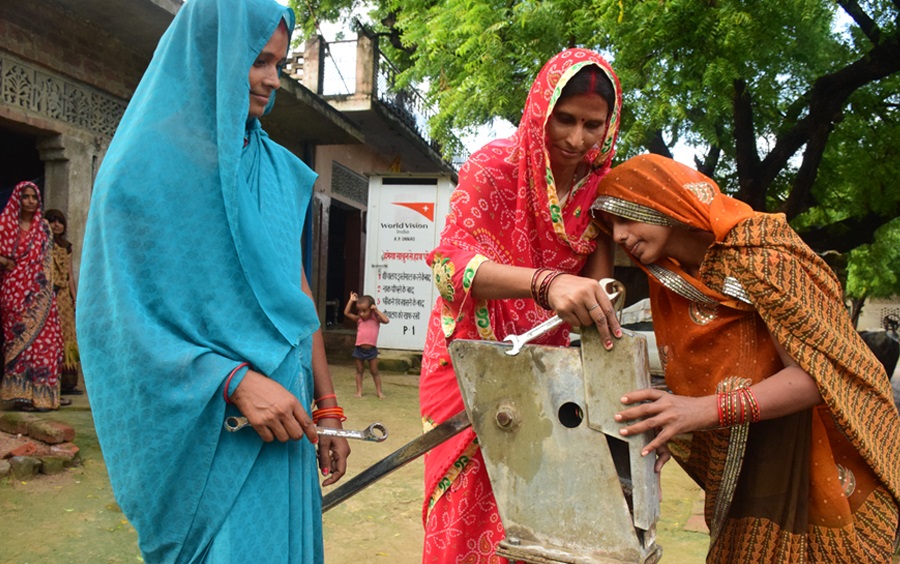 However, the government seems to have neglected the maintenance required for the pumps. “Each time there was a problem with the hand-pump, we had to inform the village pradhaan, who would then have to call someone to repair it, which could take several days. During the wait, we had get water using tullu,” said Radha, a housewife.

In 2017, Rekha was among 64 women from different villages in Unnao who attended a practical training programme conducted by World Vision India along with Sarathi Development Foundation on water security. They were trained on basics of hand pump repairing, maintenance and also practical water testing.

For these women, it was a step not just towards continuity in terms of potable water, but also in breaking the shackles of their gender. “Our husbands were not keen on us attending the training, but we insisted. However, after returning, we were not able to put the training to practice.We were either busy with daily chores or couldn’t leave the house,” recalls Pushpa.

In due course of time, though, the need to maintain the water sources necessitated that the women implement the training. “We learnt how to change wiring and open bolts. Finally, the men were convinced that since it is the women who use water the most, we should be allowed to repair,” she adds.

This has not only solved the problem, but has also empowered the women. “We like going out together and being able to do this on our own without the help of men. Chain repair takes one hour; wiring for hand-pump takes more. We repair the pumps in out village, but that’s alright. Our world is this village,” said Radha.

For now, the women don’t charge for repairing bore wells, but hope to do so in the near future to make it a viable livelihood option.

All photos by D.V.L. Padma Priya.