An Inadequate and Misdirected Health Budget

The Budget allocation for the health sector is not even one-third of the target laid out in the draft National Health Policy. 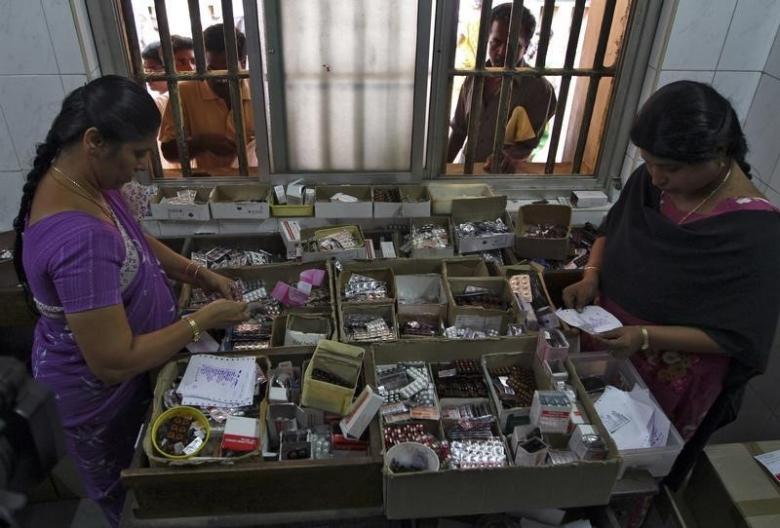 The draft National Health Policy (NHP) 2015, based on the core principles of equity, universality and affordability, had set three major objectives for the public health sector: expanding preventive, promotive, curative, palliative and rehabilitative services to improve population health status; assuring universal availability of free, comprehensive primary healthcare services; and significantly reducing out-of-pocket expenditure by ensuring affordable secondary and tertiary care services. These booming ambitions, though, were promptly toned down, “taking into account the financial capacity of the country” as it set minimalist fiscal targets for itself: public health expenditure of 2.5% of GDP, 40% of which – i.e. 1% of GDP – would come from the central expenditures.

This year’s central health Budget at 0.29% of GDP – which is marginally better than previous years’ level of 0.26% – is not even one-third of that target. At constant prices, adjusting for inflation (using GDP deflators), this year’s total allocations have increased by 18% over previous years’ expenditures. This appears to be noticeable only because growth of public expenditure on health in the past few years has been marginal. Compared to an expenditure of Rs 26,567 crore in 2013-14 – a year preceding the election of the current government – an allocation of Rs 37,471 crore for 2017-18 (both years’ values at 2011-12 constant prices) represents an annual increase by only 9% (compound annual growth rate or CAGR). Growth of per-capita expenditures for the same period is 7.7% (calculation using UN Population Division estimates). 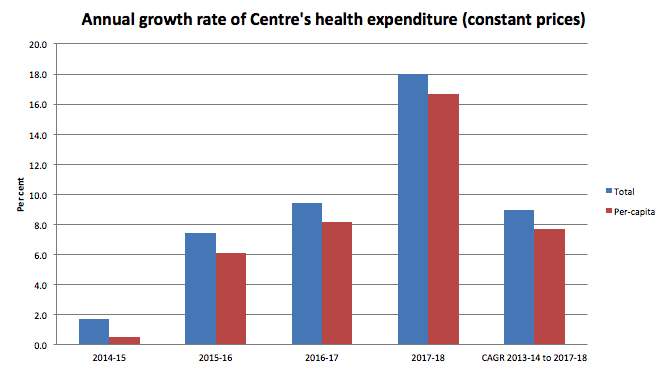 The modest increase by 18% (at constant prices) in total allocation is largely concentrated in tertiary and secondary care sectors. More than one-fourth of this increase (at constant prices) is allocated to upgrade district hospitals into new medical colleges under National Health Mission. Another 26% of the increase in total allocation is on the Pradhan Mantri Swasthya Suraksha Yojana, which is for setting up new AIIMS and upgrading medical colleges.

On the other hand, this Budget completely marginalises primary care and public health. Over the past years, the National Rural Health Mission (NRHM) has been badly neglected, with its share in this year’s central health Budget coming down to 43% (Budget estimates) from 53% (actual) in 2015-16. Within the NRHM, there is an increase of allocation by Rs 2,000 crore (constant 2011-12 prices) under ‘health system strengthening’, which largely will go into transforming 1.5 lakh health sub-centres into ‘health and wellness centres’.

This modest increase in health system strengthening is almost matched by a reduced allocation in reproductive and child health (including immunisation), communicable diseases and maintenance of existing infrastructure. This means that existing public health and primary care facilities, particularly the primary health centres (PHCs) and community health centres (CHCs), will further underperform and lag behind the rural population’s health needs due to a shortage of funds. These rearrangements of sub-heads without any overhaul of allocations to build new infrastructure means the shortfall of 33,000 health sub-centres, along with 22% and 32% shortage of PHCs and CHCs, will still persist. On the whole, a marginal increase in this year’s Budget allocation for NRHM by 4.4% (2011-12 constant prices) over last year’s expenditures (revised estimates) is a death knell for the dying rural public healthcare sector.

The NRHM’s urban counterpart, the National Urban Health Mission (NUHM), is yet to start properly. For the period 2012-13 to 2016-17, its average yearly budgetary requirement was estimated to be Rs 3,391 crore per year from central funds; this year’s allocation is only Rs 752 crore.

Strengthening and deepening a subsidised public healthcare system is a much cheaper option to ensure universal access to healthcare, rather than subsidising private providers via insurances. Yet, the poor perhaps had hoped for a modest health protection following last year’s Independence Day promise by the prime minister about Rs 1 lakh insurance coverage for every BPL family under a redesigned RSBY – now the National Health Protection Scheme (NHPS). The finance minister’s Budget speech, though made no mention of this.

This year’s allocation to RSBY/NHPS, though increasing marginally from last year’s expenditures (revised estimates), has declined compared to last year’s budgeted amount by Rs 500 crore (nominal terms). Upscaling the RSBY to NHPS in the proposed manner was estimated to cost Rs 24,000 crore for five years or on average of Rs 4,800 per year. Allocating Rs 4,800 for NHPS alone would have required more than a 12% increase (in nominal terms) in allocation from last year’s expenditures. With an obvious resource crunch (along with reducing fiscal deficit by 0.3% of GDP), like the implementation of NRHM, implementation of  NHPS in the proposed form would have meant even lesser allocation in other sub-sectors of this pretty meagre health Budget which the government could not have afforded in a crucial election year.

Outlay on Integrated Child Development Services (ICDS) and other components of child welfare taken together (from here on, termed together as umbrella child welfare or UCW) increased from last year’s expenditures at constant prices. This was primarily due to upscaling the Indira Gandhi Matritva Sahyog Yojana (providing Rs 6,000 to women undergoing an institutional delivery and vaccinating their children) from pilot districts all over the country. This is a welcome and much awaited move (in spite of some of its flaws), though the quantum of provision (Rs 6,000), which was originally laid down in the National Food Security Act in 2013, should have been increased. On the other hand, allocation in core ICDS (anganwadi services) at constant prices barely increased from last year’s expenditures and the overall trend from 2013-14 till this year shows a yearly decline by 5%.

A damning Niti Ayog Report of 2015, based on a rapid survey, showed that around 41% of anganwadis have inadequate space, 71% are not visited by doctors, 31% have no nutritional supplementation for malnourished children and 52% have bad hygienic conditions. Given this abysmal state, setting up of mahila shakti Kendras in 14 lakh anganwadi centres – as highlighted by the finance minister – with a measly allocation of Rs 500 crore (Rs 3,600 per anganwadi for a year) is a mere eye wash. ICDS anganwadi service today requires a comprehensive overhaul with substantial increase in outlay.

In comparison, food subsidy and MNREGA appear to be in a slightly better position, with a minor annual increase in expenditure (at constant prices) between 2013-14 and 2017-18 by 8.5% and 6.3% (CAGR). However, at constant prices, this year’s allocation in MNREGA has declined from last year’s expenditures while food subsidy, which is marginally higher than last year, has declined from expenditures of 2015-16. Health and nutritional status heavily depend upon these allied sectors and their continued neglect is a concern. 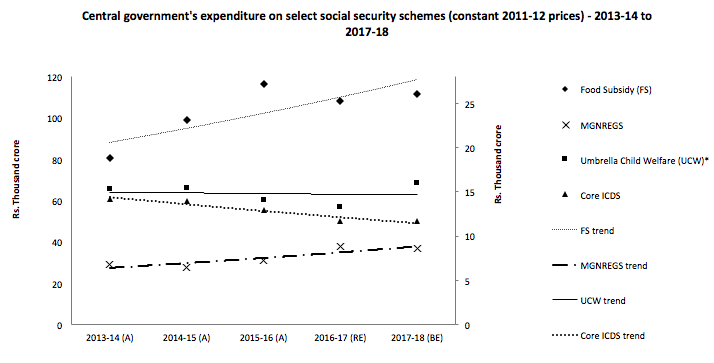 This year’s Budget thus continues with the policy of promoting high-end medical care services while ignoring primary care sector and other broader non-medical inputs of health. These sectors are crucial in improving the performance of health systems, which the NHP 2015 aims for. The long standing promise of ‘universal, free, comprehensive primary healthcare services’, which even the draft NHP 2015 reiterates, still goes unattended while the institutional and human resources priorities respond to the demands of a growing medical market.

Upgrading district hospitals into medical colleges might go a long way in creating additional 5,000 post graduate seats per year as highlighted by the finance minister’s Budget speech, but it still may not accomplish the objective of filling the shortage of specialist doctors in public institutions. Proliferation of a largely unregulated private health sector, with its profits unchecked in absence of a robust public sector, will still attract more doctors, particularly when public sector posts are becoming contractual.

While there is indeed a need to expand public hospitals, it cannot be made at the cost of the primary sector. The poor incur huge out-of-pocket expenditure not only for illnesses that require hospital services, but also due to the unavailability of free primary care. Some even fall sick in the first place due to poor nutrition, particularly children and pregnant women. The public secondary and tertiary care hospitals are clogged up with cases that are preventable at anganwadi centres or treatable at a primary level. A lopsided expansion of high-end hospitals and only some upgradation of existing district hospitals without paying heed to the problems of public health and primary care sector, and no real expansion of first-referral care at the CHCs will only perpetuate this problem. The tragedy is that due to such misallocation of resources, these paltry increases in allocation in public healthcare will not yield any visible benefit to a large section of the population.

Sourindra Mohan Ghosh is PhD scholar at the Centre for Economic Studies and Planning, Jawaharlal Nehru University, New Delhi and a consultant at the Council for Social Development. Imrana Qadeer is retired professor at the department of social medicine and community health, Jawaharlal Nehru University and distinguished professor at the Council for Social Development, New Delhi.