Hundreds Who Died After COVID-19 Infection Not Included in Gujarat Tally: Report

A report in Dainik Bhaskar said that of the 500 bodies that had been brought to civil hospitals since March 2020, only 10 were tested for COVID-19. 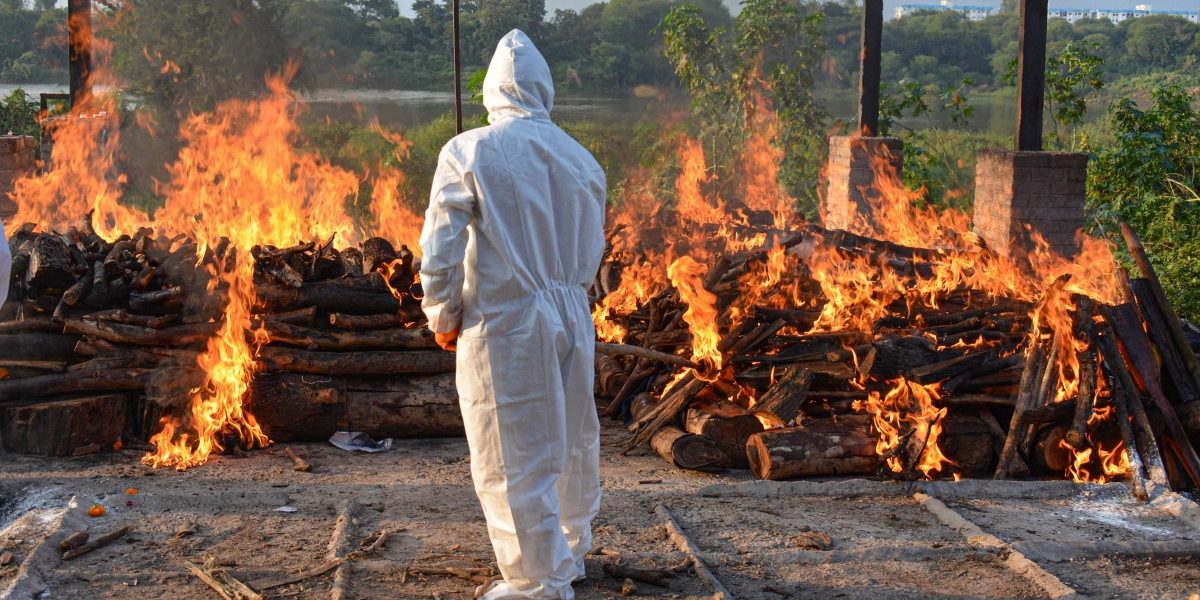 A municipal worker wearing protective suit cremates the body of a COVID-19 victim, at a crematorium in Karad, September 4, 2020. Photo: PTI

New Delhi: Hundreds of persons in Gujarat who died after getting infected by COVID-19 have not been included in the state’s official mortality figures, according to a report by Dainik Bhaskar.

The last rites of these deceased persons, who neither visited any hospital nor received any treatment, were performed in accordance with the protocol established for those who have died of COVID-19. Only 5% of the dead bodies – only those who had shown symptoms of coronavirus – were tested for COVID-19.

The report also said that since March 2020, 500 bodies had been brought to civilian hospitals. Of these only 10 had been tested for COVID-19, even though 200 had displayed symptoms. Of those tested, three were found to be positive – i.e. every third person among those who had been suspected.

The Dainik Bhaskar report also said that while COVID-19 had been noted as the cause of death in the last rites of three bodies which had tested positive, the Surat Municipal Corporation didn’t count the death of Dr Mohanbhai Babubhai Gamit. A rapid test was conducted on Gamit’s body a day after he died, on December 5, since he had worked in the COVID-19 ward at the Surat Municipal Institute of Medical Education & Research (SMIMER) hospital. The test was found to be positive and his death certificate identified COVID-19 as the cause of death.

The report also said that if all 200 bodies that displayed symptoms of COVID-19 been tested, perhaps as many as 60 positive cases would have emerged. If all 500 bodies had been examined, the figure could have been higher.

Also read: How and Why the Gujarat Government Is Hiding the State’s COVID-19 Death Toll

“A rapid test of 10 corpses with corona symptoms was performed at the civil hospital. There were about 190 dead bodies which were not tested and open post-mortems were done for them,” the report said.

Dr Gaurang Patel, associate professor of Forensic Medicine at JMERS Medical College and Civil Hospital, Ahmedabad, said that COVID-19 tests were carried out on those who had been brought in dead only if there was a suspicion that the deceased had come in contact with someone who had been infected or had a history of foreign travel or if there was no injury on the body or no explanation for death and if the deceased was young.

As Darshan Desai reported for The Wire, the death toll from COVID-19 in Gujarat has come under a scanner after the tally in the government’s daily bulletin of coronavirus statistics appeared to be considerably lower than the numbers observed at several crematoria in the state.

In Surat, Dr Chandresh Jardosh, president of the Gujarat chapter of the Indian Medical Association, told The Wire: “There is no doubt that the numbers are being underplayed. There seems to be an unwritten policy of not counting deaths of COVID-19 patients with co-morbidities as deaths due to COVID-19.”