Eleven of the deaths in the past three days have been reported from the encephalitis ward, while 25 each have been recorded in the neonatal intensive care unit and general paediatric ward. 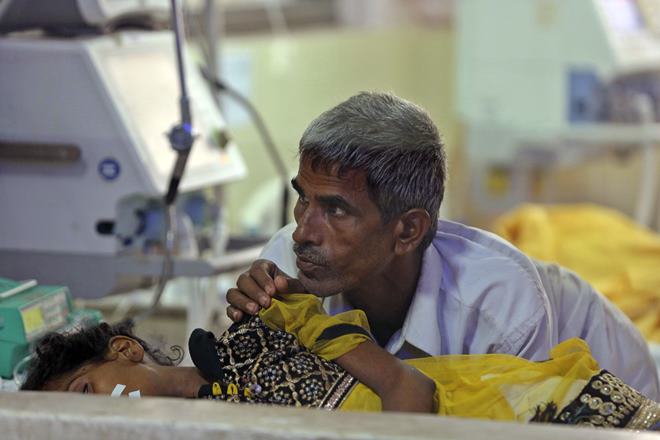 New Delhi: Just days after Gorakhpur’s BRD Medical College made headlines due to the death of over 70 children in a matter of days, panic has struck the Uttar Pradesh hospital once again as 61 more have died there in the last 72 hours.

While the previous deaths may have occurred after oxygen supply was cut off at the state government-run facility (though the government denied this was the reason), the latest bout is being attributed to varied ailments, including encephalitis, health complexities in newborns, pneumonia, sepsis etc. According to a Hindustan Times report, the hospital has seen a substantial increase in these patients, which has led to overcrowding. The local doctors are of the view that the deaths will only increase in the next few days due to rainfall, floods and water-logging – all of which aid the spread of acute encephalitis syndrome (AES).

Eleven of the deaths in the past three days have been reported from the encephalitis ward, while 25 each have been recorded in the neonatal intensive care unit and general paediatric ward.

A recent central panel probe into the mortality situation at the UP hospital had found a severe shortage of medical staff for tending to children and an absence of even the basic hygiene standards. The inquiry had also shed light on the fact that just three of the over 30 nurses in the facility were trained to handle newborns.

Dr R. N. Singh, a paediatrician, told Hindustan Times, “Insufficient homework was done to control the outspread of AES in January, and thereafter the entire machinery remained busy in the UP elections.” Singh further said that heavy monsoon is a major cause for spread of the disease among children and that timely preventative measures like fogging, vaccination and chlorination of water were not taken.

When 30 deaths were reported between August 10-11, according to Indian Express, the Adityanath-led UP government had claimed that the children had died due to encephalitis and other medical reasons and had increased the number of doctors and paramedical staff members in the hospital. The massive inflow of patients, however, has resulted in three-four children being adjusted to a single bed. The Gorakhpur hospital also receives patients from the neighbouring districts of UP, Bihar as well as Nepal, and at any given time, there are about 500 such patients.