Gorakhpur: Adityanath Government Has 23 Reasons for 23 Deaths, But Lack of Oxygen Isn't One of Them

With the government giving 23 natural reasons for the children's deaths, the official line eliminates any human or institutional hand or negligence.

August 10 was a bad day to be a child in Ward 100 of BRD Medical College – though according to the Adityanath government, human error had nothing to do with that. Credit: PTI 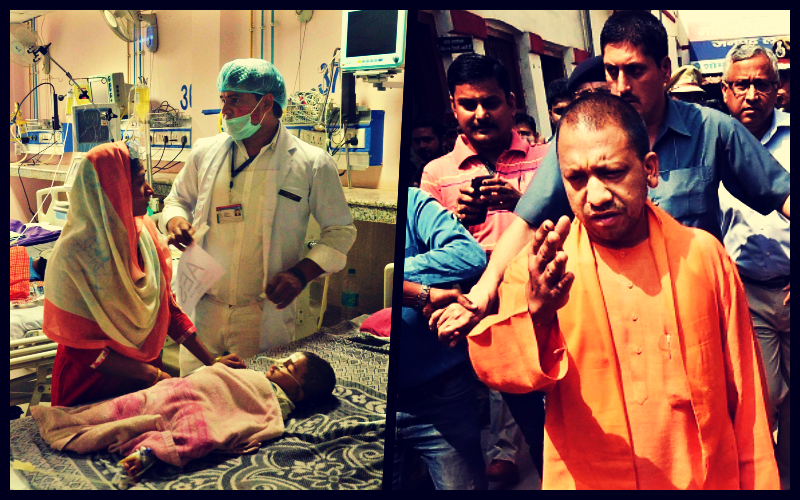 August 10 was a bad day to be a child in Ward 100 of BRD Medical College – though according to the Adityanath government, human error had nothing to do with that. Credit: PTI

New Delhi: According to medical records from August 10, 2017, which The Wire has accessed, none of the 23 children who died that day at BRD Medical College, Gorakhpur, died of a lack of oxygen. As far as the official government record goes, they died of 23 other things, including brain damage, cerebral palsy, low birth weight, sepsis and malnutrition.

August 10 was a bad day to be a child in Ward 100 of BRD Medical College. Of the 23 children who died, six were admitted to the hospital when they were only one day old. Fifteen out of the 23 were less than a year old. The oldest child who died was six years old.

Most of the babies were pre-term babies and with low birth weights. A majority of them also suffered from sepsis and shock. Apart from this, the children’s health issues came in complicated combinations of issues like hypoxic ischemic encephalopathy all at level three, acute kidney injury, respiratory distress syndrome, hepatic encephalopathy, severe acute malnutrition, neonatal jaundice and pneumonia.

Only three of them had acute encephalitis syndrome (AES). Two of the older children had cerebral palsy with mental retardation. In the official record, the government insists that these combinations are the 23 unique reasons for the death of the children.

Ajay Shukla from Kusinagar brought baby Sarika to the hospital on the very day she was born. Sarika seemed to be pulling along for 16 days. She had been plagued with many things – she was a pre-term baby, struggling with hypoxic ischemic encephalopathy, neonatal hyperbilirubinemia and neonatal necrotising enterocolitis. This means she had brain damage, jaundice and bowel disease. Her 16-day struggle came to naught. At 5:10 pm on August 10, she breathed her last.

Similarly, Sonu’s one-day-old baby was being monitored for 11 days. His baby had sepsis with jaundice, and the baby’s short life ended at 8 pm, shortly after the hospital began experiencing difficulties in the flow of oxygen.

At 16 days and 11 days, these new born babies had long lives compared to others neonatals in Ward 100. Jitender’s one-day-old baby, who was brought in at 11 am on August 10, died within an hour. Jitender is a resident of Gorakhpur. His baby was pre-term with low body weight and was experiencing shock.

Sabir Ali Khan came from even further – he brought his four-day-old baby from Bareilly. But the baby died on the same day they reached the Gorakhpur hospital. His baby had pneumonia.

On reading the 23 records, it might certainly be the case that the children suffered from the various issues listed in the document. This does not rule out the fact that they all still struggled with falling oxygen levels on the night of August 10, and according to news reports, even before that.

Going through the list of health issues the children were suffering from, there is no doubt that most of them were heavily reliant on oxygen. “These are all very serious cases,” says Dr Anup Mohta, director of pediatric surgery at Chacha Nehru Bal Chikitsalaya in Delhi.

“The children most in need of oxygen are those with sepsis and shock. Children with cerebral palsy, for example, will not die suddenly as it is a chronic condition. It would have needed a sudden trigger for the children to have simply just died,” says Dr Srinivasan, former head of the pediatrics department at JIPMER in Pondicherry. “This is all very strange. It doesn’t make sense to have sudden deaths like this,” he adds.

In fact, most of the children who died that night were suffering from sepsis and shock in combination with a range of other ailments. HIE, for example, is a type of brain damage which occurs when a baby’s brain does not receive adequate oxygen and blood. It is one of the most common types of brain damage due to the loss of oxygen and can cause cerebral palsy. Hepatic encephalopathy is due to liver failure which leads to brain injury. These are all cases where the children would need stable oxygen.

Was it the hand of god or human negligence?

By now, the government has made statements giving the public just about every combination of this story. The communication happened in about four different ways.

The initial news was about a report of the district magistrate where he described in detail how the hospital ran out of oxygen on the night of August 10. The initial conclusion on cause of death was simple – the children suffocated.

Soon after, a second cause of death began to be circulated – a cause of death somewhat more plausible, but perhaps only because UP reports the highest number of deaths annually from this killer – AES. In 2016, for example, 615 out of 1,277 AES deaths were in UP. ANI reported the same district magistrate as saying that the 30 children died due to some form of encephalitis. This contradicted the magistrate’s own report, where he said that only three of the 23 children who died that day had died from encephalitis, and this figure was reiterated by chief minister Adityanath.

All of this muddled information led the public to believe an epidemic had hit UP. The media soon began to count every death due to encephalitis, without the understanding that that was in fact the red herring – encephalitis is endemic to the region. This doesn’t mean that deaths due to encephalitis do not need attention, but in this particular instance what needs focus and accountability is what is institutional. Did patients die because they were not provided life-saving items?

The communication turned defiant. Government officials began to assert that there had been no shortage of oxygen. The statement of “fact” came fast and from the Twitter handle of the government of UP, who flatly said, “No patient in BRD Medical College Gorakhpur died due to lack of oxygen.” They didn’t go further to provide a cause for the 23 deaths.

As public scrutiny increased and this “fact” was beginning to look implausible, the official explanations took a subtle turn. Officials were no longer saying that there wasn’t a disruption in oxygen, but they were saying that even if there was a break in oxygen, no child died due to it. ANI quoted UP’s minister for medical education as saying, “No deaths due to lack of oxygen supply.” Even the chief minister of UP came around, and the government’s initial surety turned to doubt when he tweeted, “This morning, before I sent my two ministers to Gorakhpur, I asked them if it was true that people had died due to a shortage of oxygen.”

There also seems to be a “new normal” developing for the number of deaths at this Gorakhpur hospital. Sidharth Nath Singh, UP minister for health, told The Wire that seven deaths a day was normal. In a press conference later, he brought up the issue of AES deaths – even though the spike in deaths here is not due to encephalitis – and said 17-18 deaths a day due to encephalitis is normal.

The director general of medical education also said, “This is peak season for encephalitis. It’s clear these deaths have no relation with shortage of oxygen.” These statements are pushing an idea that these are deaths-as-usual, or that there’s an encephalitis outbreak in Gorakhpur. There is no evidence to suggest this yet. UP has in fact been doing well with regards to encephalitis, and numbers have dropped sharply from last year – UP saw 694 deaths over 12 months in 2016, and has seen only 130 deaths over 8 months of 2017.

Singh also said that the deaths at this hospital in August in 2014, 2015 and 2016 were 567, 668 and 587 respectively. This means an average of 19, 22 and 19 deaths a day. However, these figures pertain to the total deaths, including adult mortalities. None of these “new normals” and these various “causes of death” explain why this hospital saw 23 children die on August 10.

If the lack of oxygen was not the reason for the deaths, and there were 23 natural causes for the babies’ deaths, then what explains the sacking of the medical college’s principal and the head of the pediatrics department over their alleged negligence with oxygen? What could be the explanation for the raids on the premises of the oxygen supplier company who had not been paid in over six months and the government’s suggestions that strict action would be taken against this private company?

Parents and the public have now been left to choose between two possible causes of death. Did the children die due to AES and other diseases, which would perhaps indicate the hand of god? Or did they die due to the lack of oxygen, which would indicate human, institutional negligence?

The government has steadfastly denied any mortal hand in the matter by providing 23 natural causes for the 23 deaths. But the sudden spike in the number of deaths and the district magistrate’s original report detailing the lack of oxygen in the hospital leave a lot of questions unanswered.