Gorakhpur: Seven Deaths a Day 'Normal', Says UP Government, Ignoring That There Were 23

The UP government insists that the deaths are unrelated to any oxygen shortage, though they are yet to explain why 23 children died on August 10.

An inside view of a ward of BRD Hospital in Gorakhpur on Friday where at least 30 children died in the past two days, allegedly due to an oxygen supply cut on Friday. Credit: PTI 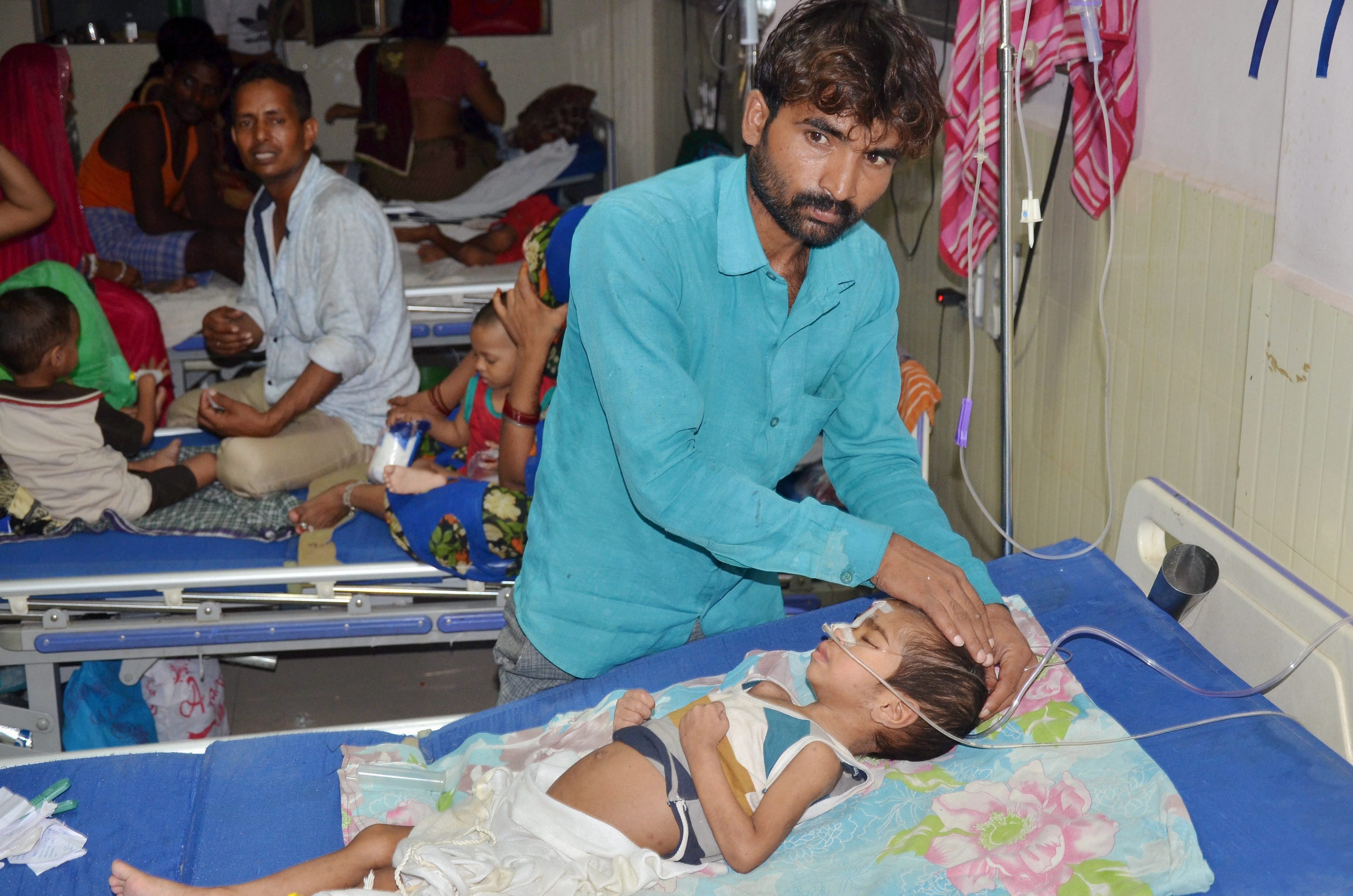 An inside view of a ward of BRD Hospital in Gorakhpur on Friday where at least 30 children died in the past two days, allegedly due to an oxygen supply cut on Friday. Credit: PTI

New Delhi: Faced with outrage at the number of deaths at a Gorakhpur hospital in the last few days, the government of Uttar Pradesh now says that the death of 60 children in five days is not an abnormal figure. “Seven deaths on average per day in this hospital is normal. This is after all a major hospital in Gorakhpur, so obviously people from all over, and from the primary centres, land up here on referrals. Hence numbers of deaths are normally at this range,” said state health minister and government spokesperson Sidharth Nath Singh to The Wire.

Following a blitz of news reports yesterday, beginning in the Hindi press, that 30 children with encephalitis had died in two days due to the lack of oxygen at the Baba Raghav Das Medical College Hospital, the Twitter handle of the government of UP flatly said last night that the news reports were simply untrue. The government did not further clarify what the causes for death were.

What is yet to be clear is even if seven is the average number of deaths, why did 23 children die on August 10 at the hospital?

“The reports about the causes of death are not true and we will conduct a magisterial inquiry, with a report in 24 hours,” said Singh on his way to Gorakhpur. Singh was expected to be at a function in Allahabad with UP chief minister Adityanath today, but the function has been reportedly cancelled as officials now converge in Gorakhpur instead. Adityanath had visited the hospital on August 9, a day when nine children had died.

Two days of chaos as oxygen ran out

Even as the government has assured a quick magisterial inquiry, Rajeev Rautela, the district magistrate of Gorakhpur, had already submitted a report on August 11 about the shortage of oxygen in the BRD Hospital. August 10 was the day oxygen ran out in the hospital and was also the day the hospital saw a spurt in deaths, with 23 children dying.

#UttarPradesh A total number of 60 deaths have occurred in the past 5 days: Baba Raghav Das Medical College and Hospital #Gorakhpur pic.twitter.com/K8yBBRkrFV

Rautela’s report is a brief one, but describes two days of chaos in BRD Hospital on August 10 and 11 when the oxygen supply ran out and the local administration began an urgent, all-night process to source oxygen from two private suppliers. “On 10 August at 7.30pm, liquid oxygen pressure went down and so we used 52 reserve oxygen cylinders to keep operations running,” began the report.

After that the report goes on to describe the two frantic days to keep oxygen going. After midnight on August 11, the hospital had somehow managed to source 50 oxygen cylinders from a company called IGL in Faizabad. They came by 1:30 am. Another tranche of cylinders from the same company came a few hours later. A batch of 22 cylinders and another batch of 36 cylinders later came from Modi Pharma, a Gorakhpur-based company. A hundred empty cylinders from the hospital were also sent to Modi Pharma. The district magistrate’s report ended with a hope that 100 more cylinders were expected from IGL soon. “This is how we managed the arrangement of oxygen for the patients,” said the report in conclusion. 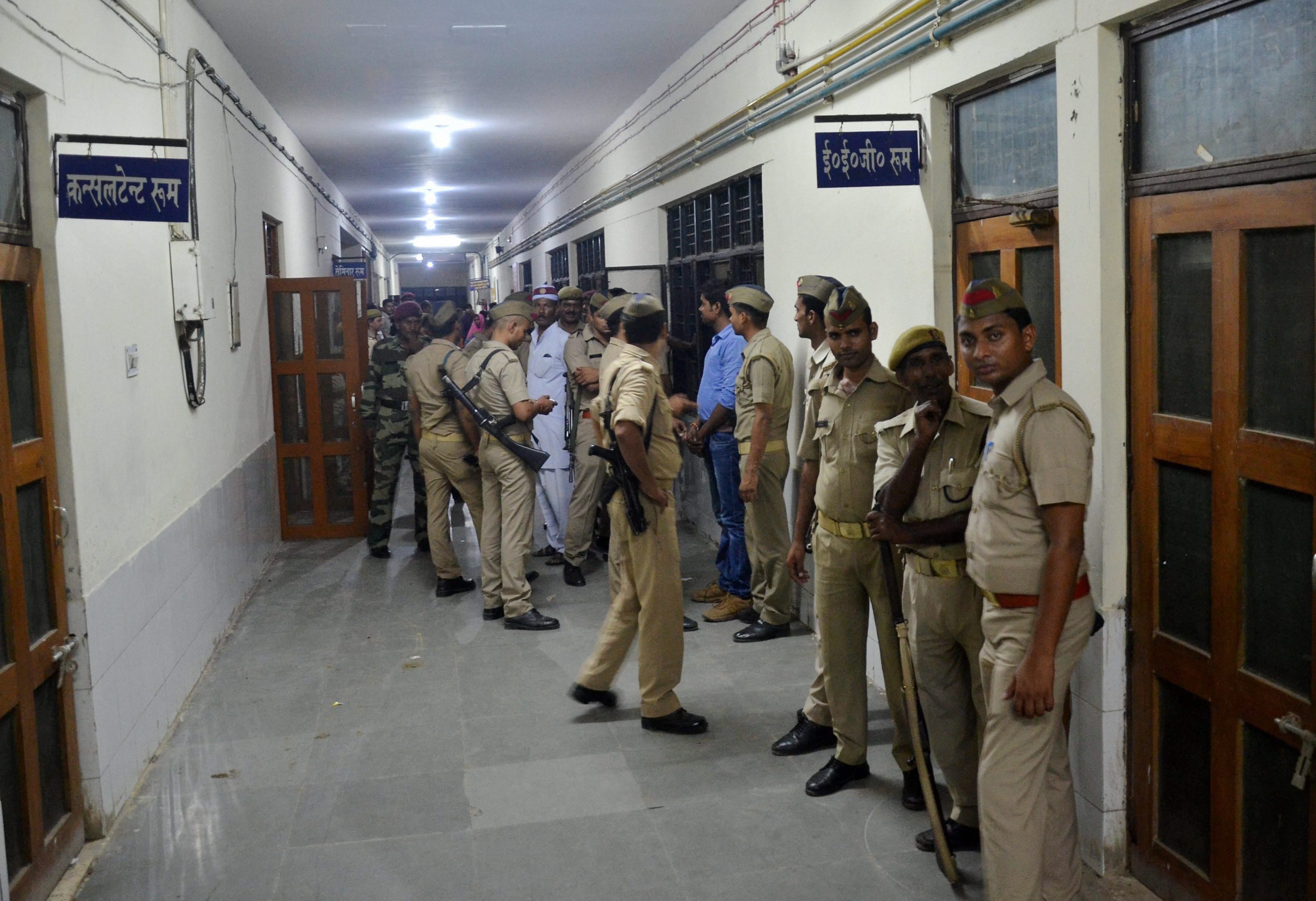 UP police inside the BRD Hospital for an investigation into the deaths. Credit: PTI

“There was no break in the oxygen supply on any day,” says K.K. Gupta, director general of medical education in UP. “We will take action against the companies who stopped the supply of oxygen. They should have some of the responsibility when they know that oxygen is a life-saving item,” he says.

However, the government’s own role in the lack of the life-saving item is that they had not paid the private companies who had been supplying oxygen to BRD Hospital. According to news reports, the companies had written repeatedly to the government of UP to clear their payments of about Rs 68 lakh. “Payments is an ongoing issue, it keeps happening, there is nothing unusual in these payments,” said Gupta.

Ashutosh Tandon, UP’s minister for medical education, said that at least about yesterday’s deaths, none were due to lack of oxygen.

No deaths due to lack of oxygen supply & 7 people have died today :Ashutosh Tondon, UP medical education minister #Gorakhpur pic.twitter.com/1z8fFQtVBn

ANI quoted him as saying three deaths happened in the neonatal ICU, two deaths were due to acute encephalitis syndrome (AES) and two were non-AES deaths. There is still no explanation for why 23 deaths were reported the previous day, August 10, when oxygen ran out, and whether there’s a link between the two.

3 deaths happened in Neonatal ICU,2 due to acute encephalitis syndrome (AES)&2 due to Non-AES today: A Tondon, UP medical edu min #Gorakhpur pic.twitter.com/BuOETRGqIY