With hospitals shutting doors and authorities missing in action, patients lie in the shade of a neem tree with glucose bottles hanging from its branches thinking that it will improve their oxygen levels.

Jewar (Uttar Pradesh): In Uttar Pradesh’s Mewla Gopalgarh village, roughly 70 kilometres from the national capital of New Delhi, a makeshift hospital has emerged for COVID-19 patients as well as for people complaining of COVID-19 symptoms as they struggle to find a bed in hospitals, both government and private.

What the villagers call a “hospital” is actually an open ground near the village’s entrance where several sick people lie on a cot under a big neem tree. Attached to the tree are glucose bottles to be used for patients from time to time. The condition in this village is symptomatic of issues faced by the entire rural population in UP during a raging pandemic due to the miserable health infrastructure in the state.

On one side, patients lie on cots under the neem tree thinking that their oxygen levels would get better due to the tree’s healing properties. On another side, a heap of cow dung, the smell of which engulfs the whole of the open ground. In the middle of several cots under the tree is a table where medicines and other medical equipment are kept. 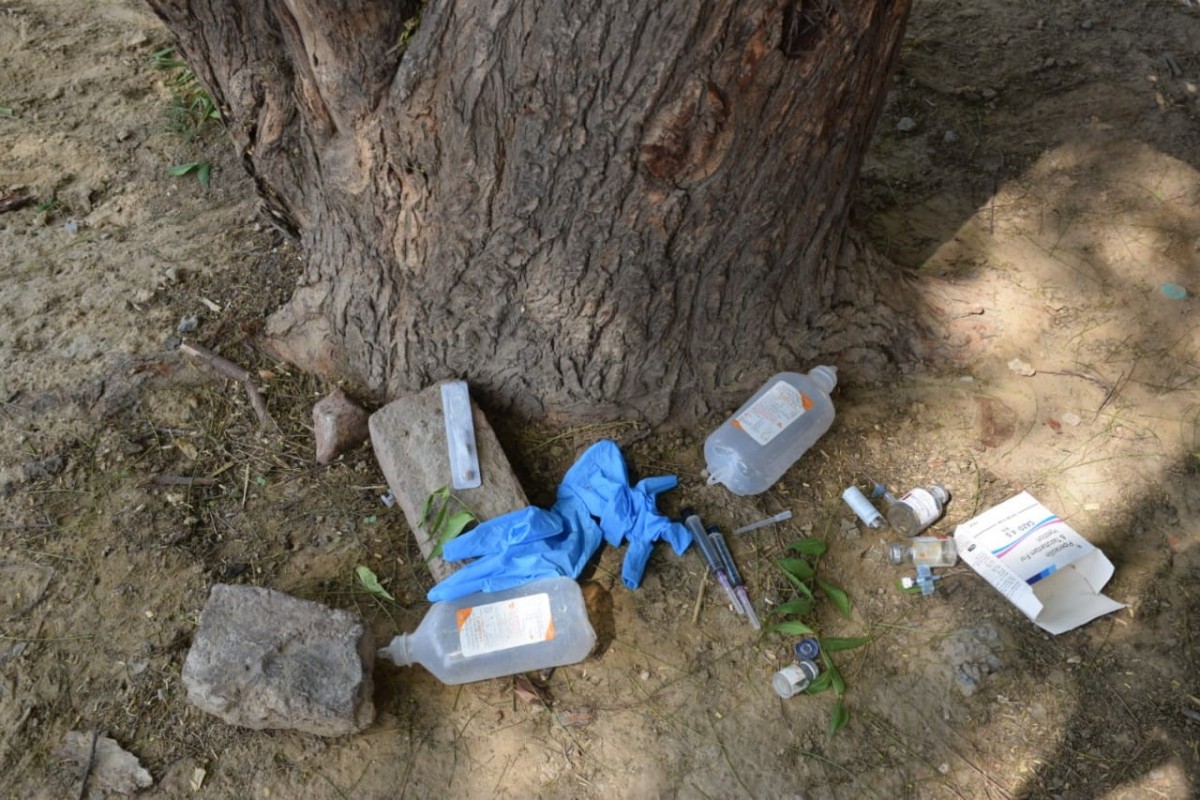 A certain space is marked under the neem tree for the most “critical” patients, who mostly include the elderly. Patients spend most part of the day under the tree on their cots and return to their houses late in the evening when it is completely dark. Some of them worry that they may infect their family members.

Meanwhile, some elderly are seen discussing under the tree that there will no old people left in the village anymore. They say that when their relatives visit the village and inquire about someone, they would say that COVID-19 took them away.

An oxygen cylinder lies next to Harveer Kumar’s cot, a 65-year-old Covid positive patient who had been complaining of fever, cough, fatigue and shortness of breath since he got vaccinated on April 29 in Noida. Yesterday, May 14, 15 days after he fell sick, he was finally tested. His test result came back positive for COVID-19. 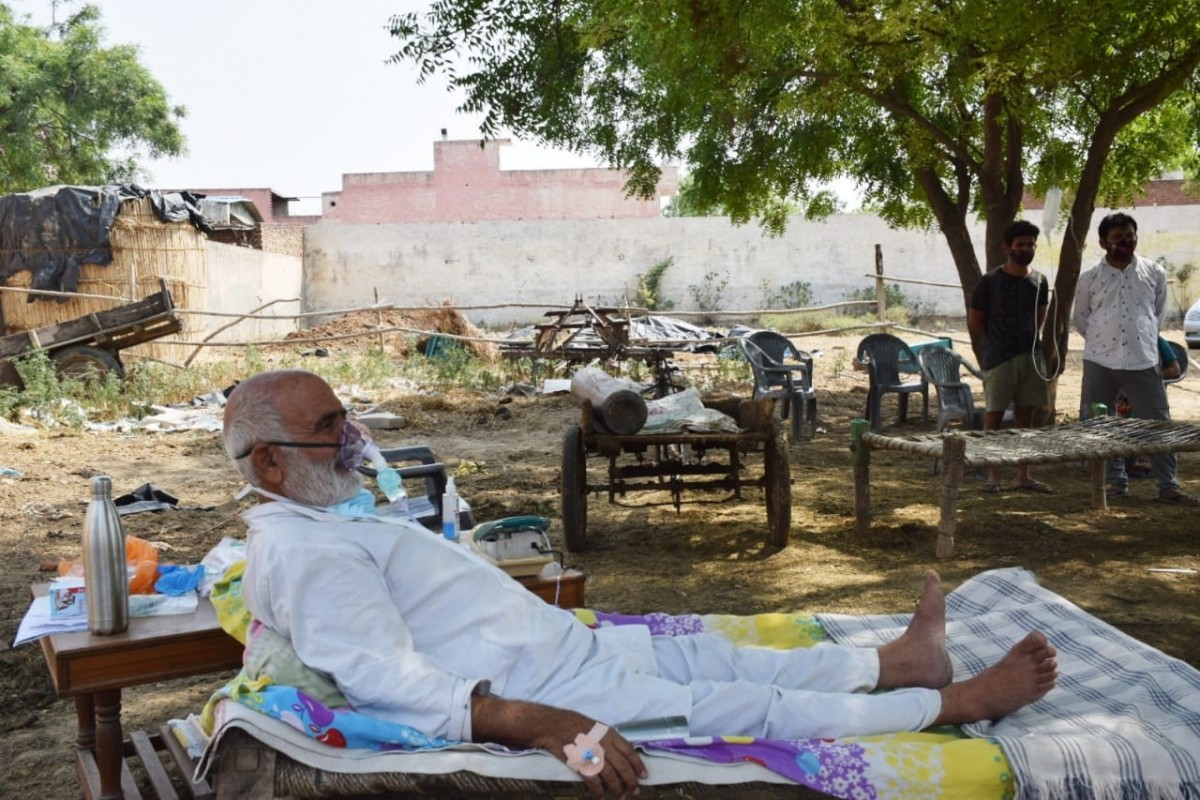 He struggles to speak but manages to express his anguish towards the administration, which he says is not providing people with resources. “So far, I have only been given medicine by a doctor from a nearby village. I need to be admitted,” he manages to say while speaking to The Wire.

More than six people have recovered so far after getting treatment from local doctors under the neem tree. The villagers blame this surge due to the panchayat polls conducted in the state the previous month.

Yogesh Talan, former pradhan of the village, says that since the panchayat elections on April 19, an unusually high number have complained of sickness. “Not a single house where nobody is experiencing cough or fever. The administration has failed terribly on two fronts, testing and providing medical facilities to the sick. People are feeling helpless in this village,” he told The Wire.

He adds, “The hospitals are refusing to admit patients who are experiencing even major symptoms and suffering from high fever.”

Manoj Kumar, Harveer Kumar’s son, complains that his father was refused by several hospitals, both private and public when he fell severely sick. “We first took him to a private hospital that told us they couldn’t admit him. The district hospital told us the same thing, so we had to bring him back to the village,” he told The Wire.

At around midnight on Friday, May 14, Harveer Kumar started experiencing shortness of breath. “He had been experiencing minor symptoms for a lot of days, but last night he just couldn’t breathe. It was really bad,” his son said. His oxygen level had dropped to 82. “We have never seen him so sick,” his son laments.

Manoj then arranged an oxygen cylinder for him at around 1 am after much difficulty.

However, the villagers say that this old man is lucky as he was able to get tested after being sick for over 15 days. “I wish they would test more people in my village, all of them are just surviving by taking prescriptions from local doctors,” says a resident.

Four people have officially died of COVID-19 in the village in the past 15 days and more than 50 have reported symptoms. None have been tested so far.

Doctor Pawan Kumar, who had come to test Harveer Kumar on Friday as per the directions of the district magistrate Suhas L.Y., says that testing for COVID-19 is being conducted in several villages. Speaking to The Wire, he says, “The administration is doing very good work, distributing medical kits and trying to help patients through all means.”

However, the villagers dispute this claim.

“There are no facilities in this village as the administration claims. The only facility we have is this neem tree,” Surendra Talan, another resident tells The Wire. Talan boasts of having recovered from COVID-19 while getting treatment under this tree even though he was never tested for COVID-19. “I was here for 19 days while receiving treatment. I can now eat and drink well,” he says.

He further tells The Wire that from glucose bottles and injections to oxygen cylinders, all the medical equipment was arranged by the villagers, and the administration had not provided them with any relief. 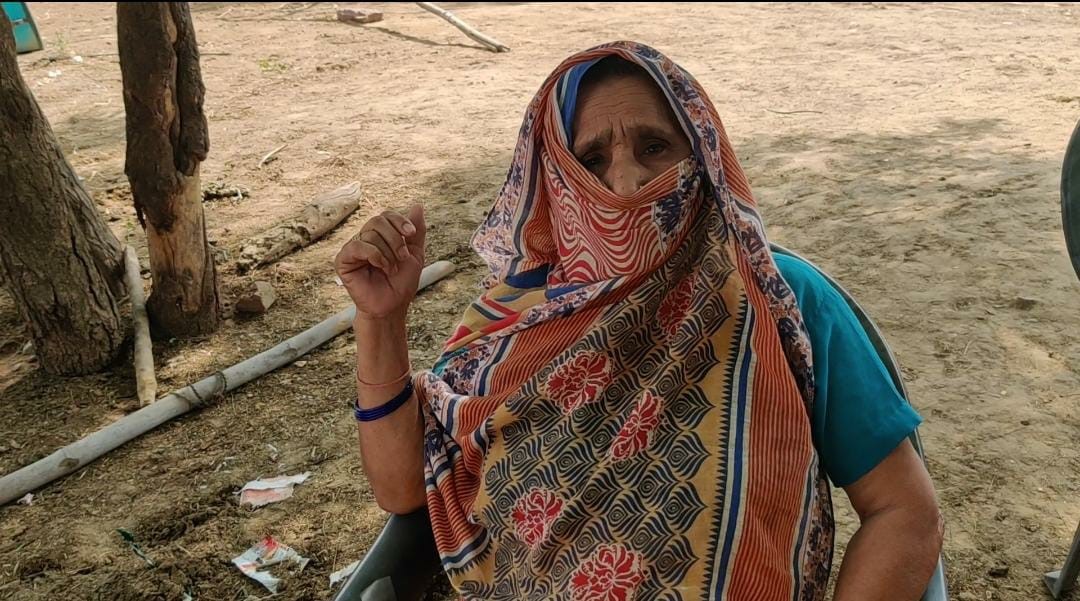 Another elderly woman, Gangwati Devi was also unwell and started her treatment under the neem tree when she started showing symptoms. She, too, was never tested for Covid-19 even though she says that she was experiencing symptoms.

Her grandson, Nikhil, is critical of the administration. He says, “When videos of this place started getting viral on social media, a doctor came and claimed that he was sent by the district magistrate. Otherwise, people have been sitting here sick for several days and nobody asked.”

Varun, a resident of the village, says that even though a sanitation drive was conducted in the village during the first wave of COVID-19, no such drive has been conducted during this wave.

“There is no COVID-19 testing happening. Poor people are going to hospitals and not getting admitted because of which they are being treated by local doctors in the village under this tree itself,” he says.

The doctors who come to see the patients come from a nearby village. Some of these doctors are not certified, he adds.

Doctor Deepak Auri, the chief medical officer, says that the administration has taken cognisance of the problem and is working to improve the situation. When The Wire contacted DM Suhas L.Y. for a comment, his secretary picked up the phone and said that he is busy with meetings.