More than 900 dead bodies have reportedly been buried along the river in Unnao alone last week.

Bodies buried in the sand on the banks of Ganga river, as coronavirus cases surge, in Unnao district, Thursday, May 13, 2021. Photo: PTI

The Wire Staff
Government
Health
15/May/2021

New Delhi: The devastating second wave of the coronavirus pandemic is slowly turning into a horror story in India’s most populous state, Uttar Pradesh.

Days after Bihar’s Buxar district authorities said that at least 71 bodies of suspected COVID-19 victims from the neighbouring eastern UP were washed ashore at the banks of the river Ganga in the downstream Chausa village, several English and Hindi dailies reported that over 2,000 dead bodies in various UP districts were found to be hastily buried or abandoned along the banks of Ganga.

Similar ghastly sights were recorded in Ghaziabad, Kanpur, Unnao, Ghazipur, Kannauj and Ballia regions – reported to be worst-affected by the pandemic. According to one report by the Hindi daily Dainik Bhaskar, more than 900 dead bodies had been buried along the river in Unnao alone last week. It pegged the numbers to be 350 in Kannauj, 400 in Kanpur, and 280 in Ghazipur, even as it reported that such deaths have been shooting up in different districts of central and eastern UP.

When the Indian Express interviewed family members of some of the victims, they revealed that they either didn’t have enough financial resources or felt stigmatised to offer respectful cremations to the dead.

In Unnao, at least 200 such dead bodies were laid bare by shifting sand along the Ganga after heavy downpour this week. In Ghaziabad, at least five unclaimed bodies were found at the Gehmar ghat in Ghazipur after their barely three-feet burial pits were washed out by the river. Many dead bodies, possibly abandoned, were also found to be floating in the river.

“It was a sight that I have never seen before. We used boats to pull the bodies to the shore. The whole air was filled with the stench of death. The Gangaji turns here at Gahmar, so the bodies flowing downstream accumulate here. There could not have been fewer than 80 bodies,” a cremation ground worker Kamla Devi Dom told the daily.

The Hindustan Times reported that hundreds of shallow graves were discovered on the banks of Ganga in Unnao, Ballia and Ghazipur over the last few days.

“At least 150 corpses have been found floating in the Ganga in Ballia and Ghazipur districts of Uttar Pradesh and Buxar and Patna districts of Bihar, prompting the central government and the National Human Rights Commission to take serious note of the matter,” the daily said.

“There is a tradition of people being buried here but I have never seen so many graves before,” said Ajay Deep Singh Bais, a resident of Kannauj. 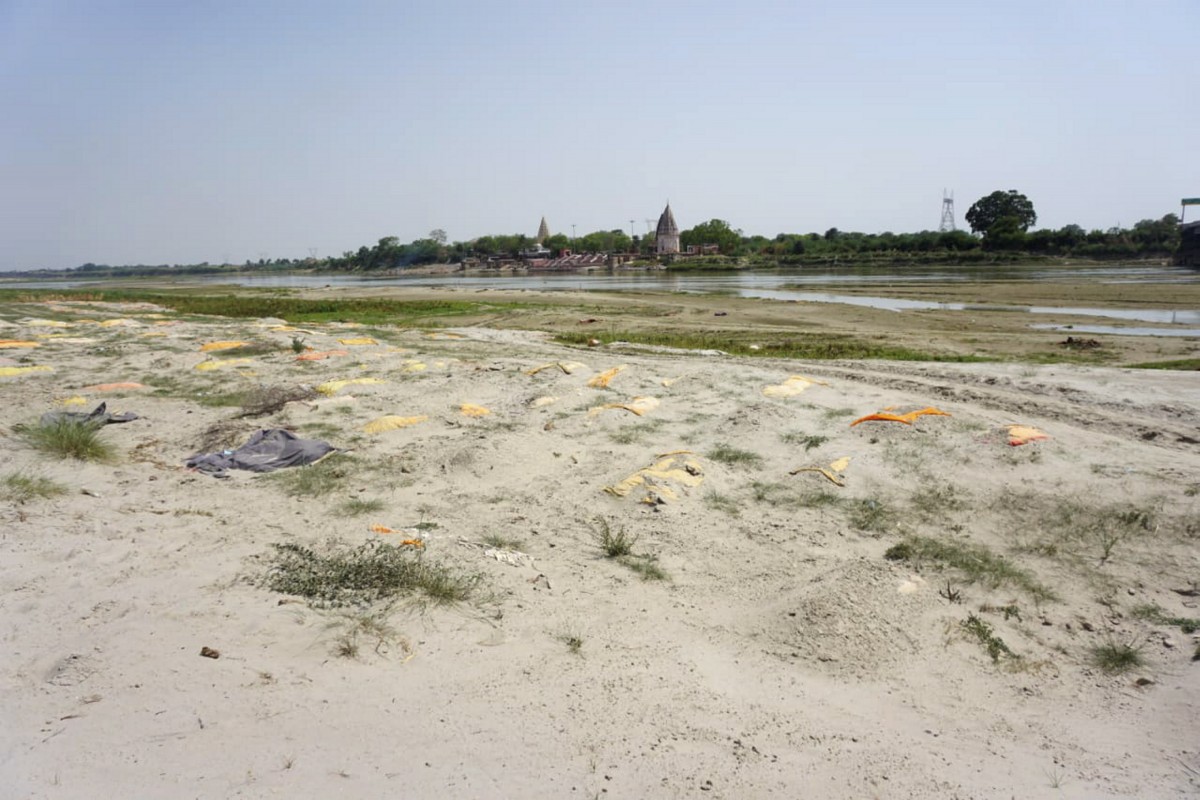 The district administrations, since Friday, have been having a hard time to dispose of the bodies “either by cremating them, or by burying them deep in the sand”, the Indian Express reported. The Adityanath-led BJP state government has ordered its home department to deploy the State Disaster Response Force (SDRF) and the Jal Police of PAC for patrolling all the rivers to prevent the dumping of bodies.

Speaking to the Indian Express, Unnao district magistrate Ravindra Kumar said that the state administration is trying its best to “convince people to go for cremation”. However, many complained that amidst the rising casualties of the pandemic, the cost of cremations has gone up several fold. “A pyre that earlier used to cost around Rs 500 now costs around Rs 1,500-Rs 2,000, and the entire process of cremation costs around Rs 10,000,” said Pradeep Kumar, who works as a barber in one such cremation grounds.

“Only around 15 days ago, a local resident was buried in the sand. He was an alcoholic. After the recent rains, the sand got washed away and dogs dug up his body. I see that a lot of people are burying bodies here as they cannot afford to cremate them,” he said.

“How will I have money to buy wood, pay the priest and cremate the body,” asked one Motu Kashyap, a lowly-paid agricultural worker who buried his 87-year-old father Pyare Lal on Friday.

There is panic among people in many parts of the state where such sights of dead bodies have become common, with hundreds of such burial spots lying exposed after a heavy downpour on Friday.

At the Baskar ghat of Unnao, where people from all adjoining districts also come to cremate the dead, the numbers of dead bodies has gone up in the last few weeks, but not all have been able to afford the cost of cremation, forcing them to opt for a rushed burial. A family of daily wagers looking to cremate their mother were in a similar position. “We asked how much it would cost. Normally wood at the ghats is for Rs 600 a quintal, and three quintals are needed to burn a body. Now, we were quoted Rs 1,000 a quintal. On top of that, the money for the Dom, and the ghee, and the rites would have meant Rs 4,500. It is money we did not have. We can only do this because the administration arranged for the wood,” says one among them.

A police official, Hari Narayan Shukla told the Indian Express that his teams are patrolling a 25-km stretch to ensure that dead bodies are not dumped into the river. He pointed out another problem that may have led to the tragedy. “People are afraid of Covid, and don’t want to touch the bodies. There is a shortage of wood, too.”

Eastward of UP in Bihar, the state administration has begun retrieving the dead bodies flowing into the state through the river Ganga by taking a drastic step. It has placed a big net in the river at Ranighat, bordering UP and Bihar to recover bodies. Bihar’s water resources minister Sanjay Jha tweeted to inform about the move, and added that all the recovered bodies were cremated “as per protocols”. Buxar civil surgeon Jitendra Nath advised people not to use river water for bathing and other purposes to avoid risks of getting infected from the decomposed bodies.

However, none of the state officials confirmed whether the bodies which were found floating in the river were COVID-19 positive. Yet, they have been in touch with their UP counterparts to prevent dead bodies from flowing into the state. The Patna high court has also asked the Bihar government to file an affidavit regarding the matter by Thursday to push the UP government to take some action.