In India, rotavirus infections kill 98,000 children every year. Kang has been working on determining how many cases are added each year and where, and their possible control. 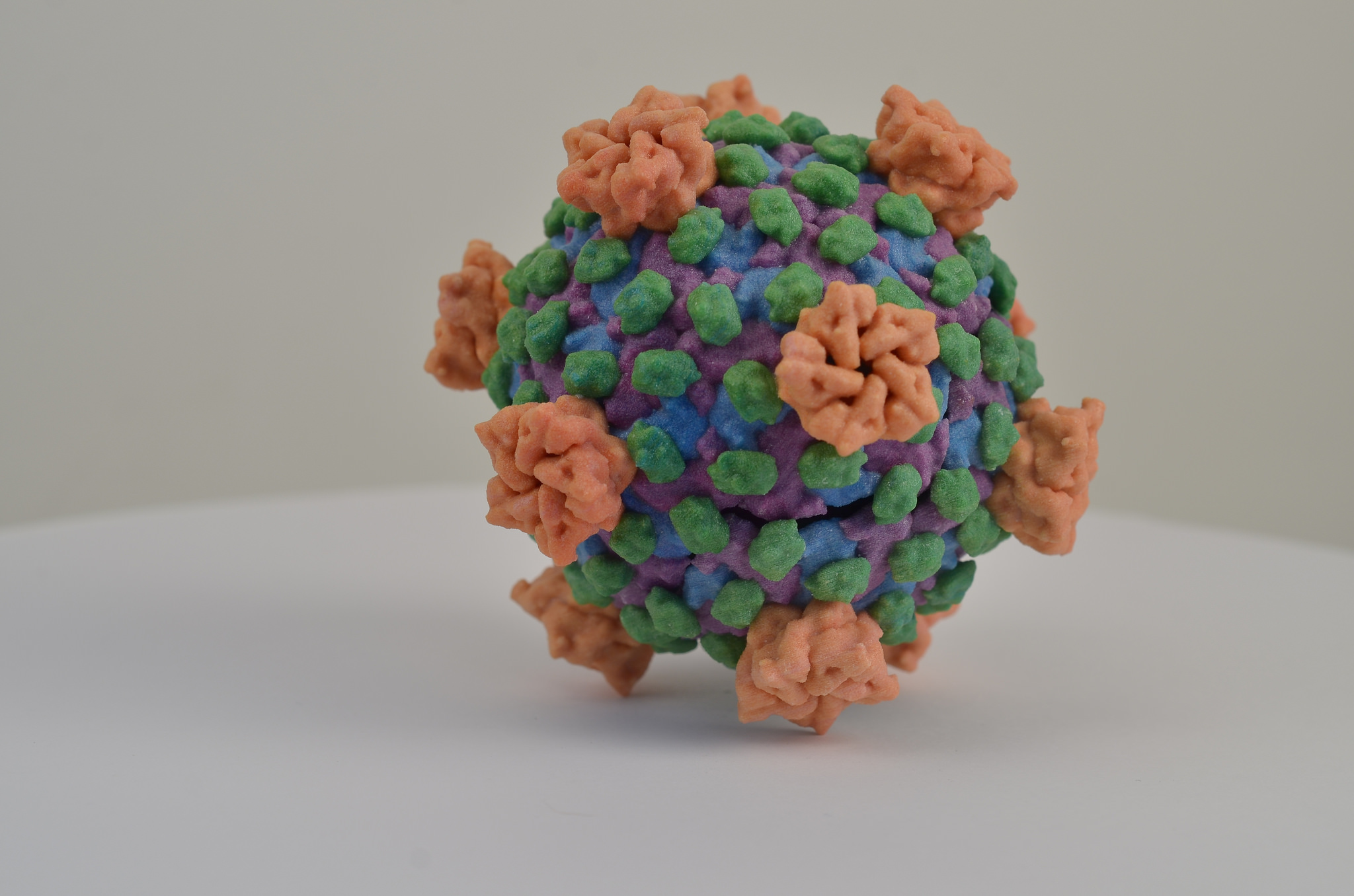 A 3D print of reovirus. Rotavirus, a type of reovirus, is the major worldwide cause of severe childhood diarrhoea. Its mitigation has been the subject of the research of Gagandeep Kang. Caption & credit: niaid/Flickr, CC BY 2.0

“It is amateurs who have one big bright beautiful idea that they can never abandon. Professionals know that they have to produce theory after theory before they are likely to hit the jackpot.” Francis Crick’s quote keeps Gagandeep Kang, the Infosys Prize winner in life sciences in 2016, motivated each time an oral vaccine does perform the way her team of researchers hope it would. In her quest for diarrhoea vaccines and workable solutions for public health, Kang literally traverses from south India to the north and back.

Kang is a professor and head of the Wellcome Trust Research Laboratory; the division of gastrointestinal sciences at Christian Medical College (CMC), Vellore; the executive director of the Translational Health Science and Technology Institute (THSTI) in Faridabad; and the current chair of the WHO Southeast-Asia region’s Immunisation Technical Advisory Group.

She is yet another of India’s sterling women scientists who has been quietly steering vaccine and translation research in the country. One may come up with some exciting medical research findings in a laboratory – but the real test often lies in the long, arduous process of making that exciting finding a practical, affordable medical product, a technique or a drug, that doctors can use in clinics. This is where translation research comes in.

Her focus has been on diarrhoeal diseases, working on rotavirus that causes diarrhoea in babies and infants, leading to vomiting and dehydration. The WHO’s South East Asia Region Organisation (SEARO) estimates that rotavirus kills approximately 453,000 children under five years of age worldwide every year, and of whom 1,27,000 children are from Southeast Asia and 98,000 from India. Also in India, about 900,000 children are admitted to hospital due to episodes of severe diarrhoea and 3.3 million cases are reported in hospital OPD every year.

WHO describes it as a major threat to the health of children across Southeast Asia. In March this year, India launched the rotavirus vaccine as part of the national immunisation programme.

Kang has been working on rotavirus epidemiology: determining how many cases are added each year, its patterns of spread and distribution, and possible control of the infection. She has also been working on the rotavirus vaccine since the early 1990s. Some pioneering work includes the largest study that tracked new born babies for infection, with which she was able to show that protection after infection is lower among Indian infants than among infants in the west. Another study investigated the efficacy of a monovalent rotavirus vaccine in Indian settings. “CMC is a wonderful institution in the freedom I got to pursue my interests in research and build a group to answers questions that we considered important,” says Kang. “Lately, my role in research became to decide what kinds of questions we would address and how, while my amazing colleagues came up with high quality assays and tools and then dealt with the deluge of samples and data to get the outputs which we analysed and interpreted together.”

So when the THSTI was set up in 2009, as an autonomous institution under the Department of Biotechnology, to accelerate healthcare solutions that would meet the needs of a rapidly developing economy, it was but natural for Kang to take a lead role. The institute has since been engaged in cutting-edge, multidisciplinary translational research to fast-forward the development of concepts into tangible public health products – instead of leaving them to the restricted glory of international peer-reviewed journals and citations.

“I see coming to THSTI as a way of being able to take on even larger questions that matter for health in India,” says Kang. “The THSTI is unique, more multi-disciplinary than any other research institution in India and positioned to be transformative in its approach to understanding disease biology and developing interventions.” As for the award: she thinks it’s important “because it recognises the difficulty of comprehensive approaches to human health research. It takes skilled and dedicated people who work as a team to answer questions that matter for us and for our children.”

For her, the most significant contribution in science was in showing her peers that “failure teaches you much more than success. Of the many interventions we have tested to improve the response of children to oral vaccines, nothing has worked well. I think that is hugely important for us to understand the complexity of our interactions with the environment and how that affects our health.”

Kang’s research has meanwhile been gaining national recognition over the past decade, beginning with the ‘Woman Bioscientist of the Year’ award in 2006. In 2008, she became Fellow of the Royal College of Pathologists, London; in 2010, Fellow of the American Academy of Microbiology. Back home, she was elected fellow of the Indian Academy of Sciences, Bengaluru, in 2011; and to the National Academy of Sciences, Allahabad, in 2013. The year 2016 held a double bonanza for Kang: she was elected fellow to the Indian National Science Academy (INSA) and won the Infosys Prize soon after.

Besides research, Kang is part of review committees for several national and international research funding agencies as well as vaccine advisory committees, including India’s National Technical Advisory Group on Immunisation, the WHO’s Global Advisory Committee on Vaccine Safety and the Immunisation and Vaccine Implementation Research Advisory Committee. She is also an associate editor for the open-access journal PLOS Neglected Tropical Diseases, serves on the editorial board of the journal Nature Scientific Reports, and is both the first woman and the first Indian to edit Manson’s Tropical Diseases (23rd edition), a respected compendium of discussions on tropical infectious diseases.

And she still finds time for reading and running. “I am intensely curious about how and why things are the way they are, why things work or don’t work, what it takes to fix something that doesn’t work – I have lots of questions and spend a lot of time deciding what not to do! In the next few years, both at CMC and at THSTI, we will be expanding in scale and scope to use new technologies to answer questions on infectious and non-communicable diseases.”

Kang is the ninth woman to win an Infosys Prize since it was instituted in 2008, among a total of 50 laureates. This year, V. Kumaran from the Indian Institute of Science, Bengaluru, won the engineering part of the prize for his work on complex fluids and flows. Sunil Amrith, a professor of South Asian studies at Harvard University, Boston, won the humanities prize for, among other things, his “field-changing research on the interrelated past of contemporary Asia”. The mathematics prize was bagged by Akshay Venkatesh, of Stanford University, for his work in number theory. Anil Bhardwaj, an ISRO scientist, became the physical sciences winner for his experiments onboard the Chandrayaan 1 and Mars Orbiter missions. Kaivan Munshi, an economist at Cambridge University, won the social sciences prize for his contributions to understanding how ethnic groups and castes contribute to economic development.