Wanted: A Commission of Inquiry into the Government’s Disastrous Handling of COVID Crisis

The second surge of COVID-19 has caused a national calamity the likes of which India has not seen since independence, and there is growing evidence that it could have been countered – and appropriate steps taken – to minimise its deadly impact. 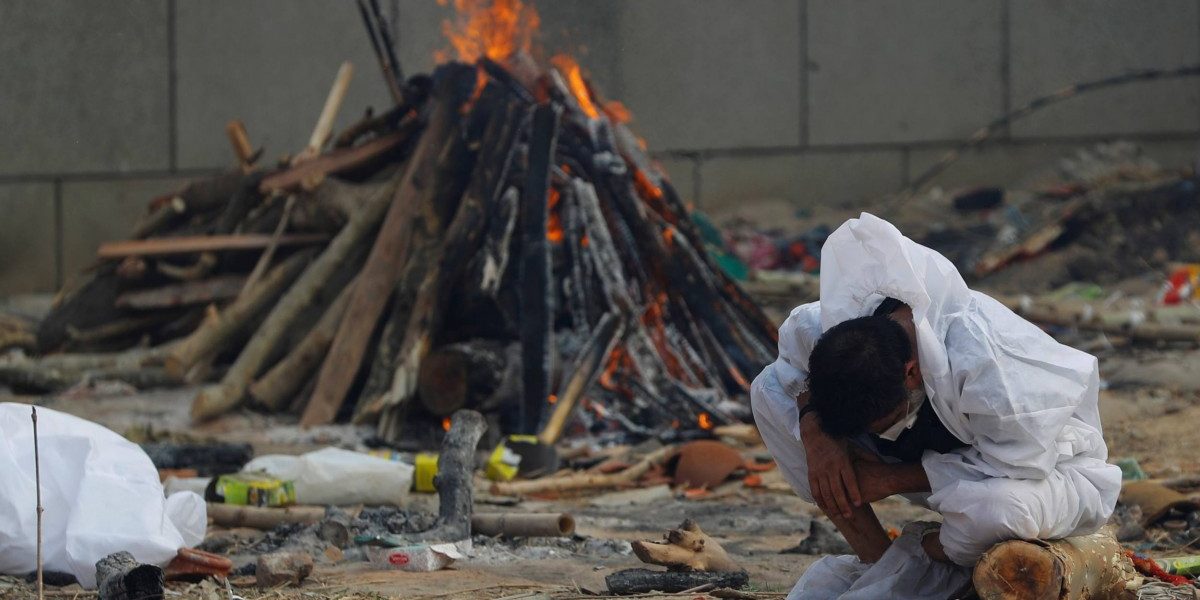 A man mourns as he sits next to the burning pyre of a relative, who died from the coronavirus disease (COVID-19), during his cremation, at a crematorium in New Delhi, India May 5, 2021. Photo: Reuters/Adnan Abidi

As the devastating second surge of the SARS-CoV-2 virus continues unabated, the Supreme Court and multiple high courts have been looking at various dimensions of the gross mismanagement of the public health crisis across the country.

While the high courts are mainly going into aspects relating to immediate relief for people suffering from the lack of oxygen, medicines and hospital beds, the Supreme Court has raised the larger question of the right to health as an extension of the right to life flowing from Article 21 of the constitution.

These deliberations are welcome, but there is also a pressing need to set up a formal judicial commission of inquiry with at least three sitting Supreme Court judges to take a 360-degree look at how India’s COVID-19 management system collapsed and came to this sorry pass. This is the very least we owe to those whose lives were lost due to the sheer callousness of the decisions taken or not taken by the government and its leadership, especially Prime Minister Narendra Modi.

The second surge of COVID-19 has caused a national calamity the likes of which India has not seen since independence. Worse, there is growing evidence that this wave could have been countered – and appropriate steps taken – to minimise its deadly impact. The first wave overwhelmed healthcare systems everywhere, even in affluent countries, but no country that went on to its second or third waves has seen the kind of chaos and deaths that India has. Or the kind of official bloody-mindedness that was on display with the green-lighting of potential super-spreading gatherings for politically expedient reasons.

India now accounts for half of the world’s new infections and the test positivity rate in many parts of the country is upward of 30%. It is another matter that the testing infrastructure is itself under severe strain and deaths are being grossly under counted. The intensity of the second surge can be gauged from the simple statistic that it took India 12 months to reach 10 million recorded cases but just four months to hit 20 million. Why the government didn’t anticipate and act upon the surge is a question that must be answered.

Rakesh Mishra, a member of the Indian SARS-CoV-2 Genome Sequencing Consortia (INSACOG) – which is in charge of identifying and studying the behaviour of virus variants in the country – said recently that experts had warned in early March that it was “very, very clear [that] there is real danger and a threatening situation”. This was just before health minister Harsh Vardhan was speaking triumphantly of the ‘endgame of the pandemic’.

Also read: COVID-19 Patients Dying Due to Oxygen Shortage Is Not Less Than a Genocide: Allahabad HC

Mishra told The Wire it was unlikely that Prime Minister Modi would not have been briefed about this danger by his advisors. If this is true, then the prime minister’s personal culpability and indeed criminal negligence get heightened because he disregarded not just common sense but expert opinion by choosing to go ahead with massive election meetings and the Kumbh Mela in Haridwar, and not taking steps to boost the preparedness of the public health system.

The data shows 90 lakh people attended the Kumbh in March and April, and the impact of this on the spread of COVID-19 should be a subject of special technical inquiry. The deadly effect of the Haridwar returnees across rural north India is being felt on a daily basis.

Modi declared premature victory over COVID-19 and consequently the Centre’s COVID-19 task force, which had stopped meeting regularly, took its eyes off critical aspects of disease management despite the inevitability of the second wave.

India had five months of relative respite from new infections from October 2020. The rest of the world used the gap between the first and second waves to boost public health infrastructure and order enough vaccine doses for their populations. The Modi government was lax on both counts. Not only did it fail to ramp up critical infrastructure, such as oxygen and medicines, it also made no effort to provide for and pre-order a critical mass of vaccines. The second omission is particularly galling considering India’s claim to be the “pharmacy of the world”.

The current wave of infections may recede on its own in a few weeks but will we go back to our old ways then? One way to emerge stronger from this crisis is to begin acknowledging mistakes made in the past. A formal enquiry commission with independent scientific assistance must be set up in the spirit of introspection to ensure such mistakes are not repeated in the future. The commission should look into the manner in which key decisions over the past year were taken –  from the government’s initial responses (including the sudden lockdown) to the systems that were put in place to expand critical care, its vaccine policy, the collection of data, the raising of funds through PM-CARES, the allocation of medical resources across states, the attempts to gag the media and even patients, the nature and appropriateness of official and ministerial pronouncements, etc.

Such a commission must have the power to summon and examine all relevant officials and documents, including the inputs, if any, that were sought or received from official and non-official experts at each stage of decision making. Needless to say, the commission of inquiry must conduct its proceedings promptly and in the open; there can be no room for ‘sealed covers’ or in camera hearings.

Some may argue that saving lives must be the priority, not fixing responsibility for past actions. While it is not just past actions but current ones which are exacerbating the problem, the proposed Commission can always start its work later. However, the fact that everything is going to be reviewed must be made known to all decision makers and implementers now.

The prime minister may baulk at the prospect of a transparent inquiry but the manner in which he has brought the country to its knees leaves no other option. At the end of the day, the lives of millions of Indians is worth more than the risk of damage to the reputation and standing of one man.