Down in the Dumps: The Tale of Delhi's Waste Pickers

Waste pickers provide services that benefit the environment yet face harrowing occupational hazards and are exposed to toxins in the absence of protective gear. 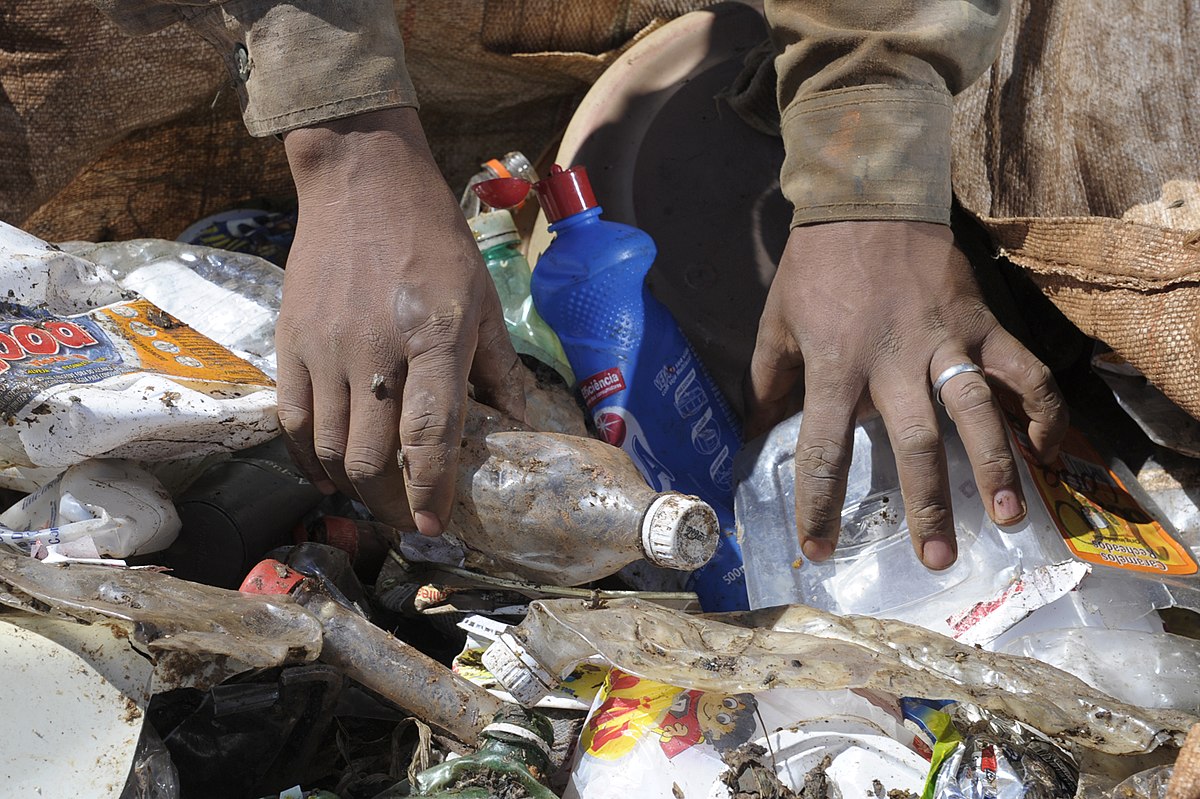 Eight-year-old Meera (name changed) got ill after eating filthy food remains from a dump at Mansarovar park in Delhi. Children like her work in filthy environments, rummaging through hazardous waste with bare hands and feet. They play in these dumping ground strewn with syringes, scrap iron, rotting waste, solid and liquid household waste.

Waste picking is an informal sector which is labour-intensive, lacking health facilities, safety and legal cover. Waste pickers collect garbage in search of recyclable items like paper, plastic etc., that can be sold to scrap dealers or kacchra seths (waste merchants). Waste pickers do most of the dirty work and together with the rest of the value chain, comprising scrap dealers and recyclers, play an unrecognised but important role in the city’s waste management system.

Unskilled and unpaid, uncared for

Estimates suggest that waste pickers help recycle 20-25% of Delhi’s massive 10,000 metric tonnes of daily waste. About 90% of the unsorted waste ends up in the dumps. Urban local bodies are responsible for waste management but in reality, the current civic waste management system would break down if not for the valuable contribution of these waste pickers.

This extremely unorganised sector needs no skill and around 5,00,000 people in Delhi depend on it. The number of people engaged nationally in waste picking ranges between 15,00,000 to 40,00,000. They deal with 62 million tonnes of waste generated annually and recover 56% of India’s recyclable waste.

The study on waste pickers

A recent investigation of waste pickers in urban jhuggi jhopri (slum) clusters and resettlement colonies in five districts of Delhi throws up worrying results. The study, conducted by Action India, a Delhi-based NGO and supported by WaterAid India, a safe water charity, covers a little over 2000 households of extremely poor and illiterate rural immigrants who have no access to social or physical infrastructure like basic sanitation, water and power supply. Nearly half of the household members are engaged in waste picking. These informal workers who make a living by rummaging through refuse in the streets and dumps are from the localities of Kalyanpuri, New Seemapuri, Shastri Park, Usmanpur, Bhalaswa, Jahangirpuri, Mansarovar Park and Tughlakabad. Many children begin collecting materials to recycle at the young age of five to eight years.

The study shows that 46.73% of the waste-picker households are slum owners, 52.13% live in rented accommodation and 1.14% reside in shelter homes and other places. More than half (51.64%) of the waste picking households have been residing in the area for less than 15 years. These informal workers collect recyclable materials to earn small wages on a daily basis. A majority (60.54%) of them earn below Rs 200 a day; 30.86% earn between Rs 200-500 a day while just 8.61% earn over Rs 500 a day through waste picking.

Most waste pickers are at a risk of catching diseases from toxic rubbish. Awareness of various occupational and environmental health hazards among them is low and over 50% of them suffer from one or the other disease due to poverty on one hand and the hazards of the occupation on the other, the study reveals.

The sector, growing at a fast pace, deals with solid, sewage, hazardous, wet, medical or even electronic waste and is not known to enforce environmental regulations. Dumps can promote infectious diseases, attract flies, rats and other vectors apart from being prone to fire hazard. Waste pickers provide services that benefit the environment yet face harrowing occupational hazards and are exposed to toxins in the absence of protective gear. 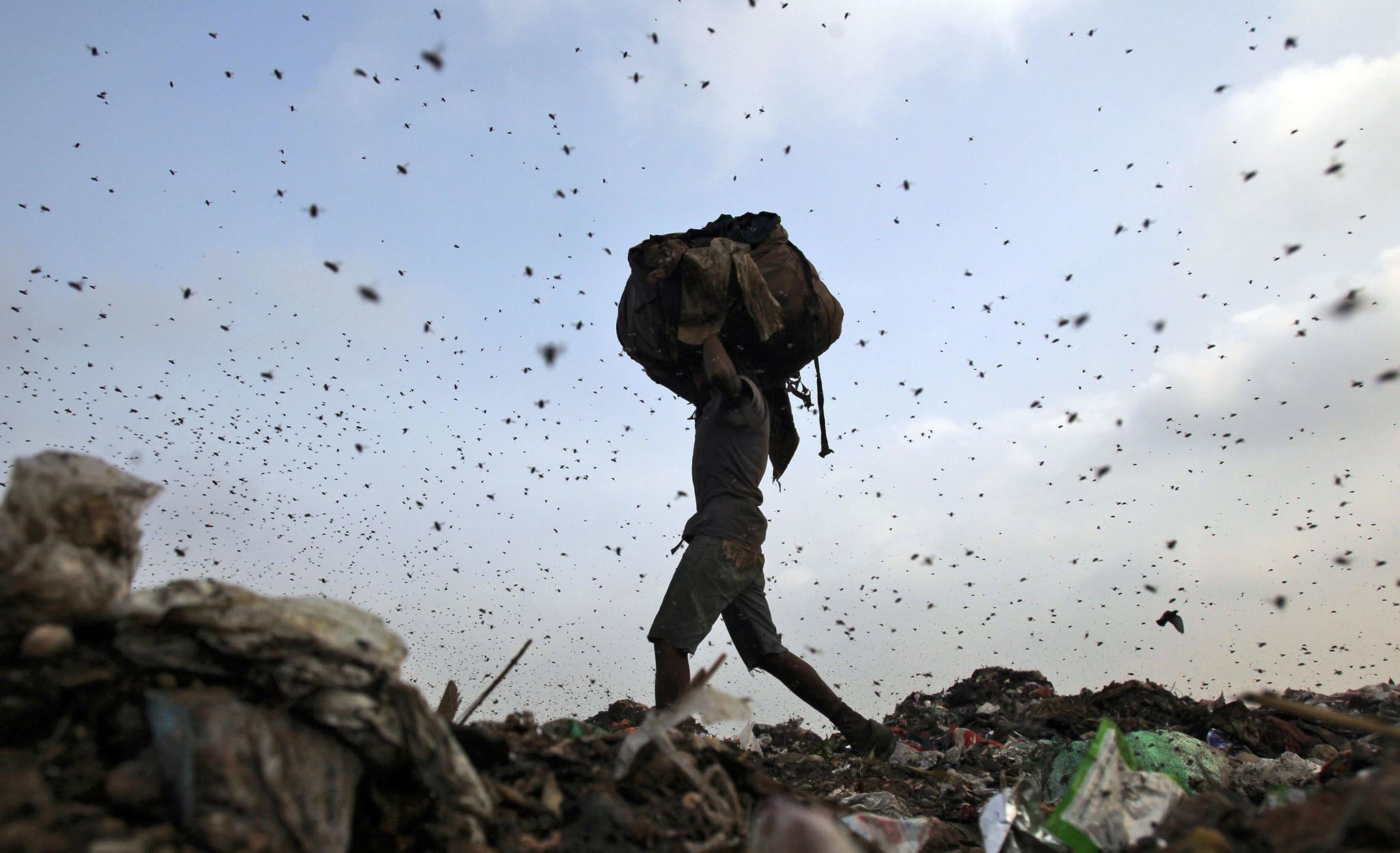 A waste picker collects, sorts and transports anything between 10-15 kg of waste a day in Delhi. Credit: Reuters/Anindito Mukherjee

Like other sectors in India, here too, waste pickers deal with the complex culture of the caste system. The collection of waste is largely done by Dalits and other lower-caste communities, who are amongst the most stigmatised populations in India. The children of waste pickers end up picking trash instead of being in schools.

A waste picker collects, sorts and transports anything between 10-15 kg of waste a day in Delhi and those in tricycle carts collect 50 kg a day. Their job is to collect and segregate household, commercial and industrial waste for processing in centres where it is sorted for composting, recycling or energy generation.

Child waste pickers are vulnerable given their poor knowledge and awareness regarding occupational and environmental hazards. Not only this, they often find themselves attacked by adult waste pickers who see them as a threat to their livelihoods. Not only do they work long hours for low wages but are also vulnerable to exploitation, child abuse and traffickers.

“Though the children get enrolled in school, they remain absent for long and subsequently drop out at the primary stage of education itself. They also face problems like exposure to alcohol, drugs and are often harassed by police and civic body officials,” says Rinku Singh of Action India.

Access to clean drinking water continues to be a problem and there is acute water shortage during summers. People resort to adding chlorine tablets in the water to keep their water clean. Tankers that are deployed to supply water to the community are inadequate and women and children have to walk some distance to fetch water from borewells. At times people are compelled to buy clean drinking water which increases the economic burden on them.

While the city struggles to deal with its waste, the livelihoods of waste pickers have been hit by the implementation of GST. After the GST implementation, many of them went out of employment or faced reduced incomes because 12% GST is levied from recyclable products like plastic, paper, glass, iron scrap, etc when dealers of scrap sell these to recycling units. They are left with less money to pass on to the waste pickers and the daily incomes have gone down significantly. There is a need to incentivise the sector as well as extend social protection to the waste pickers.

Waste-picking children are particularly vulnerable to exploitation. An effective and efficient solid waste management system is required to deal with the problems faced by child waste pickers. “In waste picking, there are no visible employers who can be held accountable for engaging children. The penalty under the law for continuous violation of the 1986 Act is not possible as a result. In such a situation, the community at large has an important role in mobilising public opinion against waste picking,” says Devendra Kumar Gupta, treasurer, Action India.

The general public should be made aware of the rights of children. “The problem of child labour and those of waste-picking children cannot be seen or solved in isolation. Issues like infant mortality, malnutrition, unemployment, bonded labour, lack of educational facilities, the explosion of population, pervasive poverty, and worker’s growing helplessness are all knotted threads in the web of the problem. A concerted and dynamic thrust is needed towards solving these problems,” says Gouri Choudhury, chairperson, Action India, Delhi.

“The task would be to improve the economic conditions of the households of these waste-picking children. The provision of assistance in the form of income-generating assets under different development and poverty eradication programmes needs to be provided to such families. It is important to create dignified livelihoods for rag pickers,” says Gupta.