The struggle for hospital beds and key medicines has persisted in the national capital. 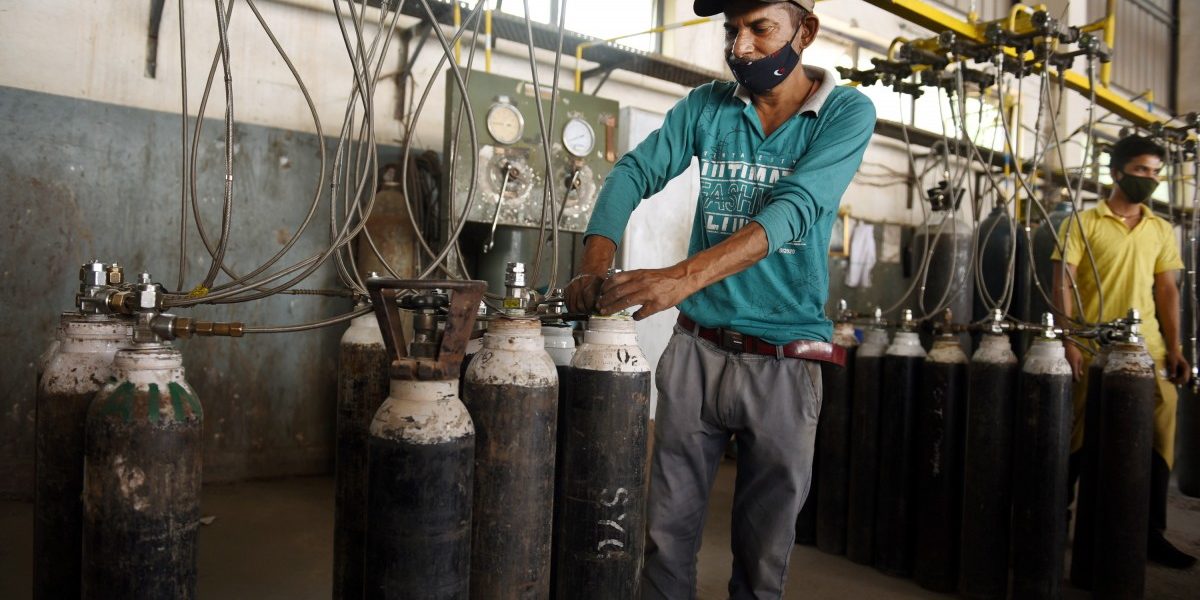 Family members of COVID-19 patients outside an oxygen-filling center to refill their empty cylinders, as demand for the gas rises due to spike in coronovirus cases, in New Delhi, Friday, April 23, 2021.

New Delhi: At a time when oxygen, medicines, injections and hospital beds for COVID-19 patients have grown to be most the country’s primary concern, people living in the national capital, who had managed to get relatives admitted to Sir Ganga Ram Hospital had breathed easy.

Ganga Ram is one of the best equipped and staffed hospitals in the country. However, the death of 25 most severely ill patients at the hospital at a time of oxygen shortage has come as a reminder that this is a crisis that goes beyond faith in infrastructure.

The situation at the hospital remains precarious. The hospital, in the heart of Delhi and one which is preferred by many influential people, is run by a Trust comprising doctors.

On Saturday morning, the hospital has again urged an “urgent refill” of oxygen, saying it has only enough to last it another half an hour on low pressure.

At 10:02 pm on Saturday, the hospital spokesperson while giving the status of supply as of 9:20 am, wrote that while the daily consumption was 10,000 cubic metres, the hospital required a minimum of 11,000 cubic metres per day. The status report said the available total stock of liquid oxygen was 500 cubic metre which at 9:20 am was enough “only for 1 hour in low flow”.

The hospital is treating over 500 COVID-19 patients, with around 140 on high flow oxygen.

The hospital’s chairman D.S. Rana said that the hospital administration has been frantically making phone calls to ensure supply of oxygen.

“To run ventilators, oxygen reservoir should be 3000 cubic meters. We are getting supplies of 500 to 1500 cubic meters only. We have 516 covid patients, 129 in ICU and 29 patients on invasive ventilation. These 29 patients due to less supplies are on manual ventilation since midnight,” he said.

“We want help and I appeal to both centre and state to help. On one side they have increased COVID-19 beds and on the other side, they cannot supply oxygen in sufficient quantity. How are we supposed to work? If this is COVID tsunami and the government has invoked Disaster Act, then they should work according to Disaster Act. We need immediate intervention,” the chairman added.

On Friday, the hospital issued multiple urgent requests. While it received 2,000 cubic metres of oxygen at 9:20 am on Friday, it was only enough to last 4-5 hours.

By 11.24 am, the hospital, which still has 385 COVID-19 patients, had once again tweeted that it was left with just an hour’s worth of liquid medical oxygen supply with another two hours’ backup from cylinders.

At 8.47 pm, The Wire learned that the hospital had only “30 to 45 minutes” of oxygen left. A tanker arrived at 11 pm with enough oxygen to tide over patients for the next one and half hours, according to hospital authorities. “By that time, the truck from Inox [an industrial gases manufacturer] should be here,” the hospital’s public relations officer told The Wire. Family members of COVID-19 patients outside an oxygen-filling center to refill their empty cylinders, as demand for the gas rises due to spike in coronovirus cases, in New Delhi, Friday, April 23, 2021. Photo: PTI

The helplessness displayed by SGRH is echoed by numerous other hospitals across the Delhi and its satellite townships. The hospitals, especially the private ones, have been regularly issuing press notes to apprise authorities and police of the situation.

Meanwhile, Delhi’s nodal minister for COVID-19 management and deputy chief minister, Manish Sisodia, had yesterday cautioned that there was no supply of oxygen in six private hospitals. He had also demanded an increase in Delhi’s quota of oxygen from 378 metric tonnes per day to 700 metric tonnes. However, the Centre has only increased the Capital’s allocation to 480 metric tonnes.

In neighbouring Uttar Pradesh, hospitals are no better off. A day ago, Prakash Hospital, which has two facilities in Noida and Greater Noida, also made SOS calls as it was left with just 2-3 hours of oxygen. The hospital issued a press statement saying for the past few days it has been “facing serious difficulties in procuring adequate and regular supplies of oxygen.” It added that its “supplier Mr. Tarun Seth, who is situated in Faridabad has denied supply” citing the Haryana government order to prioritise the state, then Delhi and then send the remaining supply to Uttar Pradesh.

With 55 and 85 COVID-19 patients respectively in its Noida and Greater Noida premises, the hospital appealed to the “state and central government to help it procure adequate supplies of oxygen immediately to avert an imminent crisis.”

Other hospitals in the district like Kailash, which has four campuses catering to hundreds of COVID-19 patients have also been issuing regular statements on the paucity of oxygen. The hospital chain, owned by former Union minister and BJP MP Mahesh Sharma, had also cautioned that it was left with barely five hours of supply. In light of the shortage, the hospital had also stopped new admissions. Meanwhile, for thousands of COVID-19 patients, the struggle of getting tests done, finding Fabiflu or Remdesivir, or oxygen cylinders continued as with the surge in cases, the demand has been rising.

Amid an ongoing shortage of RT-PCR kits, people are finding it tough to get themselves tested. Samarth, a resident of Noida who has just recovered from COVID-19 said the waiting period for tests has gone up. “Earlier they would pick up the sample the same day and give the report the following day. Now they pick the sample the next day after the call and give the report only after three days,” he said.

Fabiflu tablets which are being prescribed by most doctors is hard to come by amidst speculation of hoarding. The same goes for oxygen cylinders and concentrators.

“Everyone wants to the prepared for an eventuality. How long can a person survive without oxygen support if the saturation dips and he does not get a hospital bed with oxygen,” said one Lalit Anand, a resident of east Delhi. However, even hoarding oxygen refills has reportedly proven to be difficult as many refill plants have also started running out of supplies.

The struggle for hospital beds continues. At GTB Hospital, Talika Gupta, who had come to get her relative admitted, said “My relative died without getting admission. But we’re not alone, there were at least 5-6 other patients who succumbed before my eyes as they waited for a bed on Wednesday evening.” Gupta, who was also asked by doctors to arrange for a Remdesivir injection for her relative, said, “We searched hard for it but could not get even a single dose.” 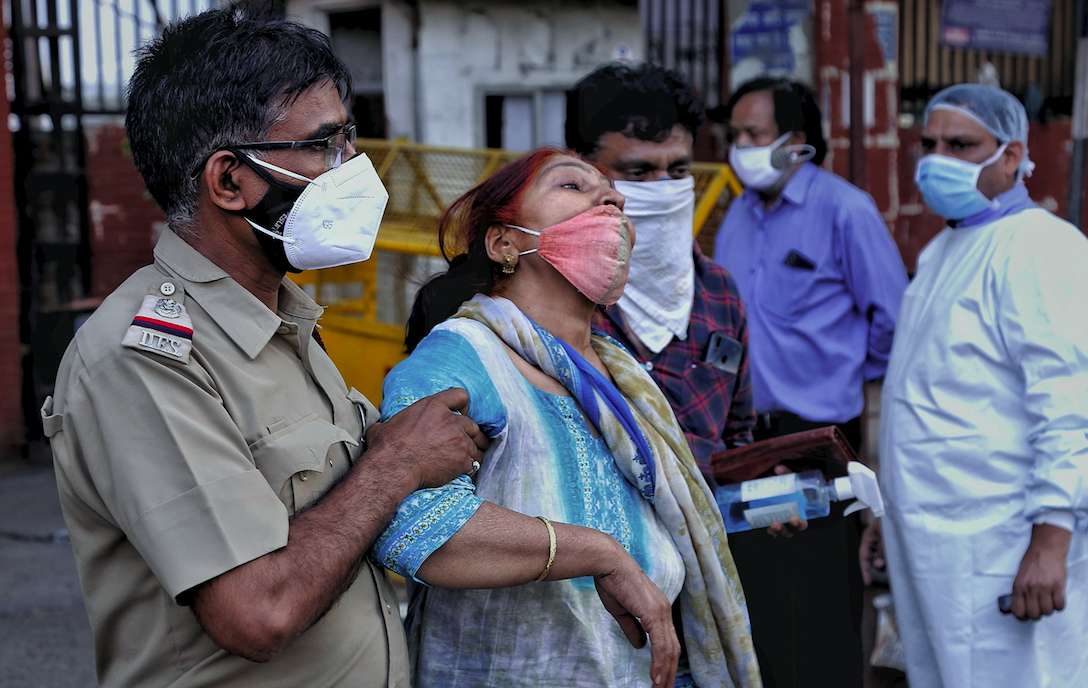 A Delhi Fire Service (DFS) personnel with a family member after his younger brother died due to COVID-19, at LNJP Hospital, in New Delhi, Friday, April 23, 2021. Photo: PTI

The relatives of Shashi Bhatnagar, a resident of Vasundhara in Ghaziabad, were also asked by doctors at Atlanta Hospital, where she was admitted to find at least two doses of Remdesivir. But she too died before they could find the drug as her oxygen saturation levels plummeted. A pharmacist of West Delhi, Ajay said, though some doctors have started prescribing alternatives for the drug, many hospitals are yet to agree to administering these.

Another issue facing many patients is that even if they get admission in a hospital, they do not get beds with pressurised oxygen or ICU facilities. A former journalist with The Hindu, admitted in a Noida hospital, has been waiting for such a bed for the last two days.

Note: This report is being updated as hospitals receive oxygen and other supplies.