Why Healthcare and Education in Rural Areas Should Be Prioritised Immediately

The state must allocate necessary funds in order to implement its most important commitments in all parts of the country. 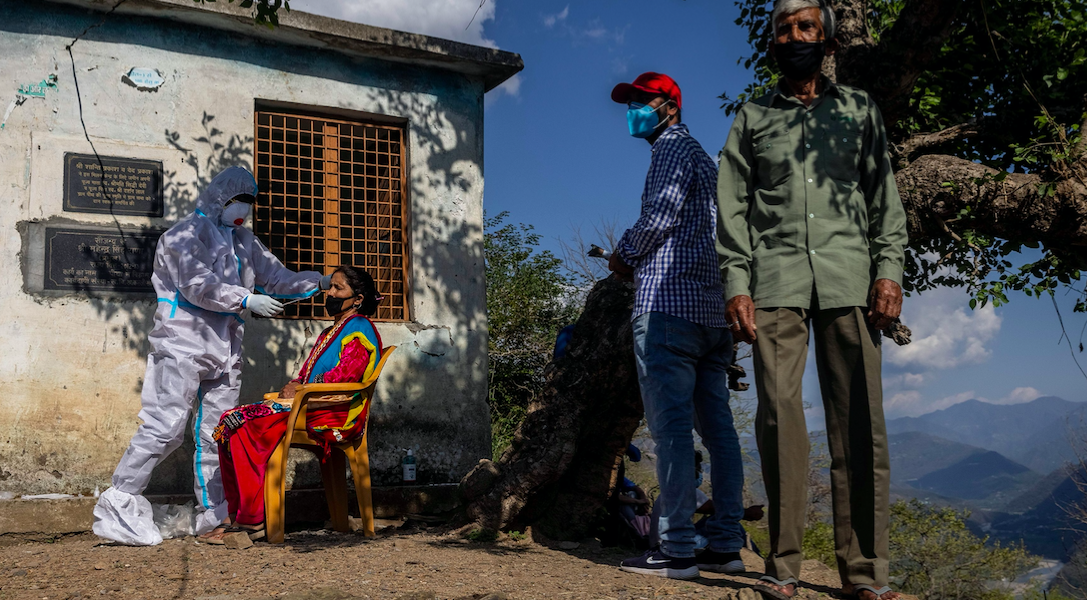 Healthcare workers at the remote Pitha village in the northern state of Uttarakhand, India, May 22, 2021. Photo: Reuters/Danish Siddiqui

This is the second in a three-part series on policy and development decisions that rural India needs in order to recover from the pandemic and its after-effects. Read part one here.

With the massive second pandemic wave it is clear that it is necessary for the government to focus on the enormous unprecedented unemployment that has been created in rural areas.

In addition to the large numbers of daily wage earners who returned with their families from cities during the first wave of the pandemic they also now include many who have lost salaried jobs. The Centre for Monitoring the Indian Economy (CMIE) reports that by the end of March 2021 over six million workers in rural areas lost their jobs.

Most of them have moved to farming, which means an increase of 9 million workers in farming – which will put considerable pressure on the agricultural sector. The CMIE report estimates that the present wave is likely to add to a total of well over 120 million job losses.

In response to migrant workers concerns, Niti Aayog has prepared an outline draft national policy. It advises that migration should be acknowledged as an integral part of development, and government policies should not hinder but seek to facilitate internal migration.

The policy suggests the creation of a database of workers in the informal economy, an increase in minimum wages, and increased employment creation in the rural areas to stem migration.

What is really needed is the creation of many more jobs in the rural areas. This may be difficult to do, but with an imaginative approach substantial change can be brought about over time. Instead of concentrating on short term jobs and cash handouts, the government needs to focus on training for long term change.

At present, no serious attention has been given to this fundamental commitment. Along with this, a process should be established to help returned migrants to set up their own business, based on their individual capabilities. Help may be both in the form of training in the skill institutes, along with financial aid as may be required.

Women can also be helped by setting up training institutes offering courses in healthcare, tailoring, processing fruits and food products, cooking, and other craft skills. Officers of the Rural Administrative cadre in league with the local panchayats need to chart out a plan of implementation to bring about gradual development and change which creates jobs for both men and women.

A serious issue in the development of rural areas is the provision of proper healthcare. Conditions vary in different regions and thus management of health care needs to be tailored in response to specific regions. During the first wave of the pandemic the health and welfare of women and children in the poorer section of society was directly affected.

Also read: Why and How India Needs to Develop Post-Pandemic Settlements

Large numbers of pregnant women who did not have access to proper medical help during childbirth lost their lives, and others gave birth to underweight and severely underweight children, subject to life-long health problems. The Indian healthcare system struggles in ordinary times. This suffering has been multiplied during the pandemic and has had a devastating impact on social and economic lives. 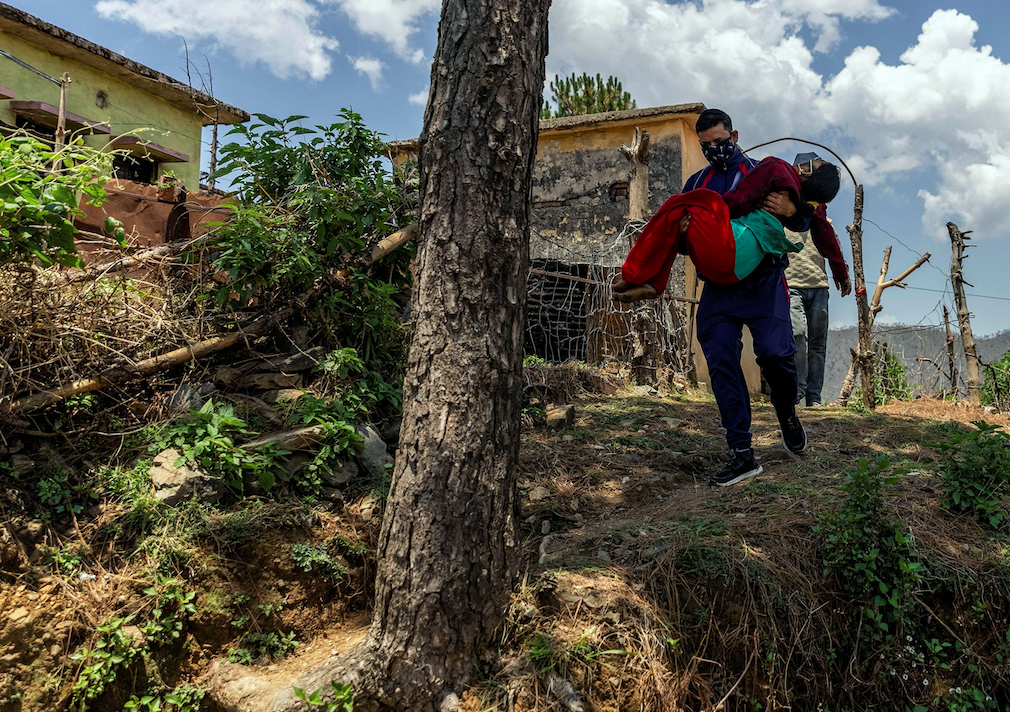 Pramila Devi, 36, who is suffering from the coronavirus disease (COVID-19), is carried by her nephew Rajesh Kumar, as he takes her to a local government dispensary, in Kaljikhal, in the northern state of Uttarakhand, India, May 23, 2021. Photo: Reuters/Danish Siddiqui

With the rapid spread of the pandemic, they are now faced with the additional problem of protecting the health of their families, at a vaccination cost that they cannot afford. The Prime Minister has flagrantly defaulted on the promise to provide a free vaccine to all citizens, and has simply passed on this responsibility to the states to do the needful at their own cost.

The government aims to put into operation over 1.5 lakh Health and Wellness Centres (HWCs) all over the country under the local district administrations to take care of healthcare on a comprehensive basis. This if properly managed would be a significant factor in addressing health and nutrition issues. However, to date nothing much has been done to implement this proposal on a national basis in all the states.

There are various ways in which healthcare can be regularly monitored. A good example was set up during the first wave in a remote district of Sahibganj in Jharkand where a District Grievance Redressal Cell (DGRC) was established chaired by the District Magistrate which met daily.

Within 24 hours of receiving a complaint the cell addressed bed availability, take home rations, ambulance services, shelter for migrants, and other issues. With a system of similar hubs linked across rural areas it would be possible to extend healthcare facilities to large numbers of the rural population.

The importance of the education of migrants’ children

As part of Niti Aayog’s draft national policy on migrant workers it has been proposed that the Ministry of Education take measures under the Right to Education Act 2009, to mainstream migrant children’s education, map migrant children, and provide local language teachers in migrant destinations. This expression of serious concern is unfortunately not backed up by a serious evaluation of how such proposals will be financed and implemented in the large number of backward states from where these migrants originate.

Also read: While Students Use Social Media to Speak to Power, Schools Tutor Them in Slavish Sycophancy

As a result of the pandemic the right to education of millions of children has been seriously disrupted. They were no longer in a position to take advantage of the constitutionally guaranteed free education for all children from the age of 6 to 14. In a system of education which was in any case minimal, the break of more than one year, which has now been further extended for an indefinite period, will have a serious impact. To date the government has not come up with any comprehensive or uniform reform in education governance to deal with this issue. 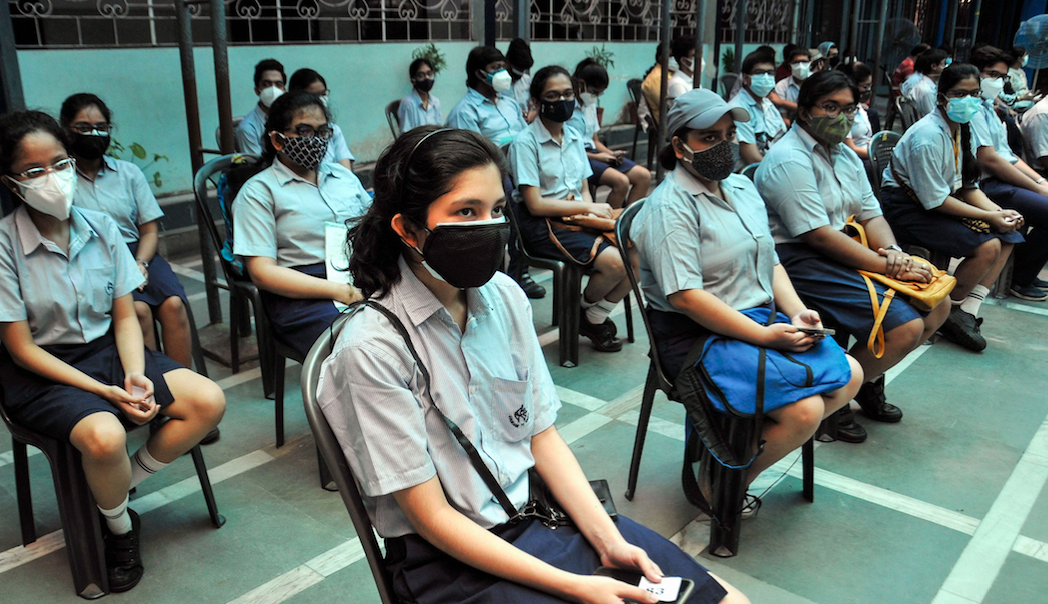 Article 21A of the constitution inserted in 2010 stated ‘the state shall provide free and compulsory education to children of the age of six to fourteen years in such a manner as the state may by law determine’. This Right to Education Act placed a positive obligation on the state to provide free elementary education to all children in the prescribed age group in the country. It directed the state to fulfil this by establishing and running schools within the vicinity of all eligible children, and prescribing minimum norms and standards for unaided private schools. Despite this, apart from simply shutting schools, over the last one year, no comprehensive or uniform reform in education governance has been introduced. Since March 2020 all schools across the country have been closed down. Schools were pushed to transition to online mode of video classes, virtual classrooms, and WhatsApp chat notice boards.

The 2018 National Sample Survey on Education in India indicates that 84% of teachers across the country face challenges in delivering digital education because of lack of IT training and inability to handle computers. In addition, only 23.8% households in the country have internet access, and only 10.7% have a computer.

As per a 2020 Niti Aayog report 13% of households were still not connected to the electricity grid. The alternative of online teaching is therefore accessible only by those who live in areas where there is electricity, and for those few families who can afford to buy a computer. Facts reveal that this constitutes less than 35% of rural families.

The Union Cabinet announced a National Education Policy in July 2020 outlining an ambitious vision for India’s new education system, but made no mention of the pandemic-induced school closures or how the state would facilitate online education for children. Without extending any government support to the problem of online learning, the state has simply exaggerated the problem of learning for children of poor families, and increased the digital education divide between socio-economic classes.

Also read: The National Education Policy Has a Grand Vision but Can’t See Its Own Feet

A small section of well-off children enrolled in expensive private schools with access to regular internet, gadgets technology, and other support systems can continue with their schooling, while the large majority without access to these facilities have had their ongoing education cut short. They have in fact been totally deprived of their Constitutional right to education. The fundamental right to education has now become dependent on one’s economic class and affordability.

The government needs to amend the Right to Education Act in its next parliamentary session to include online learning, and obligate the state to provide students with online learning resources, in order to fulfil its mandate of free and compulsory education. The state must allocate the necessary finance in order to implement this important commitment in all parts of the country. To date this problem has been totally ignored and has not been addressed.