COVID Crisis: A Personal Experience of Treatment in Lucknow

As the UP CM claims oxygen, drugs and beds are available, those on the ground watch relatives die for the lack of medicines and hospital facilities. 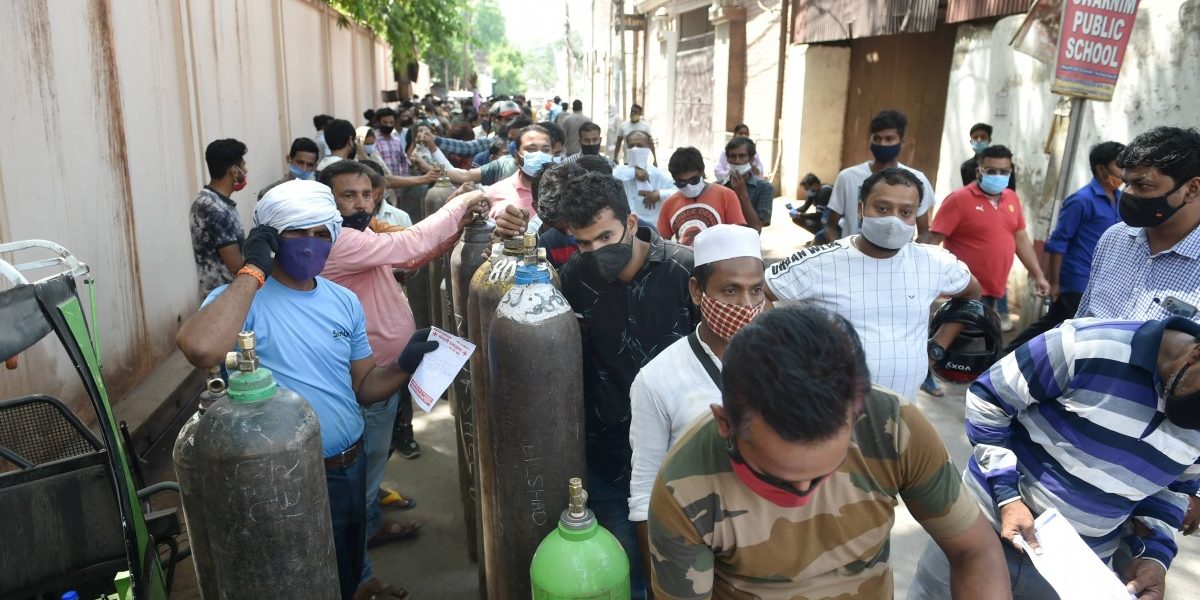 Family members of COVID-19 patients wait to fill their empty cylinders with medical oxygen outside an oxygen filling centre, as demand for the gas rises due to spike in coronavirus cases, in Lucknow, Friday, April 23, 2021. Photo: PTI/Nand Kumar

There is no better way to describe the situation faced by COVID-19 patients in Lucknow during this second wave of the pandemic than with the lyrics of the song All Izz Well from the 2009 film, 3 Idiots: “Murgi kya jaane ande ka kya hoga? Life milegi, ya tawe pe fry hoga (The hen does not know what will happen to her eggs: will the eggs hatch, or will they be fried in a pan)?”

The struggle starts the moment you get a fever and call the integrated control room to request a COVID-19 test. First you wait 20 to 25 minutes for the phone to be answered. Then, when someone finally picks up at the other end, you get little time to speak.

“Aapka test hua hai? Nahin hua hai? Pehle kariye phir baat karega (Have you had the test? No? First take the test, then call us),” they shoot at you and immediately hang up.

Five people in my home were affected by the virus – my mother, my sister-in-law, a nephew, a niece and above all, Lokkhi didi.

I had been in the fifth standard when Lokkhi di arrived to help my working mother with household chores. She had been supposed to stay only for a couple of months, but never went back. Within a few days, she had become an essential part of the family and the soul of our home.

COVID struck us all on April 6 as it had ruthlessly done with countless families in Uttar Pradesh. Each one of us suffered fever, coughs and colds. But though we all recovered, Lokkhi di did not. Her situation became critical, with falling oxygen levels and acute chest congestion.

Frantic, I called almost every source I knew for an oxygen cylinder. No phones were answered. I called the doctors I knew well, the bureaucrats and political leaders. No one answered their phone. Finally, a relative who had a small cylinder of oxygen for emergencies shared it with us. This gave us three hours to arrange for more oxygen as doctors attended to Lokkhi di at home and I managed to procure a 10-litre cylinder of oxygen, though it needed constant refilling. By 2 am, the cylinder was completely empty.

The nearest refilling station was at Nadarganj, about 15 to 20 km from my house. When I arrived there, I saw heartrending scenes. An old man was crying; his 40-year-old son desperately needed oxygen. A 25-year-old woman was begging for oxygen; both her parents were unable to breathe. Other people at the refilling station had similar stories. None of them could take their relatives to hospitals: no beds were available. All they could do was monitor the patients with pulse oximeters and give them oxygen at home.

To attempt to get a COVID-19 test in Lucknow is to enter a state of chaos. Private laboratories cannot conduct tests. Only government hospitals can. In any case, many people are already sick – entire families are sick – and unable to leave home for a test. But even those well enough go to the government hospitals have to fill forms, plead, persuade the staff before the test can be conducted. Apparently the UP government is now considering allowing private laboratories to conduct the tests.

Also read: A Doctor’s Plea: Forget For Once ‘Your’ Political Image and Give Our Patients What They Need

If you manage to get a test, well done! But God forbid that you test positive because that will be the beginning of your end. The allocation of a bed at a hospital depends on who recommends it. Unless the person doing the recommending is the state’s chief secretary or a BJP office bearer, you will not get a bed at any government hospital. But even if you know people in high places and manage to get a bed at a private hospital, do not get excited. You may have a bed, but you don’t have a BiPAP machine (non-invasive ventilator), which could be vital at this juncture. The doctors will tell you, “Please be prepared for any eventuality. Hamare paas ventilator nahin hai (We do not have a ventilator).”

This is in stark contrast to Uttar Pradesh Chief Minister Yogi Adityanath’s claim that that the state has enough oxygen and that the number of hospital beds for patients of COVID has been increased. If his claim is a fact and beds and ventilators are available, no one knows this, because getting into a hospital is a huge task in itself. The frontline health workers may be gods at this point, but they are also ruthless, rude and choosy about who to treat.

The nearest government hospital has an elaborate COVID ward, but it will not admit you. They will not even talk to you because you have no referral from the hospital’s chief medical officer (CMO). Without a referral from the CMO, your test and recommendation are useless. So the only option is a private hospital. The private hospital, however small it is, is a money depositing machine. So be prepared. However, on Friday, April 23, after countless lives were lost, the government very kindly decided to allow patients to be admitted in government hospitals without the CMO’s referral.

I constantly surf the internet to read what the UP chief minister has to say about Lucknow’s preparedness for the second wave of the pandemic. Based on what I have figured out so far, the chief minister believes that all is well, although a little more is required, which the Central government has kindly facilitated by diverting funds to the state.

But everything I have described above is from my own experience. I watched a close relative die due to the lack of medicines and hospital facilities. My brush with COVID-19 is therefore tragic. And it raises questions about the tall claims that the UP government makes on a daily basis.

Getting a hospital bed was a herculean task. We managed to admit Lokkhi di in a private hospital at 9 pm on April 18. There was no ventilator, so they gave her oxygen. The doctors constantly told us, “She needs a ventilator, but we have none. So anything can happen at any moment and don’t come back to us with questions and arguments.”

As the night passed, Lokkhi di’s condition worsened. I continued to request the doctors on duty to do something about it. At noon the following day, after many requests, a BiPAP machine arrived for Lokkhi di and the doctors used injectable drugs. But Lokkhi di had massive chest congestion and we were informed that the doctors couldn’t help her. “Please take her to a COVID hospital,” they told us.

There was no way to get Lokkhi di a bed at a COVID hospital and I said so, begging them to do something to help her recover.

“We can do nothing. She is in a critical condition. Please do what you have to do,” they said.

From then on, the doctors on duty took only a minimal interest in Lokkhi di’s condition. On Tuesday, April 20, I begged the owner of the hospital to administer the antiviral drug, Remdesivir, to Lokkhi di.

“In the first place, the drug is unavailable. On top of that, a dose that should cost Rs 1,500 is now selling for Rs 15,000. And on top of that, she will need to be kept in the intensive care unit for 10 days for the treatment to be effective. We cannot spare a bed in the ICU for so long,” the hospital owner said to me.

He asked me to come back after 10 minutes.

I went to the ward to check on Lokkhi di. She was not moving. It appeared there was no life left in her body. I went to the duty doctors. After I asked them twice to check, they did me that honour and informed me that she had left this mortal world.

“She was a COVID patient, so there is a protocol to be followed,” the doctors then said. “Do you want us to hand over the body to you or will you leave it to us?”

Shattered, I asked what the difference was. The doctors said, “You can take the body after an undertaking to us that you will cremate her with the COVID protocols. Otherwise, she will remain here until the Lucknow Nagar Nigam officials arrive.”

I handed over an undertaking and called for an ambulance. They quoted a huge amount but by now I had no strength to negotiate. I went to five shops before I could get a body bag (which now costs Rs 2,000 upwards) and two sets of PPE kits (now priced at Rs 1,100 each) for the ward boys and at last Lokkhi di was placed in the ambulance for her final journey.

As I stood at the crematorium at a distance, watching Lokkhi di’s body being taken to a place I was not allowed to enter, I received a phone call.

“This is the integrated control command centre for COVID,” said the person who called. “We were just informed that you have a COVID positive patient.”