COVID-19: Which Curve is India Flattening – New Cases? Or Tests for the Disease?

The answer is both, and that's not good news but bad. 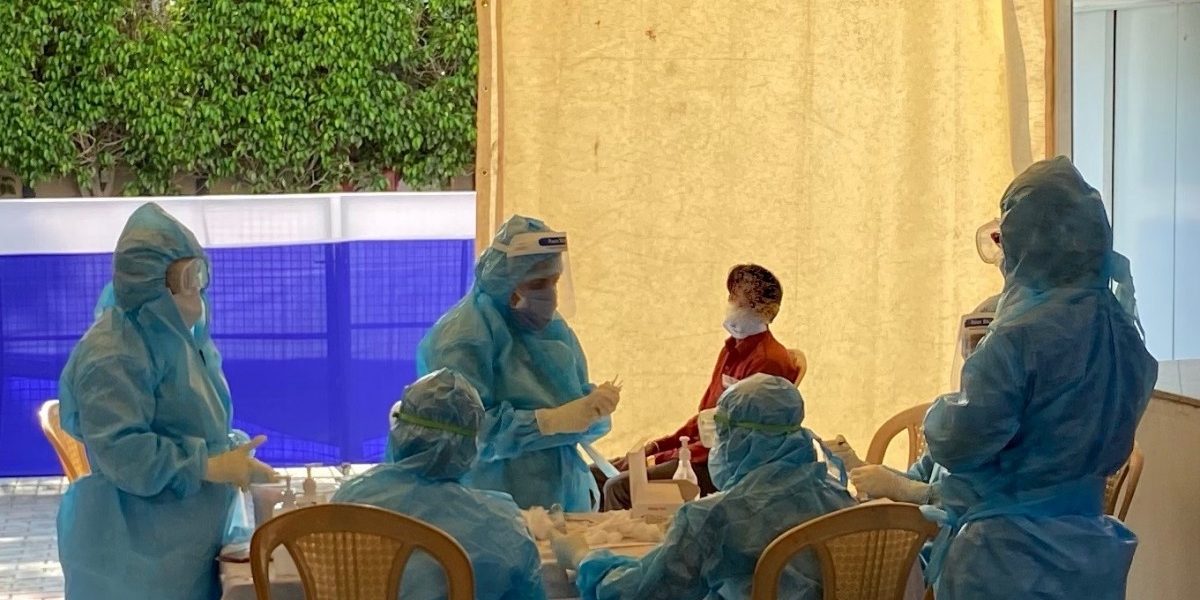 A person getting tested for COVID-19 in Delhi. Photo: The Wire

New Delhi: The growth rate of new coronavirus cases in India is now doubling every 12 days, according to announcements by government officials, who see this as a sign that the lockdown-based strategy of containment  is working.

But as India moves into its third lockdown, a closer look at the publicised numbers tells a different story.

For example, the Union health ministry said last week that the doubling time of cases in Assam, Telangana  and Himachal Pradesh, among other states, was much better than the national average – at 59, 70.8 and 191.6 days, respectively.

However, testing rates have also been dropping. The testing rate is the number of tests as a percentage of a country’s population. “The curve will flatten as you reduce testing,” Dr Jacob Puliyel, former member of the National Technical Advisory Group on Immunisation, told The Wire. “The less you test, the lower the numbers and the flatter the curve.”

Prashant Kishor, who was a public health expert at the UN before he became a political strategist, tweeted on April 26, “For all the technical jargon and interpretation of data, the hard fact is the rate of growth of [coronavirus] cases in India has seemingly slowed because the rate at which we were testing is now half of what it used to be in early April.” According to Kishor’s analysis of health ministry data and figures publicised by the Indian Council of Medical Research (ICMR), by March 30, the number of tests had increased by 68% over a five-day period. In the five days  after March 30, it increased by 108% – indicating an increase in the pace of testing. However, by April 9, the number of tests had only increased by 81% – indicating the rate of conducting new tests was slowing. It’s around this time that the curve of new COVID-19 cases also purportedly began to flatten. By April 14, the testing growth rate had further dropped to 69% and then to 57% by April 19.

When the government tests less and less, another way to understand the virus’s spread is through the percentage of people tested who come up positive. This figure, which stood at 1.33% on March 20 when India had not conducted many tests, shot up to 4.59% by April 19, when the total number of tests had also increased. But even here, official spokesperson are trying to spot a silver lining.

Last week, NITI Aayog CEO Amitabh Kant tweeted that India has one of the lowest rates of positive case detection. “It’s only 3.4% despite ramping up testing. It was 4.7% on April 15. In the USA, this figure is 17%.” 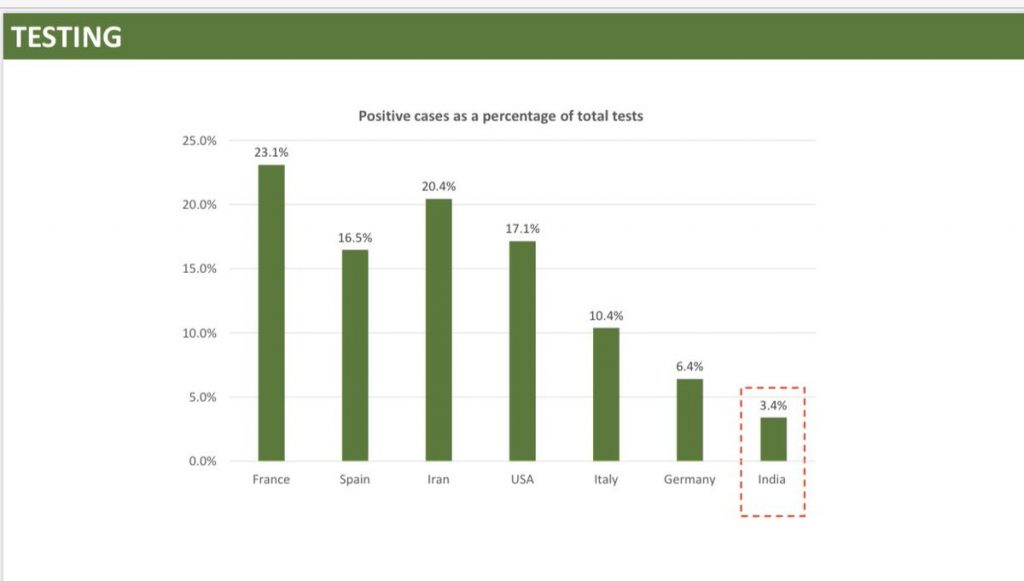 However, Kant glosses over the fact that India is also testing a much smaller proportion of its population than those countries are.

Another indicator of the virus’s spread is the fatality rate, defined as the percentage of the total number of  infected persons who eventually die. Kant said in a tweet that India’s share in deaths around the world due to the virus stood at 0.5%. 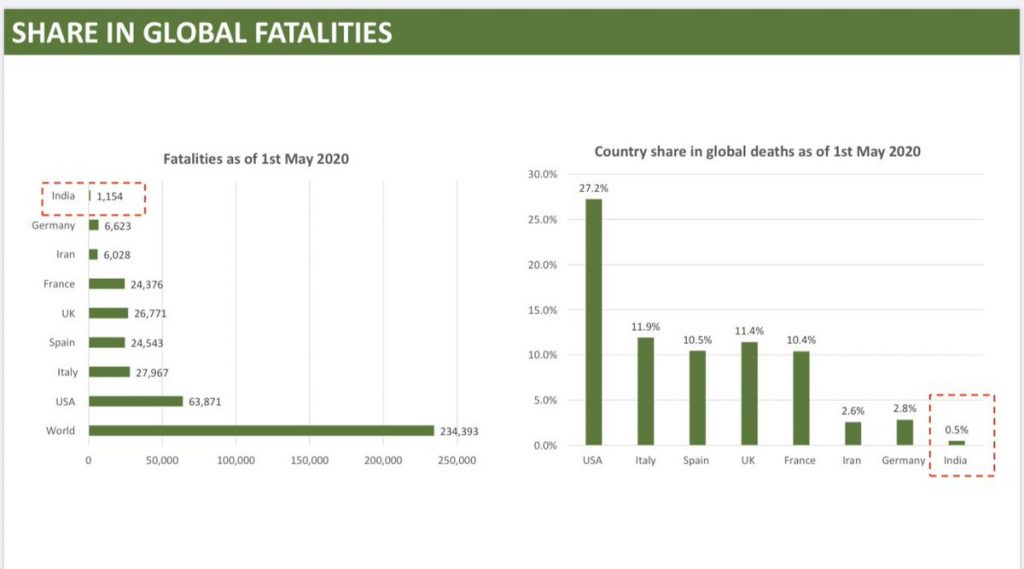 For some reason, Kant doesn’t mention the fatality rate, only the global share of fatalities. But on May 1, data from John Hopkins University placed India’s fatality rate – the number of deaths either per 100 confirmed cases – at 3.3%. This is much lower than every Western country, including Germany, which stands at 4.1%. But is higher when compared to our South Asian neighbours, Pakistan (2.3%) and Bangladesh (2.1%).

In another tweet, Kishor calculated that “the total number of tests” conducted between March 20 and April 29 had cumulatively increased by 53-times (despite the successive week-on-week drop in growth rates in between) while the number of positives jumped 172-times and the number of deaths, 268-times. Ritu Priya, a professor at the Centre for Social Medicine and Community Health at Jawaharlal Nehru University, Delhi, is even more skeptical than Kishor. Speaking to The Wire, she called the government’s data “meaningless”. “Whom are we testing and why? Is it for purposes of diagnosis or is it for surveillance?”

She added that tests should be conducted for surveillance, by picking up samples in a zone-wise manner. “Now, the private sector [is] conducting walk-in tests and that data is going into the main data bank. This is muddling up the numbers. Anyone anxious about their health is going in for a test.”

This could explain why, from April 24, the percentage of positive cases dropped marginally, from a peak of 4.59% on April 19 to 4.29% on April 29. The government allowed private labs to test for COVID-19 from April 4.

The worry now is that community transmission could well and truly be underway. A team of scientists at ICMR indicated in a study published in early April that of 102 patients with COVID-19 they studied, “over 39% did not report any history of international travel, 2% reported a contact with a confirmed case and 1% reported a recent exposure of international travel. Data on exposure history was not available for 57.8% of cases.”