What Rebuttals to The Lancet's Editorial on India Got Wrong

BJP leaders are keen to focus on these rebuttals, but they are all flawed. 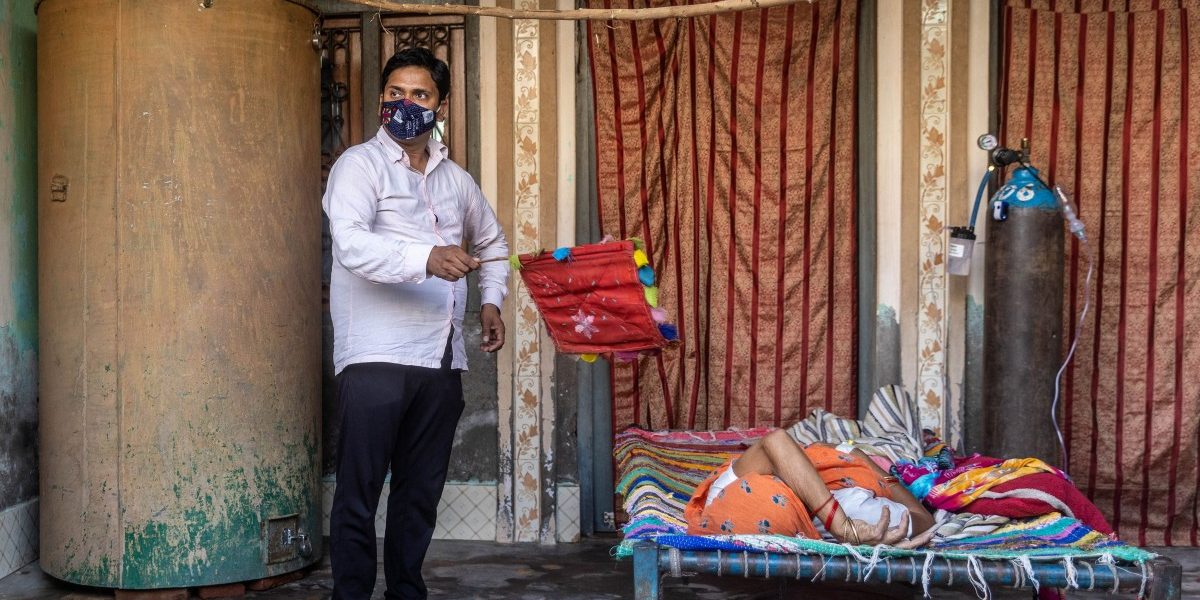 A man fans his mother as she rests in a cot while receiving oxygen support in Mewla Gopalgarh village, Jewar, Uttar Pradesh, May 15, 2021. Photo: Reuters/Danish Siddiqui

On May 8, 2021, The Lancet medical journal published an editorial criticising India’s response to its national COVID-19 outbreak. The journal’s words were in line with many other critiques that had been published in Indian newspapers and magazines until then, but it elicited a more bristling response than any of the others.

As if the slight couldn’t go unanswered, many ministers and leaders of the Bharatiya Janata Party soon began sharing the link to a blog post, led by Union health minister Harsh Vardhan. The post was authored by Pankaj Chaturvedi, deputy director of the Center for Cancer Epidemiology, Tata Memorial Centre, Mumbai, and published on May 17. Vardhan hailed its contents as “fair”, while calling The Lancet “imbalanced” and politically biased.

Three other sets of authors published rejoinders to the editorial. Two – by Kapesh Gajiwala (Mumbai) and Vasantha Kamath (Karnataka) – haven’t been published in scientific journals. A third one is due to be published in a journal, and the authors preferred not identifying it until then.

The bulk of the arguments in all four response are mistaken, however. Let’s see how.

Claim: “India’s population is greater than the population of the USA, Europe and Brazil combined. Even today, the number of deaths per million population in India is less than 10% of that in the US, the UK and Brazil.”

Flaw: We can’t compare the COVID-19 case and death numbers of India and other countries. In India, cases have been underreported in two ways: under-testing due to lack of infrastructure and lapses at the governmental level. We can’t compare the number of deaths, again for two reasons. Economically developed nations have a greater fraction of people older than 65 years thanks to better health and sanitation facilities. They also suffer from more comorbidities, which contributes to the higher mortality.

In addition, the number of deaths has also been undercounted in India, attested to by courts and media reports. The Patna high court pointed out glaring issues with Bihar’s official COVID-19 data. “Between March 1, 2021, and May 10, 2021, the Gujarat government recorded only 4,218 deaths from COVID-19, but 1.23 lakh death certificates were issued in the state,” Hindustan Times reported.

(It’s also amusing that Indian leaders invoke ‘western nations’ only when they appear to be faring badly. If Vardhan and others continue to insist that “India is better than the US”, we should insist that our health budget be comparable as well. It’s nowhere close at the moment.)

Claim: Farmers’ protests are as responsible for India’s second wave as election rallies and the Kumbh Mela have been.

Flaw: The protests had at best two lakh people in attendance, predominantly from the country’s north. The Kumbh Mela was joined by 91 lakh people from around the country. The extent to which they may have been responsible for ‘seeding’ new cases is vastly different.

More importantly, by invoking the farmers’ protests, people opposed to The Lancet are ignoring the crux of the journal’s case. The protest was a spontaneous agitation against laws the government passed without any consultation. The Kumbh Mela and the election rallies were carefully planned over many months. The Centre or the Election Commission could have called them off. Neither did, at least not before quite a few “super-spreader” events had taken place. The Kumbh Mela in particular was originally scheduled for 2022, but the national BJP leadership advanced it by a year on the word of astrologers.

Claim: Reporting stokes fear in the minds of the people, prompting them to hoard medicines and oxygen equipment, in turn creating a black market for these supplies. Media reports also encourage people to over-diagnose themselves with symptoms.

Flaw: Black-marketing happens when the business model is to take advantage of fear, not out of fear. Cut down on the fear and confusion, rationalise treatment protocols and regulate the price and distribution of drugs, and the black market will vanish.

Second, the idea that people crowd hospital facilities “for the slightest of symptoms” is an exaggeration that conveniently serves to hide the fact that hospitals are crowded with people who really need specialised medical care. Most people don’t get admitted to hospitals without consulting with a doctor first, and it is fair to assume doctors act in good faith, recommending people with mild COVID-19 to quarantine themselves at home.

In addition, we know thanks to news reports – and other sources of information – that finding suitably equipped hospital beds is or has been very difficult in many parts of the country. We also know that rural India largely languishes in the country’s blindspot because of the few testing facilities and tertiary care centres in villages.

Flaw: This hangs on the assumption that people can’t opt out of social media and that they are being forced to see such stories, or that they don’t know better. Neither position is true and are in fact demeaning. Most social media users consume what they wish to consume.

In addition, news publications have started to include content warnings on their articles and social media posts to warn readers and viewers about their potentially disturbing contents, and so that the latter may make informed decisions about how to proceed.

Flaw: As deaths due to COVID-19 surged in New York last year, Reuters, Washington Post, CNN, New York Times, BBC and The Telegraph telecast drone footage of caskets being buried in mass graves. There were similar reports from graveyards in Brazil, Italy and the UK.

People who are not journalists lack the agency as well as the means with which to ascertain if they are as informed as they ought to be, and if they are not, to find what is being hidden from them. Journalists thus play an important role here, making sure the citizenry is informed, empowered and in full view of their entitlements.

Claim: The Lancet ignored India’s generosity when it exported 66 million doses of COVID-19 vaccines in early 2021.

Flaw: It is not humanitarian to let a vaccine shortage, born of exporting too many doses and overestimating local vaccine-manufacturing capacity, affect a country’s own citizens.

The Government of India should by all means have anticipated the impending shortage and delayed exports until a significant fraction of those aged 18-44 years had been vaccinated. The government should also have placed advance purchase agreements with other vaccine-makers to diversify vaccine supplies within the country. Instead, the Centre claimed victory too soon and became complacent.

Claim: We are only able to criticise the government in hindsight.

Flaw: If this isn’t wrong, it is tautological. The Indian government was warned about not going ahead with the Kumbh Mela in March, about a deadly new variant of the novel coronavirus the same month, and about a potential medical oxygen shortage in by November 2020. The government ignored all these warnings, or did not take them sufficiently to heart. So what all the warnings had cautioned would come true came true.

If the government doesn’t want its mistakes to be called out, it should stop making mistakes.

Aakash Sethi is a final-year MBBS students at the Government Medical College, Baroda. He is active on Instagram here.