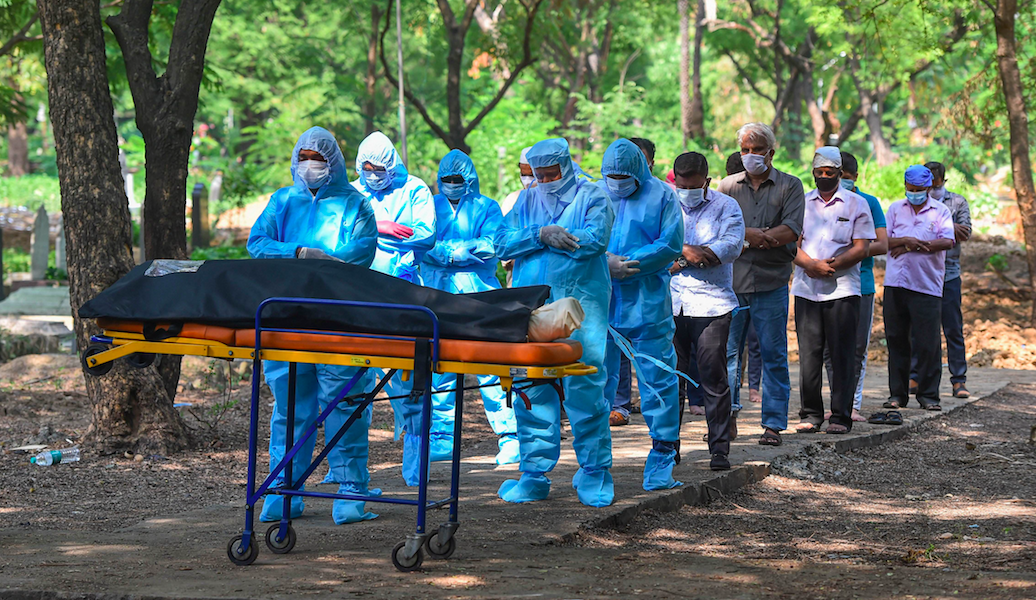 Volunteers wearing PPE kits perform prayers before burial of the body of a COVID-19 victim in Chennai, July 25, 2020. Photo: PTI

The number of recoveries stands at 8,85,576, according to the Union health ministry data.

There are 4,67,882 active cases of coronavirus infection at present in the country. Around 63.92% people have recovered so far. The total number of confirmed cases includes foreigners.

This is the fourth consecutive day when COVID-19 cases have increased by more than 45,000.

The number of tests for detection of COVID-19 has crossed the 16-million mark in the country. According to the ICMR, a cumulative total of 1,62,91,331 samples have been tested up to July 25 with 4,42,263 samples tested on Saturday, the highest in a day.

The COVID-19 tally in the national capital on Saturday mounted to over 1.29 lakh and the death toll climbed to 3,806, even as Chief Minister Arvind Kejriwal asserted that Delhi now stands at the eighth spot in the country in terms of active cases.

Sharing a list of states with active number of coronavirus cases on Twitter, he said the situation was “bad” a few days ago, and Delhi was at the second spot in it.

He also said despite the improvement there was “no room for complacency” and urged people to take precautions.

Punjab and Jammu and Kashmir have reported nine fatalities each followed by Madhya Pradesh with eight deaths, Haryana seven, Kerala five, Goa four, Chhattisgarh, Puducherry, Uttarakhand and Nagaland three each, while Assam and Ladakh have registered a fatality each. Brazilian President Jair Bolsonaro said on Saturday that he has tested negative for the novel coronavirus after weeks quarantined in his residence due to an infection.

In a photo posted to social media, Bolsonaro appeared with a box of hydroxychloroquine, an anti-malarial drug he credited for his recovery despite a lack of scientific evidence about its effectiveness. In an accompanying text, he said his RT-PCR test for Sars-Cov 2 was negative.

He did not say when he took the test nor did he provide any further details.

North Korea suspected to have got its first case

On Sunday, North Korean leader Kim Jong Un declared an emergency and a lockdown in a border town after a person suspected of being infected with the coronavirus returned from South Korea after illegally crossing the border.

If confirmed, it would be the first case officially acknowledged by North Korean authorities.

Kim convened an emergency politburo meeting in response to what he called a “critical situation in which the vicious virus could be said to have entered the country”, the North’s KCNA state news reported.