COVID-19 in India: It's Time to Leave the Tablighi Jamaat Incident Behind Us

From New Rochelle in the US to Mulhouse in France and Gangelt in Germany, large gatherings triggered the spread of the coronavirus. But only in India is the government still fixated on a single event. 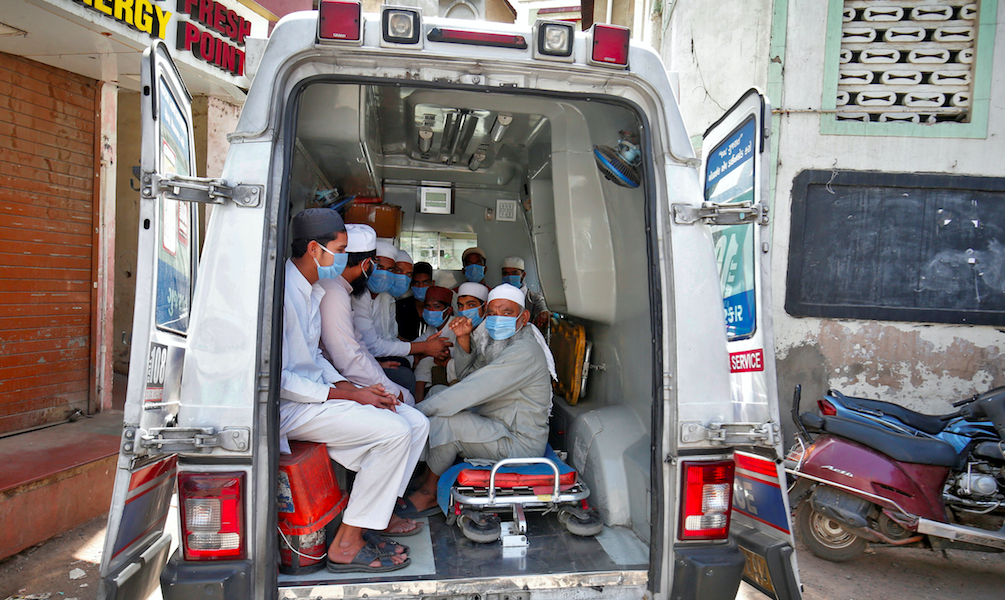 Men, who according to health and police officials had visited three Muslim missionary gatherings including in Nizamuddin area of New Delhi, wearing protective masks sit in an ambulance that will take them to a quarantine facility amid concerns about the spread of coronavirus disease (COVID-19), in Ahmedabad, India, April 3, 2020. Photo: Reuters/Amit Dave/

In his daily briefings, the health ministry spokesman – a joint secretary level officer – repeatedly underscores the fact that almost a third of all COVID-19 infected people in India have a connection to the Tablighi Jamaat congregation in Nizamuddin last month. The constant reiteration may perhaps be justified if the intent is merely to warn people of the dangers of clusters catching the contagion. However, the  public health costs of the resulting stigmatisation of the Jamaat – when amplified by the media and social media – could outweigh the benefits, if any, of this messaging. In any case, surely there are other far more important matters regarding the epidemic that need to be discussed or debated than repeatedly cataloguing the minutiae of this one incident.

Granted that the Tablighis flocking together was  irresponsible by any standards, it is time we moved on. There have been other clusters in the world, both religious and cultural, that have sparked super spreading of SARS-CoV-2 as well. But the affected countries have handled them in way that offer India vital lessons.

A synagogue in New York, but no stigmatisation of Jews

A classic example is the Young Israel synagogue in New Rochelle, a town north of New York city. The synagogue was ordered to be closed when it was realised that scores of people had become infected from it. A lawyer at the centre of the New Rochelle cluster was isolated, and more than 100 families that were exposed to him underwent quarantine. The containment zone beginning on March 12 , was a one mile radius around the synagogue. The lockdown lasted 14 days; schools and places of worship were closed and gatherings of more than 500 people banned, but neither were the streets closed or people prevented from leaving. Testing of people exposed to the lawyer was initiated. There were initially mixed responses from the city’s 80,000 residents but most sceptics later conceded the move was a good one.

The lawyer, Lawrence Garbuz, considered “Patient Zero” by New York governor Andrew Cuomo, became ill enough to be hospitalised. By the end of March, he was discharged. “I hope the Garbuz name becomes associated not as the ones with coronavirus but the ones who were instrumental in helping get this contained,” his wife wrote on her Facebook page.

The Lawrence Garbuz story is of vital importance in the vitiated atmosphere that prevails in India for the simple reason that there has been absolutely no stigmatisation of Jewish people in New York. On the contrary, the governor merely said, “Worship the way you can, but the gatherings are just not a good idea…  It’s hard. But on the flip side I say look at what happened in New Rochelle: Those gatherings that brought people together were religious gatherings and brought hundreds of people together, which was beautiful, but made a lot of people ill.”

Not once has Cuomo, a Catholic by faith, ever lamented , in his daily press briefings, the Jewish gathering in New Rochelle. Nor to their credit have the people of New York. It is still not known from where Garbuz caught the virus in the first place.

A church in France

Elsewhere, in Mulhouse, a small town in France bordering Germany, around 2,500 evangelical Christians had gathered in a church in February. One of the largest regional COVID-19 clusters was triggered by probably one infected church attendee. The French health system has been stretched to the limits grappling with the epidemic. The French health minister believes that the French epidemic was seeded by the Mulhouse prayer meeting. In the minister’s words “The epidemic spread across the country from the gathering.”

France had only 12 cases of COVID -19 on February 17, where the five day prayer meeting began at the evangelical church. Little attention was paid to scores of people developing mild flu like symptoms in the days after the religious congregation. The first patient to be diagnosed was a woman whose children had been at the church with their grandparents, although the woman did not attend it herself. Soon, the Porte Ouverte Christian church became a case study on the speed of SARS-CoV-2 transmission.

Representatives of the church are displeased at being blamed for what transpired because no distancing rules had been declared then. France today is under strict lockdown. The French government advised against gatherings during Easter, Passover and Ramadan.

Importantly, the French authorities have more important issues to tackle and so have moved on from the Mulhouse church incident. France has had more than 18,000 deaths; the average age of the infected is 62.5 years in France as opposed to 49 years in Germany. But neither the president of France, the health minister nor any French government official has chastised the Mulhouse church or sought to present data every day of how many infections emerged from it.

Lessons from a festival in Germany

Moving on to “Germany’s Wuhan” or the district of Heinsberg, in western Germany. A cultural gathering took place in mid February in the town of Gangelt; since then a lot of cases have been traced to the event. There have been deaths too; but the German government, instead of berating the participants of the cultural event, sprang into action. The entire town has been tested and it is now known that almost 15% of residents have antibodies to SARS-CoV-2. The Germans are already testing more than 120,000 people a day; in fact the Germans are doing what we are not.

Luckily their leader is a scientist who has gone about handling the situation in a pragmatic way. Angele Merkel’s popularity with the people is soaring because of her deft handling. For example, the city of Munich is going to test for antibodies in 3,000 families every month for a year. The aim is to figure out the number of people who have been infected, and thereby make policy decisions. Merkel wants to trace “every infection chain.” The aim is not to stigmatise or ostracise people but to look into the future, as the New York Times reports. German scientists rightly believe that measuring hidden infections and getting a true sense of the prevalence of the disease is key to loosening restrictions.

In contrast, the Indian health ministry provides the skimpiest information possible. From its website, we gather that as of now there are 13,295 active cases with 519 deaths; a crude fatality rate of almost 4%. There are graphs that give details of the number of cases statewise, as also deaths, but little else. It is imperative that the government provides more information than simply stating that 75% of the dead are over 60 years, and that 83% had co-morbidities.

There is, for example, no data on how did sex factor in deaths, the various co-morbidities, the number of patients attached to a ventilator, the treatment strategy or protocol, the use and identity of anti-virals administered, if any, whether patients are being recruited for clinical drug trials, whether any autopsies were conducted, are there lung biopsy reports, how many patients had multi organ involvement and if so which organs were involved. The list of queries can be long.

The ICMR has published a paper on its own website that records a 2% infectivity rate in more than 5000 patients of respiratory infection, but very little other information was provided. There is no mention of deaths in the infected group or the control patients.

The health ministry on its part should stay focused on the course of the virus by doing what the Germans and Americans are already doing – testing at least 100,000 people a day. American researchers are of the opinion that at least 500,000 people will need to be tested in a day before deciding on lifting tough social distancing restrictions. Also, by harping on the Tablighi numbers, the health ministry seems to be diverting attention from the fact that serological testing should have begun weeks if not months ago. By now, most if not all health workers, should have been tested for antibodies in order to get them back to work without fear.

Many infections, not so many deaths

Around 3000 Tablighis congregated in Delhi in March, which is almost a month ago. It can safely be presumed that each one of them infected at least 10 if not hundred people. If we have 30,000 infected people as a result, and use the conservative mortality rate of of 4%, then we should expect that at least 1200 people should have died by now. COVID-19 deaths in this cohort can’t be concealed because most of those who were in the Tablighi Markaz have been under surveillance. But the reality is that since mid-February, when the first few cases were detected in India, there have been 500 odd deaths. It is highly unlikely that the government is camouflaging the death rate. So while it is clear that there was a large congregation of Tablighis and many got infected, very few, mercifully, have perished. This in no way is an attempt to mitigate the recklessness of the congregation but a hint that we need to put the affair behind us.

India is confronted by a once-in-a-century pandemic, one under which the entire world is reeling. It is therefore incumbent upon us to cooperate with one another as never before. We do not have the luxury of promoting odious prejudices. Now is not the time for that. A catastrophe that can literally take us back decades is looming over all of us. We must employ all our intelligence, wisdom and pluck to navigate through this storm, for the sake of our children and ourselves.