COVID-19: Just What Is Happening in Delhi?

The current signs suggest that Delhi's fourth COVID-19 wave is going to have a high fatality rate. 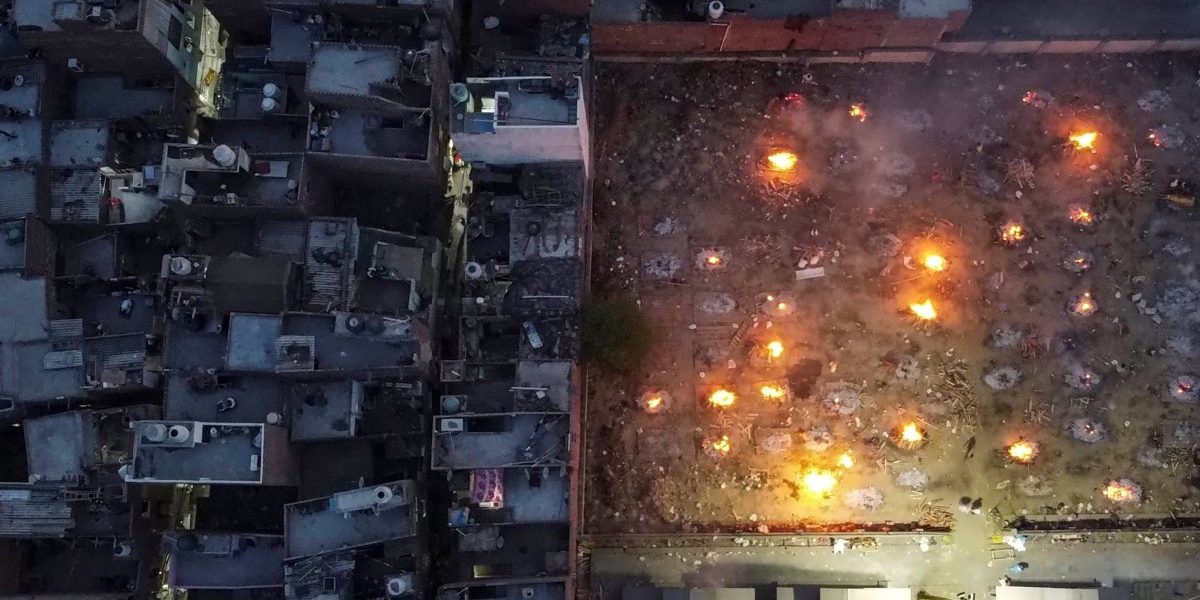 A mass cremation of victims who died due to the coronavirus disease (COVID-19), is seen at a crematorium ground in New Delhi, India, April 22, 2021. Picture taken with a drone. Photo: Reuters/Danish Siddiqui

This is a note on Delhi’s COVID-19 epidemic – to put the devastating current news in context. The desperate hunt for beds, the shortages of oxygen, almost 30,000 positive tests and over 250 recorded deaths in one day, with every third person tested being found positive.

This is Delhi’s fourth COVID-19 surge. It is overshadowing all the others. As in other cities, this tragedy comes when so many have already been infected. By January 2021, more than 50% of the city had been infected. This estimate is backed up by lots of data and analysis (references at the end). 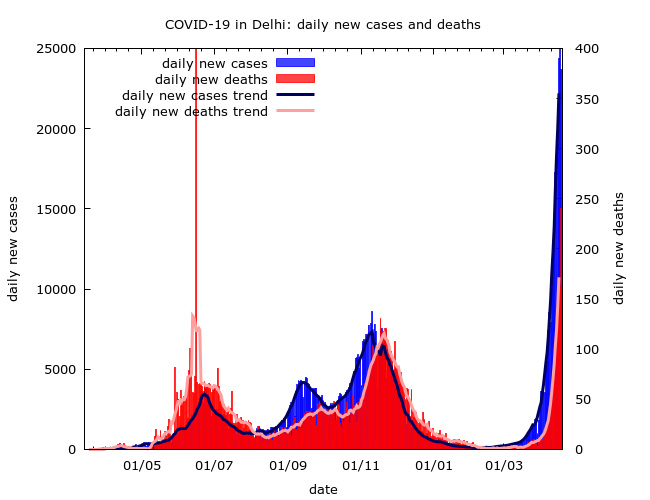 Prior to this wave, things seemed under control. By mid-February, with 60,000 daily tests, Delhi was finding only 100-150 cases. There were one or two daily deaths. This is unlike Mumbai, which was testing much less but reporting more infections and deaths even in the “calm period”.

The rise of this wave in Delhi was slow at first. The basic reproduction number (R0) actually crossed 1 in mid-February, but hovered below 1.5 until March 19 – by which time there were about 700 daily cases. Since April 5, it has been around 2. Deaths started a clear rise around March 19, and recently have shot up. 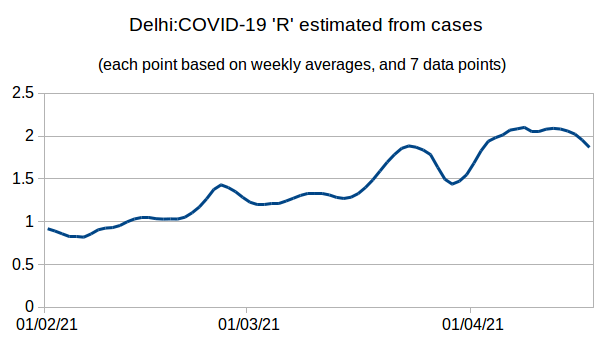 My latest estimates (from last year): about 1 in 10 infections were being picked up in testing. In the last week, there have been around 1.5 lakh cases – at a 10% detection rate, this would correspond to 1.5 million new infections (or 8% of the city’s population). The reality is almost certainly worse…

Delhi has always tested a lot – unlike Mumbai. But once you get the kind of test positivity you see now, it means detection has gone down. So it seems likely that in the last week, more than 10% of the city has been infected. This is shocking.

This is all particularly unbelievable given that more than half the city has already been infected. This brings us back to the question of which variants might be circulating in Delhi. Unfortunately, I can’t find any data on this; others will know more.

But we have to assume that whatever is circulating in Delhi is either extremely transmissible or fairly easily able to infect people who have previously been infected. In fact, with an R0 of around 2, it is hard to believe increased transmissibility is enough to explain the surge.

It is hard to know just how deadly this wave will be. Delhi’s fatality rate – in terms of recorded deaths – has been quite a lot lower than that of Mumbai, but it rose in the second half of 2020. Perhaps the virus was moving more in older populations.

The current signs suggest that this wave is going to have a high fatality rate. Even if deaths are only lagging one week behind cases, daily deaths could double and cross 500 a day. A tragedy is rapidly unfolding in the city.

References: Many estimates from last year in this technical document, including a median prior infection of 50% in the city in October 2020. This estimate was confirmed by a serosurvey in January 2021, which found 56% seroprevalence.

The author of this article originally published it as a Twitter thread; it has been compiled here with his permission. A more detailed analysis of Delhi’s current surge based on this thread appeared in Scroll.in.