The coronavirus pandemic affects everyone, but it doesn’t affect everyone equally. Working-class neighbourhoods have it much harder than wealthy enclaves – and that’s unconscionable. A man wearing a protective mask passes by a graffiti reading "Sneeze COVID-19" as a lockdown is imposed to slow down the coronavirus disease (COVID-19) spread in France, March 28, 2020. Photo: Reuters/Benoit Tessier

The Trump administration’s predictable mishandling of the COVID-19 pandemic and the scattershot congressional response both underscore and distract us from a larger problem: the policies and institutions that we count on to provide some semblance of economic security are fundamentally broken.The last few weeks have laid bare the stunning flaws of the American health-care system and public health infrastructure. They have reminded us how deeply we rely on basic public goods and services. They have demonstrated — in dramatic and terrifying ways — the fragility, the fragmentation, and the sheer inadequacy of the US welfare state.And they have shown that the costs of this economic and social disaster will be borne unevenly. “In societies where the virus hits,” the New York Times noted earlier this month, “it is deepening the consequences of inequality, pushing many of the burdens onto the losers of today’s polarised economies and labour markets.” Nowhere is that more true than in the United States.

The core inequality in our health-care system — that some are insured and some are not — makes it harder to stem the coronavirus contagion, dramatically raises the costs of any intervention, and ensures that the most susceptible are the least likely to get the care they need.

Every economic downturn exposes the folly of the United States’ employment-based, private health insurance system, which throws millions off their insurance coverage the moment they lose their jobs. Those consequences are even more pronounced in a recession accompanied (or precipitated) by a public health crisis.

Our crazy-quilt health-care system not only offers uneven coverage but squanders about a third of its resources (or up to a trillion dollars a year) to administer the distinction between the insured, the uninsured, and the underinsured. Let that sink in: the annual waste in our health system carries about the same price tag as the federal government’s first-round response to the COVID-19 crisis.

For those without job-based coverage, the Affordable Care Act and Medicaid expansion extend some peace of mind, and many states are considering bolstering these options. But the gaps remain wide. Fifteen states, nine of them in the South, still have not expanded Medicaid. So while the national uninsurance rate stands at about 10 percent, most of the uninsured are low-income working adults, almost half of them workers of colour in non-expansion states (see Figure 1). In other words, it is precisely those hardest hit by the coronavirus-induced collapse of the service economy that lack reliable access to health care. 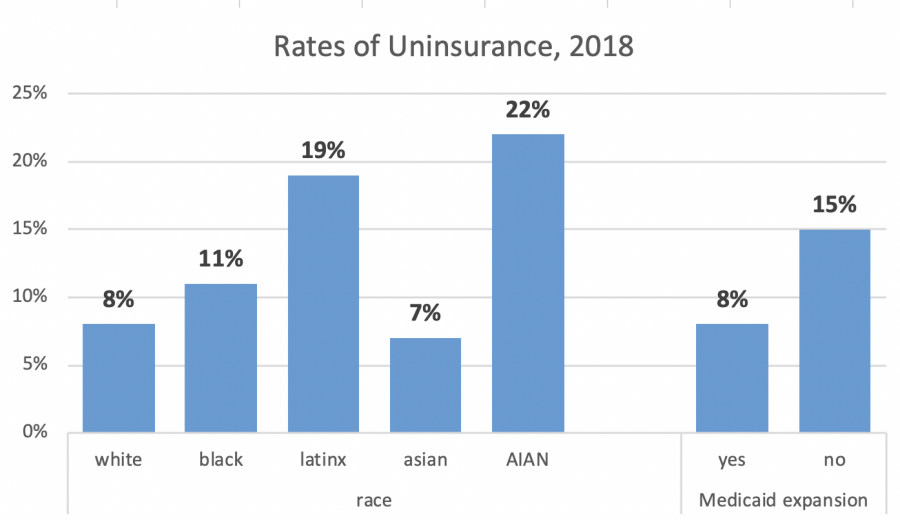 The COVID-19 threat is exacerbated by persistent disparities in health access and health outcomes. While most acute in the non-expansion states, they are by no means confined to the South. And inequality, quite simply, breeds vulnerability. One’s well-being is shaped not just by access to reliable care, but by a broad array of social determinants, including healthy food, clean water, recreation, functional neighbourhoods, and safe streets. Low-income workers are far more likely to suffer from preexisting conditions — such as respiratory illness — that amplify the risk of any public health crisis. And these risks are compounded — think of the impact of the last heat wave — by social isolation and the paucity of neighbourhood services.

The shuttering of basic public goods and services — especially schools — also threatens to deepen inequality stemming from the crisis.

American public schooling has reliably held out the promise of ameliorating background social and economic disparities, and just as reliably fallen short of that goal. The culprits here are familiar: a long history of school segregation (before and after the 1954 Brown v Board of Education decision), a reliance on local revenue that means struggling neighbourhoods are served by struggling schools, and the dramatically localised exercise of policy and discretion within schools and districts that distribute opportunities (such as advanced placement classes) and punitive measures (school suspensions) in starkly unequal ways.

Despite these shortcomings, public schools are critically important to working-class children and families. They provide not just educational opportunities, but essential social supports: before- and after-school programs, school-based health clinics, mental health services and emotional supports, and a reliable source of nutritious food. Indeed, the first priority in many districts as school buildings began to close was not how to maintain instruction but how to maintain access to school-based meals.

That’s not to say the interruption in instruction won’t be felt differently in tony suburbs than in working-class neighbourhoods. In some places, including Philadelphia and Seattle, K-12 school districts have directed teachers not to move to online classes, citing uneven access to computers and broadband internet. Well-heeled districts, meanwhile, are sending students home with laptops or tablets, and setting up Google classrooms.

Assuming that conventional K-12 instruction is on hold until at least the fall, there’s also the danger of an unequal summer slide (the academic ground lost from the end of one grade to the start of the next): In the summer following third grade, students fail to retain between 20% and 25% of their school-year advances in reading and math; in the summer after seventh grade, students drop between a third and a half of what they’ve gained. The impact, of course, varies considerably by socioeconomic status. Low-income children and their families have less capacity and opportunity to engage in out-of-school enrichment activities. And that chasm — driven largely by increased spending by high-income parents — has exploded over the last generation (see Figure 2). The absence of public schooling burdens low-income families more in the short run, and it widens the opportunity gap in the long run. Recessions always bear hardest on working families. Inequality widens because the economy sheds low-wage and marginal workers at higher rates, because barely a quarter of those laid off will ever see an unemployment check, because many states have dramatically pared back both the size and duration of unemployment benefits, and because widespread joblessness undermines bargaining power and wage growth for those who do stay employed.

The COVID-19 recession put all of that on steroids. This is not a slow contraction — it is a shutdown. The job losses are already staggering. In the first week of the COVID-19 recession, to cite but one example, initial weekly unemployment claims in Ohio skyrocketed from 7,051 a week to 78,000; new claims this week pushed past 3 million nationally — almost five times the previous weekly peak set in 1982. National job losses by summer, estimated at 14 million, will push the unemployment rate well above that seen in the depths of the Great Recession. And, to make matters worse, as Josh Bivens of the Economic Policy Institute notes, this recession is “laser-targeted at low-wage, low-productivity, and low-hours jobs in service industries.” 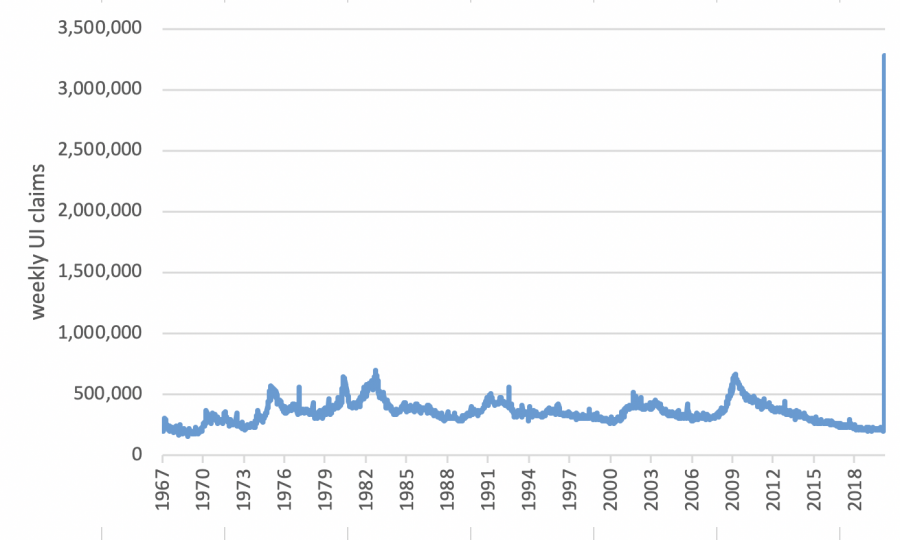 Service workers bear the burden of this recession in multiple ways: for one, they cannot work from home – a luxury enjoyed by two-thirds of workers in the top quarter of the earning distribution, but by fewer than one in ten in the bottom quarter. (A third of all white workers can clock in from home, but only one in five African-American workers and one in six Latino workers have that option.) This also means they face a much greater risk of unemployment as the service economy shuts down — and a heightened risk of exposure to the virus if they keep working.More broadly, the collapse of stable employment — and the scramble to patch together a response — exposes the ragged weakness of our safety net. The problem here is threefold: first, a generation of devolution in social policy has vested discretion and responsibility in state and local governments that lack the interest or capacity to respond to routine needs, let alone a crisis of this magnitude. As a result, the response to the COVID-19 crisis has been uneven and fragmented, and local and state governments (hamstrung by limited taxing capacity and balanced budget requirements) are at the mercy of federal aid.

Second, our social policies have dramatically narrowed the definition of the “deserving” poor in such a way that work or parenthood, or both, are prerequisites for state assistance. These are the baseline assumptions that leave so many slammed by the incipient recession (part-timers, the self-employed, gig workers) without anything to fall back on. And these are the baseline assumptions that, in the last GOP version of the congressional stimulus, would have excluded the poorest Americans (those without a tax bill to credit) from direct relief.

Finally, when pressed to look beyond these constraints and limits, the political class’s policy response has been to cobble together piecemeal and temporary fixes — an extension of existing programs, an easing of eligibility thresholds, a run of one-time payments or tax breaks — rather than acknowledging that the core programs themselves are woefully inadequate to the task.

The task ahead is daunting, in part because the trajectory and duration of the pandemic is still unknown, and in part because our policy capacity and infrastructure — even in these early weeks — is so clearly lacking. To meet this crisis both effectively and equitably, we need a short game and a long game. We must, of course, slow the spread of the virus — not just for public health reasons, but to buy some time to develop the novel policy responses needed to attack this crisis and prepare for the next one.

In the short run, we also need courageous and expansive federal action — buttressing consumption, backfilling state budgets, propping up key economic sectors, and assuming a wide array of economic risks. We need something at least on the order of the New Deal, with massive investments in public goods at the local, state, and national level.

The relief and recovery measures of the mid-1930s were quickly dwarfed by the progressive gains — collective bargaining rights, social insurance, robust financial regulation, progressive taxation — that sustained security beyond the horizons of the immediate crisis. By the same token, the real measure of our COVID-19 response will be in the long run — whether we emerge with equitable and universal access to health care, paid sick and family leave, expansive and generous social insurance programs, and well-funded public goods and services.

If COVID-19 is the inequality virus, we must attack it as such.

Colin Gordon is a professor of history at the University of Iowa and the author, most recently, of Citizen Brown: Race, Democracy, and Inequality in the St. Louis Suburbs.