In response to the insurmountable crisis, small grassroots organisations have taken up relief work and supplied ventilators and oxygen concentrators amidst the devastating second wave of COVID-19

India, in the throes of COVID-19 in 2021, resembled a scene out of an apocalyptic science fiction movie: a rapid rise of cases, SOS calls, an urgent need for oxygen cylinders and drugs in Indian cities amongst the rich and privileged, in a country where the poor anyway face multi-dimensional poverty: hunger, nutrition, housing, livelihoods.

A crisis in governance has marked India’s response to the scale and depth of the devastation. At this critical juncture, citizens have held the fort. Smaller efforts and initiatives, led by students, professionals, local activists and journalists have reached where the state and often, larger non-profits, have not. Often in response to hyperlocal needs, with a strong understanding of local context, such initiatives are known to be agile and adept. Such volunteers are the first ones you will call and yet they too are struggling to meet the needs of the people.

“This is rural Bihar, people here don’t even know they need oxygen when they are getting breathless, how do we even start helping such people,” said Delhi-based Shourya Roy, who was born and raised in Bihar, and is mobilising COVID-19 relief efforts to help those in rural Bihar through his initiative Jan Man People Foundation (JMPF).

For months now, he has been helping supply ration, oximeters, thermometers and roughly designed pamphlets with COVID-19 awareness information in rural languages to the suburbs of Delhi and Rural Bihar. With his three friends and no real capital or business plan, Shourya formed JMPF in 2014 but pivoted his efforts toward COVID-19 relief because he could no longer stand to see the helplessness on the ground.

Two hundred student volunteers, mostly from Bihar, have also since joined him in this initiative. JMPF is one of the many grassroots organisations that have taken up relief work in India amid the devastating second wave. In this article, we aim to highlight a few of these efforts and discuss how they are playing an important and erstwhile missing role in addressing the abject inequalities that have surfaced during the pandemic.

Also read: COVID-19 and Crimes Against Humanity: What the Nuremberg-Hague Trials Can Teach Us

While the first wave decimated the marginalised and their livelihood, with 230 million Indians sliding back into poverty, the second wave also deeply impacted the urban, the affluent and the privileged. The first wave was catastrophic for migrant workers and daily wage workers who struggled to access basic necessities like food and medicine.

However, the second wave’s narrative has been dominated by hospitals in major cities running out of oxygen, the shortage of hospital beds and ICU beds becoming almost impossible to access. What this has led to is a singular focus on the needs of the urban who have an increased share of social media space and because of their income, increased access to basic healthcare and socioeconomic amenities. It has become almost impossible for the existing government infrastructure to address this increasing burden and with a collapsing informal economy, the most marginalised have been further pushed into poverty and distress.

In response to these insurmountable needs, small citizen groups like JMPF are being formed across the country. Amir Siddiqui from Project Ummeed, another such initiative focusing on the supply of ventilators and oxygen concentrators to the hospitalised, said, “It is taking days for the upper-middle class educated folks to find hospital beds. So for a poor uneducated person with no smartphone and no WhatsApp groups there is no real solution”.

Amir is not wrong; the second wave saw Twitter appeals for pleas ranging from hospital beds to oxygen concentrators and even lifesaving drugs such as Remdesivir and Fabiflu. In a country where 65% of the population has no access to the internet and 58% does not have a smartphone, these options are far from viable.

With the COVID-19 caseload peaking in urban India, we have little data on the extent and spread of the infection in rural India. Horrific media reports reveal bodies abandoned in the river Ganges, mass cremations, stories of panic and despair as entire villages have reportedly been infected. According to estimates, 48% of the caseload is now in rural India – potentially affecting a much larger population, with Scheduled Castes and Scheduled Tribes at higher risk than ever before.

Adivasi Lives Matters, a platform intended to increase the share of marginalised tribal voices in storytelling, has pivoted to providing rations, emergency kits and vaccine awareness among 10 Particularly Vulnerable Tribal Groups (PVTGs) across Tripura, Chattisgarh, Tamil Nadu. Tribal groups face multi-dimensional challenges, which have worsened in the face of COVID-19. As Hamari of Adivasi Lives Matters explains, one PVTG in Tripura, the Reang community, had just been resettled from the rehabilitation camp they were living in after 23 years of displacement, when the second wave of COVID-19 hit. The entire settlement needs urgent subsistence and livelihoods support.

Also read: Why We Should Collectively Mourn the COVID Dead

Rural India has little health infrastructure support. In a bid to address this rural gap, Chandrajeet from Jan Stambh Foundation wants to set up 100 COVID-19 mobile kiosk for 100 villages in rural North India. He said, “these kiosks will carry oximeters, thermometers, basic drugs an oxygen cyclinder and other information to benefit villagers”. Such local efforts will be particularly important given the poor state of primary healthcare in rural India.

What all these efforts have in common is a strong foothold on the ground, access to areas that are either neglected by mainstream efforts or are just not reachable, and an extremely agile approach to helping the needy. As they were set up in reactive mode, many of these are not even registered efforts. Ankit Gupta who calls his initiative Kisse Kahaniyaa has been able to supply ration to over 5000 migrant workers. Kisse Kahaniya borrowed its name from Ankit’s personal Twitter handle and he uses his personal cellphone number to take plea calls, supported by 5–6 other volunteers.

Another important feature of these efforts is their hyperlocalised focus. Ankit told us that they only want to go to the jhugis or unregistered temporary slums, because this is where most migrant workers were staying, having no permanent address in urban India and therefore no legal access to basic amenities. These initiatives carry a very strong equity lens – a lens that alludes most mainstream relief efforts in India today.

Shailesh Kumar, a PhD student at the University of London, is coordinating the supply of 100 oxygen cylinders to rural India, recognising that 70% of the rural Indian population has no constant supply of electricity, and therefore, cannot use oxygen (O2) concentrators, which need a constant power supply. These oxygen cylinders are intended to serve Bahujans, including the NT-DNT (Vimukta) communities. 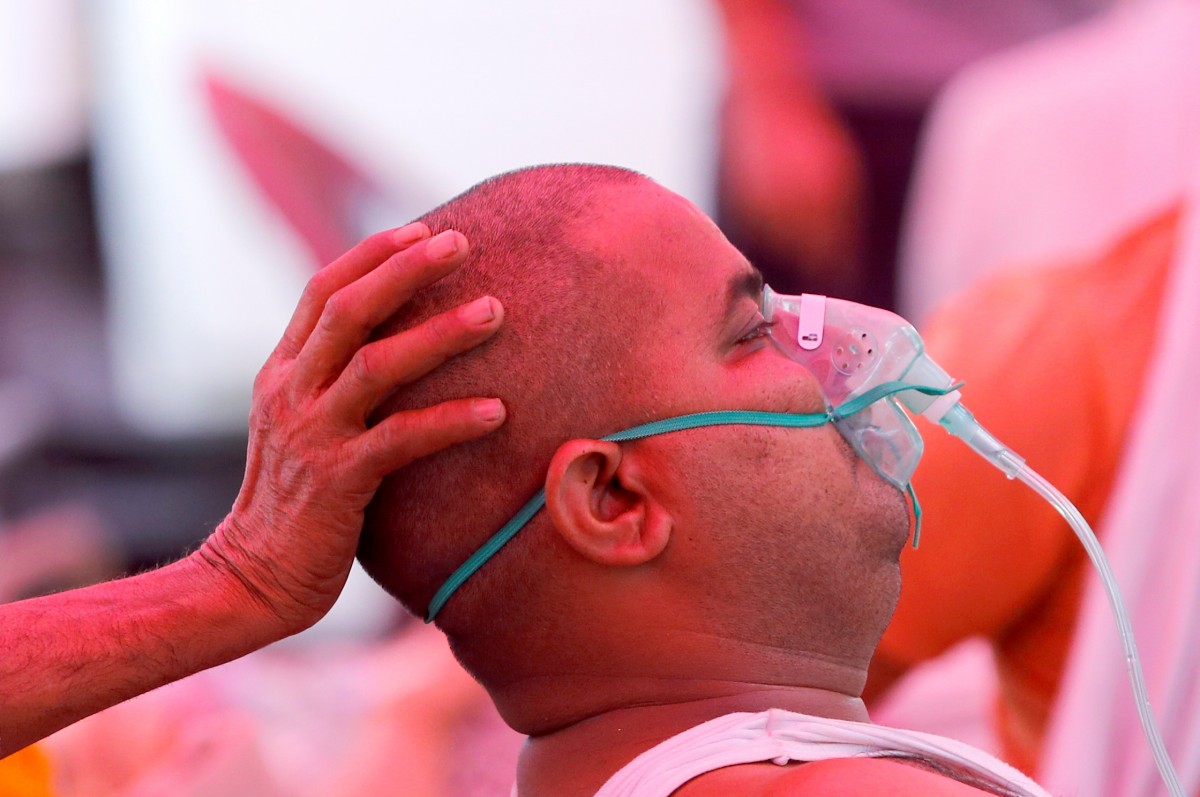 A man with a breathing problem receives oxygen support for free at a Gurudwara (Sikh temple), amidst the spread of coronavirus disease (COVID-19), in Ghaziabad, India, May 3, 2021. Photo: Reuters/Adnan Abidi

Similarly, Project Ummeed focuses on Muslim-dominated neighbourhoods in Delhi where development indicators are abysmal, and they are all microcontainament zones with very high COVID-19 positivity rates. The unstructured and hyperlocal nature of these initiatives has allowed them to be agile and responsive to the needs of families. From direct money transfers, to ration, cooked food and even medicines and cylinders, these volunteers are able to service needs in ways that work best on the ground.

It is also important to note that these efforts are struggling to raise money since these initiatives often have little by way of organised support. With celebrity fund raisers and other mainstream efforts occupying a lion’s share of the media attention, most of these founders are dependent only on individual contributions from within the networks they can access.

“Each mobile kiost costs only Rs 30,000 but to raise even 30 lakhs for 100 such kiosks will be extremely challenging,” said Chandrajeet. Smaller groups lack the marketing acumen and platform to raise funds and get attention from philanthropists – this classic ‘barrier to capital’ paradigm further widens inequity in the development sector today.

One way to address this would be to increase the networks and amplify the fundraising potential of these initiatives. For those looking to donate, there might be no easy answer but to be more aware of the unconscious biases that come into play when we consider donating and fundraising. It must lead us, at a deeper level, to question how equity operates in a sector intended to redress this very problem.

Niloufer Memon is a strategy consultant at the global social impact advisory firm in Mumbai. She has worked with philanthropists and non-profits across sectors including public health, education and financial inclusion. Shalmoli Halder is an impact investing professional based in Delhi. She works across  social issues including land, housing and migrant worker rights and welfare.